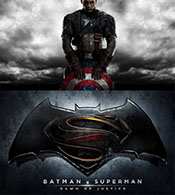 I'm a big fan of the Planet of the Apes series. While I will fully admit the first movie in the original series was a little slow in places, it was a thoughtful look at humans on an alien world a lot like our own, and the tragedies that came from a xenophobic attitude. Scathing towards religion and belief, its a very political movie (which, really, is to be expected from a sci-fi film made in the 70s). Plus, everyone is by now familiar with the twist ended ("DAMN YOU ALL TO HELL!"), but that doesn't mean the film lacks in resonance even now.

The original film touched off a series of varying quality where the high marks far outweigh the lows:

After the original run of movies, there were several attempts to revive the franchise:

Of course, if you're looking for other fixes of Apes, there's the original book (along with many, many spin-off novels based on the movies, TV shows, reboots, three-boots, etc). Marvel and IDW have also each put out Planet of the Apes-based comics, sometimes related to the movies and sometimes treading new ground. From what I've seen the comics are competent but not amazing.

When Rise came out, the general consensus was that that it would suck. It was a reboot that ditched the original continuity (while also, thankfully, ignoring Tim Burton's terrible, cinematic shit-sandwich), but the last time that was done (fuck you, Tim Burton) the movie was... have I said bad yet? It was bad. Very, very bad.

And yet, Rise rose (drum-riff) to the occasion. Sure, some (most? all?) of the science behind the apes was flawed (supposedly viruses don't work that way -- who knew Hollywood could get science wrong?). And, sure, James Franco can't act his way out of a paper bag (the only credible thing Franco can play is a stoner, and then, of course, it's not really acting). But damn if the story of Caesar, the brainy ape, isn't sad and compelling. Andy Serkis gets a lot of credit for his motion-capture acting, and Caesar is his finest work to date.

Plus, just watching the apes rise up (drum riff) and gain their freedom is one of the most thrilling sequences in cinema in quite some time.

So how does Dawn of the Planet of the Apes fair in comparison to the previous flick? Pretty good. The scope doesn't feel as big (the apes vs. one small bad of humanity), and the story is a bit more predictable (apes and humans don't get along? really?). But Caesar is as compelling as ever, and while the story isn't awe-inspiring, it's solidly told and well produced. I wasn't surprised the way I was in the previous film, but I enjoyed myself immensely and rooted, quite often, for the apes.

I think, of all the bits of the movie I liked, the one thing i respected most was that the humans weren't all just bad guys. It would have been easy to have us root for the apes in the face of oppressive humans (Conquest did that, and it's a great movie). But here, most of the humans are nuanced, and you get why they're acting the way they do (even when they're dumb schmucks that should know better). It's hard to root against the humans, even though it's called the Planet of the Apes. It's their planet now (or will be soon), and we're all on borrowed time.

So yeah, I liked Dawn. it's not my fave of the series (that is probably Rise right now), but it's great (with just the right amount of popcorn while still having a bit of drama). Fans of Apes will well enjoy the film.

I'd like to think it was my post that showed them the error of their ways, so I'm going to state exactly that:

Under pressure from the Jewpacabra, DC Comics has moved their summer event move, Batman v Superman: Dawn of Justice, up six weeks. Sources close to the studio state that it was the Jewpacabra's insightful wisdom that showed DC the error of their ways. In the future, the plan to consult him heavily in all their theatrical film decisions.

To his credit, the Jewpacabra has stated that he will not go mad with his new-found fame and power. "Now that I have an era at Warner Bros., I look forward to aiding them with their other franchises. The Matrix is in dire need of a reboot, and I think I'm just the man for the job.

The Matrix: Shadow Net is due out Summer 2018. Probably against some Marvel movie.

Seriously, WB, I have a Matrix movie in me. Gimmie a call sometimes and we'll talk.