How Does One Become a Butler?

I wasn't a fan of Gotham. That series, which ran for five seasons on FOX, right up until this series launched effectively, was a prequel tale of Gotham city without the BatmanOne of the longest running, consistently in-print superheroes ever (matched only by Superman and Wonder Woman), Batman has been a force in entertainment for nearly as long as there's been an entertainment industry. It only makes sense, then that he is also the most regularly adapted, and consistently successful, superhero to grace the Silver Screen. around to help. The troubles of Gotham City are what inspires young Bruce Wayne to pick up the cape and cowl and become a superhero, but the problem that Gotham ran into was that without Batman how do you tell an intriguing story about Gotham City. Batman inspires the villains as much as the villains inspire Batman and if you take one element away you kind of miss the whole point of the story. 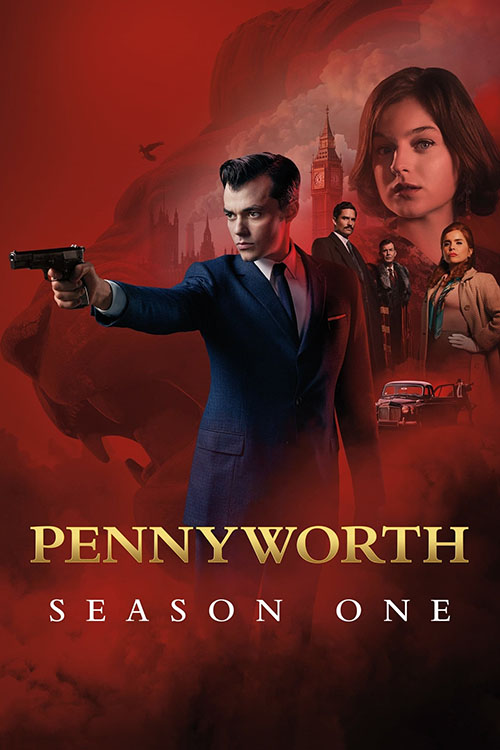 Well, Gotham missed the point most of the time, honestly. It was just a truly awful show on all counts save one: Sean Pertwee played such a fantastic Alfred Pennyworth that he almost made that part of the show watchable. When it was announced that a spin-off focusing on a younger Alfred Pennyworth was in development, you had to think there were worse ideas. Removed from Gotham (and Gotham), this show could find its own tone and style and become something better than its source show.

That was the hope, at least, and the first couple of episodes of the show do actually make you think the developers learned their lessons from Gotham and found a new and interesting angle to tell stories. But then, very quickly, it becomes clear what kind of show the developers wanted to make. Sure, it's not Gotham but it's not fresh or interesting; it's a crass and stupid version of Guy Ritchie and Matthew Vaughn films (those movies already being pretty crass and stupid). It has an interesting angle and a game cast but this show simply can't find a hook that actually works, long term, without degenerating into the same kinds of stupidity its parent show suffered from.

Having served in the Queen's Army since he was 16 (rising in the ranks of the SAS and trained to be a consummate killer), all Alfred Pennyworth (Jack Bannon) wanted was to set up a life for himself his way, free of his past of violence and death. Working as a bouncer in a nightclub, Pennyworth wanted to get his security company up and running and make a name for himself. He had a nice girl, Esme (Emma Corrin), a couple of good friends, Bazza (Hainsley Lloyd Bennett) and Daveboy (Ryan Fletcher), and the prospects of a new life ahead of him. Then, due a misplaced business card in the hands of one Thomas Wayne (Ben Aldridge), Alfred gets mixed up in a world of shit.

It seems that Thomas, despite coming off as a wealthy playboy, was secretly working for the CIA, stationed in England to uncover a whole conspiracy afoot. When the members of that conspirator group, the Raven Society, try (and fail) to kill Wayne, they end up thinking that Pennyworth is one of his conspirator. They kidnap Esme, hold her ransom, and wait for Pennyworth to bring them Wayne. Instead Pennyworth, and his mates, bring a world of pain and violence. This gets them the notice of both Wayne as well as Martha Kane and the group she works for, the No Name Society. Suddenly Pennyworth is working for one group, paid well to perform espionage as he gets deeper and deeper into the dark side of England's underbelly. 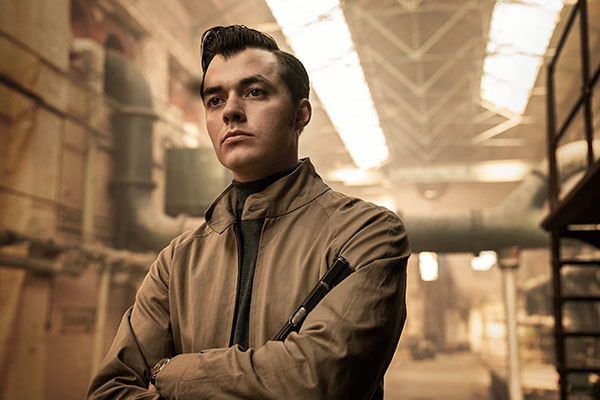 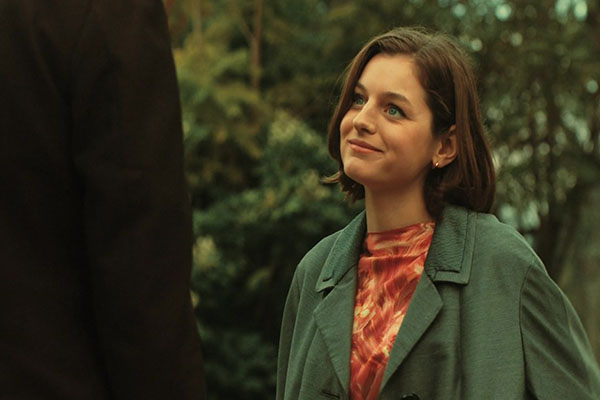 While there's a lot of stuff I could easily grouse about in this show one thing I really want to highlight first is the performance from Bannon. It's obvious his character was modeled after Michael Caine's Alfred from the Dark Knight trilogy produced by Christopher NolanMade famous when his second film, Memento, became an art-house hit, Nolan became a household name with his Dark Knight trilogy, quickly becoming one of Hollywoods biggest directors.. That's the best version of Alfred on screen and a good version of the character to work from, and Bannon nails it. It's clear he studied the performance, learned the accent, got all parts of the character down because his Alfred is spot on. Whatever ails the show may have (and they are numerous) Bannon does his best to make the central character of the show work.

The issues really come from the fact that the show itself doesn't quite know what it wants to be. It presents itself as a a cloak-and-dagger spy show, one where each week Alfred has to infiltrate some group, perform some mission, and come out the other end because he's smarter and better than all the other agents he's working against. The first few episodes of this show present this kind of world and it's pretty good. Soon enough, though, comic book elements begin to work their way in, like the Raven Society and the No Name Society, and the world becomes vastly more heightened and less believable and the show starts to crumble apart.

Part of the problem is that we don't really understand either of these groups. Are they political parties? Underground criminal groups? How do these factions actually work within the larger British society? In function they've kind of a mishmash of ideas, both secret and covert groups as well as public political institutions, but it's not really an idea the show knows how to handle properly. Considering the show doesn't want to actually delve at all into politics, despite the political nature of its story, they groups are left vague and undefined, working more as replacements for criminal gangs in the Gotham to come than any structured entity that actually could have existed in 1960s England.

Beyond that, the tone of the show shifts from intriguing espionage to a cartoony form of comic story telling. Gotham also had this issue, quickly leaving grounded storyline behind so it could go more and more over the top. This series does that too, ditching the tone of a 1960s James BondThe world's most famous secret agent, James Bond has starred not only in dozens of books but also one of the most famous, and certainly the longest running, film franchises of all time. or Jason BourneLost without his memory, but bearing a particular set of skills, Jason Bourne has to figure out who he is and just why everyone seems to want him dead. for something more akin to Kingsman: The Secret Service (and, once our lead fucks the Queen of England, it gets just as stupid as that film well). The show pitches wildly between tones and ideas, never settling or finding proper ground to stand on, and by the middle of its first season it's long ditched the intriguing show it could have been for something more violent and less interesting. 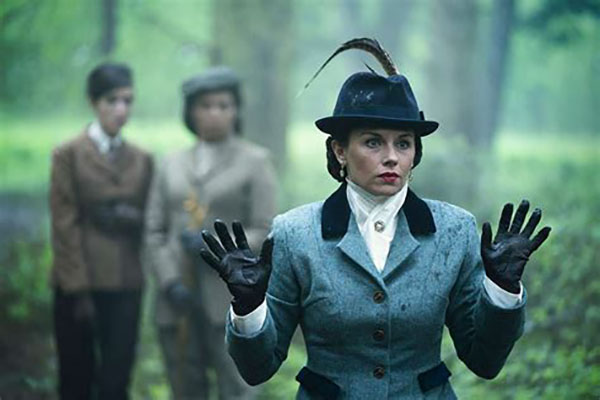 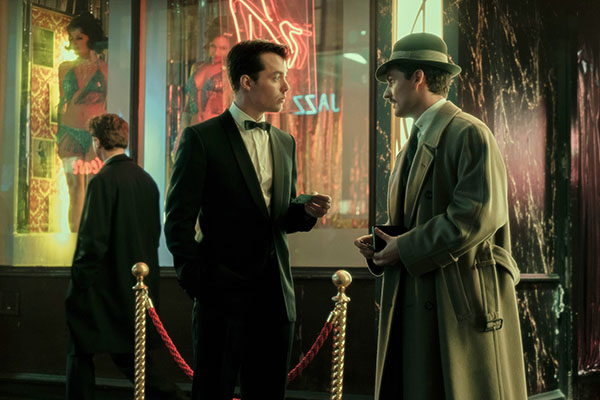 Beyond all that, there's one very big question looming over the series: what is rich playboy Thomas Wayne doing in this series? For that matter, what is rich socialite Martha Kane doing here either? They both should be back in Gotham City, with Thomas becoming a doctor and running Wayne Enterprises. What about either character screams them being covert agents in England? I get Pennyworth eventually needs to work with (and for) them, but the way they are shoehorned into the show makes no sense (and, frankly, the show never addresses it either).

There's is a series here that is quite watchable, powered largely by Bannon's performance. I like his Alfred, along with many of the other characters on the show, and because of the actors I was able to get through the first season. They're a charismatic bunch that can say all their bad dialogue, go through their dumb storylines, and make it feel natural despite itself. But a good show this is not. It would need a massive rewrite (and retcon) to actually function properly, and even then I still don't see how the show can keep anything grounded enough that these characters could eventually go back to Gotham City and resume the lives we know they're meant to have.

As a dumb, silly show about shooting and death Pennyworth vaguely works. As a show that's supposed to actually show us the early days of Alfred, Thomas, and Martha, as well as the world they lived in before going to Gotham City, though, this is a real dud. It's a tonal mess that never gets its shit together. What's most surprising to me is that this show warranted more than a first season as I would have expected this to get canceled quickly. But I guess that means I have to review that season as well... and the further adventures to come.