My plan for this week was to come in and review first Birds of Prey (and the Fantabulous Emancipation of One Harley Quinn) first and then follow up at the end of the week with Joker. It seemed like an interesting way to review these films, to compare and contrast the two since Joker and Harley Quinn have been intertwined together since Harley's creation in Batman: The Animated Series. What I didn't expect was just how much of a contrast there would be between the two films. 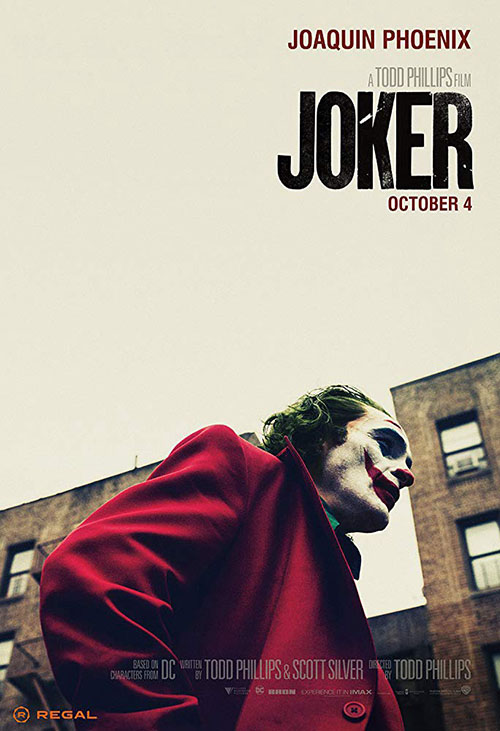 On their face the two films might seem similar if all you do is read the barest minimum of a description: clown faced criminal builds themselves up from no one while finding their inner power and, just maybe, creating a movement. But where Birds of Prey is hopefully, Joker is dour and cruel; where Harley's adventure ends with a hopeful note, Joker's is harsh and cruel and unrepentant. It's the reason why Birds of Prey is considered a fun and delightful romp for the DC Extended UniverseStarted as DC Comics' answer to the MCU, the early films in the franchise stumbled out of the gates, often mired in grim-dark storytelling and the rushed need to get this franchise started. Eventually, though, the films began to even out, becoming better as they went along. Still, this franchise has a long way to go before it's true completion for Marvel's universe. while Joker was general reviled by critics even as droves showed up to see it in theaters. Of course, the Joker does have drawing power.

I can understand why audiences showed up for Joker. Beyond giving the titular character his own film (something some fans have wanted for years, this despite the fact that, in this reviewer's opinion, Joker works best as a foil for BatmanOne of the longest running, consistently in-print superheroes ever (matched only by Superman and Wonder Woman), Batman has been a force in entertainment for nearly as long as there's been an entertainment industry. It only makes sense, then that he is also the most regularly adapted, and consistently successful, superhero to grace the Silver Screen.), it's hard ignore that the story of the film touches upon the issues of today (which is to the film's credit). Joker (or as he's know for most of the film, Arthur Fleck, played by Joaquin Phoenix) is a mentally unstable man keeping it together with hope and medication. He spends his days as a clown-for-hire while at night he tends to his mother and dreams how making it big as a stand-up comic. He has a host of issues that get in the way of his dream (not the least of which is that he's just not funny), plus life itself is basically out to get him.

First off, his job is on thin ice with more than one complaint lodged against him because people feel he's weird and creepy (which, to be fair, he is). He also has no friends and no other relationships outside his mother giving him little rooting him to the world. Plus, Gotham has turned into a mean and nasty place with just about everyone out for themselves and income inequality drastically on the rise. It all comes to a head for Arthur (coming home from work in full clown makeup) when a group of guys on the subway jump him, beating the crap out of him, so he pulls a gun and kills them all. This sends Arthur spiraling but also touches off riots in the city, like a spark to a mound of kindling. Soon people are charging through the streets in clown masks, making themselves all part of this new revolution. Has Arthur started a movement to be proud of or is he just another nasty person feeding the rot of the city?

Joker is truly a one-man show, resting fully on Phoenix's shoulders. Whatever qualms I have with this film (and they are numerous), I will credit the actor for getting into the mindset of this version of Joker. Arthur is a troubled and disturbed man and it takes a particular kind of performer to pull off a role like this. I don't particularly care for this version of the Joker but Phoenix is able to embody this damaged, broken person. It's a tough performance to watch but it is an honest one. 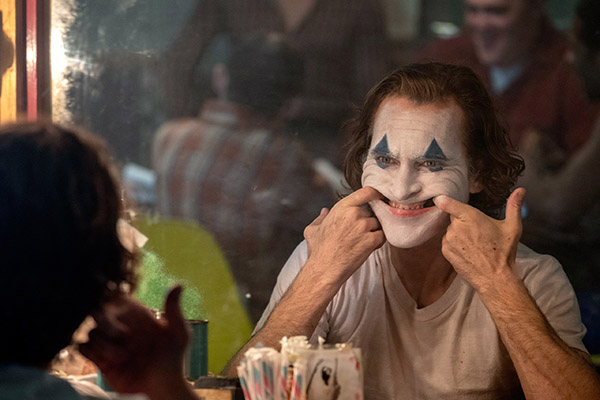 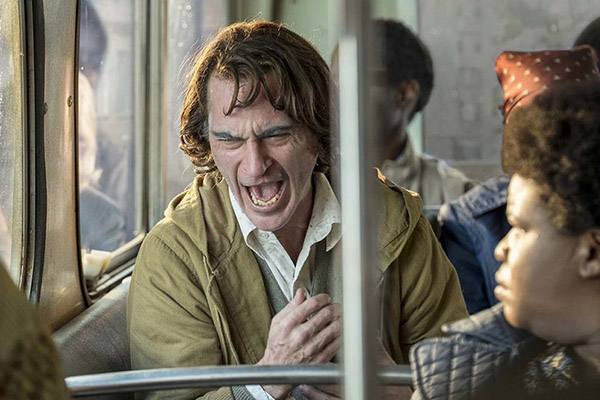 My struggle with the character, though, is that he's not an enjoyable character to watch and that's all down to the story the movie is trying to tell. Joker, in all media, is about as far removed from a protagonist as you can get, so the film has to jump through narrative hoops to give us a character that has an arc (the Rise of the Joker, if you will) while still trying to give us the beats of a protagonist. But to turn Arthur into an unrepentant killer (you know, the Joker) he basically has to start off as an anti-hero and morph into the antagonist by the end of the film. That means that instead of having a character we can realistically bond with we get someone that steadily slides into his own unredeemable id.

His own descent into depravity comes at the same time that Gotham itself slides into the abyss. This is supposed to act as a reflection: Arthur is just showing the true sickness at the core of the city. That would work if there was some connection between Arthur and the rest of the city; if Batman, for instance, slide deeper into his own psychosis, the hero losing his way as the city crumbles and rots, that would be a dichotomy that worked. Here, though, Joker isn't a symbol for Gotham, not until he's already become the villain. He's not a reflection of its rot but more a symptom. When he goes bad the vibe is that he's always had the darkness in him and because he lived in Gotham it let him be his worst self, not that his worst self then shows Gotham's own decline after. The parallel doesn't work.

Maybe this idea of Joker and Gotham being intertwined would have worked better if Joker had a larger connection to the rest of the city. If he were a city councilman or one of the stock traders, someone that could explore all sides of Gotham and treat it like another character, then we could develop a connection to the city. But Gotham isn't a character here, just a backdrop, so has Joker's influence spreads we don't see it from a larger angle. We don't get a perspective of the city anywhere outside of Joker's head (and, as we see in the film, he's an unreliable narrator). It's hard to know or care about Gotham and that weakens the dynamic the movie (might) have been trying to setup.

It's a tragedy, really, because the movie clearly wants to talk about income inequality and raise points about how corruption comes from the top and slimes its way down. It wants to say that a charismatic leader can touch a revolution, that all it takes is a spark to cause people to turn on their elected leaders and look for something new. That's a message that could resonate in our current political climate. But at the center of it all, the person everyone turns to is Joker, a violent, homicidal sociopath he can't even figure out what's real or now. That's so far outside of what is currently going on in the real world that the whole message of the movie is undercut. It's a movie that requires any other character at the center of it all instead of Joker, or a Batman that can balance out the perspectives. Joker cannot carry a movie like this; he's the antagonist, the guy you turn away from, not the hero of his own story. He makes everything worse, not better. 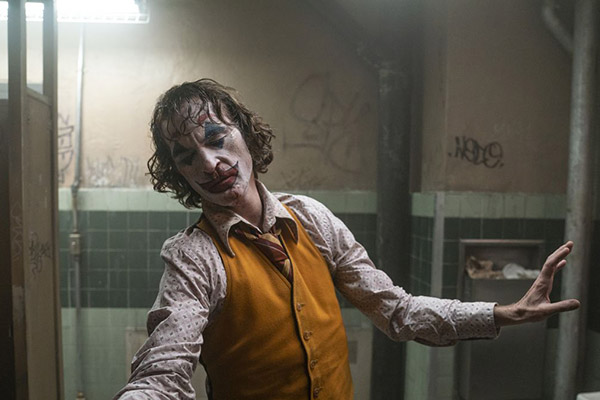 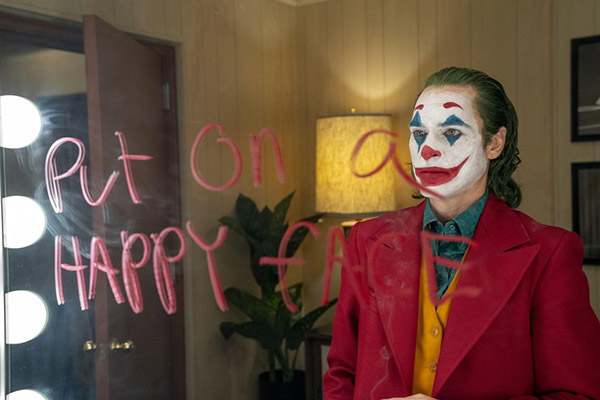 The biggest issue with Joker is that he doesn't take responsibility for anything. When he's attack by the guys on the subway and shoots them, it was self defense; they were laying into him with a royal ass-beating and he could have made the justifiable argument that he feared for his life. But instead he runs, he hides, and then he takes credit for it like this was some grand thing he did. He thinks that killing those around him is a good thing because they're a cancer and he's the cure. He even goes on television and proclaims that the city is rotting, that there's no way for the common man to get ahead. It's the world that's against him which is why he doesn't have a job, a life, or a woman to love.

I get what the movie is trying to saying, I really do, but the tone of it doesn't work. The points Joker raises would be great if they came out of any other character's mouth. From this version of Joker, though, they sound like the rantings of an MRA incel. He's not a hero, he's a whiny asshole living with his mother who's mad at the world because he can't get his big break. The trouble is outside you, Joker, not within, and the movie would be better if the lead character could figure that out. But if he did, if he didn't gleefully enjoy the killing and the violence and the chaos would he really be Joker?

This is why I hate Joker so much and would rather go back and watch Birds of Prey again and again if I only had a choice between these two. Joker is an ugly slog of a movie whereas Birds of Prey is bouncy and fun and finds hope and redemption for it's central players. Sure, at the end of the piece Harley is still a villain but, even by her own words, she's a terrible person just trying to be a little better. She has the self-awareness to know that she should work on herself. Joker never learns that here so that, by the end of the movie, when he gets his "happy" ending (such as it is) you realize that this character will never, ever own their problems. And if that doesn't make you sad for all the other little incels that hold Phoenix's Joker up as a hero, I don't know what will.