Love in the Time of Adam West

Batman '66 and Batman: The Movie

In the 1960s, another Batman production was thrown together. This TV series had little to do with the two serials that came before it, introducing the general public to the concept of the "reboot". Featuring a mix of drama and camp, not entirely unlike the older serials but this time at least self-aware about it, the show was designed for children, giving them plenty of humor and thrills to keep them entertained. 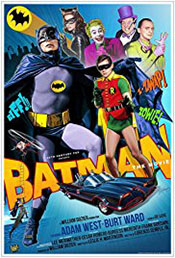 Batman starred Adam West as the titular hero and Burt Ward as Batman's ward, Robin (Ward as a ward... I'm sure someone has pointed that out before). The two heroes worked (as authorized agents of the Gotham P.D., complete with a "Bat-Phone" on a direct line to City Hall) to protect their beloved city from the worst the criminal underworld had to offer (the usual jokesters, riddle-askers, people named after animals, and elaborately-dressed thieves). While doing so, they created a host of conventions that the Bat-franchise has tried, ever since, to downplay or outright ignore (such as the catch-phrase "Holy whatever, Batman!").

The series did owe a lot to the serials that came before it, even if those serials didn't exist in the same continuity. Along with a similar tone to those movies (campy-serious), the show made regular use of cliffhangers. Movie serials (such as the 1940s Batman and Batman and Robin) would have each episode end on a cliffhanger, usually with the hero in some dastardly situation that he was sure to never escape. Viewers would sit on the edge of their seat, wanting to know how the hero survives and, thus, would dutifully show up the next week for the next amazing adventure. Of course, the hero would find some easy way to get out, and then cycle would begin again.

Similarly, the TV series used the cliffhangers as a key element of the first two seasons. The show ran twice-a-week, with the first episode featuring the hero (Batman or Robin, although I seem to recall Robin getting into a lot of stupid situations throughout the run) ending up in some situation he was unlikely to escape from... only to then escape at the start of the second episode that week. Naturally, this kept the kiddies sucked into the story so they'd come back for each exciting conclusion. 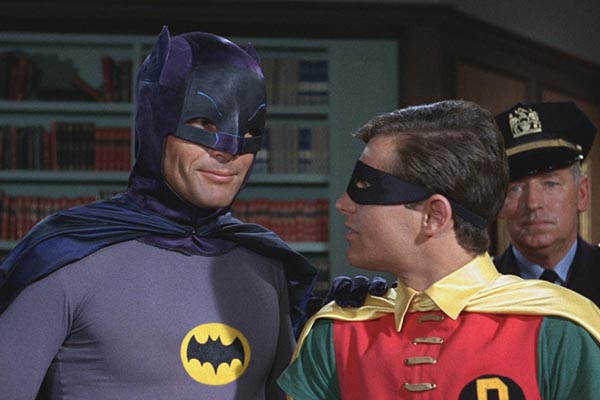 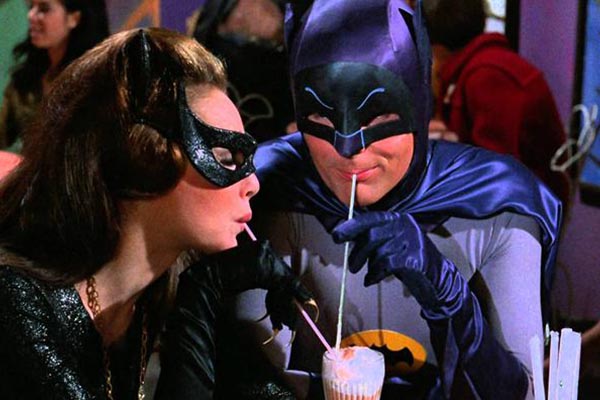 The show was successful enough in the early going to last three years and even spawn its own movie during its initial TV run. However, while the show started off as a clear mix of drama and comedy, after the first season it drifted more and more into the realm of over-the-top camp. This eventually did lead to the show's cancellation -- as it got ever campier, the viewers wandered away. By the time of the third season, the show had been pared down to one episode a week, ditching the cliffhanger format. Smaller and smaller budgets were allotted for the episodes, the viewers continued to flee, and the writing was on the wall for the series.

Interestingly, after one successful season of Batman '66, the producers decided to put together a movie. Production started right at the end of the first season, and within three months the movie was out and in theaters -- a feat modern Hollywood would never be able to achieve (and, when you consider the need to get as much merchandise out as possible for a film now, I doubt Hollywood would even want to create a movie this quickly now).

As with the series, the movie stared Adam West as Batman and Burt Ward as Robin. Many of the other actors from the series returned as well, such as Alan Napier as Alfred, Cesar Romero as The Joker, and Burgess Meredith as The Penguin. Additionally, many of the sets, costumes, and props made the transition, giving the movie the feel of a long episode of the series -- if it had been chopped into three or four parts and shown along with the TV series, it would have been impossible to tell the difference.

Despite moving to the big screen, many of the conventions of the series carried over. The campy humor that became the series' trademark was there, as were all the weird gadgets and cliffhanger-y situations. The movie focused on the Joker, the Penguin, the Riddler, and Catwoman, using a newly stolen dehydrating machine in an attempt to take over the world. How? By dehydrating the members of the United World Security Council (think the U.N.). Honestly, the plan wasn't too well thought out as its never really clear what the end goal is (are they in it for the ransom money, or power, or chaos, or what?). 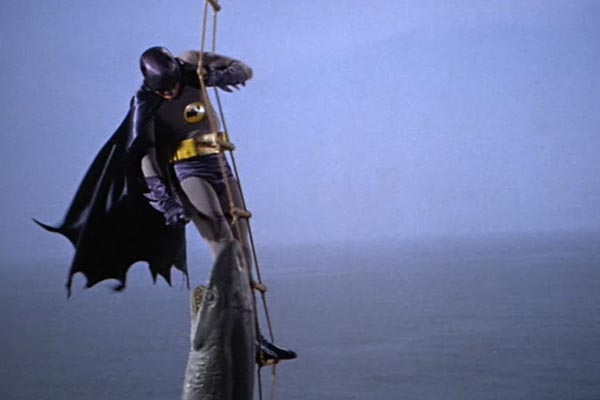 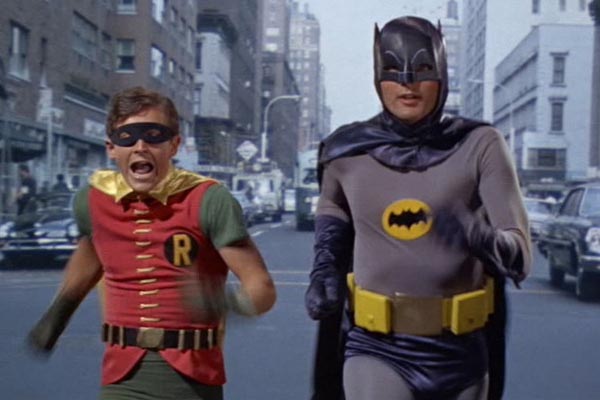 The ridiculousness of the whole production is part of why the movie is as successful as it is. You just can't take it seriously, and each new madcap sequence Batman and Robin get into just goes along with the silly atmosphere. If it actually wanted to be a serious adventure, it wouldn't have worked (in this way), but it's just a fun, stupid ride that makes you go, "why did I just watch that," even while you're itching for another time around. While the TV series could drag on and get pretty dumb, the movie was just the right mix of silly fun.

Although the live-action TV show went off the air in 1968, that wasn't the last time Adam West and Burt Ward would play their most famous roles. In the 70s the two would reprise their characters for the Filmation animated "sequel" series, The New Adventures of Batman. The cartoon tried for a similar campy spark as the original show, but the creators weirdly included in the mix Bat-Mite, an all-powerful magical being earlier introduced in the comics. Bat-Mite proved to be an obnoxious, annoying character, one audiences did not respond well to. The cartoon was cancelled after only a few months.

The animated duo would return for additional appearances in Tarzan and the Super 7, Legends of the Superheroes, Super Friends and the Super Powers Team, ending the run of shows in 1985. This, effectively, gave Adam West the title of "longest-running Batman", especially when you consider the two recent direct-to-DVD releases from DC, 2016's Batman: Return of the Caped Crusaders and it's 2017 sequel, Batman vs Two-Face. There is a reason that even though the classic Batman '66 is often mocked for its tone and style, Adam West was beloved for his role in it. For many, many people he was their Batman, and he could claim that title for decades. 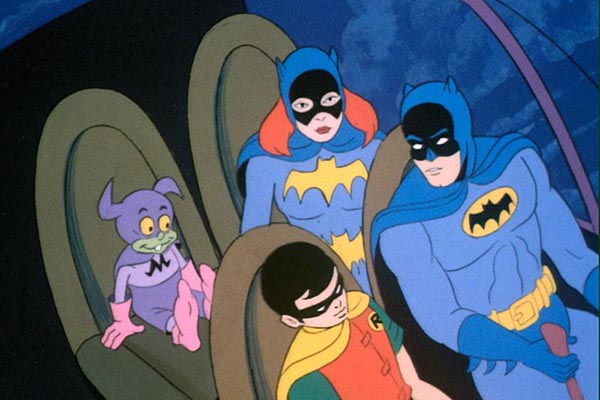 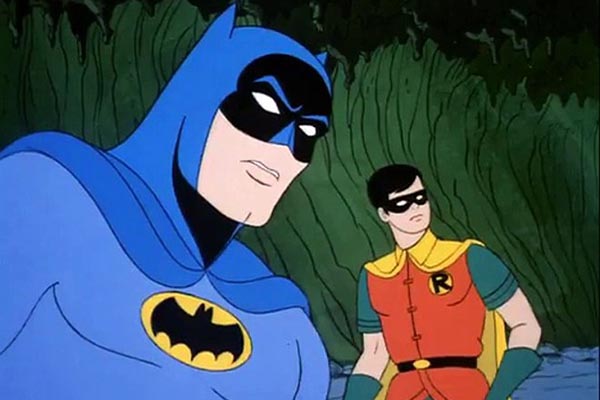 Starting next week we'll continue our deep dive of Batman Cinema with a double-dose of the Tim Burton films.