Batman: Return of the Caped Crusaders

As an fan of DC ComicsOne of the two biggest comic publishing companies in the world (and, depending on what big events are going on, the number one company), DC Comics is the home of Superman, Batman, Wonder Woman, and just about every big superhero introduced in the 1930s and 1940s. likely know, the company is fond of revisiting its past. Despite all the times the comic publish has rebooted its own continuity, DC loves to reference its old stories, to resurrect old versions of its characters to exist on separate world so we can see them continuing to have new adventures. That's the basic idea behind Batman: Return of the Caped Crusaders, the first of two movie to feature the return of the Batman '66 continuity, featuring the return of Adam West, Burt Ward, and Julie Newmar to their most famous roles. That nostalgia trip is what drives the film. 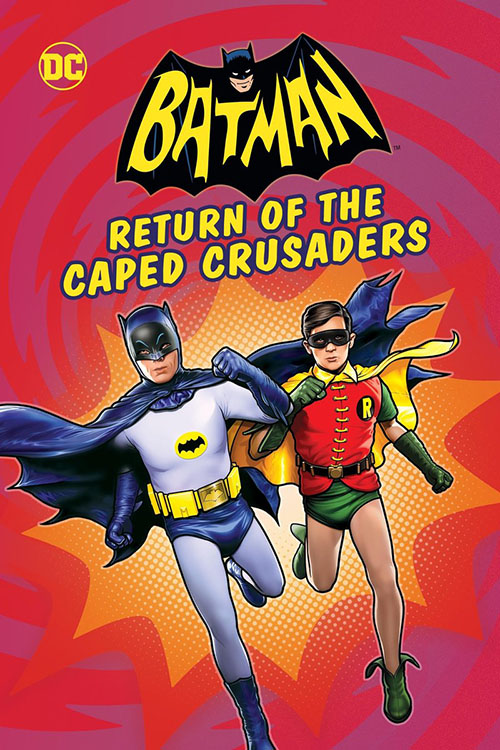 I can understand the appeal as there's something delightfully fun and campy about the 1966 series. It comes from a specific time in the Silver Age of Comics when heroes had to be lighter, safe for kids to read about without pushing any boundaries or making parents sweat. The BatmanOne of the longest running, consistently in-print superheroes ever (matched only by Superman and Wonder Woman), Batman has been a force in entertainment for nearly as long as there's been an entertainment industry. It only makes sense, then that he is also the most regularly adapted, and consistently successful, superhero to grace the Silver Screen. we saw in those old shows was safe for children, pre-approved for afternoon watching that wouldn't teach the kiddies anything bad (while the parents sat back and drank martinis while playing Bridge). Revisiting that era with a new film probably strikes a chord for all the people that fondly remember the old series. I just wish this first movie was better.

The movie finds Batman (West) and his ward Robin (Ward) continuing their lives as we saw them in the old show. The two heroes are sworn officers of the law, working for the city of Gotham alongside Commissioner James Gordon (Jim Ward) and Chief Miles O'Hara (Thomas Lennon). By day they're billionaire Bruce Wayne and Dick Grayson, but by night they fight the likes of Catwoman (Newmar), Joker (Jeff Bergman), Penguin (William Salyers), and Riddler (Wally Wingert) for the safety of the city.

When those four villains attack the variety show Gotham Palace, Bruce and Dick swing into action. They fight the villains off but aren't able to capture them. The villains manage to elude capture after a second encounter, making off with a duplicator ray. A third confrontation sees the capture of the Caped Crusaders, and though they are able to escape, Batman is scratched by Catwoman, doses with a drug that, she hopes, will make the hero her willing slave, turning him to the side of evil. That doesn't happen, but soon after Batman starts to act more aggressive, more evil, eventually turning to the dark side. Robin is forced to work with Catwoman to stop this as Batman has gone even further than she wanted. It'll take their combined efforts to save Batman from himself before he becomes the biggest villain Gotham has ever seen.

In some ways the movie is a solid continuation of the classic series. It tries for that same vibe, with the voices of West and Ward helping to ease us right back into that old continuity. Much of the setup for the movie is similar to the show -- the heroes arrive, there's a fight, eventually they get captured and then have to escape in some silly way, all before finally confronting the villains and thwarting whatever evil plan they have. That was the setup of the old episodes, with the adventures split between two days of the week, the capture acting as a cliffhanger between the first and second episode that week. If you took that template and laid it over this film you'd get four pretty event episodes, making this like a long quadruple run of the old show, stylistic flourishes and all. 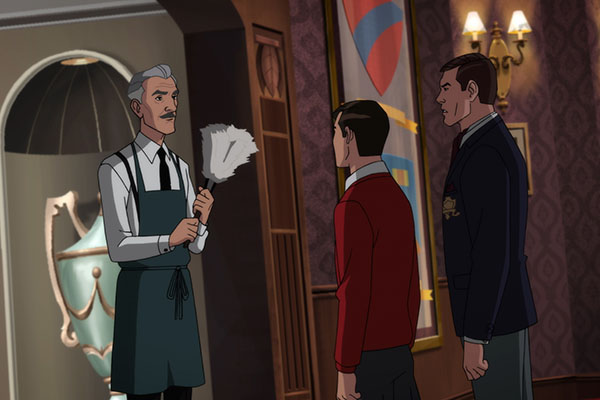 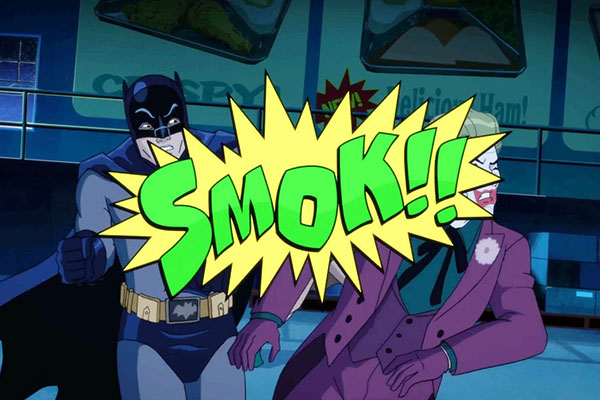 The movie does try to hit the same vibe as the classic series, with all the BIFF!, POW!, and ZAPP! fight animations you expect. It's nice to see all the classic recreations of the old villain costumes, to have the 1960s continuity continued on in a loving fashion. For fans of the old show, this film isn't a perfect one-to-one recreation but it does a decent job of getting back into that old vibe.

That said, the fact that it's not a perfect recreation is a knock against it. The animation and drawing style is, honestly, too smooth and neat. It doesn't feel like a 1960s cartoon but like the current crop of DC films with a "60s" filter thrown on. Considering the era it came out, I was hoping for something more in line with the Filmation The New Adventures of Batman that, itself, acted as a kind of sequel to the old 1960s series. This new version, while having the voices and the theme, lacks the proper level of campiness.

And considering the fidelity the series went for, copying the kinds of story beats and getting some of the original actors back, there are a few things the film doesn't do that are conspicuous. For starters, the Joker doesn't have a mustache under his makeup. Cesar Romero famously refused to shave his mustache for the part, and while this is a minor detail it some of the most famous ones for the character and it's weird the movie doesn't include it. Oddly, Cesar Romero also isn't in the film despite still being alive, and I have to wonder why he wasn't included; was this his choice or a specific decision from the producers. And, finally, although this would seem to take place after the 1960s series, there's no mention at all of Batgirl who was introduced in the last season of the original show.

The biggest flaw with the film, though, is that it just lacks energy. Although I hate to speak ill of the dead, I do think a lot of the blame here lies with Adam West as his voice work in the film is so uninvested. While Burt Ward and Julie Newmar knock it out of the park with their voice acting, West sound unengaged, like he was just there to collect a paycheck. At the halfway point, when Batman turns bad and Robin has to team up with Catwoman, the series picks up speed an energy, but that leaves a good forty minutes that are an absolute struggle to get through. I appreciated what the movie was trying for but that first half is an absolute slog. 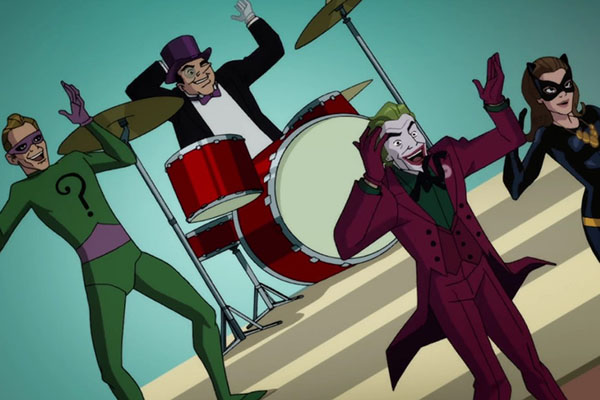 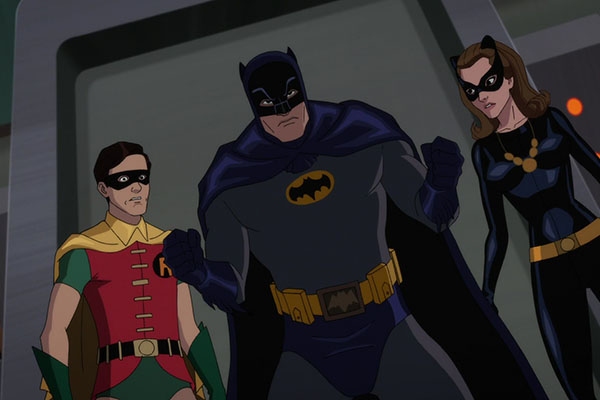 That said, the back half really is great. Although the first half play homage to the original show to a fault, really, the back half changes up the formula. Giving Catwoman more to do and making Batman the villain of his own story really does change the whole air of the piece. Suddenly roles are reversed, old tropes are thrown out, and sly jokes are made at the expense of the original show, its formula, and the nature of the original series' story. The movie finds new life and if the whole film could have had this kind of energy it would have been great.

I really do like what this film tried to do. It has a sly eye towards the source material, playing within the bounds in the first half before coloring well outside in the back nine. If the first half could have had the joyous energy of the last acts, this film could have been great. But, for that, we would have needed a more engaged West in the role and, for whatever reason, that just didn't happen. It's a pity, but hopefully West is able to do a better job in his second, and final, time back at the bat as, well, the Bat.