Yeah, That Batman Is One Bad Motha- Shut Yo Mouth!

Batman: Soul of the Dragon

Over the years and decades we've seen BatmanOne of the longest running, consistently in-print superheroes ever (matched only by Superman and Wonder Woman), Batman has been a force in entertainment for nearly as long as there's been an entertainment industry. It only makes sense, then that he is also the most regularly adapted, and consistently successful, superhero to grace the Silver Screen. depicted in a number of eras. Generally those eras are the ones the hero existed in at the time, such as the 1960s-set Batman TV shows and movie, but there have been instances of the hero being placed in other eras as part of the "Elseworlds" line of stories DC ComicsOne of the two biggest comic publishing companies in the world (and, depending on what big events are going on, the number one company), DC Comics is the home of Superman, Batman, Wonder Woman, and just about every big superhero introduced in the 1930s and 1940s., such as the Victorian era Batman: Gotham by Gaslight. 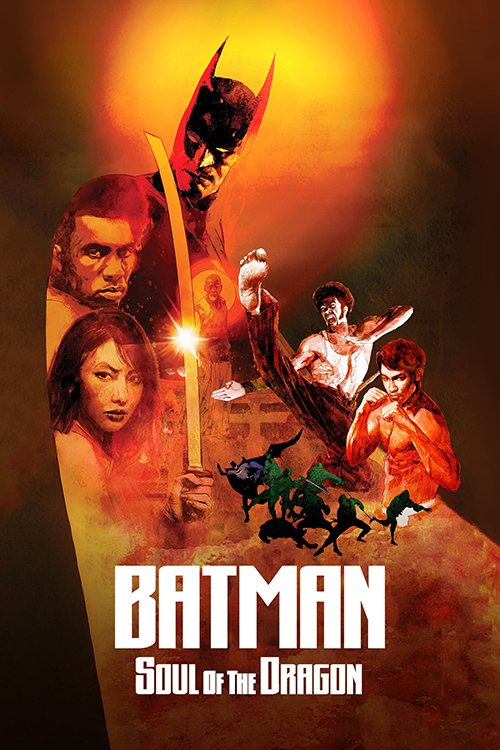 That said, Batman: Soul of the Dragon is a little bit different from those other adventures. The key reason is because this is the only adventure I can think of, at least in film and TV, that sets the Batman in the 1970s. Although Batman did have some adventures on screen during this era, The New Adventures of Batman, that was an animated outgrowth of the 1960s Adam West show and certainly felt like part of that series and not something that truly capitalized on the era it was released. It was also from children, like the Adam West show, which limited what it could do.

Soul of the Dragon gets to revel in its 1970s era, though. It feels like it resides at a cross section of all the action and exploitation films of that era, getting the funky vibes and delightful grooves mixed in with its punching and kicking. If anything produced today and be a love-letter to the cheesy action films of the groovy 1970s, then Batman: Soul of the Dragon certainly contends for that title. It does everything it can to be "of the 1970s", and its a much better film for it.

At it's core, Soul of the Dragon is just another Batman tale. We pick up with Bruce Wayne / Batman (David Giuntoli) as he's just starting out in his career as the feared "Bat Man". When an associate of his comes calling, Richard Dragon (Mark Dacascos), the two have to gather their old allies -- Kelly Hu as Lady Shiva and Michael Jai White as Ben Turner / Bronze Tiger -- to stop a threat that could destroy the world, all from a cult of snake worshipers led by Jeffrey Burr (Josh Keaton).

This is inter-cut with a B-plot about how the team came together originally, and this is where the film manages to differentiate itself from the usual "Bat-Family" media fare. This story is set in the monastery up in Tibet where, traditionally, Bruce learns the ways of fighting and the art of the shadows from the League of Assassins. Instead, though, Bruce and the other initiates are taught martial arts from the wise O-Sensei (James Hong). He's not training them to be killers but defenders, guardians of a sacred sword, the Muramasa-forged Soul Breaker, and a forbidden gate that could unlock a path to the dimension of the evil Naga. This is what the snake cult wants, and as we watch the two stories fut back and forth, we learn all we need to about the cult and why they have to be stopped. 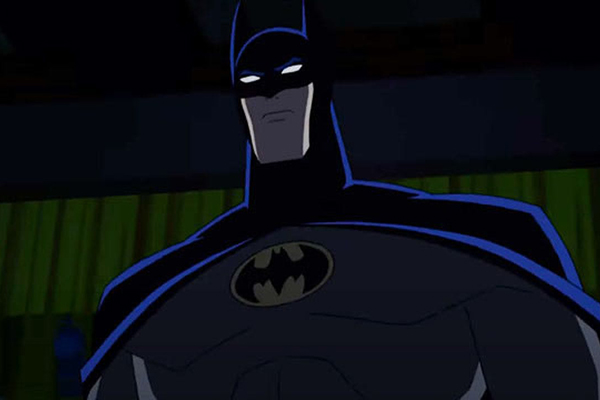 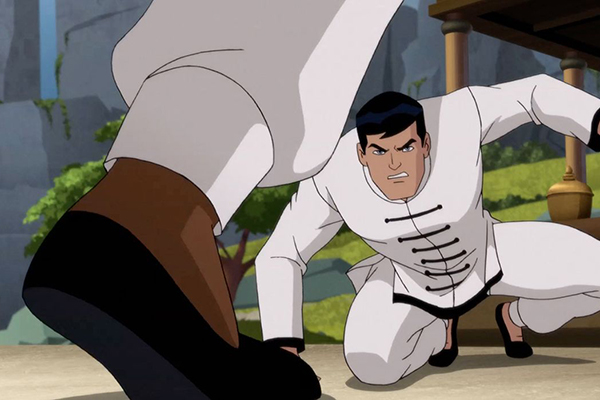 This film, frankly, gets so many things right it easily rests as one of the best Batman adaptations DC has done, and that starts with the fact that it lovingly recreate the setting of the 1970s action films. Instead of opening with Batman (who is the main draw of the film, of course), we follow Richard Dragon on a case. He works as an international spy, and acts as both an analogue for James BondThe world's most famous secret agent, James Bond has starred not only in dozens of books but also one of the most famous, and certainly the longest running, film franchises of all time., who had his own 1970s, exploitation-style adventures back in the day, but also for Kung Fu-led action films of that era. Lady Shiva gets to represent the sword-and-sorceress style films from that same period (which were also lovingly lampooned in Big Trouble in Little China), while Bronze Tiger bring in the Blaxploitation aspects of the era. Bruce, in that regard, is the token white guy.

Frankly, while I understand Batman had to be here to sell the film (and probably to get it made in the first place), he's the most awkward fit for film. His character is at odds with the aesthetic as he doesn't bring in any particular exploitation style. The film can't even parody his own adventures from the time period since, as we've noted above, he didn't really have any. Much like the comics from the era, Batman is just weirdly attached to this production but continues to be Batman no matter what goes on around him. I think the film actually would have been better with a different hero in the story, maybe Wonder WomanLong considered the third pillar of the DC Comics "Trinity", Wonder Woman was one of the first female superheroes ever created. Running for as long as Batman or Superman (and without breaks despite a comic downturn in the 60s that killed superhero comics for about a decade), Wondie has the honor to be one of the longest serving, and most prolific, superheroes ever. (who actually changed in her comics, for a time, to suit the 1970s), but that's also a minor critique.

Like Batman, we're really along for the ride as we get to experience the other characters in the film. Each of the associates, from globe trotting Dragon, to the crime boss Lady Shiva, and Bronze Tiger, have their own style, setting, and vibe that the film carries through. Along with Richard being show on a mission, we get Shiva in her crime den, watching a fight to the death play out while she sits on her throne. Then we bounce over to Harlem so we can see Tiger training kids in his dojo while smooth grooves play in the background. I loved how much the film tries to match the aesthetic of the exploitation films of the era, and it nails the vibe and style so well. That's probably why Batman doesn't as well here: he doesn't have a cool vibe to play off of in comparison.

That said, there is one other place where Batman feels at odds: all the killing. Like any good exploitation film of that era, a lot of mo-fos die here in Soul of the Dragon. This isn't an issue for Richard Dragon, Lady Shiva, or Bronze Tiger as these aren't characters that have rules preventing them from killing. Hell, between an international spy, a former international spy, and a crime boss, these three specifically have to not have rules so they could function in their jobs. When we see them take down cultists and kill the various abominations they find unleashed by the snake cult, it's just another day for them. 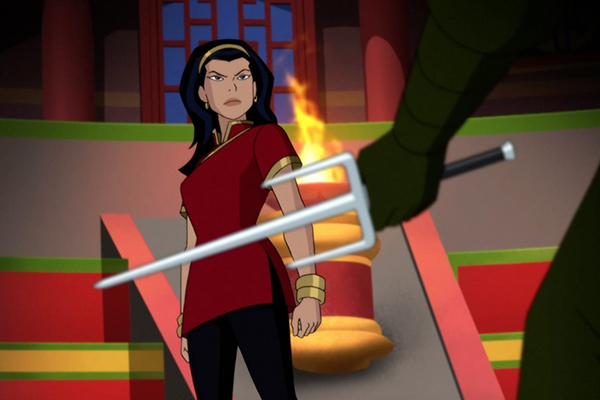 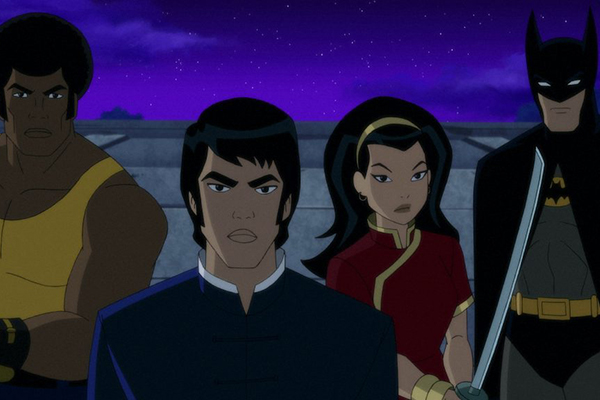 Batman, though, has rules and watching him break the neck of a cultist, or burn a sentient beast to death, seems very out of place for the character. It's very much in the style of the films of the era, mind you, so it could be a case of "when in Rome, do as the Romans do," and that goes for Batman as well. Still, having a character that didn't have such a moral "black and white" set of rules (again, I'm thinking of Wonder Woman who is more than willing to kill if its for the greater good of the world) would be a better fit here than Batman.

Still, Batman's inclusion is something you can forgive as the movie plays out. As Bruce, his background and development tie nicely into the story and the overall aesthetics and vibe work really well together. Bruce blends in among these characters and, if the film had gone for a true "Elseworlds" vibe, it could have had him go off and become Snake Man or something else, showing a "What If?" story instead of the usual Batman affair. But because Batman is here it all feels a little more awkward than it should.

I really enjoyed this film for what it was, but there was a small voice in the back of my head saying, "Batman wouldn't do this." Maybe that's a deal-breaker for you; it wasn't for me but I could easily see how another comics fan could be absolutely turned off by this. I was here for the '70s style and this film delivered in spades. Maybe next time DC can put a better character in the lead of one of these films so we don't have to go through mental loops to accept this killing dudes and taking names.