You Ruin Everything, Barry Allen

It's fair to say that on the Silver Screen, DC lagged far behind it's biggest competitor, Marvel. The DC Extended UniverseStarted as DC Comics' answer to the MCU, the early films in the franchise stumbled out of the gates, often mired in grim-dark storytelling and the rushed need to get this franchise started. Eventually, though, the films began to even out, becoming better as they went along. Still, this franchise has a long way to go before it's true completion for Marvel's universe. has it's defenders, but it's pretty easy to see that the universe stumbled out of the gate and is still trying to catch its bearings. Even if, somehow, the DCEU does recover (building off the success of Aquaman into potentially solid films for Shazam, Birds of Prey, and the like), the 'verse will still be lagging far behind the Marvel Cinematic UniverseWhen it first began in 2008 with a little film called Iron Man no one suspected the empire that would follow. Superhero movies in the past, especially those not featuring either Batman or Superman, were usually terrible. And yet, Iron Man would lead to a long series of successful films, launching the most successful cinema brand in history: the Marvel Cinematic Universe.. Marvel has had 10 successful years (and nearly 20 great movies, give or take the occasional Incredible Hulk or Age of Ultron). In theaters, Marvel is always going to have a leg up over DC. At this point it's just a fact. 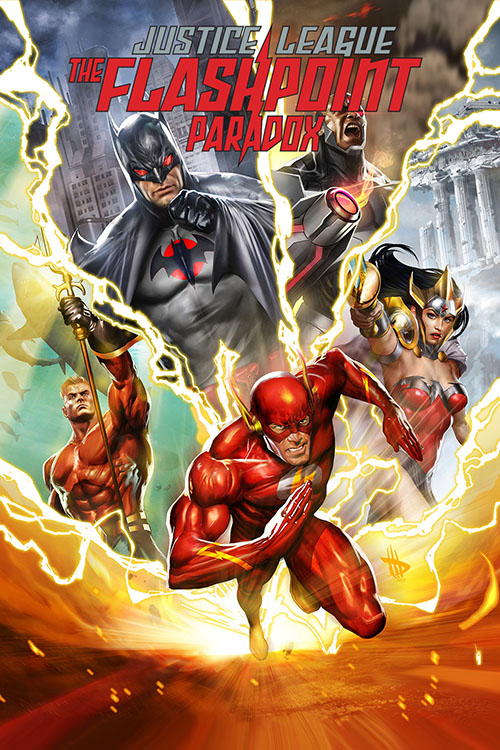 However, when it comes to the small screen, the situation is very different. DC has seen continued success on the boob tube for years, even since the Bruce Timm-led DCAU began with Batman: The Animated Series. That show lead to numerous spin-offs (Superman, Justice League, and on and on), plus movies, short films, and tons of toys. It's always well remembered by children of the '90s both for it's stylish animation and it's honestly great storytelling. Since then, multiple other DC works have done well, from the CW ArrowverseWhen it was announced that the CW was creating a show based on the Green Arrow, people laughed. The CW? Really? Was it going to be teen-oriented like everything else on the network and be called "Arrow High"? And yet that one show, Arrow has spawned three spin-offs, various related shows and given DC a successful shared universe, the Arrowverse on TV and streaming. (which has been going for seven years and counting) and a host of direct-to-video movies which have spun out their own great DC Animated Movie UniverseWhile DC Comics was amping up production on this big "MCU-killer", the DC Extended Universe they were also quietly putting together another shared movie continuity, the DC Animated Movie Universe. This series was more closely related to the comics, directly adapting a number of famous storylines to, arguably, better effect than the live-action movies could. (which is a real mouthful to say).

This animated universe is great, and so much better than the DCEU, although it honestly got off to a rock start. Now, technically I wouldn't consider Justice League: The Flashpoint Paradox the official start of the series (that would be the next flick, Justice League: War), but it does technically count (because of referenced events in Suicide Squad: Hell to Pay -- that film retconned in Flashpoint, so if we're going to run this series of films, we have to start here, the beginning before the beginning.

From the start, Flashpoint is an odd duck; it pitches us a DC universe that's already up and running with any number of heroes, villains, and the like going full bore, but it's not a universe we'd actually seen before this film. When the movie opens, the Flash (Barry Allen, voiced by Justin Chambers) is answering an emergency at the Flash Museum. He's confronted by many of his rogues, all working for Eobard Thawn / Professor Zoom (C. Thomas Howell), Flash's arch-nemesis. Flash is caught by the villains and put in a position that could lead to his death, but wouldn't you know it he'd already called for backup and soon the rest of the Justice League arrives to help him save the day. It's a big win for everyone, a moment of lightness from what could have been a very bad day.

Which, speaking of bad days, the next day Barry wakes up and finds the whole world isn't like he expects. Iris (Barry's wife) is married to someone else, his mother is alive (instead of dying when he was a kid), and, oh year, the entire world is at war with the Atlanteans and the Amazons. It's a bleak version of reality, one in which the Justice League never formed, and those few heroes that do still exist seem totally different from the heroes Barry knows. The only person that realizes there's a problem is Barry, so he has to find a way to regain his powers (which he now no longer has), build a team, and stop a war, all while figuring out what happened and fixing time itself. 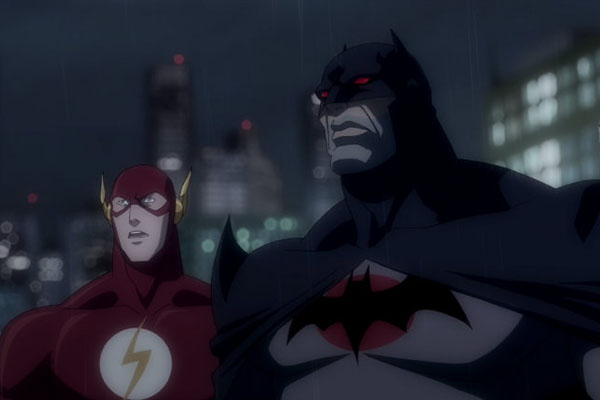 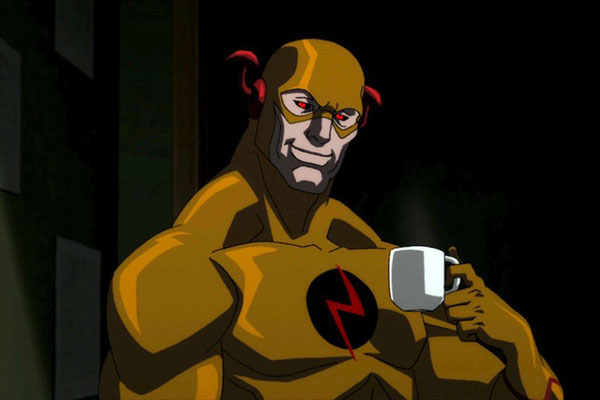 Again, as the launch of a universe Flashpoint is so strange. Obviously that's because it wasn't meant to be the start of one but just another film in a random, unconnected series of films. Before Flashpoint, 14 other direct-to-video films had come out from DC, most of the adapting storylines previously seen in the comics, such as Superman: Doomsday, Batman: The Dark Knight Returns, and Justice League: The New Frontier. If Flashpoint was meant to launch anything, it would have been a cleanup of old films to indicate to fans that, hey, everything moving forward would be a single, new continuity. Except that hasn't been the case either as DC has still released unrelated one-offs like Justice League: Gods and Monsters and Batman: The Killing Joke.

Obviously Flashpoint wasn't meant to be the launch of anything and it really shows. Compared to the movies to follow, this film is both tonally and stylistically very different. For starters, it has a very strange animation style, one that seems like classic comics blended with anime. I don't want to say it's bad looking per se (although Aquaman looks terrible in this movie), but it's certainly not attractive. It's very different from the cleaner animation style to come in later DCAMU films. It's muddier in places, sketchier even, which makes it an odd fit with everything else connected to this movie.

Worse, though, is the fact that this movie is very violent. Now, I'm all for violence in action movies when it's called for, but this film seems to revel in the dark and gritty, like a '90s era comic exploring how far it can go without the Comic Code. Blood and gore abound in the movie and just about every character glimpsed on screen will eventually die because the creators want to kill all their favorite toys. While later films in the series have their share of violence they don't revel in the edge-lord levels of depravity this film gets off on.

What really holds this film back, though, is simply that we don't have any connection to the main character. Although a version of Barry Allen / The Flash had shown up in some of the DC animated movies before this one, this very specific version of Barry is new to the series. Remember, Flashpoint was originally a one-off title adapting a 2011 comic storyline. That comic crossover worked at all because it was using versions of character established over decades of storytelling. We had a connection to the characters so when Barry woke up to find everything twisted and wrong, it felt like a gut punch to the readers as well as to the character. By comparison, this film has to spend time establishing stakes, doing a quick rundown of Barry's past just so we have context. We might understand this version of Barry in our heads, but without a few movies to get to know him we don't feel that connection. 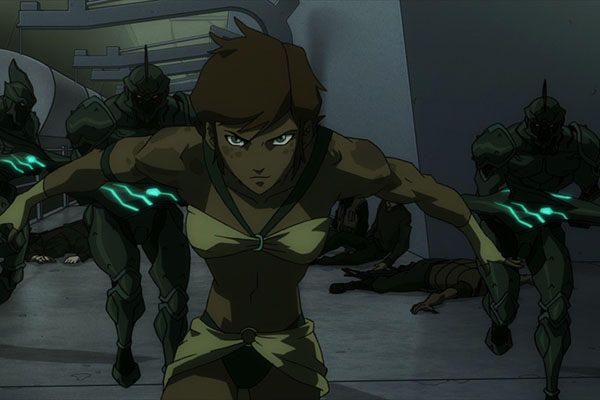 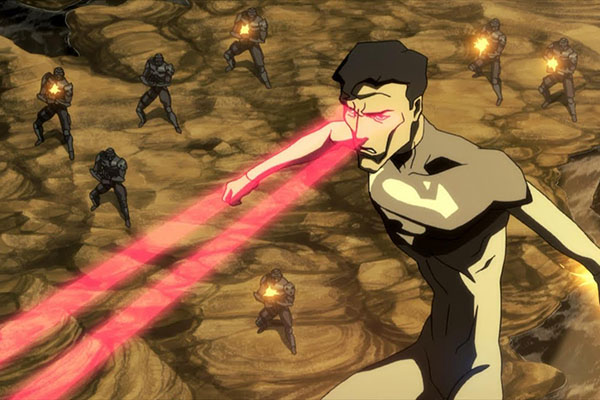 That's the weird thing about the earlier DC animated movies -- since they were all unconnected there's no build up over time to gain a greater understanding of the characters. Who cares if Barry saves his home universe or not? By the time the credits roll we'll have a new version to deal with in the next film. While that wasn't true after the fact for this movie, the retcon certainly doesn't do this film any favors. It honestly would have been better to let this film remain on its own and then, down the road, so some other Flashpoint-like reboot for the series that the new DCAMU could have built off of.

Justice League: The Flashpoint Paradox is a film with an interesting concept squandered on a universe without context. If it had remained a one-off, never mentioned again, we would have simply forgotten about it. Instead, we have to approach it as the start of a series, and on that regard it just doesn't work. Thankfully we have a second introduction to the series coming up next, and it does a better job of bringing us into this new world...