Superheroes are massive business at this point. For years the Marvel Cinematic UniverseWhen it first began in 2008 with a little film called Iron Man no one suspected the empire that would follow. Superhero movies in the past, especially those not featuring either Batman or Superman, were usually terrible. And yet, Iron Man would lead to a long series of successful films, launching the most successful cinema brand in history: the Marvel Cinematic Universe. has dominated the Box Office, to the point where now anything set in that universe is guaranteed to make $1 Bil, no matter the character (SpidermanSure, DC Comics has Batman, Superman, and Wonder Woman, but among the most popular superheroes stands a guy from Marvel Comics, a younger hero dressed in red and blue who shoots webs and sticks to walls. Introduced in the 1960s, Spider-Man has been a constant presence in comics and more, featured in movies regularly since his big screen debut in 2002. just had his first billion-dollar film, Far From Home, despite it not being the strongest Spidey film, thanks to the MCU). Every company wants to get in on this sweet superhero boom going on -- DC is attempting it in three different ways with the DC Extended UniverseStarted as DC Comics' answer to the MCU, the early films in the franchise stumbled out of the gates, often mired in grim-dark storytelling and the rushed need to get this franchise started. Eventually, though, the films began to even out, becoming better as they went along. Still, this franchise has a long way to go before it's true completion for Marvel's universe., the DC Animated Movie UniverseWhile DC Comics was amping up production on this big "MCU-killer", the DC Extended Universe they were also quietly putting together another shared movie continuity, the DC Animated Movie Universe. This series was more closely related to the comics, directly adapting a number of famous storylines to, arguably, better effect than the live-action movies could., and the ArrowverseWhen it was announced that the CW was creating a show based on the Green Arrow, people laughed. The CW? Really? Was it going to be teen-oriented like everything else on the network and be called "Arrow High"? And yet that one show, Arrow has spawned three spin-offs, various related shows and given DC a successful shared universe, the Arrowverse on TV and streaming.), so it's no surprise that, when superhero films were first really taking off, Dreamworks jumped into the pool with a humorous superhero flick, Megamind. 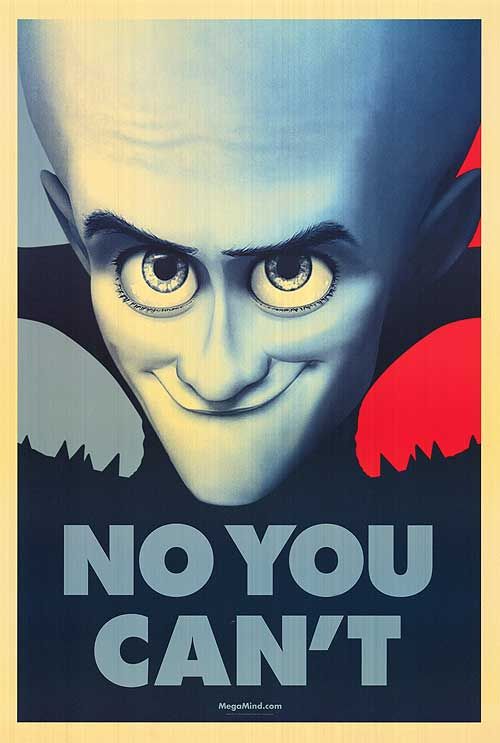 Megamind, a Dreamworks Animation film through and through (the flaws of which we'll of course address), is not considered a classic of the genre. It came out early in the boom before people would easily drop $500 Mil or more at the Box Office just because a dude with a cape was in it, and while its $322 Mil pull off a budget of $130 is respectable, it's not great bank from the theater crowd. Plus, honestly, its a superhero parody film that came out before there was enough of a genre to really have the tropes to parody. In that way it shares elements with Mystery Men, another superhero film parody that didn't quite catch the world on fire. There are defenders for Megamind (just as I'm a defender of Mystery Men), but even before we get to talking about the movie it's easy to see why the film didn't catch the world on fire: it came out at just the wrong time for what it was trying to say.

In Megamind we're first introduced to out titular villain, Megamind (voiced by Will Farrell in this cartoon movie), a blue alien first sent to Earth when he was a baby as his home world was exploding. His ship is knocked just slightly off course by the pod of another child from another world, a baby that will grow up to be Metro Man, and while Metro's pod lands in the home of a nice, rich family, Megamind ends up in a prison where the baby spends his formative years. Soon a rivalry is set between Megamind and Metro Man (both of whom, if you hadn't noticed, are SupermanThe first big superhero from DC Comics, Superman has survived any number of pretenders to the throne, besting not only other comic titans but even Wolrd War II to remain one of only three comics to continue publishing since the 1940s. parodies), and as they grow up Metro ends up sending Megamind to prison over and over and over again. We catch up with the two on their latest tit-for-tat when Megamind captures Metro Man in the Metro City observatory, a copper-lined globe which is somehow Metro Man's weakness. When Megamind blows up the observatory, Metro Man is caught inside and, apparently killed.

Yes, the villain won. Having killed his rival, Megamind is able to take over the city and terrorize the populace. Eventually, though, this wears thin and Megs has to find something else to do to while away his time. He misses having a superhero to battle, the back and forth game. This leads him to try and create a new superhero (based on Metro Man's DNA), creating Titan (Jonah Hill). Titan was originally Stewart, the camera man for Roxie Ritchie (Tina Fey), Metro Man's supposed girlfriend. As Megamind crafts Titan into a hero, he's set on the path (in disguise) to learn more about Roxie, and soon the two hit it off. This only angers Titan, though, as he too had feelings for Roxie. Soon, Titan has spun off in a tizzy, becoming a villain, and with no one else around that leaves only one person to defend the city: Megamind.

While Megamind may have been too early to the nascent superhero genre (only started in its current form two years before the film's release with Iron Man), and yet it also feels curiously dated, as if its at least 20 years late to the party. That's because while we now associate the MCU with all things related to superhero cinema, Megamind is obsessed with the classic, Richard Donner-directed Superman films. It's not just in the origin story of Megamind (who is equal parts Superman and Lex Luthor) and Metro (all Supes, with just a little Booster Gold obliviousness), but later when Megamind is crafting Titan. Here, the villain takes on the guise of Titan's "space dad", and it's basically a riff on Marlon Brando's Jor-El. 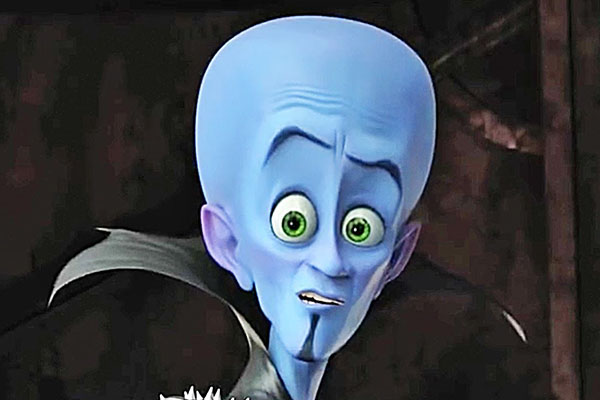 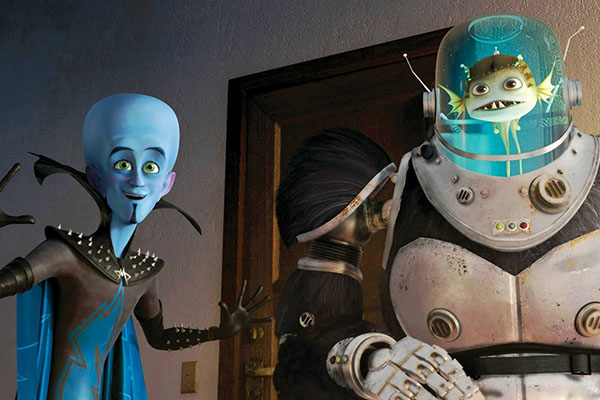 Hell, the entire back-half of the film plays out like a DC ComicsOne of the two biggest comic publishing companies in the world (and, depending on what big events are going on, the number one company), DC Comics is the home of Superman, Batman, Wonder Woman, and just about every big superhero introduced in the 1930s and 1940s. Elseworld story where Superman goes bad and Lex, of all people, has to save the day (because this is the moment Lex has been waiting for). It's just an off-brand version of that, a play on the formula without the DC logos included. And I'm not saying that's necessarily bad, but it certain feels like it belongs in a different era than the one we have now. No one is talking about the classic Superman stories, not when Avengers: Endgame is making basically every dollar ever. Superhero movies have moved on, but Megamind never will.

Maybe it isn't fair to compare Megamind to the genre that was just about to form around it, but that's a thing about media: it constantly gets compared not only to what came before but what also came after, to see if it holds up, if it becomes dated. Even if we ignore the MCU, it's still a curious choice to have Megamind be so obsessed with the Superman films from 30 years prior. Even Mystery Men had the sense to go after targets closer to its own release date, the day-glo visuals and storytelling of the Shumaker Batman films. Megamind feels positively anachronistic when viewed in any time period applicable.

But that's not the only issue the film has. It also struggles to be a good parody. When I was watching the movie the best I could muster were a couple of amused chuckles. The movie tries to be funny but it doesn't have enough jokes to really power its parody. This, again, comes from the fact that it came out right at the start of the superhero boom. If it had come even a couple of years later, Megamind might have had more to say about the genre, more nits to pick and jokes to make. By the time it come out in 2010, basically every good joke that could be made about classic Superman had already been made. The best the film could muster, then, was a decent Marlon Brando impersonation from Will Farrell (which I'm sure had the six year olds in the audience absolutely rolling in their seats). Beyond that, the film just doesn't have anything to say.

In fact, the best gags in the film aren't even intended. When Titan goes bad, he immediately takes to tearing up the city. This leads to levels of destruction not seen until, well, another Superman movie, Man of Steel. Of course, this movie came out three years before that film, so while the destruction feels prescient, considering where DC would eventually take its movies, the film can't really comment on it. It's more like a joke played on Man of Steel, but it's only funny if you then go back and watch the DCEU film afterwards. 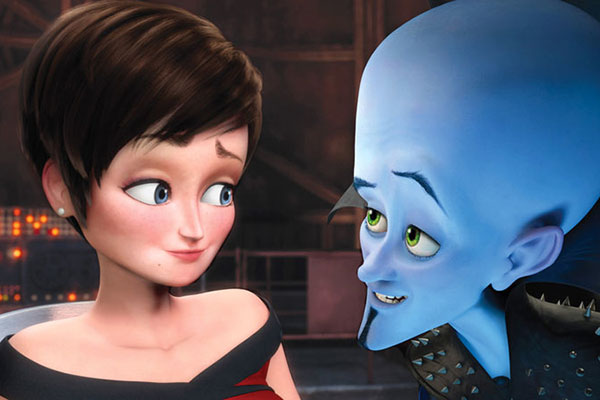 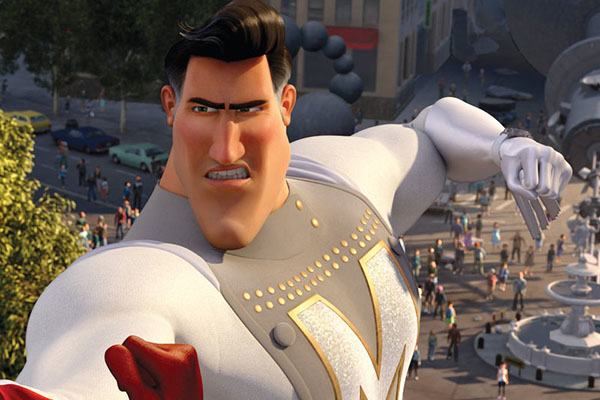 Megamind is a fine enough movie if you're just wanted to kill an hour and a half with some off-brand superheroes. It has a certain amusing aesthetic and, if you have seen the classic Superman films, you'll probably end up laughing a few times during the movie. It just lacks anything to really say about the genre its poking fun at. There weren't enough superhero movies out at the time for this film to work over the tropes, plus it's a movie meant for kids so it can't be very edgy or biting. It's mass market and as safe as can be and, more than anything else, that limits what the film can get away with.

But then, that's to be expected from Dreamworks Animation. Watching the film, the two things that stood out to me (other than how much this film loves Superman) was that it looked and played out just like every other Dreamworks Animation film I've seen (outside the How to Train Your Dragon flicks). It features chunky graphics, a soundtrack loaded with easy-to-recognize hits (that don't really enhance the scenes they're in at all), easy jabs and lowest-common-denominator jokes, and ends with a dance party sequence. Swap in fantasy creatures for superheroes and I literally just described every single Shrek movie. This film doesn't stray from the hits that made Dreamworks Animation at all.

I don't want you to think I hated this movie. It was fine. But that's the problem: it was just fine. I didn't feel the need to shut it off, I was amused at some of the things it did, and by the end I felt like I'd spent the previous 90 or so minutes decently well. But I don't feel the need to ever watch it again, and I'll rewatch just about anything I like. Megamind wasn't good enough to ever end up on my TV again, so while it was fine enough, I wouldn't call it, in any way, shape, or form, good.