Travel the World, Be Bored By the Sights

To say my anticipation Marvel Cinematic UniverseWhen it first began in 2008 with a little film called Iron Man no one suspected the empire that would follow. Superhero movies in the past, especially those not featuring either Batman or Superman, were usually terrible. And yet, Iron Man would lead to a long series of successful films, launching the most successful cinema brand in history: the Marvel Cinematic Universe. SpidermanSure, DC Comics has Batman, Superman, and Wonder Woman, but among the most popular superheroes stands a guy from Marvel Comics, a younger hero dressed in red and blue who shoots webs and sticks to walls. Introduced in the 1960s, Spider-Man has been a constant presence in comics and more, featured in movies regularly since his big screen debut in 2002. film was high would be an understatement. I don't like to get myself too hyped up for movies as, quite often, the actual film can fail to meet my expectations even when it's a perfectly fine movie, and then I'm mad at it and fail to see the good because I wanted something more than what I got. Learning to temper my expectations has helped me to enjoy many more movies over the years, to see the good in what's on screen even if it doesn't match what I wanted. So I knew going in to Spider-man: Far From Home that the film I was about to get wasn't the one I wanted after the one-two combo of Homecoming and Into the Spider-Verse -- the reviews of the new movie have been pretty savage. 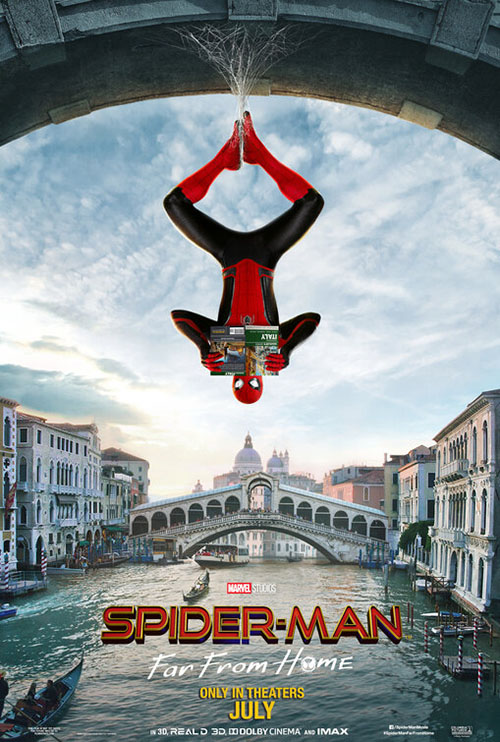 That's probably why I left the film feeling pretty good about the experience over all. The film certainly isn't as good as the original, with a lot of fluff that doesn't go anywhere and attempts at humor that just don't play. Once the main story gets going though, and the spectacle is allowed to play out properly on screen, the film really comes together. It's just a pity there's a good 45 minutes of so of movie that could have probably been ditched completely in the process.

In Far From Home, Peter is struggling with legacy: Iron Man is dead (spoiler if you still haven't seen Avengers: Infinity War but, seriously, the MCU is moving on and we don't have time to wait for you) and peter feels like he had to somehow measure up to his mentor (with Tony Stark here filling the role traditionally held by Uncle Ben in the comics and other movies). He struggles to fill those shoes, so, instead, he does the teen-aged thing and bails, going on a school trip with his science class (most of whom, like Spidey, were blipped out of existence for five years by Thanos). Events, however, are conspiring to ruin Peter's trip and force him to make the heroic choice once again.

It seems that there's a new planet-threatening set of monsters on the loose, four elemental beasts that destroyed another Earth and have no come to our world to threaten it as well. We learn this from a new hero, Mysterio, who traveled over from that Earth to help save this one. Mysterio and Spidey strike up a friendship and learn to work together, quickly besting the elementals and saving the world once more. That's why Spidey decides that Mysterio, and not himself, would be the best person to take up Iron Man's legacy. He gifts Mysterio with access to the Stark network before going back on his trip. Unfortunately, Mysterio is hiding his own secrets and Peter's trust in the hero could, in fact, put the whole world at risk.

I don't want to get too deep into spoilers here (and, no, I'm not going to do a separate spoiler article this time around -- not every movie in the MCU needs to be treated like an Avengers mega-event), but suffice it to say that if you know anything about the characters from the comics then the fact that there's a mid-film twist that redefines Mysterio really shouldn't come as a surprise. The twist is handled well, and the consequences afterwards are what really bring the movie together, to set it on the tracks to make a propulsive and awesome back half. It's just unfortunately that, before we get to the big action and big reveals, we have to wade through 45 minutes of class-trip tedium. 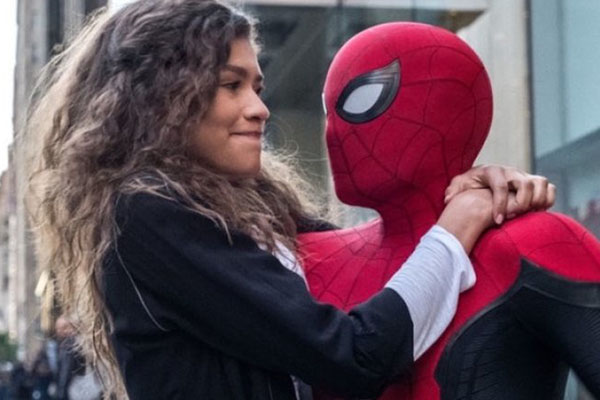 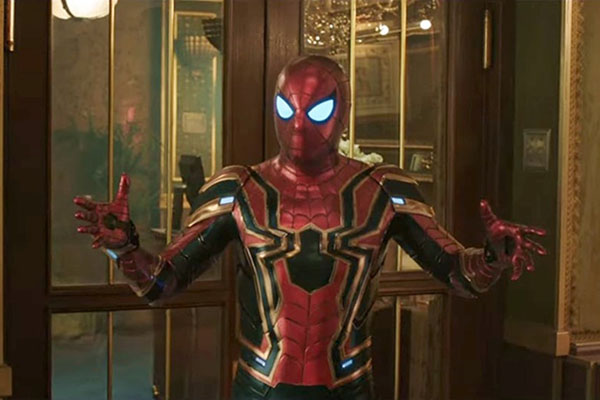 Some of the best parts of Homecoming were the high school scenes. That movie managed to treat Peter like a real teen, a guy with normal, every day concerns who also happens to be a superhero protecting his neighborhood. It worked in that film because Spidey was still fairly small time and the film managed to keep everything he was doing street-level. The blend of high school stories (and humor) along with super-heroic spectacle (that still felt pretty grounded and manageable for our friendly neighborhood webhead) made for a solid, cohesive movie. But then Spidey went to space.

Right around the point Spider-man started taking on galactic threats and helping the Avengers fight supervillains, he stopped being just a friendly neighborhood Spider-man. The movie even knows this, acknowledging half-way that Peter's protestations to being a big hero, the successor to Iron Man, don't make much sense considering the things he's seen and done. And yet, as if trying to stick to the formula of the first movie, we still get an entire opening of Peter going on his trip, seeing the sights, following along through one montage after another. It's all table setting to get Peter in a place where he can help Mysterio fight the elementals and none of it really works.

Part of the problem is that none of these scenes are funny. The previous film features great chemistry between Peter, his best friend Ned, and the rest of their cast. This film, though, pretty much mires each of his friends in their own "goofy" stories that don't intersect with what Peter is going through. Instead of relying on his friends and family to help him process his emotions and the new things he's seeing, Peter comes to rely on Mysterio. I'm not saying this is a bad idea -- the two heroes have great, friendly chemistry together which helps the mid-movie twist land as a solid gut-punch -- but if the film is going to have Mysterio fill the role previously filled by all of Peter's other friends, why bother having the rest of them in there? Because they were in the previous movie? That's not a good enough reason.

Additionally, the whole travelogue aspect of the movie, traveling from Italy to Spain to Prague to London, doesn't add anything to the movie. In the film the elementals show up at different spots on the globe and the heroes have to battle them at each location. This could have just as easily been handled in the U.S., with the first attack in New York before others appear around the country (or continent). Peter comes to Mysterio's aid in Italy because that's what Peter does, but the hero doesn't feel any personal connection to Italy, not like he would if the attack had been launched in New York. Peter is protective of his home, and if an elemental had shown up in his neighborhood, he wouldn't have questioned fighting it for a second (and then, because he was already invested) he likely would have then con along to protect other cities, other neighborhoods, because that's what he does. 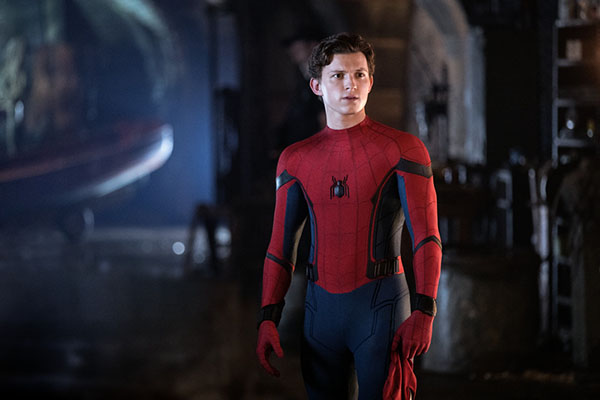 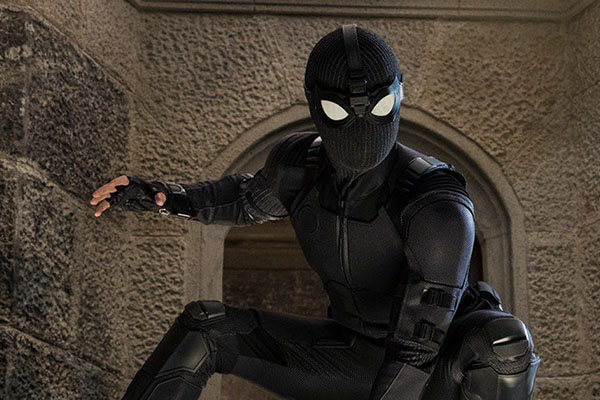 Plus, the movie really doesn't know what to do with Peter and his conflicted feelings over Iron Man's legacy. He loved Tony like a father (again, replacing Uncle Ben), but he also doesn't feel like he can measure up to the fallen hero. This is a great storyline that, in the movie, is handled by two passing scenes and then a long talk between Happy Hogan (Tony's best friend) and Peter. The movie doesn't really know how to do deep emotion, instead preferring dumb humor and big action, so any time Peter is about to get serious the film tries to cut away or crack a joke instead. Peter dealing with Tony's death is a big deal, a story that could have been handled with the same level of care as Tony's PTSD from Iron Man 3 onwards, but instead the movie tried to sweep it under the carpet as quickly as it can. "Oh, look! Spectacle! Go look at that instead of getting all deep and mushy."

That said, the spectacle on display is amazing. Once Mysterio is really allowed to let loose, the film produced some of the best action sequences in the MCU in a while. The action is focused, the effects are put to good use, and everything moves with a crispness many of the later MCU films have lacked. Once the villain is ascendant, everything clicks together and the movie pulls together it's heart, it's action, and it's spectacle into a solid, enjoyable movie. From the 45 minutes (or so) mark on, Far from Home becomes the Spider-man movie I really wanted.

So far we haven't had three good Spider-man movies back-to-back-to-back. The first two Raimi movies were pretty solid, but the third was a wretched turd. Meanwhile, the "Amazing" Webb series stumbled so hard after two movies that all future plans for that universe were scrapped. This is the closest Sony has come to make a worthy third Spider film in a row. It's not perfect, not by any stretch, and it does take a long time to get going. Once it finally kicks into high gear, it's the Spider-man movie we wanted all along.

Let's just hope that next time Sony and Marvel learn their lesson and try to keep the focus where it belongs: on Peter and his villain.