Hooked on a Feeling

MCU 10: Guardians of the Galaxy

Before the summer of 2014 it was pretty easy to define what kind of movies the Marvel Cinematic UniverseWhen it first began in 2008 with a little film called Iron Man no one suspected the empire that would follow. Superhero movies in the past, especially those not featuring either Batman or Superman, were usually terrible. And yet, Iron Man would lead to a long series of successful films, launching the most successful cinema brand in history: the Marvel Cinematic Universe. would produce: fairly grounded superhero movies set on Earth. Whatever else might change about the films -- period pieces, spy thrillers, monster flicks -- the basic genre of everything would remain the same. That changed with the release of Guardians of the Galaxy, a film that, were it not for the big "Marvel Studios" logo at the front of the movie, you almost wouldn't be able to tell it belonged in the rest of the MCU at all. 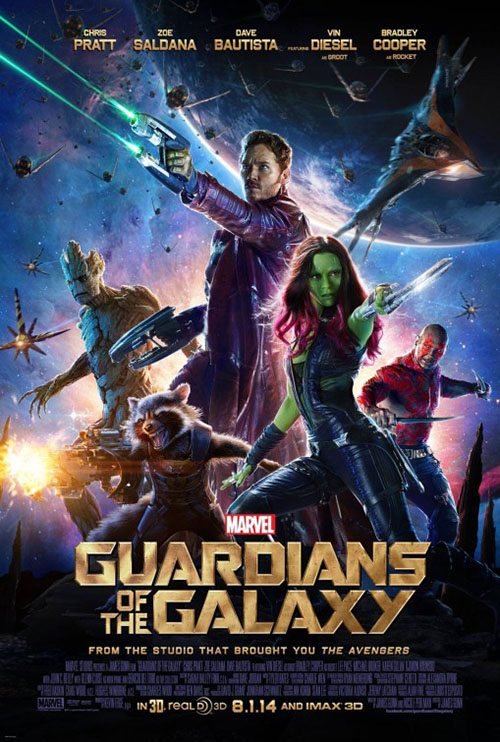 To be sure, Guardians was a bold release choice for Marvel. A space-action film largely starring characters actors -- the biggest star in the film was arguably Vin Diesel and he didn't even actually appear in the movie -- set against a portion of the MCU that had never been explored before, with absolutely no superheroes appearing in the film at all. Although the trailers for the film did a lot to get audiences interested (seriously, go watch the second trailer, which really sells the concept of the film), there were still a lot of commentators Online that expected the film to be a total bomb. Who would show up for a group of no-name heroes in a space odyssey?

Of course, a lot of people showed up, and that's a testament to the quality of the film. Director James Gunn (who would later be fired by Disney for stupid, stupid reasons) had a very clear and specific vision for Guardians, letting his particular style flow over every choice of the movie. The film is easily one of the weirdest films in the cannon, a movie about rogues and thieves traveling the galaxy (along with their living tree), escaping from prison, exploring the hollowed out heads of dead gods, and collecting power gems, all set to a soundtrack of '70s and '80s music. There's no reason why this movie should have worked, and yet it does, so very well.

Going back and watching the movie again, the thing that struck me was despite the humorous tone of the film, there's a fairly epic scope to the proceedings. A lot of people compared Guardians to Empire Strikes Back, although I feel like that's just because that film was the last space epic anyone really cared about. Aside from both having awesome people traveling the stars, the two films are night-and-day apart. Empire has a serious tone with a dark ending while Guardians is a fairly light romp with a hopeful ending. Of course, Disney owns both films at this point but beyond that connection, I don't really feel like the comparison does the film any good.

If anything, the original Star Wars film is a better comparison. We have a rag-tag group of people thrown together by fate, just trying to find their way in the universe. Lead, in some ways, by a roguish space captain, the team has to learn to work as a unit and aid an alliance of planets against a dark and evil threat. By finding the heroes within themselves, the group saves the day and becomes a family. It's about a group of people finding themselves set against a epic scope of space. 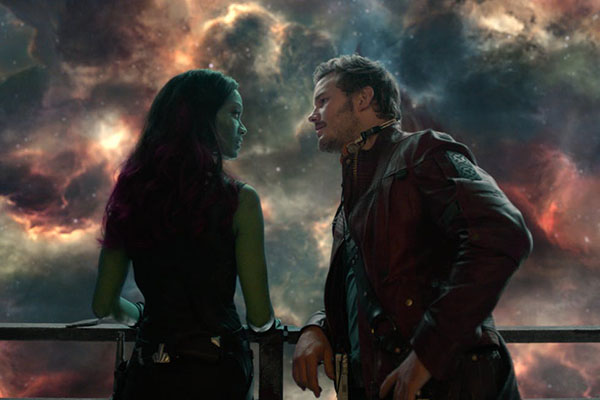 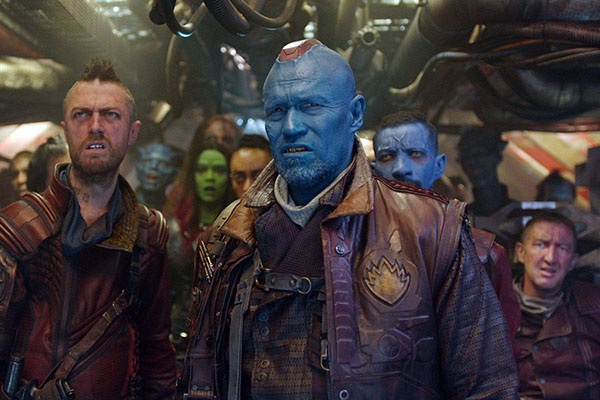 The thing is, though, that each location the Guardians visit actually feels fleshed out and developed long before our heroes even show up. More importantly, every set piece feels necessary -- we never visit a location for the sake of future storytelling, and each place has a role to play in the greater story. Compare the prison sequence in Guardians -- where the heroes bond together and we get to find out each of the heroes' quirks (Rocket's tech-savvy, Groot's naive straight-forward attitude, Gamora's anger towards Thanos) -- to the casino planet in The Last Jedi. The prison is essential, a point where the heroes find a new path and learn more about the space they live in, while the casino planet could easily have been excised from the latter film and no one would have noticed.

That's the quality of Guardians -- there's nothing in the film that isn't essential in some way to the overall arc of the story. That's not to say there aren't seeds for later films setup in this movie, but there's little hints, tiny points of story said in a off-handed way that you can go back and enjoy once you've seen the sequel. But these moments aren't distractions from the main movie and they don't make promises about stories we'll potentially see but then never get to in the same film. So many movies have to setup their future installments, but here any off-hand comments could have been just that. The first time through you probably won't even really care about who Starlord's dad might be (even if he is played by Kurt Russel in the sequel), or what happened in the hero's past. It's nice to know eventually, but they don't force it into this movie for no reason.

It's impressive, really, because there are five strong characters the film has to introduce us to and yet, just like the overall story, the script deftly handles each character in such a way to avoid any unnecessary details. It's tight and lithe, from the starting intro of Peter Quill / Starlord (Chris Pratt), to the quick battle between him and Rocket (Bradley Cooper), Groot (Vin Diesel), and Gamora (Zoe Saldana). These early scenes set the tone and pace without smothering us in one tragic back story after another. They each do have their own tragedy, sure, and the film pays due respect as needed, but it doesn't wallow or drag the story down. It's a delicate balancing act that writer/director Gunn handles perfectly.

If there are any flaws in the movie, it's the villain of the piece, Ronan the Accuser (Lee Pace), a Kree warlord who wants to destroy the universe. You know, for reasons. As I've noted before, villains have to have a personal stake in the proceedings, a reason to get involved that we can understand and care about. Ronan hates the planetary alliance, the Nova Empire, for reasons we never really understand because more time is spent setting up Peter Quill than his main adversary. There are hints of his own tragic back story, but the movie never really shows us any of that so it doesn't stick. Lee Pace does what he can to make Ronan feel like a force but because we never see why he's mad we don't care about his story. Not every villain has to be as good as Loki, to be sure, but we need more than a few lines thrown off about his grudge with the Nova Empire before we can care about his big plan. 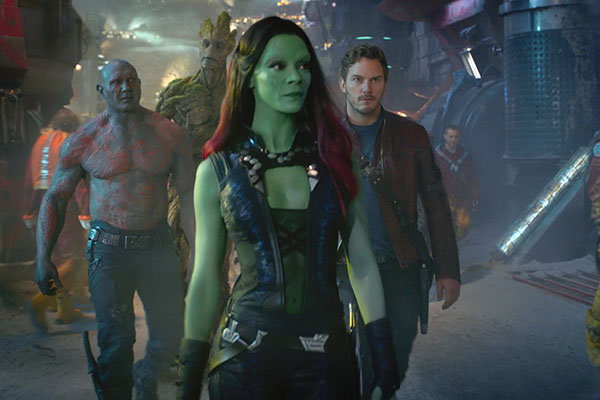 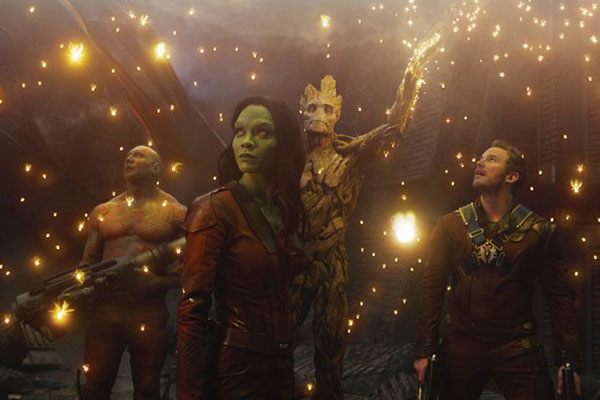 But then that's a flaw with so many Marvel films. Due storytelling is done for the heroes but the villains never get that same kind of treatment. Of course, if we go back to the Star Wars treatment, we don't really learn a lot about the Empire in that film, either. The whole reason we know to hate the Empire is because they dress like Nazis and blow up planets. The reason why it sticks is because Darth Vader is awesome looking and James Earl Jones gave him an imposing voice. As much as I like Lee Pace, he's no James Earl Jones.

While the villains may not work, so much of the film does. In all honestly, it's hard to imagine this film, or this team, being anywhere near as good without James Gunn at the helm. Any other director would have changed things, handled them differently, and probably would have made a far inferior movie out of the team they were given. Guardians of the Galaxy works, and it probably one of the best films in the Marvel cannon, because of Gunn.

And then, after the sequel, Disney fired him. Their loss is Warner Bros. gain, though, as he's off working on a Suicide Squad movie -- essentially WB's version of the Guardians. I have no doubt that whatever movie Gunn produces it'll be a singular vision that comes to redefine the DC Extended Universe. Just like Guardians of the Galaxy did for the MCU.