Superheroes on the TV 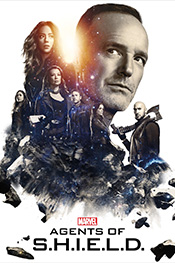 As I have commented in the past, I'm a big fan of the Marvel Cinematic Universe. As and out-and-out DC fan who wouldn't give a rats ass about Marvel comic books, this does actually cut me a little deep. I want DC to beat Marvel at everything, and yet they don't sell as many comics nor do they have as many good movies (although Man of Steel does show the promise of a turn around in this department). The one front DC has Marvel beat is on TV, and now even that looks like its starting to change.

Back in the day, superheroes were hard to adapt off their comic book pages. The hyper-color capes and tights are hard to translate into the real world without them looking dorky, and for many, many years super powers were too expensive to replicate. CGI has done wonders for translating superpowers to the screen, and costumers have managed to find ways to make superhero outfits work in the "real" world. But for a long time the best adaptations of superheroes were in cartoons.

In the '90s and '00s heyday, DC and Marvel fought back and forth on the little screen (television, not iPads), and there are many fans of the cartoons that spun out of that era. Spider-Man, X-Men, Batman: The Animated Series, Superman, the Justice League (Unlimited). There were a lot of cartoons that did justice to the characters, and it's hard to choose which series was best since they were all so good. Your favorite heroes may not be so great on the silver screen (I'm looking at you, Batman and Robin), but on television the Batman we always wanted was fighting it out in the DC Animated Universe.

It wasn't until Sam Raimi's Spider-Man, though, that it felt like the time was right for live-action super hero films, and ever since that flick the market has only been getting better and better, with Marvel easily stealing the show.

DC, though, has learned from the past... well, sort of. While their movies are still only ramping up for the great DC Cinematic Universe, on television they have managed to carve out a fine showing for their heroes. Sure, even a few years ago it look pretty dire -- Smallville is a wretched piece of shit and Birds of Prey was so bad it couldn't even make it to a full season on the incredibly forgiving WB network despite the promise of maybe, one day, sort of having Batman in it if you prayed hard enough.

But then along came Arrow, a TV show that learned from the since of series past while borrowing more than a smidge from the Christopher Nolan Dark Knight series. Everything on the show is given a grounding in reality (at least up until third season), and the production values, writing, acting... it all lines up to create a series that treats the comic book material with respect (even as it changes things around). And it's Green Arrow! If anyone character would make a good TV hero, no one would have suspected it would be Green Arrow. Sure, the dude is just Batman in a greener, more Robin Hood-y guise, but there's something so ridiculous about a guy with a bow and arrow fighting crime.

But Arrow just works. Sure, it's a little schlocky in places, and the production values aren't always up to the material (so many terrible CGI shots of boats and islands in the early going). But it tries, and it tries with respect. This has been continued in Flash, Arrow's spin-off show and the second series in the DC Television Universe. There are even plans for a third show, Justice Friends Forever (not the actual title), plus an animated spin-off, Vixen. In short, the CW has done a lot to create a solid DC universe (and, in the process, make up for the sins of Smallville).

And yet, DC still doesn't quite have their act together. On another channel, CBS, DC will be airing Supergirl, which, from all reports, will not be related to the CW universe (which kind of makes sense since TV channels aren't always fans of promoting each others' shows). Then there's Gotham on FOX, which is about the early days of Batman and isn't at all related to the CW universe or CBS's Supergirl. Plus there's Titans in production over on TNT which doesn't seem to be related to anything else at all, and Krypton in production over at Syfy, which won't be related to anything even if it wanted to since it's set 100 years before Superman (or Supergirl, or Arrow, etc, etc.).

In short, if you're a fan of DC's character's this is a great time for TV, but if you're hoping for DC to create a cinematic universe on TV that rivals what Marvel has managed to do, you're shit out of luck. Hell, none of the TV shows DC has in production are related to the DC movies, either, as evidenced y the fact that the Flash on TV won't be the same one as the Flash on the silver screen (even that I'm pretty sure they're both supposed to be Barry Allen).

Contrast that with Marvel. Aside from a few cartoons for the little ones that aren't related to the main universe (which, from the sounds of it, Marvel is even reconsidering soon), Marvel has tried to stake out the same universe between TV and movies. This started with Agents of S.H.I.E.L.D. (which is obnoxious to write, so we'll just call it Shield from now on), which started after the first Avengers movie and was directly influenced by events in Thor: The Dark World (with a couple of Thor characters popping up in Shield) and Captain America: The Winter Soldier (which totally blew up the back half of Shield's season). In this respect Marvel has done a great job in tying all their properties into one universe (and just as soon as Shield season 2 comes to Netflix I'll be catching up on that season as well to see what else has happened between all the properties).

The issue in the early going, though, is that Shield is really not a good show. Sure, after the first eight or so episodes it improves from bland and mediocre to mildly enjoyable, but it was never anywhere near as good as it's cinematic partners, nor did it ascend anywhere near Arrow. And so, for a while, it seemed that DC could at least hold the high ground on TV. They could know fuck all about movies, but DC fans could take solace with the boob tube.

Then came Agent Carter, which was such a smart move on so many fronts: a female-led "superhero" series (in a world where only men get solo-outings normally) with good production values, smart writing, and solid acting. Plus, it gave us more of the 40s and 50s time period, which we just didn't get enough of in the first Captain America movie (we could have had a whole series of those flicks as far as I'm concerned, and not just the one -- Cap fighting Stalin; Cap taking on Nixon; yes please, sign me up!). It was everything Shield really should have been. And, high-praise indeed, it was at least on par with Arrow. You really can't ask for more, right?

Well, that was before Netflix got involved and unleashed Daredevil. And, dear lords, that is my new high-bar for superhero television (and remember, I don't even like Marvel, really). Daredevil is well written, well acted, well-though-out. And it feels of-a-piece with the greater Marvel Cinematic Universe. I could seriously see watching an episode of Daredevil and then seeing the main character show up immediately afterwards in a big-screen movie and I don't think there would even be a moment for me of going "this is weird." It's cinematic TV.

And thus, there's my dilemma. I want DC to win. I want them on top because I love their characters. But now, in every respect (especially since DC can't seen to get a cartoon off the ground to save their lives -- oh, Young Justice, you died too soon), Marvel is winning. And I'm enjoying it.

What does that say about my fandom?