And We're Back, With The Same Problems

And regular coverage of the ArrowverseWhen it was announced that the CW was creating a show based on the Green Arrow, people laughed. The CW? Really? Was it going to be teen-oriented like everything else on the network and be called "Arrow High"? And yet that one show, Arrow has spawned three spin-offs, various related shows and given DC a successful shared universe, the Arrowverse on TV and streaming. resumes once again. After a winter break of about a month, four of the five regular shows are airing once more (sorry, Legends but you have to wait until April, once Black Lightning ends its season). It's good to get back into the groove with these shows, and even nice that we have two less to worry about (since Titans finished its run). 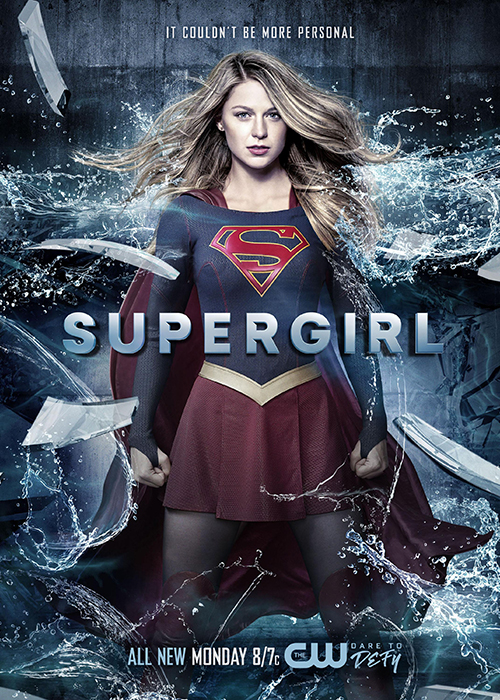 As these are just mid-winter premieres (and not the start or end of seasons) I don't feel like we have to talk about all these episodes in detail. Instead, we'll just do the usual thing and pick the two best to discuss:

As you might recall, the big (supposed) villain of the season, Agent Liberty, was taken down by Supergirl and her team. However, public sentiment had, for whatever reason, turned against Supergirl (and other aliens), with demands being made for Supergirl to unmask herself and reveal who she really was to the world. Instead of doing that, Supergirl left the DEO so she could be a free agent. While she had the support of her friends, and especially her sister Alex, this decision didn't sit with the governmental higher-ups. New head of the DEO, Colonel Haley, makes it her mission to find out Supergirl's secret identity, whatever the cost.

This plot line butts up against that of a secret experiment the DEO is none too proud of: invisible alien assassins. These aliens, raised (and tortured) by the DEO from the time they were little kids (eggs? larvae?), recently broke from of their containment (after the DEO agents tried to kill them off as part of the U.S. Government's alien zero tolerance policy) and have been killing all the people ever involved in their incarceration. And, wouldn't you know it, Haley was one of those people. This means Supergirl has to save the woman also investigating her. Even after saving the Colonel's life, Haley still goes after Supergirl with a blind passion, which means everyone at the DEO that knows Supergirl's identity has to forget it. So, willingly, they all have their mind's wiped of the info by the Martian Manhunter... including Supergirl's sister, Alex.

As I've noted before, Supergirl has gone whole-hog on the political allegory this season. While the show isn't always subtle about it, and sometimes (like in this episode) has to twist itself into knots to make the allegory work in service of the plot, I do commend them for the attempt. This show could probably go on for a long time having Supergirl punch evil-doers (and other Kryptonians) and fans would be happy. Instead, it's trying to tell a real story that reflects the political landscape of the real world. Even if it doesn't always nail it, the effort is appreciated. Escapism is fine, but at a certain point you have to face reality and think about what's going on in the real world. Supergirl (and Superman as well) serves as an ideal for us (something I noted in my Man of Steel review) so she's the perfect character to shine a light on real world politics.

Speaking from that front as well, another political football is going to get tossed into Supergirl's lap before too long. For a good portion of the season (ever since it was setup at the end of last season), we've seen glimpses of a Supergirl clone that has been living, and training, in Russia. I just shrugged it off before, assuming it was just a way to get Supergirl to punch a Kryptonian again. But now, thinking on the political allegory of the character (and the Russian plots actively going on in the real world), I think this is another attempt to use Supergirl to reflect our world. The Russian "Red Daughter" (as the producers are calling her) can serve as a mirror to Supergirl, to show why the hero is the ideal and who circumstances, and duty, helped shape the character. And I have to assume they want to use this as a solid allegory for our world's Russian issues. Assuming, of course, the producers can actually handle it well. 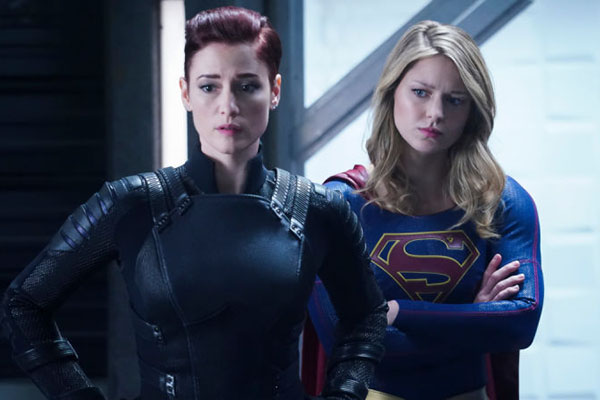 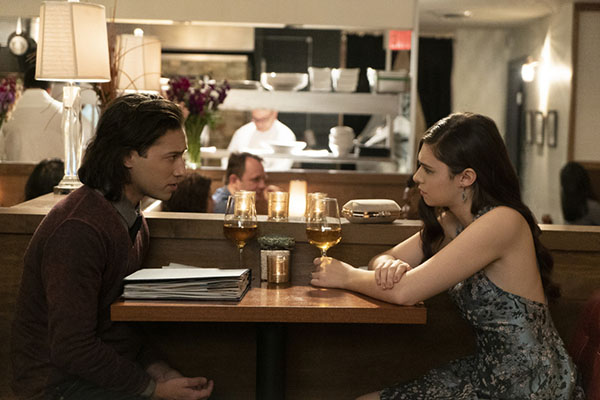 Really, though, the big twist of the episode that's been getting so much coverage Online is the fact that Alex, Supergirl's sister, willingly has her memory wiped of the fact that Supergirl and her adopted sister, Kara, are the same person. I'm interested to see how this plays out -- as an episode twist it pays off well, but that doesn't mean it can have the legs to carry through the season. The dynamic of the two characters is such that a secret like this could twist the core relationship that drives the series. Will it ruin the characters, casting a pall over the season? That's a risk with a change like this.

Plus, there's also the logistical issues with a change like this. If Kara isn't Supergirl does Alex even know her sister is a space alien? What's the explanation for why Kara came to live with Alex's family? And what about all the things Kara did, growing up, that were clearly Supergirl powers? Are all of those erased as well? One incident in particular (where Kara and Alex caught an evil sheriff) was even highlighted in an episode last season as a key reason Alex went into law enforcement. If that incident was wiped, is Alex even the same person?

Again, this is a risky move. I like the idea of the change, but it raises a lot of questions for me. Hopefully the series doesn't bungle it because something like this has potential to really evolve the show going forward. 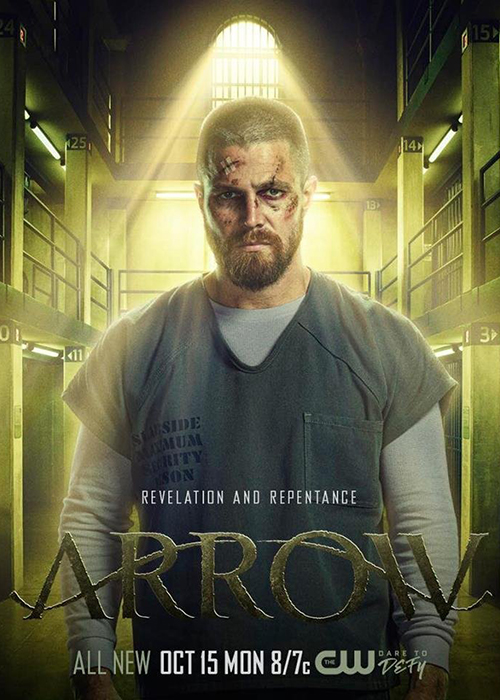 Shows that have been around as long as Arrow has often settle into their stories, simply replaying past hits over and over for the sake of a paycheck. Some would argue, for example, that Supernatural has been doing that for years now (and clearly, since it keeps getting renewed, the CW is perfectly okay with that arrangement). You have to respect the people behind Arrow, then, for their willingness to blow up the status quo, again and again, this season. First they sent Oliver to prison at the end of last season, and kept him there for most of the front half of this year. That then led to blowing up all of "Team Arrow", sending all the members off in different directions.

Even now, the group still hasn't officially come together, with Oliver / Green Arrow joining the SCPD and working with Dinah / Black Canary III as a deputy (a twist that makes sense in context and, really, should have happened last season to avoid the whole prison plot line), Diggle / Spartan and Curtis / Mr. Terrific off working for ARGUS, and Rene / Wild Dog, stuck spinning his wheels, trying to find a way to help the Glades. The fact that there's a mysterious second Green Arrow now working the streets complicates matters. Oliver (along with Felicity) are set on the task of tracking down the new Green Arrow, but then they discover that she's actually Oliver's half sister, Emiko Queen (a family member he never knew about), and it throws off his whole world. Meanwhile, Rene ends up working with Green Arrow II, and now we have different sides of Team Arrow actively working against each other.

Giving Oliver a new, secret sister right after his previous sister, Thea, left the series feels a little weird, to be sure. That said, within the context of the show a secret sister isn't the dumbest twist possible. The show already set the groundwork for it, having Oliver's Mom arrange for a girl Oliver impregnated back in the day to disappear (with a solid cash payout). The thought that she would do this again for the daughter of her husband's secret mistress certainly is within the bounds of logic. 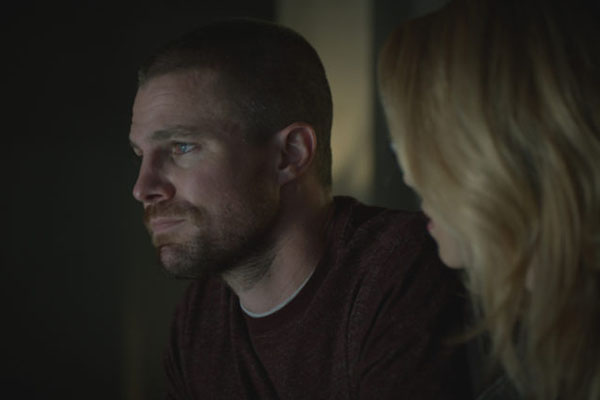 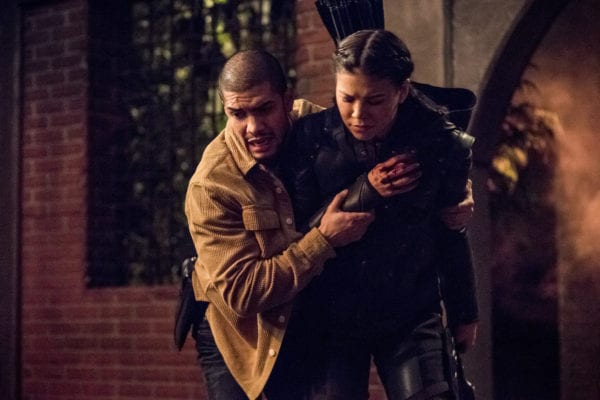 Less logical is that, somehow, Emiko could become as good at being the Green Arrow as Oliver has with vastly less time to train. Remember, as the show like to tell us time and again, Oliver spent "five years in hell" picking up the skills he needed to be a one-man army. It's a bit weird that Emiko could do that in one-fifth the time. It's a detail that doesn't quite work.

That said, I'm willing to forgive the minor details because the dynamic between the two characters could get interesting going forward. These are two characters with a gulf of time (and, on the part of Emiko, hurt feelings) between them. Whether or not they can bond as a family is one question, but it also puts Oliver in a position of trying to hide his sister from the SCPD, which puts him back on the wrong side of the law right after he was finally in the clear. Where the show takes this could get very interesting, and I'm hopeful for the potential of it.

Certainly, it's better than whatever is going on with Diggle at Argus or all the weird plotting of the Flash-Forwards. Those are plot lines the show could ditch and I wouldn't care at all right now. These sections certainly make "My Name is Emiko Queen" an uneven episode, but the A-plot helps to carry the episode (and sets a path for the future of the season).