Best Agent on the Force

It's interesting to go back and look at how the Marvel Cinematic UniverseWhen it first began in 2008 with a little film called Iron Man no one suspected the empire that would follow. Superhero movies in the past, especially those not featuring either Batman or Superman, were usually terrible. And yet, Iron Man would lead to a long series of successful films, launching the most successful cinema brand in history: the Marvel Cinematic Universe. evolved in its early years. While, of course, the main heroes gained all the focus and love, there were a couple of characters that became fan favorites in their own right. Agent Phil Coulson, of course, became beloved due to the delightfully acerbic performance of Clark Gregg, and he had a number of movies to build his following. After The Avengers became a surprise smash hit (even the commentators that assumed the movie would do solid business never expected ti make over a Billion dollars), Marvel immediately put plans in place to spin Coulson out onto his own show, Agents of SHIELD (this despite the fact that Coulson died in Avengers). 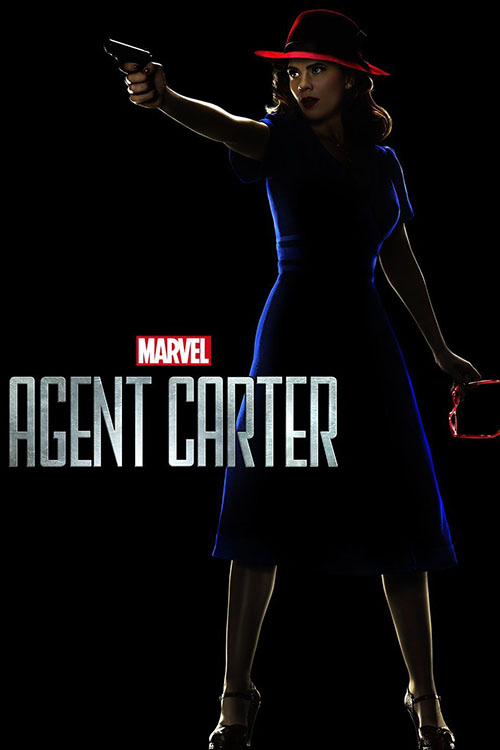 Another character, though, had as much fan adoration behind her, and she didn't even have all the other movies to build that following. Peggy Carter, played wonderfully by Hayley Atwell, appeared in Captain America: The First Avenger and was such a delight that basically everyone begged for her to return in other works. She eventually did, too, having a long career of cameoing in various MCU films. (Captain America needs someone to remind him of his past in The Winter Soldier? Bring on Peggy. Need someone to lead SHIELD in the early 1980s for Ant-Man? Have Director Carter do it.) But in the midst of her returning time and again for brief moments in the film series, Peggy also got to star in her own vehicle, Agent Carter on ABC.

When originally pitched, Agent Carter was treated as a spin-off of Agents of SHIELD. It's like ABC didn't think people would be interested in watching a film about a female secret agent in the late 1940s so they had to name drop Peggy on SHIELD and then, in advertising, act like we were getting the untold story about how SHIELD came to exist. Except that's not what the show was really about and trying to sell the show like that was a disservice, really. The show had a different goal for it's story, an agenda if you will (without it sounding like a "feminist agenda"), and it was more than just documenting the early years of the service that eventually came to be known as SHIELD. Hell, due to where the story went for the two seasons of the series (the first of which we're covering here), SHIELD doesn't even come up at all.

Instead we get to spend 10 hours in this first season as Agent Peggy Carter (Atwell) navigates the inter-office politics of the Strategic Science Reserve (SSR), the precursor to the agency that would eventually become SHIELD. On the front Peggy was a valuable asset, a gifted soldier and spy who was treated like a equal among all her colleagues (Captain Rogers among them). Back home, though, she has to deal with a lot of people who don't know everything that she accomplished; they just view her as some dame that used to have the hots for Captain America, and now they're stuck with her. Her duties mostly boil to answering the phone, taking lunch orders, and not being noticed.

That last part comes in handy, though, when Howard Stark (Dominic Cooper, also reprising his role from the first Captain America film) comes a'callin'. It seems that someone broke into Howard's secret vault and stole a number of inventions that could prove to be quite dangerous (Howard called them his "bad babies"). The SSR is convinced that Stark plans to sell all these weapons and they have Howard listed as Public Enemy #1. Carter, though, knows Howard and doubts his involvement in the scheme so, after a little cajoling, she takes up the case. Joined by Stark's butler, Edwin Jarvis (James D'Arcy), the two have to find the real culprits, clear Stark's name, and save the world from some very bad actors. 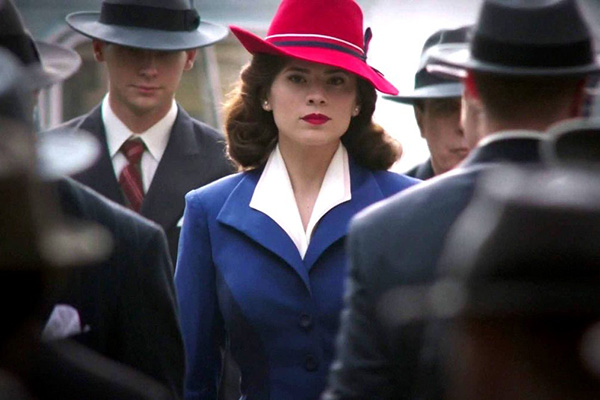 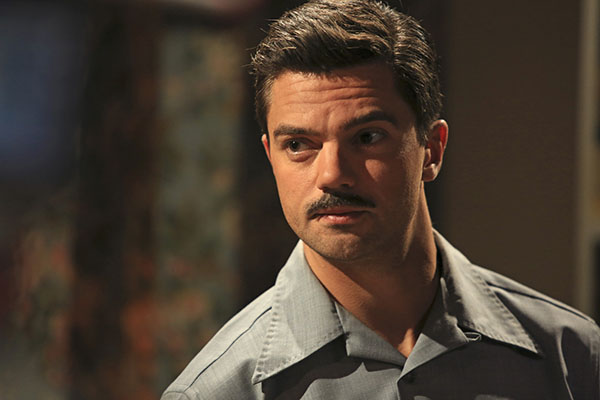 Giving Atwell her own show is a great idea, not just because Peggy Carter is a good character but because Atwell lights up the screen in the role. Her Agent was one of the best things about the first Captain America film, and while she only really had that one movie to truly shine (with a few limited cameos afterwards), there was a wealth of potential for her character. In the comics, Peggy was a supporting character for Cap, regularly showing up in the books. Due to the way the MCU was structured, we only got to spend that one movie with Peggy where she could have a solid character arc, and it's a damn shame that Cap moved to the future afterwards because further adventures between the two would have been fun to watch.

Atwell manages to carry on the love story of Peggy and Cap in Agent Carter all on her own. She's in mourning for the man she lost, the potential future the two of them could have had. No one expects she would have just settled down and been a dutiful housewife (she clearly never wanted that as she went on to lead SHIELD for decades after this), but that doesn't mean she wouldn't have wanted to have her career and Captain America as well. Atwell is able to convey all this, and more, in just her performance as well, but she gets to do so much more on the show, too. Peggy is all the things you'd expect from an SSR agent -- smart, capable, powerful -- but also fun and funny all because of Atwell's winning performance.

It's fair to say that Agent Carter is practically a one-woman show as Atwell carries so much of it on her own. However, the two supporting leads, D'Arcy and Cooper, help to liven up many of the scenes, making the show even more fun and nimble. The writing of the trio of characters, and the world around them, reminds me of a lot of 1940s and 1950s movies, with fast talking characters sharing witty repartee in between gun fights, fist fights, and dancing. It's like The Thin Man in a way, but set in the MCU. The characters sell the material and the story and setting work so well because of it.

If anything about the show stumbles its the fact that the villain isn't quite as good as it should be. The show keeps the real villain of the piece a secret for a while and then, once revealed, they're honestly pretty underwhelming. Their scheme requires too many moving parts, too much of the "I'm going to lure the heroes here so they can capture me and take me back with them so I can then put the next phase of my plan in place." It's a narrative device that's become common in action movies as of late but repetition hasn't made it any more believable. What the series needs is a solid, scenery chewing villain to do some real evil, but there's a void at the center of the show that keeps it from being truly amazing. 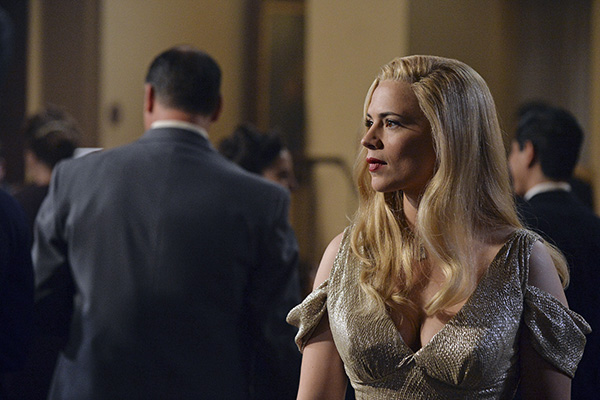 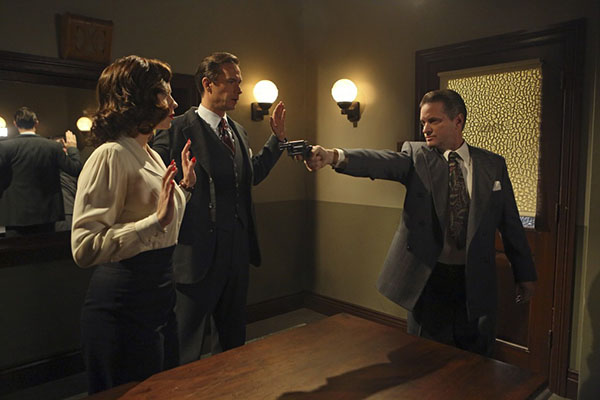 Even still, the show is so good because of the character at its center. Peggy deserved to have so many adventures, for us to follow along with her as she saved the world time and again. What I love so much about the show is that it put a spotlight on Peggy and made her feel like a superhero even though no actual super-powered people show up in the season at all. It feels, through and through like a genuine MCU production, tied tightly to the continuity of the movies (something Agents of SHIELD struggled to maintain), and the series sings because of it. This is the show Peggy deserved, the adventures she was meant to go on.

Which is why it's sad she only got another season after this. Her second season is great but we all needed more Peggy Carter in our lives...