Like Being Back in High School, But with Superpowers

In the short time since I restarted this blog this year I've already mentioned Spider-man: Homecoming multiple times, so it seems only right that we actually discuss that specific movie in detail. In short: I thought it was awesome and certainly one of the best Marvel Cinematic UniverseWhen it first began in 2008 with a little film called Iron Man no one suspected the empire that would follow. Superhero movies in the past, especially those not featuring either Batman or Superman, were usually terrible. And yet, Iron Man would lead to a long series of successful films, launching the most successful cinema brand in history: the Marvel Cinematic Universe. films to come out so far. 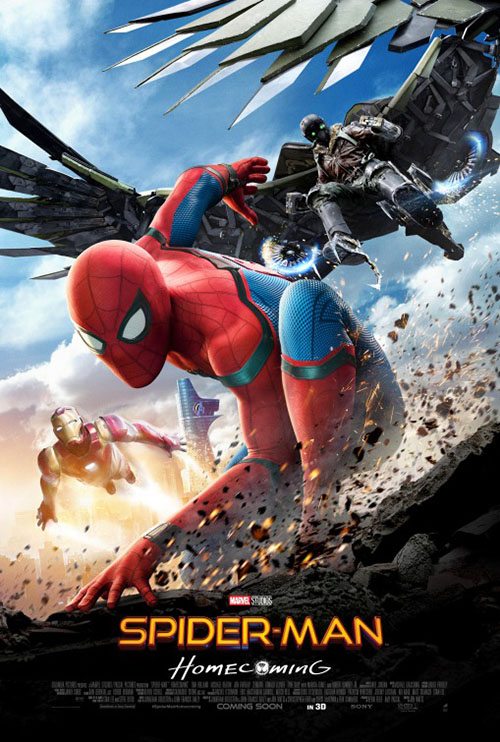 Out of context of any other Spider-man film or MCU film, the movie works on its own merits. It's a solid, self-contained story that doesn't try to tease other, larger plotlines beyond the scope of this single film. We meet up with Peter Parker (Tom Holland), teenager and high school student, as he's going about his life: going to class, studying, and wandering the city as the "friendly neighborhood Spider-man". He's specifically contextualized as a local hero, not an Avenger, so any crimes he spots, any bad guys he runs across, should be local-level as well. This is not a "holy crap, the world is ending" kind of movie (unlike, for instance, the climax of The Amazing Spider-man, for example).

Sure, yes, this is an MCU movie. Tony Stark (Robert Downey, Jr.) shows up in the flick, continuing his mentorship role from Captain American: Civil War, but if you didn't see that movie that's fine -- everything is recapped from Peter Parker's perspective. If all you want from a Spider-man movie is a movie about Spidey being Spidey, doing Spidey things, this is the movie for you. He fights thugs, he quips, he gets in trouble at school and with his aunt. The whole movie is a slice-of-life film about Peter's trials and tribulations protecting his neighborhood.

This perspective on Peter's life is refreshing. We've had so many world-ending issues throughout the MCU that it's nice to not have to deal with something huge and epically scaled. Superheroes don't need to always fight huge villains every day; instead Peter has to deal with a local thug / weapon's dealer (Adrian Toomes, aka the Vulture, as played by Michael Keaton), and while he does occasionally get into troubles bigger than he can handle, the movie always smartly keeps the focus back down on Peter and his personal stake in everything.

That also feeds into the other part of the movie that works so well: it's a teen flick. There were a number of reviewers that described Homecoming as "the MCU's first John Hughes" movie, and I think that is apt. While other Spider-man films have made a nod towards Peter being a student, he's always magically dodging out of school, barely showing up for class, and somehow still getting by (ie, every other Spider-man film Sony has produced). Here, Peter's absences are noticed, his commitments to the school and his friends matter, and he really has to work to juggle his time as Peter and as Spider-man (and, mostly, fail at both to the disdain of those around him). He's just a teenager who wants to continue being a teen while also, you know, being the friendly neighborhood Spider-man. 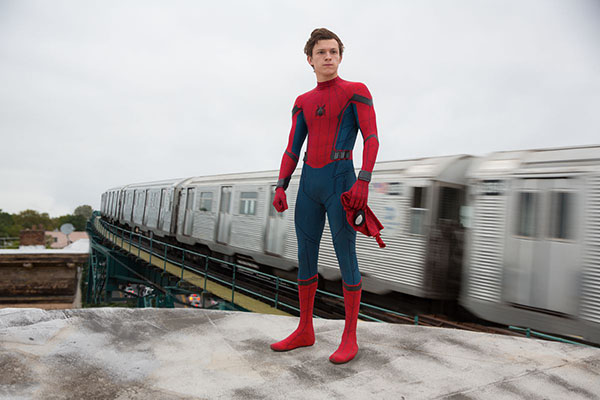 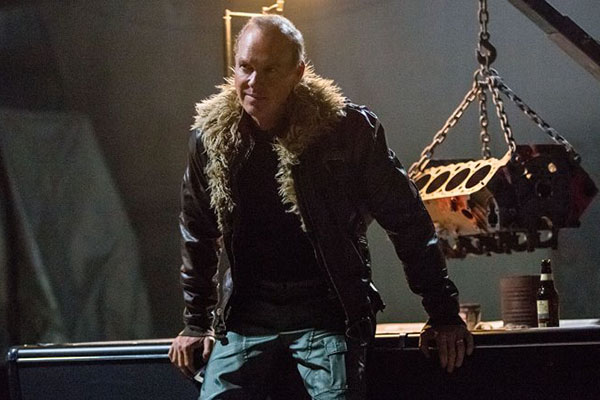 Another nice touch was the fact that this movie isn't another rehash of the Spider-man origin story. We already had two films in recent memory (2002's Sam Raimi Spider-man and the at-times unbearable 2012 Amazing Spider-man) recapping Peter's origins, so Marvel and Sony wisely don't go anywhere near that storyline; they trust that we already know about the mutant spider, the weird powers, all that goes with it. There's barely a mention at all here or in Peter's previous MCU appearance in Civil War. Also not making an appearance? Any iteration of "with great power comes great responsibility". Sorry Uncle Ben, but you won't be cashing any checks from the grave this time around.

Tom Holland, taking over the full-body suit from Andrew Garfield, plays Peter perfectly. He invests the teen with the right level of innocence and energy -- while he'll run the gamut of emotions like any honest human, this isn't an overly broody Spidey. He's an energetic, eager, quippy teenager, played engagingly by the actor. Holland is, honestly, the best live-action Spidey we've gotten yet (and it doesn't hurt that he's much closer in age to the character he's playing than any of the previous Spider-actors have been).

Also enjoyable is a menacing Michael Keaton playing an honestly rather grounded Vulture. Once you accept a world where a man can build his own metal supersuit and fly around fighting terrorists, and also that a kid can get superpowers from a spider, a dude who puts on jet-powered wings to fly around seems pretty mundane. For the scenes he's in, though, Keaton shows real relish, obviously enjoying being the bad guy. He's not scenery chewing, but considering the scope and style of the movie, he toes as close as he can to that line and still have it work.

It really is hard to find anything to fault with the movie. If anything, the effective co-lead, Tony Stark, is almost unnecessary here. His scenes are certainly funny but sometimes the movie comes to a pause so Iron Man can fly in and have a conversation with his young apprentice. Sure, by the big climax, Iron Man (well, his company) is integral to the plot, but they could have easily cut him and any references to him out and found some other way to tie up a similar storyline and it probably still would have worked. Of course, Iron Man is a big draw for Marvel, he puts puts butts in seats, so it's not hard to see why Marvel included the metal man in the movie. 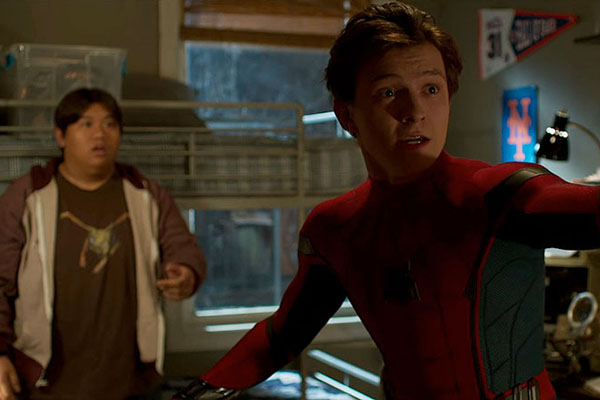 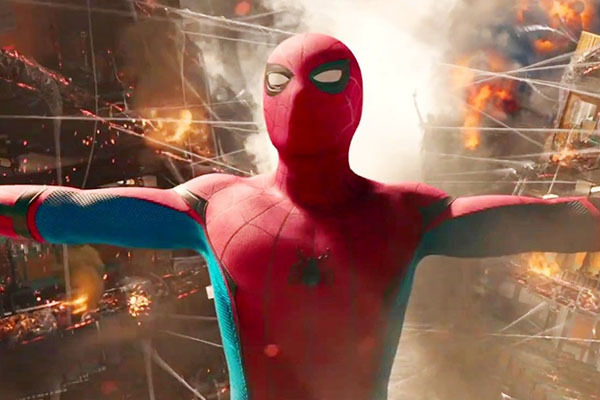 And, I guess, if we're being honest, Spidey's love interest isn't really anything to write home about. While Laura Harrier does good work as Liz (a character that apparently appeared in various Spider-comics who also isn't Mary Jane or Gwen Stacy), the movie isn't really too concerned with her. Liz is a pretty, popular girl, someone Peter can adore and attempt to win over, but he, like the movie, quickly realizes that he can't have the girl and be Spider-man, and so Liz is quickly shuffled out of state before movie's end (although she doesn't meet Gwen Stacy's fate at the end of Amazing Spider-man 2, so I guess that's something).

Still, those are minor quibbles. Spider-man: Homecoming really is one of the best MCU films to come out in a long time (and I've enjoyed just about all of them in recent memory, barring a certain Black Panther). It may even be better than anything Raimi produced, potentially making this the best Spider-man adaptation yet. Now here's hoping Sony can continue this streak with the upcoming Venom live action film (Editor's Note, after the fact: The really didn't) and the Spider-man: Into the Spider-Verse animated film (Editor's Note: they totally knocked this one out of the park). My faith has been restored... for now.