Iron Man, Iron Man, Does Whatever an Iron Can

I feel bad for the Marvel Animated FeaturesBefore the Marvel Cinematic Universe was even a thing, before Marvel could even hope their theatrical aspirations would take off, the company tried to launch their heroes with a much more modest idea: a series of animated features starring the heroes Marvel had access to. films. These films were meant to introduce the various Marvel heroes to the world but, only a short time later, the Marvel Cinematic UniverseWhen it first began in 2008 with a little film called Iron Man no one suspected the empire that would follow. Superhero movies in the past, especially those not featuring either Batman or Superman, were usually terrible. And yet, Iron Man would lead to a long series of successful films, launching the most successful cinema brand in history: the Marvel Cinematic Universe. started up and these films were quickly forgotten. Not that there wasn't good reason to forget these films since, honestly, they've all been pretty bad so far (and yes, I'm including today's review topic in that assessment). Still, while the quality of the films may be questionable, at these the films themselves are earnest in their attempts to adapt the Marvel comics into theatrical form. They bring in all the material they can, warts and all, to give fans honest interpretations of the source material. That may be where the problems begin, honestly. 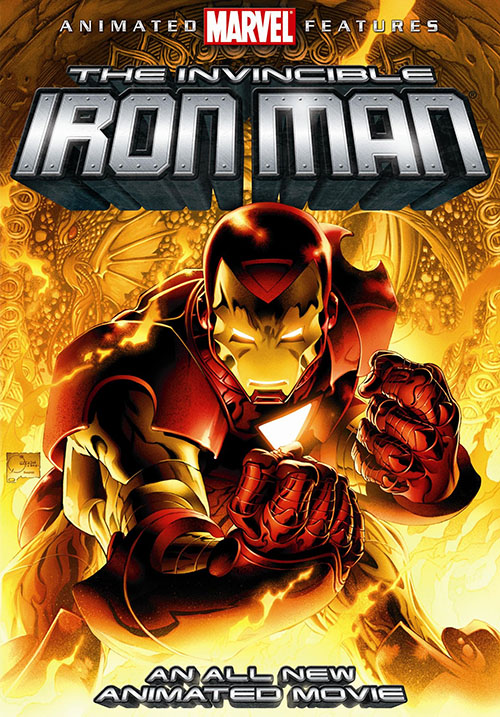 Films are different from comics, which really should seem like an easy assessment to make. That's not just because of the comic layouts, of course, which are notoriously hard to adapt to the screen (they work as storyboard but shouldn't necessarily be used to plot out all the camera angles of the film), but also because the page has to wow you with its style while the movie can rely not just on sights but also performances. A story on the page will look very different when in the hands of an actor who can craft the material around their performance, making the characters into their own creation. We saw that in the last two films, Ultimate Avengers and Ultimate Avengers 2: Rise of the Panther with its wooden characters and bland voice acting, but it's even more obvious here: Tony Stark is an asshole and it's only by Robert Downey, Jr.'s stellar performance that the character comes across as an endearing personality.

The film opens with James "Rhodey" Rhodes working at a dig site in China. He's there managing the project for Tony, working to excavate an ancient Chinese historic site. However, the site is constantly attacked by protesters, some of whom are violently against the Americans being anywhere near the site (among various reason). There are deeper matters at play, of course, as Rhodey (and Tony, for that matter) don't realize that be excavating the site they could release the Mandarin, a ancient sorcerer who was trapped in this grave for centuries. All Tony knows, when he shows up to guide the site, is that there are people threatening his workers and getting in the way of his project. And then he gets attacked by the terrorists, nearly killing him with the very weapons Stark Industries creates. Wounded, Tony and Rhodes, with the help of a wise Chinese healer, have to fashion a way to keep Tony alive despite a dangerous heart injury. And then they have to break out of the terrorist camp that's holding them, which requires Tony to invent his Iron Man suit and deal out the damage.

Unfortunately while Tony and Rhodey are able to escape, the dig site was disturbed enough to unleash the goons of the Mandarin, four elemental guardians of immense power. These guardians are on their own quest to find five magical rings -- when put together the rings will revive the Mandarin, giving him form and power. Tony has to suit up to fight the elementals while also dealing with an angry Chinese government and his own company, both of which seem to be framing him for selling Stark armaments to the very terrorists that attacked him. It's a lot for Tony to do and absolutely no time to waste if he's going to save the world.

Seriously, Iron ManBillionare Tony Stark has a secret: while he travels the world by day as a playboy philanthropist and head of Stark Industries, he combats the evils of the world as the armored Iron Man. is not a likable character. We think he is because of the work Downey, Jr. did as the character, but Tony is an alcoholic, womanizing, selfish ass. Downey, Jr. made those traits into assets, playing the character with impish glee, but it takes the right performance to sand off Tony's rough edges and make him into a hero. The animated version of the character from this movie has none of that charisma or impish delight, so the character goes back to being a total jerk. 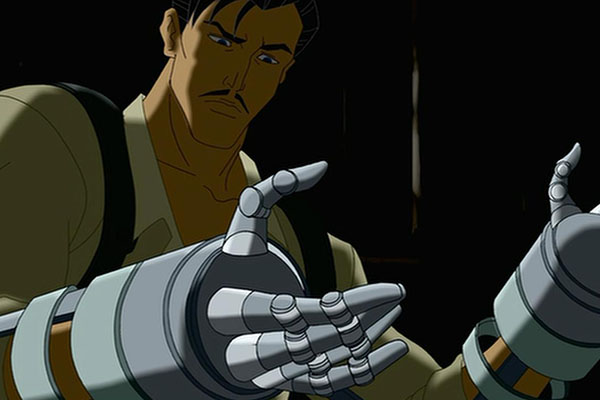 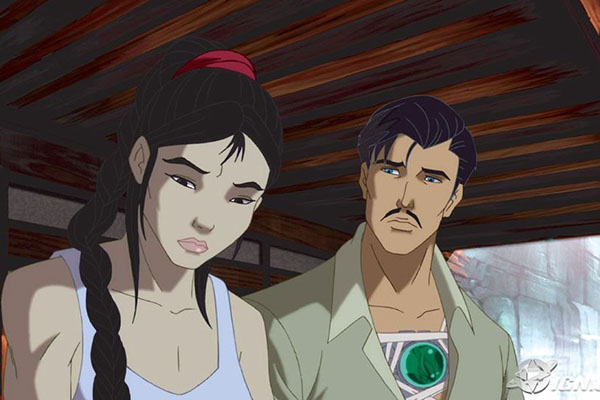 Credit to the movie that it doesn't try to change his character too much -- he starts in the same place here in this movie as in the 2008 Iron Man and goes on a similar path -- from smug business man to still-smug business man with a conscience -- but the Hollywood movie was able to sell that growth and change better than this effort. Tony doesn't seem to grow or change at all in this film, and even his injury, imprisonment, and escape don't seem to inspire any big evolutions for the character. In fact, in this film, we learn Tony had already been building Iron Man suits for years so his "inspiration" to create one in a cave in China is barely inspired at all. He starts and ends in the same place.

This hobbles the character, but he's certainly not aided by Marc Worden as Tony's voice actor. I don't think Worden is bad as a voice actor, he's perfectly fine, but to sell and character like this you have to embody him body and soul. Worden's Tony comes across as a little to abrasive, a touch too assured of his own excellence. Even when he's on the ropes, on the run, and down for the count he still views himself as the best person in the room. There's no doubt, no moment of grace, in the performance from Worden, so while he certainly nailed "smug Tony" he failed to give us "human Tony".

Even if Tony had been better, though, I don't know if it really would have saved this film because, honestly, The Invincible Iron Man is a mess from start to finish. The terrorists that kick off the film are a poorly defined group of face less men with one over-the-top scenery chewer leading them. We never really understand their goals, or what they truly want, just that they're somehow ready to assure the Mandarin's resurrection for... reasons. They're better than the other villains of the piece, the Stark Industries board of directors, who seem to work to undermine Tony at ever step despite the fact that, as they acknowledge, the company had never been more successful than right now, under Tony's full control. He's a brash playboy, which they seem to hate, but the world loves him and he's, generally, very good at his job, so what's their problem?

The film's biggest issue, though, is the Mandarin, the big end boss of the piece. His four elemental guardians are cool in design but lack any actual personality. They're blank voids for Tony to kill simply because they're in his way; otherwise, they add nothing to the piece. The Mandarin, too, doesn't actually have a personality, simply showing up at the climax of the movie so Tony has someone even bigger to punch in the face. The movie is certainly big on pyrotechnics, with lots of scenes of punchy-explosions going bang, but the heart is missing from everything in the film, from Tony, from the villains, and from everyone else. 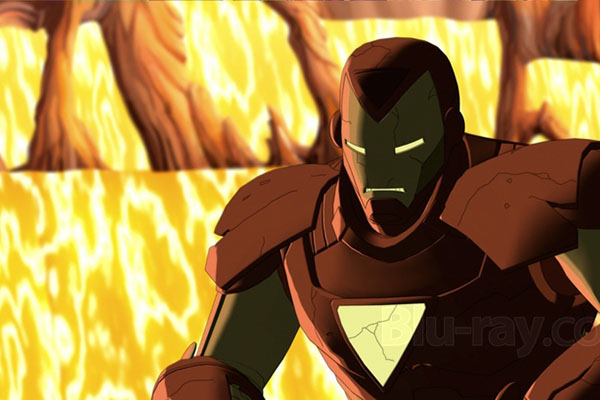 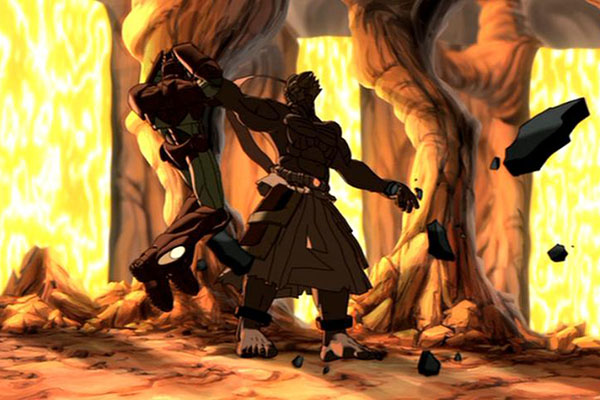 It leaves The Invincible Iron Man feeling like a half-baked film. We get a lot of big moments without any characters to care about, a lot of "this leads to that" storytelling without any depth to the plot. Every scene boils down to Tony reacting to the next danger but the film never once gives us a reason to care. Tony battles everyone only to end up right where he was when the film started. While the movie might be pretty, it's one of the most shallow Marvel films I've seen yet. This leaves us 0-for-3 with the Marvel Animated Features so far. I really hope these films get better at some point because this is becoming quite the slog.