To Infinity... of the Stones!

With the release of Avengers: Infinity War, Marvel is starting the end game for their big, multi-year cinematic plan. When they started it up, most people didn't think a cinematic universe would really work, and while there have been the occasional stumbles (the lackluster Incredible Hulk, the only okay Avengers: Age of Ultron), the whole plan has pretty well been a success. Marvel has dominated the movie world (although I will note that their efforts on TV have been more hit-or-miss). 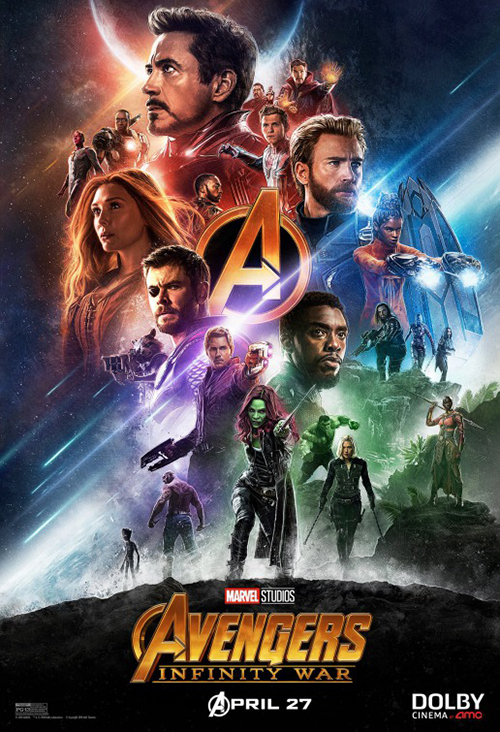 To kick off this last part of their last Phase (Marvel's term) before the whole Marvel Cinematic UniverseWhen it first began in 2008 with a little film called Iron Man no one suspected the empire that would follow. Superhero movies in the past, especially those not featuring either Batman or Superman, were usually terrible. And yet, Iron Man would lead to a long series of successful films, launching the most successful cinema brand in history: the Marvel Cinematic Universe. apparently goes through some big upheaval, Marvel released Avengers: Infinity War 10 years after the first movie that started it all, Iron Man, came out. Not that we're done with this Phase just yet -- this third Avengers film is just the first part of a two-part cinematic event, the second half of which comes out next year. That already positions the movie in a weird place: it has to set up a bunch of storylines in the movie, tying in everything that's come before it (at least since Age of Ultron) and then give some kind of satisfying ending that's not really an ending because the real ending is in the to-be released Avengers: Endgame.

Anyone familiar with movies and sequels should feel a certain amount of trepidation at the thought: this is the middle movie in a planned series, and there aren't a lot of planned middle-movies that have been successful. The most successful, Star Wars: The Empire Strikes Back, is the exception, not the rule. More often than not, middle movies end up like wet cinematic farts (looking at you Matrix Reloaded), either because they can't handle the strain of all the setup and potential that won't pay off until later, or because the third film fails to deliver the goods (also looking at you, Matrix Revolutions). Sometimes middle movies fail on both counts at once (and when that happens, they often sink the whole trilogy they were supposed to continue -- the Fantastic Beasts movies are struggling with that right now).

It's a truly difficult feat to build a middle movie like this and have it be satisfying of its own accord. Thankfully, Marvel seems to have done just about as good a job as they could have with Avengers: Infinity War. There are a staggering number of characters that have been involved in the various Marvel movies over time and the film deftly re-introduces them to viewers.

Even if you don't know who Doctor Strange is (because you skipped his decent but forgettable movie), he's paired up with Tony Stark (who everyone knows because he's basically the main character of the MCU) so the two can snark at each other and show off the contrast of their abilities (magic vs. technology). Thor is paired with the Guardians of the Galaxy, Spider-man gloms on to the Tony Stark plot line, Captain America and Co. team up with Black Panther, Vision, and Scarlet Witch. The characters works well together, their time together never feels forced, and everything moves as smoothly at it could, fleetly getting to the plot of the movie as quickly as it can. 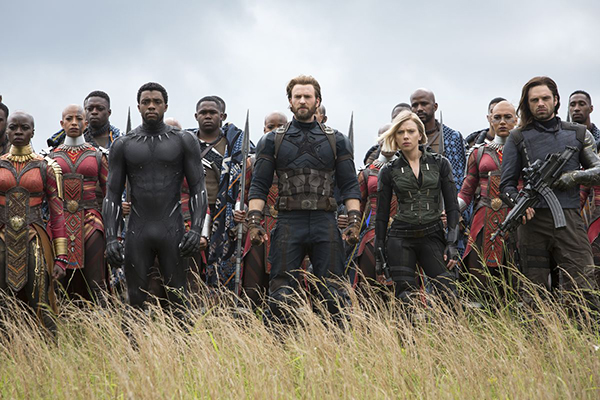 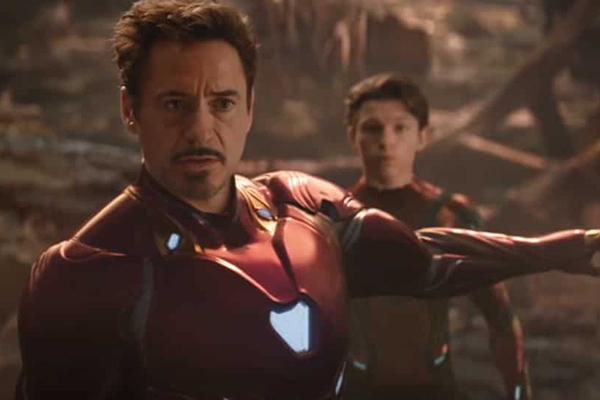 What also works for me is that the main character of the movie isn't Tony Stark or Thor or any of the heroes but, weirdly, Thanos. He makes appearances in each of the hero plot lines but a good chunk of the movie is dedicated to him, following him on his journey to try and collect all the Infinity Stones so he can cleanse the universe of half of all life (for reasons that actually make way more sense than whatever Ultron was up to back in the second Avengers). It helps that Thanos is compellingly played by Josh Brolin who gives the villain not only menace and gravitas but also heart and emotion. This isn't some quippy villain who shows up, does some evil, and then is shunted aside until the next action sequence (you know, like Ultron) but a real person given real time to find life in the film.

Plus it doesn't hurt that we've been getting hints about Thanos for years now, pretty well since the first Avengers movie, so this is a menace we've had time to get used to. We knew Thanos was coming, and just the anticipation of the event helped to secure him in our minds as the big bad in a way few other Marvel movies can manage (which, as some have noted, may be why so many Marvel cinematic villains are pretty lackluster).

Not everything about the movie works. There are moments of character building that feel really rushed, especially if you've seen all the other movies that tie into Infinity War. As one example (which doesn't spoil much at all), Spider-man teams up with Iron Man despite Tony telling him not to. Eventually Stark just gives in and makes Peter an Avenger, at which point Peter then gets this big grin on his face, as if to say "oh gosh, I'm really an Avenger now?" Except at the end of his movie, Spider-man: Homecoming, Peter was already offered the chance to be an Avenger and he turned it down because he wanted to focus on his neighborhood. Sure, having Peter go to fight a big galactic threat makes sense (as he says in the movie "I can't be the friendly neighborhood Spider-man if there's no neighborhood left"), but this "oh gosh" moment feels out of character for where he's at on his journey.

There are moments like this throughout the movie -- an event early on cheapens the ending of Thor: Ragnarok a bit; the Guardians of the Galaxy are split up, forcing some of the relationship plots to movie faster than they should have considering where they were at the end of Guardians of the Galaxy Vol. 2. None of it ruins the movie, but they're little nicks against the pacing and plotting of the film. It's like this movie needed to be longer just to fit in all the character beats that were needed except, of course, that would totally not be realistic (the movie was already long enough and I'm not advocating in any way for it to be longer). 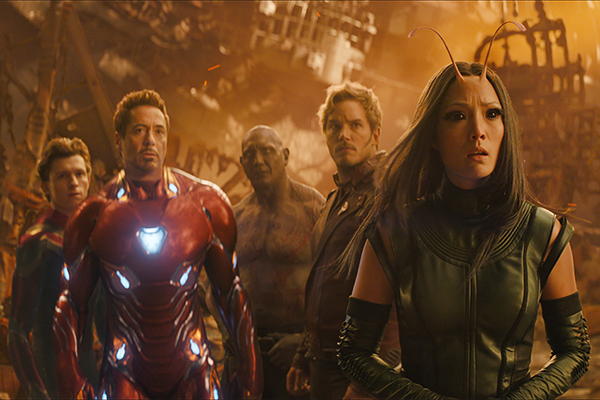 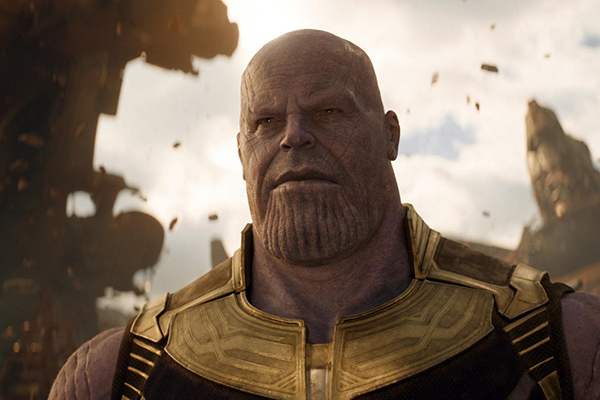 Then there's the CGI. Marvel has, as of late, had a weird issue with their CGI. When it comes to backgrounds, and big objects, or just simple effects from a hero (like Doctor Strange's magic circles) everything looks great. But living characters are another matter (and this isn't just Marvel's issue -- just look at Steppenwolf in Justice League as an example of how bad DC is at this as well). Thanos, as well acted as he is, is still glaringly CGI, as are his minions. I get that Thanos is a huge guy so some trickery had to be done to fit him in the film. That said, the Lord of the Rings series managed to make people seem larger and/or smaller than they are in real life so why couldn't they just paint Josh Brolin purple and do the same thing for Thanos? And most of his minions where human-sized, so why were they CGI at all? Is it really that much more cost effective to make them CGI than to do the makeup?

It wasn't just the characters though, but action sequences as well. Any time they stop using an actor and switch to a CGI version of the actor/stunt person for cool flying and flips and kicks, you could just tell it was all completely fake (as in no wire work, no real people involved). Everything looks floaty and weird which then saps some of the consequence from the action. I also have to single out Bruce Banner in the times he's using the Hulkbuster Iron Man suit (I'll leave the why of that up to you to find out just in case you haven't seen the movie yet); when the suit opens and he's sitting there in the cockpit of the suit, the lighting is all wrong. He sticks out painfully, which ruined the scenes where they did this.

The worst thing about the movie, though, is that the epic ending has some of the drama drained out of it simply because I know Marvel's plans for the future. Again, I won't go into details so if you want future spoilers you'll have to look them up yourself, but suffice it to say that a number of characters die at the end of Infinity War... but there are already plans to have many of them appear in solo sequels down the road. It's kind of hard to care if this character or that character dies when we know they'll be back by the end of Endgame.

Of course, that's comic book logic: don't be too sad if a character dies over here because they'll find a way to revive them in a movie or comic or episode down the road. If you're a fan of comic heroes at all, you already expect death to be a revolving door (just look at the number of times Jean Grey has died only to come back for a clear example of this trope). 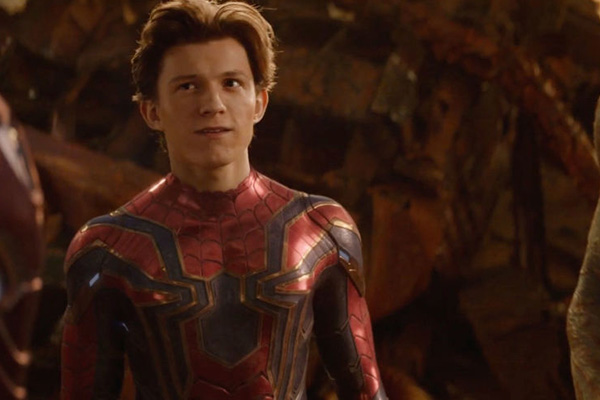 On the whole, though, I really did enjoy Avengers: Infinity War. My gripes are relevant because without these issues (that probably seem much more glaring to me than to the viewing public as a whole) a great movie would be phenomenal. The movie was a huge success, both financially and artistically: it's a satisfying middle movie when so few of those exist, and for that alone, Marvel should be congratulated.