Okay, let's face it. The concept of making a movie about one of Spider-man's most famous villains is pretty out there. We all know Sony has been trying, time and again, to launch their own "Spider-Verse", their collection of shared-continuity movies to get that sweet, sweet movie money. They want what the Marvel Cinematic UniverseWhen it first began in 2008 with a little film called Iron Man no one suspected the empire that would follow. Superhero movies in the past, especially those not featuring either Batman or Superman, were usually terrible. And yet, Iron Man would lead to a long series of successful films, launching the most successful cinema brand in history: the Marvel Cinematic Universe. has. In a way, it's totally logically for them to want their own Marvel universe since they have the rights to Spidey and all his crew. 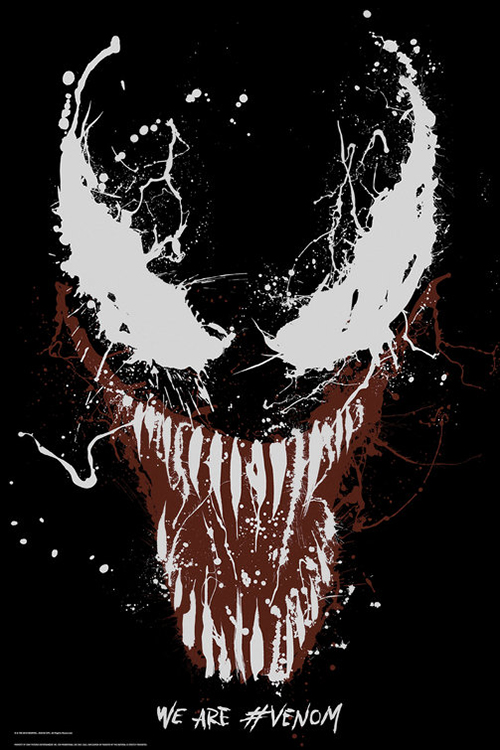 It's still stupid, though, because they already have a shared-universe tie in, and he's called "SpidermanSure, DC Comics has Batman, Superman, and Wonder Woman, but among the most popular superheroes stands a guy from Marvel Comics, a younger hero dressed in red and blue who shoots webs and sticks to walls. Introduced in the 1960s, Spider-Man has been a constant presence in comics and more, featured in movies regularly since his big screen debut in 2002.". He literally is part of the MCU, and Sony gets to reap all the profits off his solo movies while still getting all the prestige of the MCU. It's not hard to imagine them striking a deal with Marvel for all the Spider-related properties and just sitting back, reaping the sweet Spider-bucks. Instead, they've decided to do their own thing, and that thing starts with Venom.

We start the film with Eddie Brock (Tom Hardy), a one time newspaper report who moved to San Francisco after burning too many bridges in the Big Apple. In the bay city, he's gotten a job as a kind of web-based video reporter doing the "Eddie Brock Report". He has a nice place, is getting married to lawyer Anne Weying (Michelle Williams), and his vid-casts are pretty popular. That all comes crashing down, though, when he conducts an interview with Carlton Drake (Riz Ahmed), a Elon Musk-type figure who made his billions in med-tech before moving on to space exploration. Eddie caught whiffs of the kinds of evil things Drake was into and, when snooping around on his financee's computer, he finds legal documents to back up the rumors, Eddie confronts the billionaire (in what was otherwise supposed to be a puff piece).

Everything then comes apart as Drake ruins Eddie's life. The reporter is fired from his job, gets his financee fired from her job so she dumps him, and since their place was really her place, Eddie is then kicked out on the street, too. We pick up six months later as Eddie, pretty well hitting bottom, just barely sustains himself as the world passes him by. However, a scientist on Drake's staff, Dr. Dora Skirth (Jenny Slate), tips Eddie off about the experiments going on at Drake's lab. These experiments involve taking homeless volunteers (who won't be missed) and binding them to alien symbiotes the company found out on a distant planet -- the people tend not to survive, and the body count keeps climbing. Skirth sneaks Eddie into the lab, Eddie is accidentally bonded to one of the symbiotes, and then he escapes. Now he's running around with an alien attached to him, a voice in his head, and superpowers out the whazoo. He, they, have become Venom.

I like to give every movie a chance going in so even though I expected this movie to be utter crap (considering Sony's non-MCU, non-Raimi, Spider output). Despite my misgivings, I went in with an open mind and looked to find the good in the film and, I will admit, I actually didn't hate it anywhere near as much as I expected. I know that sounds like damning with faint praise, but hear me out. 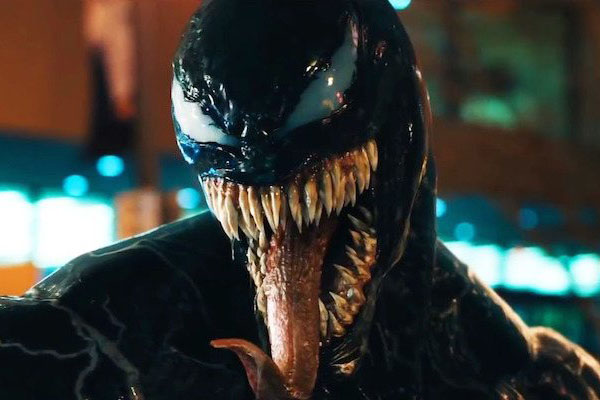 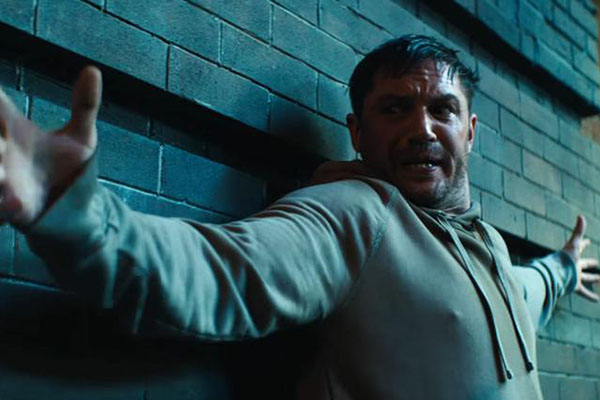 There are two distinct parts of the film, and while they aren't well grafted together, neither part of the film is all that bad. Usually I complain when a film tries to show us a guy hitting rock bottom in the most ham-fisted way, shorting the "bottom" part just to get him back on the ride to redemption. Venom doesn't short-circuit the process as it takes pains to show Eddie's life before and after the fateful interview, and it also makes it clear that as much as Eddie's change in circumstance comes at the hands of Drake, it's really all Eddie's fault. He could have done the interview on the up-and-up, he could have worked to get a source that wasn't morally grey and legally compromised. He didn't, so his descent to the bottom is earned and fair. The film takes its time with this section, and it lets Eddie wallow for a while before giving him his change in circumstance.

The real problem with this section of the film is that it makes Eddie into a total ass. He doesn't come off well, especially in the hands of Tom Hardy. Hardy is a fine actor, putting in good work as Max in Fury Road as well as also not being the worst thing about Star Trek: Nemesis (talk about damning with faint praise). Other times, though, something goes wrong and he just doesn't really get the character. He comes across, these times, as mush-mouthed and passive, someone reaction to crap going on around him, mumbling his way through it just to get by. There's a reason, for instance, no one praises his performance in The Dark Knight Rises, and his Eddie Brock is no better.

Thankfully in the latter half of the film, once Eddie merges with the symbiote (who calls himself "Venom") the film picks up steam. Eddie is still weirdly passive but the symbiote, and the film, take over, forcing the character through the various action beats. It's at this point where Hardy's performance actually works because having this big, bum guy get dragged around reluctantly by the hulking black alter-ego actually makes from some pretty amusing scenes. I wouldn't really call it a great performance, but it's certainly a weirdly entertaining one.

The symbiote has to do a lot of work, too, because so much of the movie around it just doesn't work. Riz Ahmed's Carlton Drake is critically underwritten, a telegraphed bad guy with a generic, billionaire past but no motivations outside of his lab. He wants to "save humanity" but he goes about it in the most ham-handed, villainous way that it's surprising Eddie's expose/hit job is the first such piece to seemingly ever come out about the guy. He still gets more to do, though, than poor Michelle Williams. Her Anne Weying gets to stand around like a generic love interest, the girl who got away that Eddie, clearly, is going to get back (if not in this movie than in a future installment). She's given very little agency and, even the times where she gets to do something, the movie very quickly has to steal it back, relegate her to the sidelines so Venom can go out and have more fun with the boys. 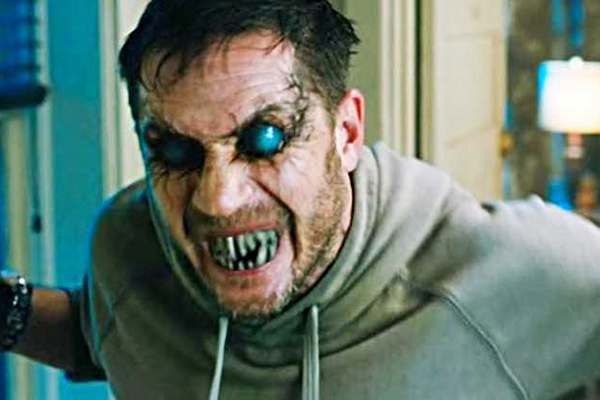 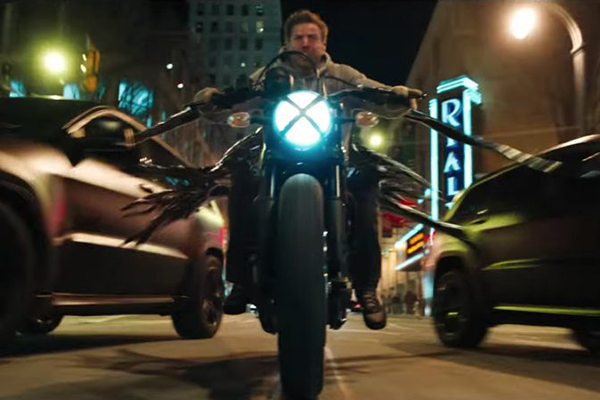 Then we come to the symbiotes, CGI creations that feel fake an inconsequential. It is always a gamble when CGI is used for action sequences as artists just can't create in a computer things that look anywhere near as real as even basic puppetry (for a good comparison, see the 1982 and 2011 versions of The Thing). While Venom is interesting as a character, he's much less convincing as a special effect. To compensate for this, the film elects to double-down on the number of symbiotes, making the final battle a one-on-one battle between Venom and a bigger, evil-er version called Riot (falling right into the trope of making the villain another version of the hero).

It doesn't help these sequences that every battle with the symbiotes (and really every action sequence in general in the film) is choppy and hard to follow. The action is, in short, bad, and since this is a superhero movie, bad action is kind of a deal breaker.

Not that the symbiotes make a whole lot of sense in general anyway. So Drake has a spaceship that can travel to distant planets, and there they find alien symbiotes. Somehow these creates are able to survive on their own but, on Earth, they have to bond with people or they will die. Yet there aren't any other kinds of aliens on the symbiote home world because, if there was, wouldn't the expedition have brought those back, too? And if the symbiotes can instantly merge with any other creature (as it's shown, time and again, then can do), shouldn't they have forcibly merged with the astronauts the second the humans touched down on the planet? Why willingly let four of them get scooped up and taken to an alien planet that might be inhospitable to them? There are logic holes in this depiction of the symbiotes the movie never satisfyingly addresses.

And yet, despite all of this, I found myself enjoying Venom. It's crap as an action movie, it's pretty wretched as a superhero film, and it's not even all that great as a redemption movie (Eddie gets a symbiote and then, somehow, suddenly all is forgiven). It's not bad as a buddy comedy, though, and despite all the flaws I was watching on screen, I really liked the interplay between a boy and his symbiote. It's a terrible film, but it also really doesn't try to be high-art. I feel like I got my matinee money out of the film, and considering how bad I figured the movie would be, I figure that's a pretty good deal.