Get Ready to be Punished

As I've noted a time or two, I am not an anime fan. I do try, upon occasion, and there have been some works done in the anime style that I haven't hated (most of them involving vampires or giant robots coming together to form even larger robots). Most of the time though I find that the stories told by anime studios simply don't hook me. Sometimes it's the way the story is told, sometimes its the plots themselves, and sometimes I feel like the characters don't make sense within in the context of the story. There's generally something that ruins it for me. 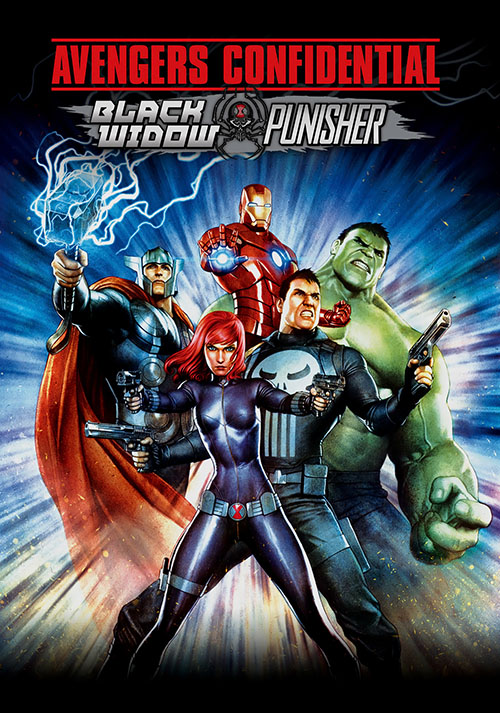 Going into Avengers Confidential: Black Widow & Punisher I didn't even realize it was going to be an anime. This was a film I picked up a while ago that said "AvengersMarvel's answer to DC's Justice League, this team features many of Marvel's biggest superheroes working together to protect the world and avenge its evils." on it and I grabbed it. Then it sat on my shelf for years because I had other stuff to watch (and then, when this site launched again, other stuff to review). I popped it in recently for some Marvel related content (as I cover a lot of stuff from DC ComicsOne of the two biggest comic publishing companies in the world (and, depending on what big events are going on, the number one company), DC Comics is the home of Superman, Batman, Wonder Woman, and just about every big superhero introduced in the 1930s and 1940s. and I occasionally attempt to be even handed). It was only after watching it, and hating it, that I elected to go and look up what happened with this work and realized why I hated it: it's a Marvel anime. Of course it is.

Produced by Madhouse, a Japanese anime studio, this was a production for Japanese and American audiences designed as a kind of follow-up to the series of "Marvel Anime" titles they produced. The work, titled Abenjazu Konfidensharu: Burakku Wido & Panisshaa in Japan, is pure and total anime. Had I known that going in I probably wouldn't have even watched the film -- I attempted to get through the Blade anime and, despite the presence of a bad-ass black character and lots of vampires, I couldn't even make it past the first episode of that train wreck. There's likely an audience for these works but I'm not it. Watch this film I did, though, so it's getting reviewed; there's no stopping this train once I'm on it.

In the film, we see the Punisher, Frank Castle (Brian Bloom in the English dub), chasing down a low-life criminal, Cain (Kyle Hebert). He nearly kills the guy, as is the Punisher's way, but he's interrupted by Black Widow, Natasha Romanoff (Jennifer Carpenter), and then a group of SHIELD agents. Apparently Frank managed to stumble his way into a SHIELD sting operation and, due to his actions, scuffle the whole thing. When Nick Fury (John Eric Bentley) shows up he manages to convince Frank to join up with Natasha to chase down not only Cain but also the men he works from, the evil organization Leviathan. Frank is convinced as he an Nick had some times, fighting side-by-side, back in the day and and you never forget your battle buddies.

Thus commences a whirlwind expedition across multiple countries as Black Widow and the Punisher try to chase down LEVIATHAN and find the people operating the organization. What they discover along the way is that LEVIATHAN is capturing SHIELD field agents and experimenting on them, turning them into mindless super-powered soldiers. The whole operation is spearheaded by Egghead, Elihas Starr (Grant George), a former lover from Natasha's past who quit SHIELD due to the fact that he never felt good enough to be with Natasha. Now he's remade himself (quite literally) so he can try to win her heart, but the quickest way to a woman's heart is not via bio-experimentation of kidnapped soldiers, and he only manages to push her further away. Now the two heroes have to find a way to stop Egghead, and his whole organization, and free all the people they've captured, if they can. 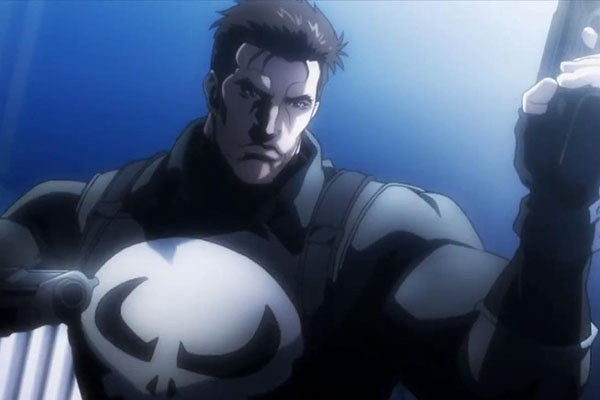 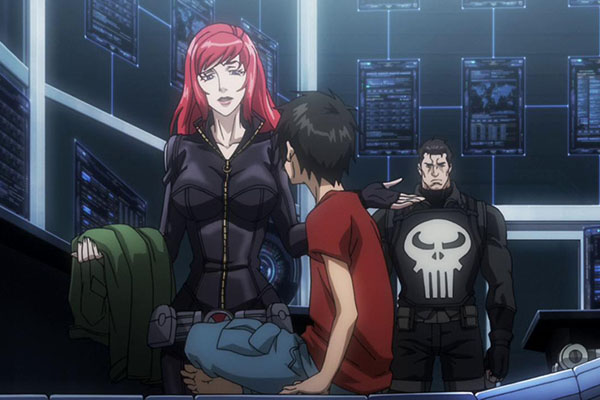 I have a number of problems with this film and it all comes down to the three things I listed at the top of this articles: pacing, story, and characters. For starters, the pacing on this film is seriously out of whack. Our heroes will meet up somewhere, fight, and then just talk for a long period of time. Then it's off to the next location for a quick fight before everyone stops to talk again. Dialogue is great, and is the most effective way to get into the head space of a character, but the way this film handles it is to stop everything to have a long exposition dump, over and over, killing all the pacing for the film. There are graceful ways to space out a story, Avengers Confidential just didn't know how to do it.

Beyond that, though, the story is about as generic as it gets. It's an evil organization capturing people so they can be turned into super soldiers. That sounds like HYDRA, let alone everything going on in Black Lightning in the ArrowverseWhen it was announced that the CW was creating a show based on the Green Arrow, people laughed. The CW? Really? Was it going to be teen-oriented like everything else on the network and be called "Arrow High"? And yet that one show, Arrow has spawned three spin-offs, various related shows and given DC a successful shared universe, the Arrowverse on TV and streaming., and it just doesn't work here. We don't know any of the spies that are getting capture so there's never any personal stakes connected to this story, and we barely know the villain before he's revealed either, so we're just taking what the characters tell us at face value and have to get engaged with it because the film tells us we're supposed to. Perhaps if the evil organization were one we knew from other media, like HYDRA, we'd care a little more, but this all comes across as a Eurotrash group doing generic evil things, and it simply doesn't play.

And then there's Egghead, and here is where I really start to have issues with the story. He leaves SHIELD, and Natasha, so he can go "make something of himself that would be worthy of her love." Considering he worked for SHIELD, and you would presume knows the woman he loves at least a little, I don't see how he could think joining up with an evil organization and doing vile things is supposed to make her love him. Beyond that, he gaslights her the whole time. "You will love me! I did this for you! This is what you wanted!" He's an aggressive and egotistical dick and Black Widow, time and again, just rolls over. "I do love you, but..." is a common refrain. It's awful.

Not that the film gets the characters of Natasha or Frank Castle right at all. In the case of the Punisher, he's about as generic as the movie. He's a short-sighted prick who has one defining character trait: kill Cain. Every time Cain comes on his radar he wanders off to pursue the bad guy, no matter what's going on or whatever it fucks up the mission and could get him, and Natasha, killed. He's an idiot and you have to wonder how he's survived on the streets of New York for any length of time, let alone after killing a bunch of dudes and getting a price put on his head (and any number of warrants issued for his arrest). 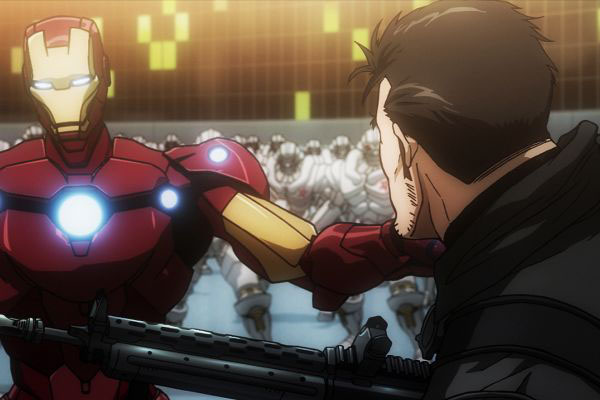 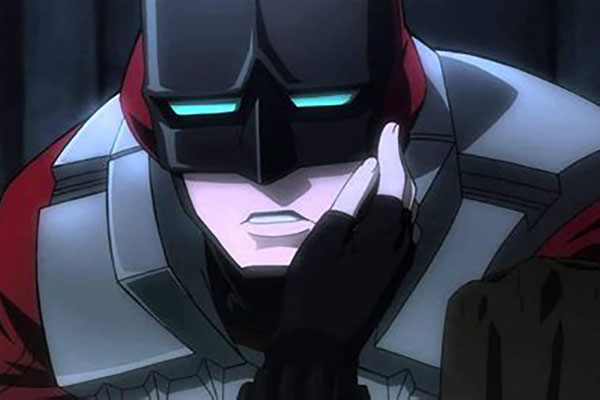 Black Widow, meanwhile, barely seems like a competent agent. This film treats her like a weak woman, unable to take down any of the men she fights, let alone able to do it with the style and grace we've come to expect from SHIELD's best infiltration agent. She's also emotionally weak, unable to read people, unable to see the bigger picture, unable to do all the things you need for one of the top agents in that organization. This whole movie reads like some gross fan-fic that barely understands anything about the world it's adapting. Maybe that's true of Madhouse, but Marvel consulted on this and you'd expect they would have had some word about what was being written. It's awful.

End of the day, I just don't see who this film is for. It's not just an anime but a Marvel anime and it has to be able to please comic book fans because of that "Avengers" name on the cover. This, however, is a lackluster film that would hardly please anyone, let along the hardcore Marvel fanatics. It's just a tired, boring story with okay animation and ho-hum voice acting. Maybe someone could enjoy this, but I doubt there are that many fans of anime, or Marvel, to make this one a success by any metric.