You'll Believe a Man Can Run Around In His Underwear

When it comes to superheroes, very few have a longer or more thorough impact on popular culture than BatmanOne of the longest running, consistently in-print superheroes ever (matched only by Superman and Wonder Woman), Batman has been a force in entertainment for nearly as long as there's been an entertainment industry. It only makes sense, then that he is also the most regularly adapted, and consistently successful, superhero to grace the Silver Screen. and SupermanThe first big superhero from DC Comics, Superman has survived any number of pretenders to the throne, besting not only other comic titans but even Wolrd War II to remain one of only three comics to continue publishing since the 1940s. (two of the only three heroes to survive the comic book sales crash post World War II, and the only two males ones to do so as Wonder WomanLong considered the third pillar of the DC Comics "Trinity", Wonder Woman was one of the first female superheroes ever created. Running for as long as Batman or Superman (and without breaks despite a comic downturn in the 60s that killed superhero comics for about a decade), Wondie has the honor to be one of the longest serving, and most prolific, superheroes ever. was the third heroine). We've been covering, over the last couple of years, Batman's adventures across the decades (eighty years of content and counting) so it only feels right to do the same for Superman as well. 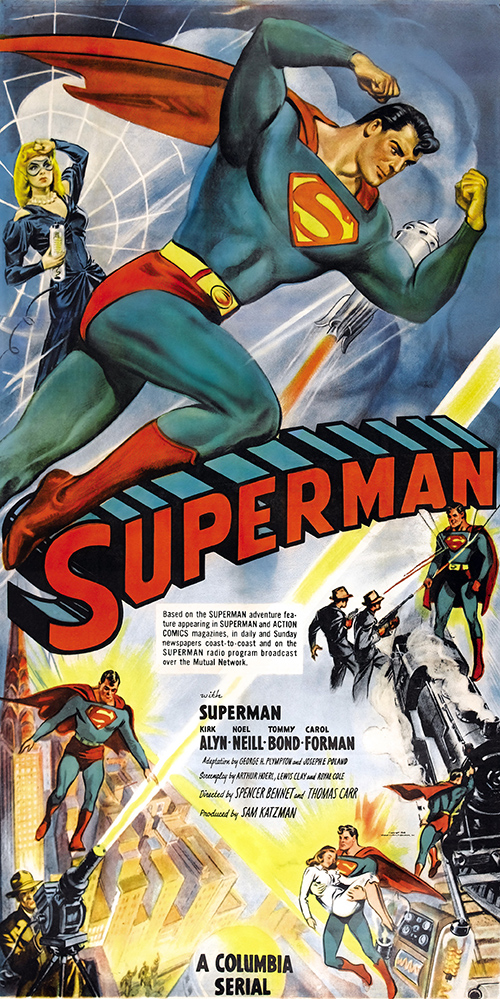 If we go back far enough, Superman, like with the Dark Knight, has adventures on the Silver Screen dating back to the bygone days of serials. These are essentially television shows from before a time when everyone had a TV in their homes. Theaters would air one new serial a week, documenting the latest adventure of this or that hero, and for 15 weeks in 1948 Superman got to have his own, self-titled adventure. It's both about as good, and as bad, as you could expect from a superhero adventure made in this era before the technology was really there to covey anything even mildly heroic properly. It's not bad, but only a true cinephile is even going to want to bother watching these from start to finish (especially when the 1950s Superman series would come out shortly after and did a much better job with the Man of Steel).

As with most Superman media (even the most recent DC ComicsOne of the two biggest comic publishing companies in the world (and, depending on what big events are going on, the number one company), DC Comics is the home of Superman, Batman, Wonder Woman, and just about every big superhero introduced in the 1930s and 1940s. animated film, Superman: Man of Tomorrow), the serial starts off retelling the origins of Kal-El. This is, honestly, acceptable this time around as (discounting the 1941-1942 Fleischer Studios cartoons) this was the first major adaptation of the character for theaters. So we witness Jor-El (Nelson Leigh) plead with the Kryptonian Counsel trying to get them to realize their planet is dying, only for them to shrug it off as the ravings of a mad man. Before the planet can blow, though, Jor-El packs his infant son, Kal-El, into an escape pod and sends the boy off to Earth where, after crashing into the dirt, the kid is saved by Martha (Virginia Caroll) and Eben Kent (Edward Cassidy). They raise the boy (and then die of old age off screen), sending him off to be a hero in the city of Metropolis (and he elects to become a reporter so he can have his finger on the pulse of the news).

Arriving at Metropolis, Clark Kent (now played by Kirk Alyn) immediately heads to the Daily Planet in search of a job. Perry White (Pierre Watkin) makes a deal with the inexperienced newbie reported that if he can get a story about a recent cola mine cave in, a story the other reporters Lois Lane (Noel Neill) and Jimmy Olsen (Tommy Bond) have failed to get, Kent will be hired. So, using his own super powers, and his rakish charm, Kent gets to the mine, gets in, and gets the story. This sets off a rivalry between Lane and Kent that is only exacerbated as an even bigger story comes to fruition: the evils plans of the Spider Lady and her machinations to get the most power device on the planet, the Reducer Ray.

Let's be up front about this: the serial is, at times, pretty hokey. The writing often sucks and there are long exchanges of dialogue that are so ham-fisted they go right past funny back to sad again. The whole sequence where Martha, Eben, and Clark talk about how he's going to become a hero, have a costume, and work as a reporter is just a constant, poorly written dump of exposition that makes it sound like the actors are just reading a list of bullet points off a cue card. At times the episodes get pretty bad. 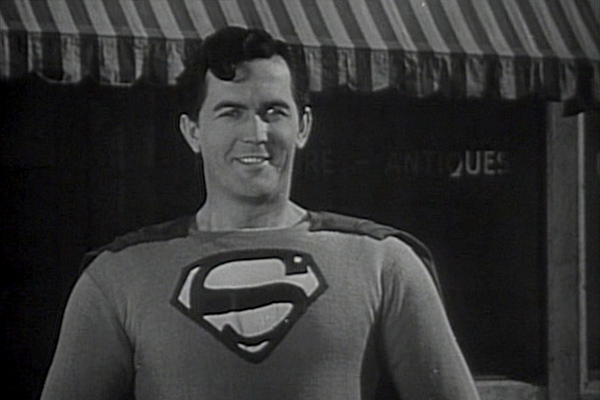 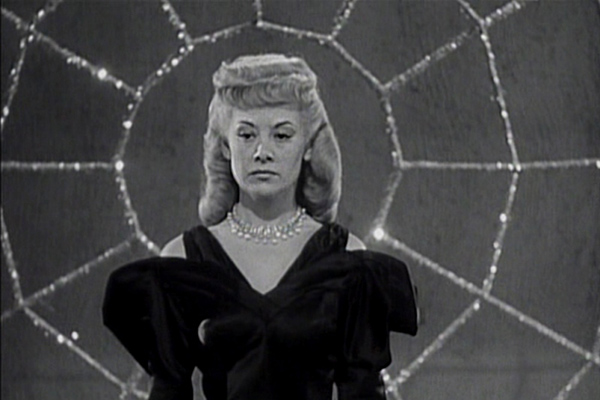 Once the serial gets past the setup and we get into the meat of the story it does pick up some. I wouldn't say it improve tremendously, largely because this film is hobbled severely by its lack of budget and inability to really do Superman justice, but the actors at least fall into a casual chemistry and are able to sell their hokey dialogue a lot better than the performances we get in the first couple of episodes.

Of note, Noel Neill and Tommy Bond are pretty solid as Lois Lane and Jimmy Olsen respectively. I like Neill's spunk here, delivering a Lois that's pretty cut-throat but is able to do it with a smile. Despite a guy that can fly while running around in his underwear, Neill is the real star here. I liked Bond's Olsen, though, and felt that for a criminally underwritten character (Jimmy Olsen never gets anything to do in any Superman story), Bond manages to sell Olsen's right level of heroism and boyish charm.

I also rather liked Carol Forman as the Spider Lady. If you don't know that villain, fear not: she was literally created for this film and has never been used again anywhere (from what I could find). She's basically a mob boss with a weird aesthetic and beyond wanting a very powerful device, the Reducer Ray (a device that is never properly explained and just sits as a bit of sci-fi kit for an era that really didn't understand sci-fi). Her character isn't all that interesting on paper, but Forman plays her with style and charisma. I wish the serial knew what to do with her, gave her more to do and made her more evil instead of basically putting her in one location (her evil base) to cut back to her once in a while, but she's at least performed well enough as a heavy to help the serial.

The big issue is Superman, in part that's because the tech just wasn't there to portray him properly. The serial does what it can, finding ways to cleverly cut from the live actor, Alyn, to a cartoon version drawn on the live action cells, and it does seem pretty convincing (probably it looks stunning to people in 1948). But the films ways of working around its limitations on go so far and eventually you tire of the tricks because they just don't hold up to our more modern sensibilities. This is a serial that has not been helped by the passing of the decades, that's for sure. 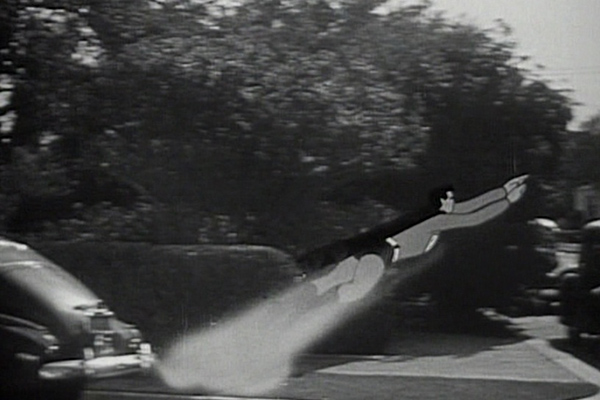 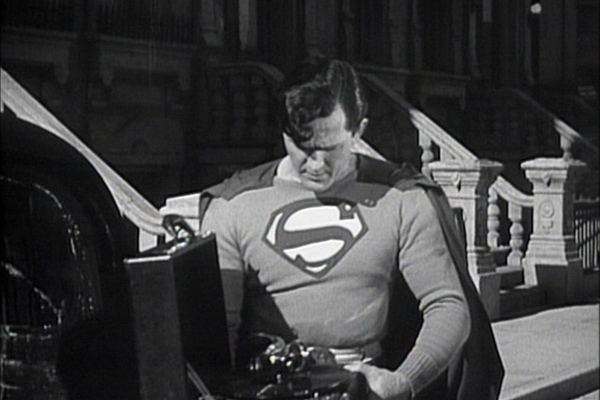 More of a flaw, though, is Alyn himself. He has a charming smile, and he seems tall enough to play a superman from outer space, but in all other respects Alyn is a dude. He has no charisma, no style, and he plays Superman like a giant dweeb. As Clark Kent an actor can play a nebbish loser and its fine, but even as Superman, our Meat Slab Man from the Stars, Alyn's hero is still a giant nerd and it just doesn't work. Alyn was ill-equipped to play the character as a strong hero, and he also didn't have the physical presence to look the part. He prances (really prances) through scenes and never seems strong or tough. This is a very bad performance for our man in Blue and Red (or, really, Grey and Slightly Darker Grey).

In fairness to everyone involved, the plot isn't really in firm, fighting shape either. The serial really has about 45 minutes or so of story -- the Spider Lady wants the ray, Superman has to stop her, and they go back and forth a few times either trying to steal it or getting it back, depending on who we're talking about -- and the serial drags it out over five hours. I supposed if this was done one segment at a time, over fifteen weeks, maybe this wouldn't have seemed like such a slog. However, we live in the age of streaming and binge watching so the way we consume media like this has changed. It's just another way the passing of time has not done this serial any favors.

I liked parts of the serial, and really enjoyed some of the actors, but on the whole this fifteen-episode series just doesn't hold up. Its certainly not as bad as some serials I've watched (an nowhere near as uncomfortably racist as the 1942 Batman serial) but time and age have turned this early example of superhero media into along, tired dud. He might have seemed heroic when it came out, but now the 1948 Superman does the Man of Steel absolutely no favors.