A Day-Glow Batman For All Seasons

When the Hollywood Batman Lost His Way

With the Burton era behind us, we turn to the next two BatmanOne of the longest running, consistently in-print superheroes ever (matched only by Superman and Wonder Woman), Batman has been a force in entertainment for nearly as long as there's been an entertainment industry. It only makes sense, then that he is also the most regularly adapted, and consistently successful, superhero to grace the Silver Screen. films, a pair of semi-sequels that take the Batman out of the dark and Gothic night into a day-glow neon future: 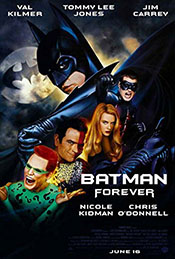 While the 1989 Batman was a roaring success (making over $400 M against a $35 M budget), its sequel, Batman Returns was decidedly less beloved. It's darker tone seemed to turn some people off, while others balked at it's messy plot (and messy everything else). Pulling in "only" $280 M against an $80 M budget, the film wasn't the success Warners wanted, so the suits decided to get in there and ask for some changes. They wanted something more family friendly, something to sell tickets and sell toys. Tim Burton walked, and the series was passed to Joel Schumacher.

There are good things to be said for Schumacher. He's a fantastic producer with a good eye for material that will sell tickets, as evidenced by his string of hits. When it comes to actually directing, though, the man it pretty terrible. Camera movement, edits, flow of scenes -- all the basic language of film -- tend to get abused and ignored by Shumaker. His films don't tend to tell their own story, there's no subtext to his shots or method to his design -- the text the characters say is the only story being presented. And that presentation is, in a word, horrible.

Gone is the Gothic moodiness of the Burton era. In its place is a Gotham that looks like it emerged, fully formed, from a dystopian neon warehouse. Huge buildings and large statues are adorned with neon and day-glow effects as far as the eye can see. It's film as filtered through hypercolor, a searing presentation at odds with the Batman we so recently knew. Shumaker was, apparently, going for something more akin to the campy, candy-colored Batman of the 1960s, and with this new style he certainly gets pretty close.

Aiding this return to campiness are the performances of Jim Carrey as Edward Nigma (aka "the Riddler") and Tommy Lee Jones as Harvey "Two-Face" Dent. Each has a grudge with Gotham: Riddler over his (entirely justified) firing from Wayne Co. and Dent, one-time D.A., because he was horribly burned with acid during a court case. The two team up to take over Gotham and destroy the Batman. And to do this, apparently, they had to chew every bit of scenery they could. 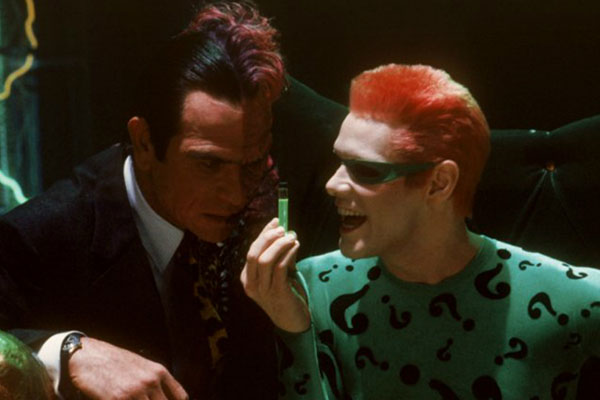 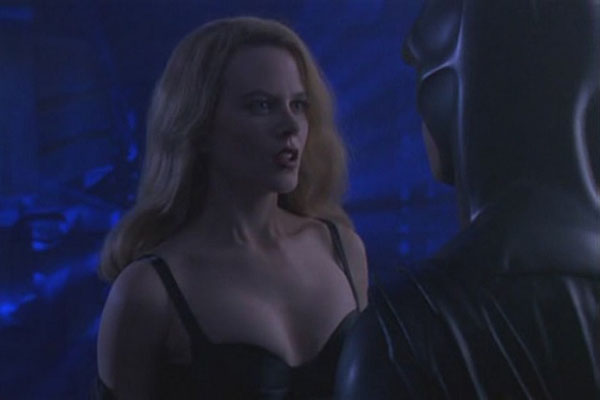 To say the performances of Carrey and Jones are over-the-top still doesn't encompass how beyond campy these guys got. Carrey's Riddler is an unhinged, motor-mouthed, riding-high-on-amphetamines version of his character in The Mask. There's not a single moment that goes by with Carrey on screen where he isn't mugging, or twitching, or trying to turn everything he does into a corny joke. It's beyond tiring. The only reason why his performance isn't the worst thing about the movie is because Tommy Lee Jones steals that honor. He reads every line as if he's blasting the cheap-seats. Monologues are yelled, jokes are screamed, but what is never once presented is any kind of identifiable character.

Batman, at least, isn't just an afterthought this time around. With Burton gone, Michael Keaton, too, left the production. New Batman, Val Kilmer, does an admirable job of at least inhabiting the cowl with something like actual acting. Although his Batman is still little more than the actor in a cowl, his Bruce Wayne does come across as actually troubled. There's a perceptible darkness in his performance that is, largely, because the actor does his best to convey the emotions of the character. Kilmer is a fantastic actor who has slayed it in other roles (such as Doc Holliday in Tombstone), so it's no wonder he could bring much needed gravitas to either side of the role.

Sadly, far too much screen time is given over to Dick Grayson/Robin (Chris O'Donnell). Although the introduction of the character is thrilling, while we watch the Flying Graysons try to stop a bomb (and then see most of them lose their lives in the process), Robin is a barely-sketched character. He's moody because his parents died, and we know this because he rides a motorcycle and skips curfew. He's the Hollywood ideal of a disobedient teen (this despite the fact that O'Donnell looks like he's pushing 30 in the movie). O'Donnell has none of the gravitas as Kilmer and his character is little more than filler to sell new action figures.

The fact is, though, that this horrible production was successful to the tune of $330 M against a $100 M budget. We all went to see it and we have no one to blame for its sequel but ourselves.

When your newest Batman outperforms the previous flick by a decent margin, where do you go from there? The answer, as provided by the fourth (and thankfully final) film in the 1990s Batman series, was "more of everything." The last film had two villains, so let's have three this time. The kids liked the new Robin, so let's introduce a Batgirl, too. And let's make sure to add more neon, more larger-than-life scenery and, to be sure, more actors to chew that scenery up left-right-and-center.

Batman and Robin is a film of excess. We start early on with a sequence of Mr. Freeze (an over-the-top, so-bad-it's-just-bad performance by Arnold Schwarzenegger) as he's stealing from the Gotham Museum. Because he's Mr. Freeze everything is frozen and, worse, we get cold pun after cold pun. "Ice to meet you." "Hey, chill." On and on, with excessive mugging between each line. Thankfully, we think, Batman (George Clooney taking over from Kilmer) and Robin (O'Donnell again) are on the case. After a loving montage of them getting suited up (with lingering shots on their nipple-bedeck chest plates and rubber-suited asses, no joke) we see them skate (truly) into action to fight Mr. Freeze.

We then get a long sequence of them fighting hockey-playing goons, chasing Mr. Freeze into the sky, and then a sky-diving sequence that ends with the heroes somehow chasing Mr. Freeze on air-boards before driving the Batmobile and the Robin-cycle down the arm of a gigantic statue. And this is just the first 10 minutes. We haven't even gotten to a vampy performance from Uma Thurman (as Poison Ivy) that steals plot and style from the much better Catwoman of Batman Returns, nor the abomination of Bane (who never once comes close to breaking Batman's back). 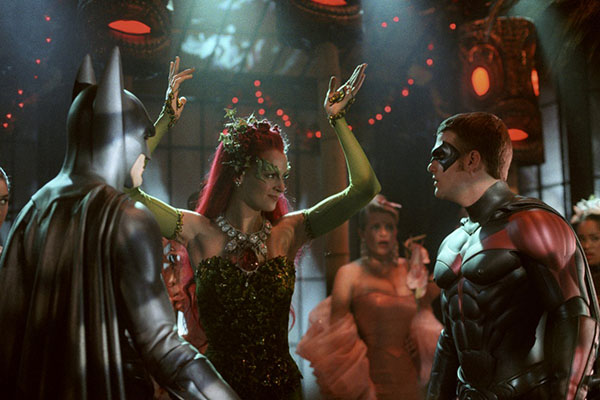 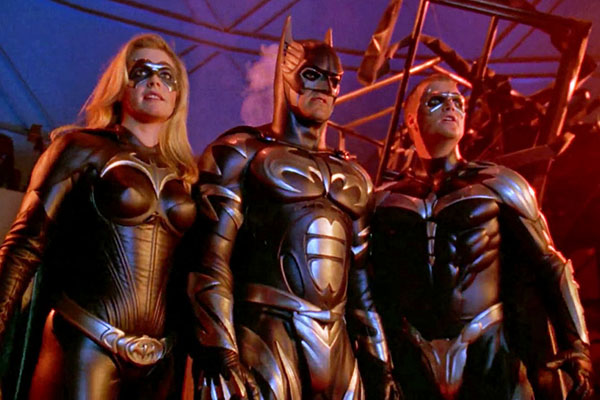 More time is devoted to Robin (who still doesn't have much of a character, or a performance for that matter, from O'Donnell) plus the introduction of Barbara/Batgirl (played by Alicia Silverstone, and her performance also sucks). And there's a love-triangle between Poison Ivy and Batman and Robin (when, clearly, the two men are better suited for each other). The film is just all over the place and it never sits still, never builds up story or setting or character. It's always in a rush to get to the next action sequence, the next joke, the next after the next after the next.

Batman and Robin is just so much that it becomes meaningless. Every time I try to watch this film I get bored early on and struggle to care about anything I'm watching. This is the single worst Batman production (and we've already covered some stinkers).

Truly, it's a relief that I wasn't the only person to feel this way about the movie. Batman and Robin was a relative bomb recouping only $230 M off it's $125 M budget. If a fifth movie had been made (a proposed Batman Unchained that somehow brought back the Joker was in the works before the movie tanked), the trend-line indicated the movie would have actually lost money against its budget, and so the Batman series was put to rest for a time.

Eventually, though, the series would come back, this time in the hands of auteur director Christopher Nolan...