This Used to Be Easier

Frank Miller is a crazy old man. Like, way off the deep end, pretty damn racist, crazy geezer. I doubt anyone has really taken the man seriously in some time (well, anyone that isn't a like-minded MRA ass-hat), at least not since the spectacular failures of All Star Batman & Robin, the Boy Wonder in 2005 and then Holy Terror in 2011. The name "Frank Miller" doesn't have the same level of clout it once did, even if DC continues to let the man produce whatever fever-dream BatmanOne of the longest running, consistently in-print superheroes ever (matched only by Superman and Wonder Woman), Batman has been a force in entertainment for nearly as long as there's been an entertainment industry. It only makes sense, then that he is also the most regularly adapted, and consistently successful, superhero to grace the Silver Screen. tales he wants to write. 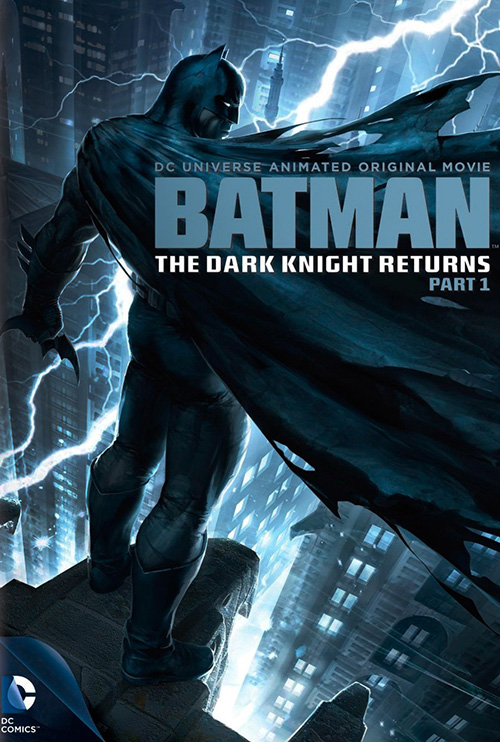 Thing is, for a time there, it did feel like Miller knew Batman better than anyone. He released a couple of seminal tales of the Bat, from Batman: Year One to Batman: The Dark Knight Returns (although originally it as just titled "Batman: The Dark Knight" when it was published as issues). People (read: comic fans) expectantly awaited the release of whatever Miller Batman tales was coming next. He went crazy after 9/11, to be sure, but he had a way with the Caped Crusader before that.

Based on this first run of Dark Knight Returns issues (and not the sequel books that are no where near as good), the animated Batman: The Dark Knight Returns manages to capture the spirit of those issues, distilling them down into a movie that works all too well. Although I wouldn't say its totally free of Miller's baggage (even distilled down and sanitized there's a certain Miller-esque craziness to this first part) this is one of the better Batman animated films DC has ever produced, which certainly says something about the power of the source material.

Set many years after the events of Batman: Year One (uniting these films in a kind of "Millerverse" for the Bat and creating an interesting bookend at the two ends of the Caped Crusader's career), we find a much more introspective (and reserved) Bruce Wayne (Peter Weller). Having hung up the cape many years prior, after the death of Jason Todd, Bruce hasn't been the Batman for some time. He made a promise never to be the Bat again, and he's held firm to that promise even as Gotham slowly sank deeper and deeper into the darkness.

However, seeing the rise of a new gang, the Mutants, and the terror they're causing, Bruce begins to realize that the Bat may be needed once more. The mutants, and their Leader (Gary Anthony Williams), need someone to take them down. But it's when Harvey Dent (Wade Williams), recently healed of his scars and released back into society, once more takes up his mantle of Two-Face that Bruce knows what has to be done. He dons the cape, and the cowl, and heads out into the night to defend a Gotham that desperately needs him. But his methods are more brutal, his actions more violent, and people start to wonder: is Batman the cure or the disease? 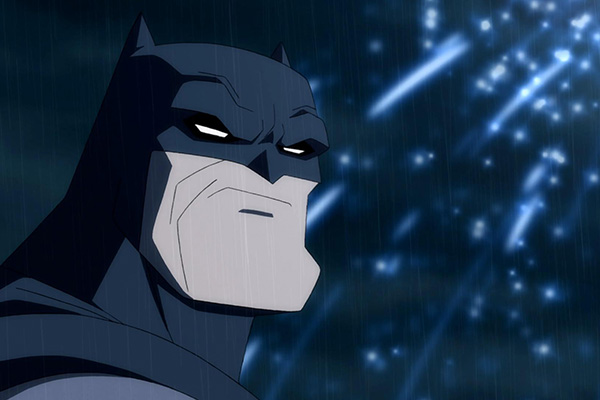 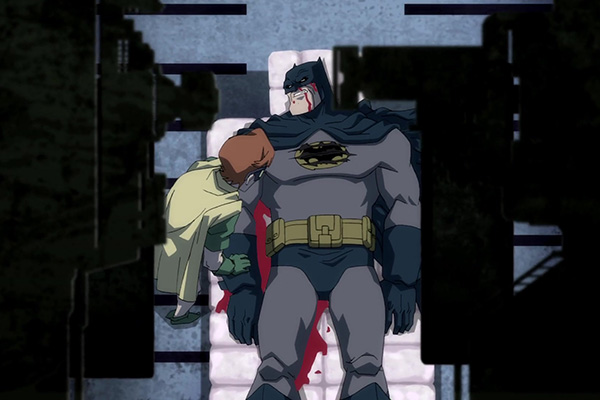 So let's be clear: Miller was never really interested in indicting Batman for his actions. While he populated his comic (and the movie populates its film) with talking heads that argue against the Bat-Man, there are just as many voices that speak out for Batman and his one man crusade of punching evil until it stops. Batman's actions might be brutal but there's never any doubt, from the production's perspective, that he gets things done and that, deep down, he's justified in his actions. Lip service is played, certainly, but neither version of The Dark Knight Returns is really interested in putting Batman on trial.

That's part of the reason why this film focuses on just the first part of the story (the second part is its own film and we'll discuss its perspective in that review) as it's certainly the half that makes Batman into a true hero. The city welcomes him, a new Robin, Carrie Kelley (Ariel Winter), wants to work with him, and the cops are all too happy to see him back on the street. Viewed from the perspective of 2022 there's something a little icky about this version of Batman being welcomed so easily by everyone. A violent vigilante putting people in traction over and over while the cops just stand idly by seems wrong some how. That is the curse of Batman stories, of course, especially now.

As if to side-step that this story introduces a set of villains bad enough to warrant Batman's brutal actions: the Mutants. While Batman has had his fair share of crazy bad guys (pretty much everyone from his Rogue's Gallery), few have been as brutal, as inclined to total wanton destruction and murder as the Mutants. The city government is so scares of this gang that they generally won't even call them a gang, making the Mutants a de facto ruling party in Gotham. Against that a heavy hand of violence is seemingly needed, a brutal fascist is needed to take on these brutal zealots.

In the moment, though, it is easy to get sucked into the story of old man Batman. There is a certain glee to be felt watching him pick himself up, bloodied and bruised with a smile on his face as he's finally gotten back to his true calling. In a hyper-violent version of Gotham, this version of Batman does work. This hero would be too far outside the mainstream to work in any of DC's current books (even as those titles have slowly gotten darker and darker over the years) but he functions well, and is quite watchable, here in this self-contained pocket of the multiverse. 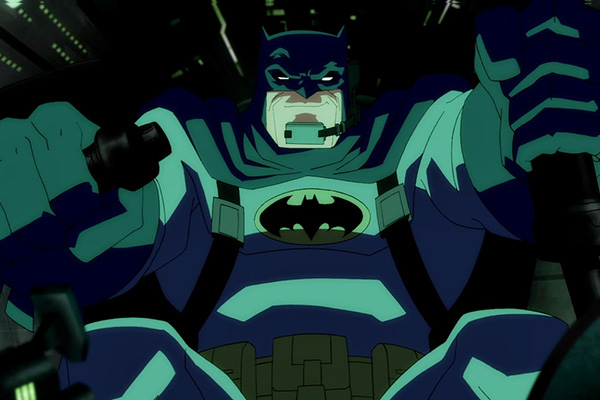 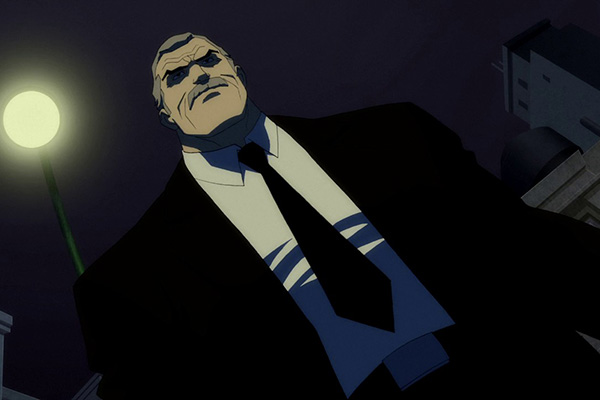 Artistically this film does capture a fair bit of the flair that Miller had in his book. The men are chunky and large, the women more delicate, and it all feels like its trying to work with Millers aesthetic while making that style work on the screen. Miller's "Dark Knight" comics have a very sketchy style accented by Noir coloring, and while that worked on the page it wouldn't work perfectly in animation. The film does smooth that out (which would probably annoy purists), and I think it works well as a blend of Miller's style and the more palatable DCAU animation style (from the "Bruce Timm-verse").

I don't think The Dark Knight Returns, Part 1 is perfect, but it does do a pretty good job of making this story work as a film. What's even more interesting to me is that despite this being a two-part film the creators managed to get this first half to feel like it's own self-contained story. Were you to only watch one half you'd still feel like you got a full adventure. It's very watchable, and at times even fun, tale of old man Batman. While I don't think it's for everyone it does work well on its own and, for the right fan of the Caped Crusader, provides the kind of adventure they're looking for. Sadly I don't recall the second half holding up nearly as well...