The Crazy Clown Gal with the Heart of Gold

I was not one of the dedicated fans of Harley QuinnCreated to serve as "Joker's Girlfriend" as well as his primary minion for Batman: The Animated Series, Harley Quinn quickly grew to be one of the most popular characters of that show, eventually finding a solid life beyond the cartoon in comics, movies, and media. growing up. My first exposure to BatmanOne of the longest running, consistently in-print superheroes ever (matched only by Superman and Wonder Woman), Batman has been a force in entertainment for nearly as long as there's been an entertainment industry. It only makes sense, then that he is also the most regularly adapted, and consistently successful, superhero to grace the Silver Screen. came from the old 1966 TV show and then the Tim Burton films. Harls was created for Batman: The Animated Series and while I liked what I saw of that show I wasn't a devoted fan of it, either. It was good, I just had other stuff to watch instead. 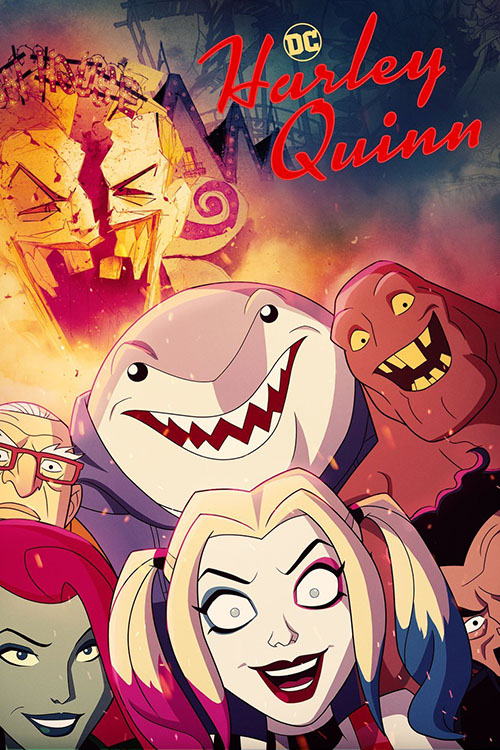 Harley Quinn, though, has entered a kind of character Renaissance, starring not only in her own solo comic series (which has been going for a few years now), but also featured heavily in the DC Extended UniverseStarted as DC Comics' answer to the MCU, the early films in the franchise stumbled out of the gates, often mired in grim-dark storytelling and the rushed need to get this franchise started. Eventually, though, the films began to even out, becoming better as they went along. Still, this franchise has a long way to go before it's true completion for Marvel's universe. Suicide Squad (where she became the breakout star), eventually headlining Birds of Prey (and the Fantabulous Emancipation of One Harley Quinn). And now Harley has her own cartoon series on the DC Universe streaming service, Harley Quinn, which is hands-down the best show that channel has yet offered.

In Harley Quinn, our clown princess of crime (voiced by Kaley Cuoco) is on a caper with the JokerOne of Batman's first villains, and certainly his more famous (and most popular), the Joker is the mirror of the Bat, all the insanity and darkness unleashed that the hero keeps bottled up and controlled. (Alan Tudyk) when Batman (Diedrich Bader) arrives. Joker bails, leaving Harley to get caught, but he promises to rescue Harley, that she won't spend a night (more or less) in Arkham. And then she does... and another... for a whole year. Eventually it's Poison Ivy (Lake Bell), Harley's best friend, who breaks her out of prison, telling Harls that the Joker doesn't care for her. Soon (well, eventually) the Harlequin of Horror realizes that Joker really doesn't love her and, if she wants to find her own way through the world she has to do it herself, free of ol' Clown Face.

What follows, then, is a series of adventures are Harley tries to build herself up as the biggest and baddest villain in all of Gotham city. She gets herself a crew -- along with Poison Ivy there's Clayface (also Alan Tudyk), Doctor Psycho (Tony Hale), King Shark (Ron Funches), and Sy Borgman (Jason Alexander) -- and then works to get into the Hall of Justice. She wants to earn her place and be a real villain, all so she can shove it in the face of the Joker. So, okay, maybe she really isn't over him just yet.

While there are plenty of shows in the DC Multiverse that play up the seriousness of superheroes (many of which stream on DC Universe), Harley Quinn goes in the opposite direction into humor (cruising right past Legends of Tomorrow) as well as absurdism (being even more out there than Doom Patrol which, shit, also features Alan Tudyk). It is one of the funniest, weirdest, greatest superhero shows DC has produced, once again showing that while DC might not have a clue how to make a good movie they are more than willing to get experimental to create some of the ballsiest and best superhero shows around. 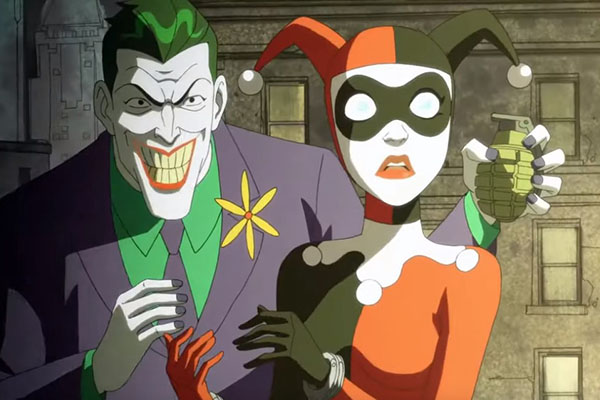 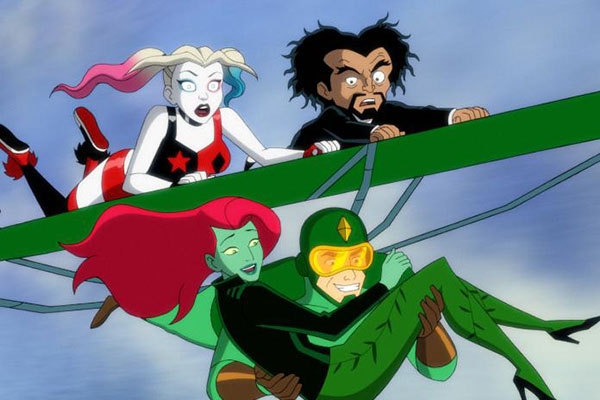 Part of what works in the favor of Harley Quinn is the fact that it will go in any direction it needs to for a laugh, sometimes with the characters making a snide comment, or a big joke, or a reaction shot, or just letting a strange situation play itself out. It benefits from having a fantastic cast of comedians to voice all the major characters on the show, never letting a role go past that can't be enhanced with a comedic voice. Every joke not only lands but is made even better by the voice cast, and the show is willing to let the humor shine, throwing anything out there to see what sticks (and everything does).

The best part is that everything feels organic. Harley and Ivy are shown to be really good friends who love and understand each other, so when Harley is beating goons down with her baseball bat (in over-the-top, bloody fashion), Icy standing in the background asking for her Thai food order for afterwards clicks perfectly. It's what these friends would do while one of them is on a rampage. And then they start bickering about texting the order and the hassle and it clicks just right. Each of the characters is given their own proper personalities -- King Shark isn't just a giant shark but also a tech-wizard while Clayface is an aspiring actor prone to over-dramatic line readings of everything. It's just brilliant.

The show is also mature in its handling of its material. Yes, that means the characters get to cuss and there's a lot of gore -- very few things are censored (although for those keeping score, DC Universe does feel the need to censor the c-word, as well as any genitals -- I am curious to see if that's censored on the inevitable home video release). But it's also mature in its understanding of human emotions. These are character who have been beaten on by life and find, within their collection of broken people, a kind of family. They learn, they grow, and the find ways to act like real, honest people.

This is a show that benefit from being a mature (as in hard-R) show because it also gets to have honest, adult (as in real and grown-up) characters. They get to cuss because that's what real people do. There's all kinds of gore because when you have a woman break an arm with a baseball bat, or a shark bite a person in half, there would naturally be gore. The realism of the violence and the language actually has a grounding effect, in a way, on the absolutely absurd proceedings. It's an interesting way to build the show, but I really appreciated it. 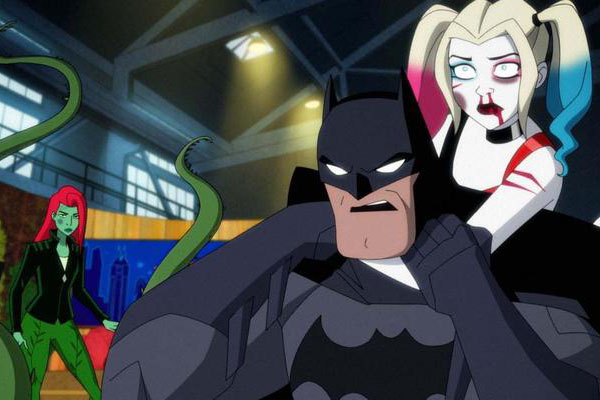 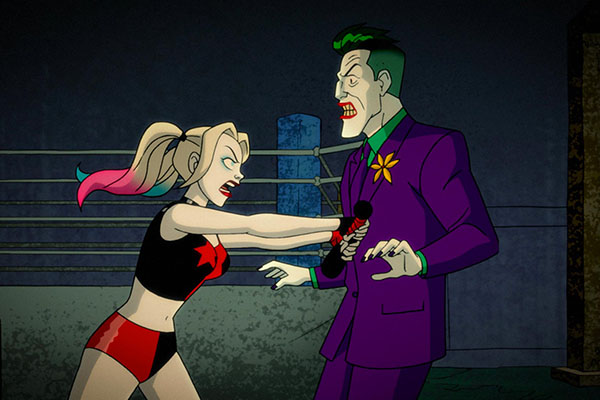 And it is truly absurd. The show loves to poke fun at everything related to Batman from his strange villains (Calendar Man is an early highlight, and the continued, sad antics of Kite Man are also great) to his surreal city. Only in Batman comics could a woman like Harley Quinn not only escape prison but then get a nuclear bomb, hold the city hostage, and then get to design her own completely insane highway (complete with traps, weapon upgrades, and loop-de-loops). It's dumb and silly, yes, but it knows that and uses it as an advantage.

In the end, though, the core of the show comes back to Harley Quinn and Poison Ivy, time and again. They're the duo that starts the whole show and, wisely, its the bond between the two that anchors it as well. Their friendship, with its ups and downs, is the emotional engine that drives the show, and when they are able to find deeper levels of their friendship, free of anyone else or their own expectations, then you realize how good the show really is. It's able to build one of the best female friendships anywhere on TV, and it does it in a silly show about a dame that used to be Joker's girlfriend.

DC Universe knows how good this show is as it's already been renewed for a second season (that will debut two months from now). I couldn't be happier -- this is one of the few shows that is true appointment viewing for me, and if the second season is as good as the show (or, dare we hope, better?) then I will continue to show up, letting DC have ever dollar of my subscription money in the process. If any show makes the DC Universe a must-watch experience it's Harley Quinn.