As is the refrain: before Wonder Woman, the DC Extended UniverseStarted as DC Comics' answer to the MCU, the early films in the franchise stumbled out of the gates, often mired in grim-dark storytelling and the rushed need to get this franchise started. Eventually, though, the films began to even out, becoming better as they went along. Still, this franchise has a long way to go before it's true completion for Marvel's universe. was in dire straights. Man of Steel was uneven, Batman v Superman: Dawn of Justice was a horrible, twitching chimera of three different movies, and Suicide Squad was straight-up an abomination. If the DCEU was going to pull out of its tailspin, something had to shift. 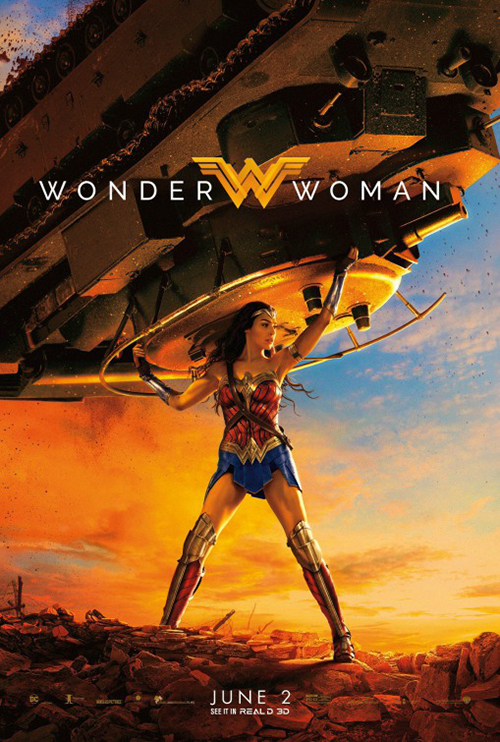 And then along came Wonder Woman, a film that showed someone in the DC film department had a clue about what people really wanted from their superhero movies. Where the other films were dark and gritty, Wondie had a lightness (for much of its run time), an energy to it that the other films had so far been lacking. The film is nowhere near perfect (as we'll get to), but its strengths far outweighed its flaws.

Although Wonder Woman had already been introduced in Batman v Superman (stealing the show for her spare scenes), this film goes back to her beginnings, giving us an origin story for the character. While most people bemoan origin stories, complaining about how Hollywood is just recycling a plot line we've seen before, it does work in Wonder Woman's case since this isn't a story that has appeared on the big screen before. That's a surprising fact, when you think about it, because Wondie has been around just about as long as Batman and Superman. Her comic started only a little while after their's, and, like Bats and Supes, Wonder Woman is the only other hero to survive the post WWII comic book crash -- all three of their titles have been running consistently since their first launch.

Why is it that Wonder Woman lacked an adaptation (and origin) on the big screen before now? It's not as if the character hadn't been a proven commodity before now. She had a long-running television show starring Linda Carter which, yes, it was cheesy, but no more so than the Adam West/Burt Ward Batman from a decade earlier. She could headline a project, and people would come back to watch it, so what happened? Superman had a run of movies in the 1970s, and Batman has been a constant presence at the multiplex ever since Tim Burton's flicks.

People will have their own theories about this, but probably the correct answer is that Hollywood is risk-averse and female-led superhero stories were simply considered "too risky". Hell, any female-driven film that isn't a romantic comedy is considered a big risk, with Hollywood instead relying on male-dominated action flicks to earn big bank. While those movies do well (which is why Hollywood keeps making them), an audience looking for superhero flicks aimed at their own demographic remained under-served. That's the argument to be made for why Black Panther was such a hit (as was Blade before it) since it served African American audiences by giving them a superhero to root for (and it certainly didn't help the movie's bottom line that it tied in to the Marvel Cinematic UniverseWhen it first began in 2008 with a little film called Iron Man no one suspected the empire that would follow. Superhero movies in the past, especially those not featuring either Batman or Superman, were usually terrible. And yet, Iron Man would lead to a long series of successful films, launching the most successful cinema brand in history: the Marvel Cinematic Universe.). 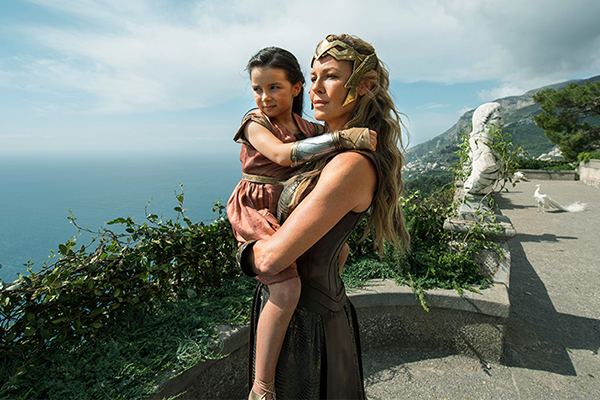 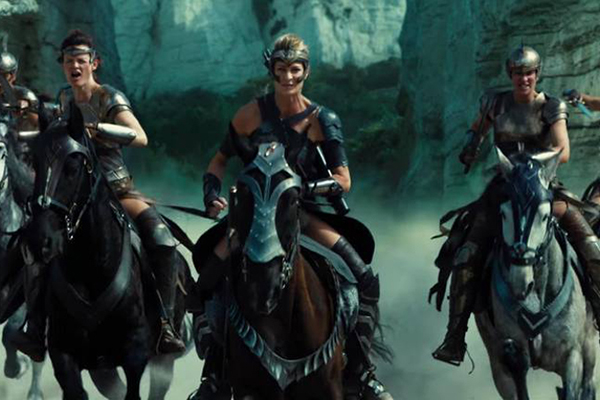 However long it took, at least DC finally got the message, releasing a Wonder Woman flick in 2016. The film benefits by being (at that point) the best movie released into the DCEU (your opinions on Aquaman would color whether Wonder Woman remains the best film in the series). Of course, the downside is that it is still a DCEU film, so it's constantly fighting against the pull of that universe (especially at the end). Still, this is probably the best film Wondie could have hoped for, especially considering the circumstances.

In the movie, we're introduced to Diana (Gal Gadot), princess of Themyscira, island of the Amazons. Centuries before, this land was hidden from the world by the gods, made invisible so that no one could find it. The women on the island (and yes, they're all women), are ageless warrioresses, fighters who practice day and night for an era when Ares, god of war, returns and seeks to destroy the world. Diana is special above all the other Amazons, a fierce warrior with strength and power greater than her peers. She's a champion, molded from clay and given life by Zeus so that her mother, Hippolyta, would have a daughter of her own. The queen protects her daughter, keeping her safe, hoping that Ares never comes so that her daughter is lured away by the need to protect the world.

Sadly, this idyllic peace is broken when a WWI plane crashes into the waters off the island. Diana, being the first to see the crash, immediately dies into the water to save the man trapped in the machine. That man, Steve Trevor (Chris Pine) is an American spy working for British intelligence. He was shot down by Germans, and soon enough a boatload of said Germans come to the shores. The Amazons rally, attacking the interlopers, with Steve fighting by their side. The Germans are chased off, but Steve is not trusted... not by anyone other than Diana. She agrees to aid Steve, to get him back to England so he can deliver his intelligence, but in return he has to take Diana to the war so she can find Ares (who she swears must be behind this "War to End All Wars") and kill him to save the world. And, in the process, she'll become a hero of the people.

Wonder Woman neatly breaks up into three acts, and the first two acts are certainly the strongest. As a salve to the constant dark and gritty filming of the DCEU, the first act of Wondie is set on a bright, island setting, about as far removed from the DCEU house style as you can get. It's in this first act that everything we need to know about Diana (no matter how weird or strange it may be) is taught to us. She's tough, she's strong, she's powerful, and she's made of clay. These facts are all presented as if there's nothing weird about them, with no one trying to say, "yes, well, we know how strange this sounds, but hear us out..." The (Greek) Gods exist, people can have mystical powers, and Diana will be the savior of the world. There's no room for doubt here, so we never do. 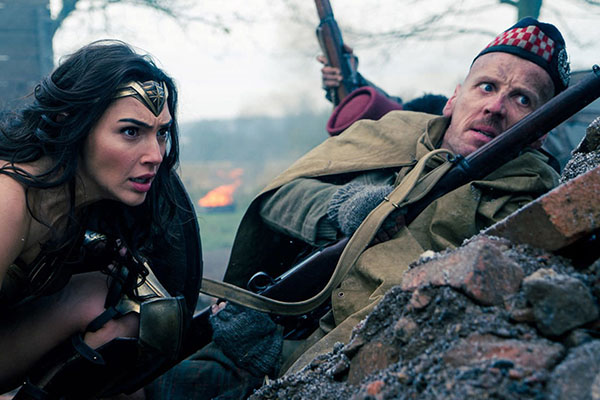 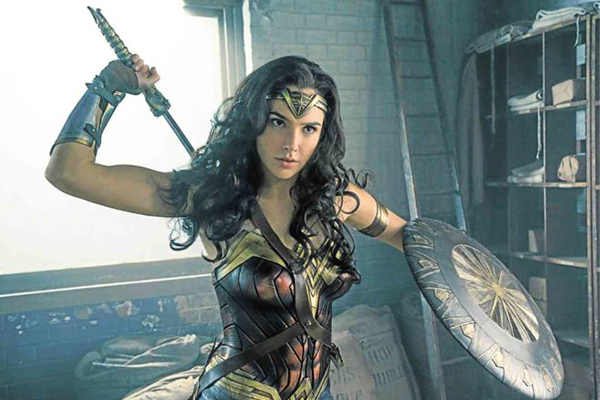 That said, it helps Wonder Woman that not only was the central character introduced in a previous film (so we an already see what she can do) but that we also already had Man of Steel so we're already prepared for superhuman feats. Since this takes place in the same universe, there's never reason to say, "yeah, but how can super heroes exist." We're past that.

Once Diana teams up with Steve and they head to London, the film looses it's bright and shiny luster, but not its humor. The second act may be grimier (to befit London at the turn of the century, followed by an exploration of the British/German front) but it's not a needlessly dark slog. Sure, there's drama (the trials of war) but the characters bond, grow to have genuine affection for each other, and crack jokes. It's still very clearly a different kind of movie from, say, Batman v Superman.

Plus, let's be clear, the second act finale is an absolute show-stopper. This is Wonder Woman's big moment (the famous "No Man's Land" sequence), where Diana begins to fulfill her destiny. She puts on the costume, raises her shield and sword, and heads into a deadly gap between the British and German trenches, a strip of land that hasn't moved in months because "no man" can safely cross it to get to the other side. Diana can, and does, though, fighting off the Germans, saving a fortified town, and freeing untold numbers of villagers in the process. She rises to become the heroine we all knew she could be, and in the process the movie delivers the kind of swelling action and glorious elation we expect from superhero movies.

If Wonder Woman could have found a way to tie the movie up there and end on that high note, it would have been perfect. Sadly, the entire last act is where the movie falls apart -- it never becomes bad, it just falls back into the same rut other DCEU movies have already tread, and loses all the gusto of the first two acts. Here, Diana and her team of soldiers try to track down a German general (who Diana swears is Ares in disguise) so they can stop his evil operation, kill the general, and end the war. Ignoring the fact that this isn't really how war works (no one general in in charge of an entire military, and even after an armistice is called, the war machine takes a while to wind down), the big issue is that this whole act is so drab and tedious. 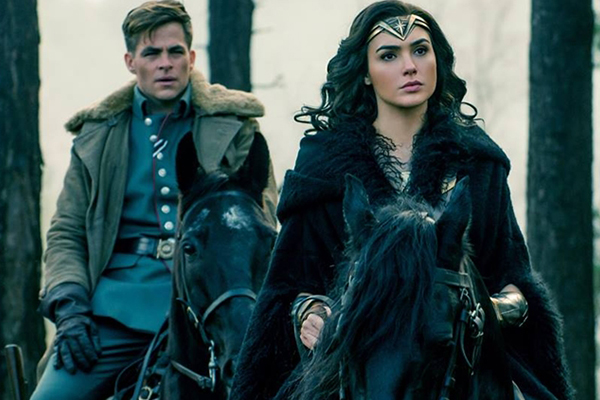 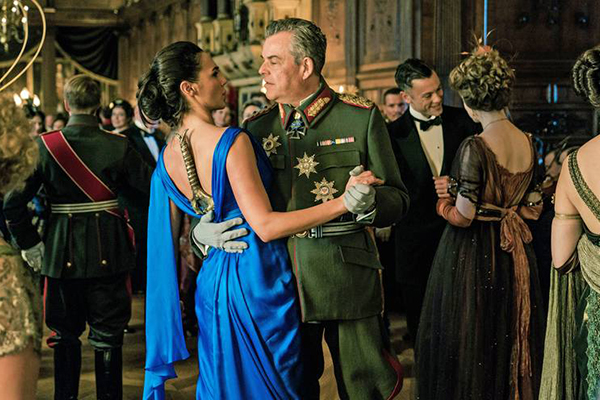 The worst part is that the final battle between Diana and Ares (because of course she was bound to fight Ares) is a tedious, CGI-laden affair. The fight is airless, a mush of dark colors and incomprehensible action. Nothing that happens in the battle, right up until Diana kills Ares, really matters. It's just sound and fury without any weight to it, as if Zack Snyder (director Man of Steel and Batman v Superman) stepped behind the camera to finish up the movie. "Don't worry," I imagine him saying. "I've got this." Whether he had an active hand in the filming the final battle or not, it certainly feels like one of the terrible fight sequences he'd stage, cribbing directly from the last act of Batman v Superman to the detriment of the movie.

It really sucks because Wonder Woman is such a good movie right up until it suddenly stops being fun. I'll watch the first two acts over and over again, but at a certain point after "No Man's Land" my brain just tunes out. The movie can be playing in front of me, I can be actively watching it, but it's hard for me to remember (or care about) what I just watched.

With the DCEU slowly moving away from the Zack Snyder aesthetic (Aquaman had it's flaws, but it very rarely was a dark and gritty slog) I have hopes that the planned sequel, Wonder Woman 1984 can course correct from the failings of this movie's last act. Wonder Woman has a good movie, now she just deserves a great one.