It's All About the Toys, Diana

When it comes to Wonder WomanLong considered the third pillar of the DC Comics "Trinity", Wonder Woman was one of the first female superheroes ever created. Running for as long as Batman or Superman (and without breaks despite a comic downturn in the 60s that killed superhero comics for about a decade), Wondie has the honor to be one of the longest serving, and most prolific, superheroes ever. adaptations there's the good -- Wonder Woman 2017 -- and then there's the very, very bad. And, as far as most fans are concerned, there's nothing worse than the failed 2011 pilot for a Wonder Woman TV show. Produced by David E. Kelley (of Ally McBeal fame, among many other shows), it was assumed this show would be a sure thing. It wasn't. Far from it. Instead, after spending a ton of money on the pilot, NBC decided not to pursue the series. That was probably for the best. 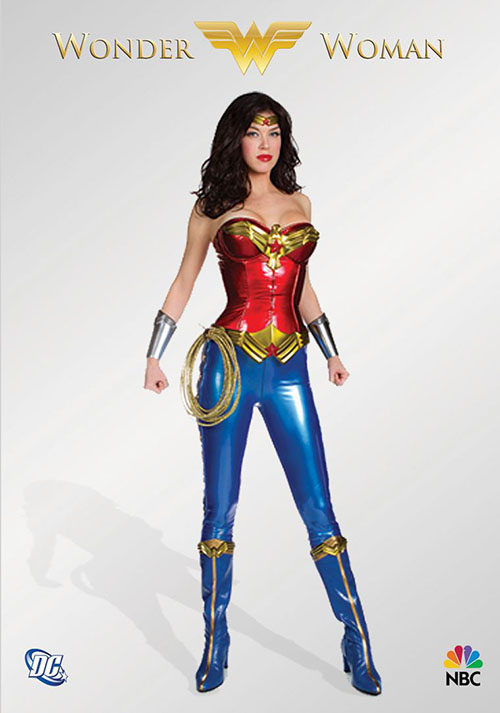 While this show has a certain aura hanging around it, some might call it a stink, I have to say that I didn't think the show was that bad. Yes, the pilot is rough, due in no small part to it being a pilot (with unfinished graphics, no less, on the copy I was able to see), and it's not great. There was potential here, though, that I think could have been tapped had the episode gotten a rewrite, a bit of re-filming, and some tweaks to make the show actually work. Given a series order I think many of the other bumps could have been worked out. Instead, though, we have to watch just this one episode on its own, as is, and, yes... it's not that good.

In the pilot our heroine -- Wonder Woman, Diana Themyscira, Diana Prince -- is played by Adrianne Palicki. As Wonder Woman she goes out to right the wrong and fight for truth and justice and whatever. She works "along side" (but never with, wink nudge) the LAPD and the FBI, solving cases and doling out her brand of vigilante justice. Her "public persona" is known, though, as the public knows Wonder Woman to also be Diana Themyscira, CEO of Themyscira Industries, a powerful conglomerate that backs up her crime fighting with technology, most of which is, apparently, funded by sales of the Wonder Woman dolls. Toys make the world work, apparently.

Her first (and for this failed series, only) case was searching for evidence against Veronica Cale (Elizabeth Hurley), an evil CEO who runs a supplements conglomerate. Apparently one of the supplements she's been testing in her labs has some awful side effects which, in part, lead to the deaths of six kids from "the ghetto". To save kids like them, and anyone else caught up in Cale's web, Wonder Woman has to hit the streets, and beat up on thugs, all so she can get the job done. Joined on the case by LAPD detective Ed Indelicato (Pedro Pascal, in his first appearance in a Wonder Woman production), the two will have to track down the illegal lab and find the evidence they need to send Cale away for a long, long time.

So the first thing we need to address when discussing this series is just how poorly it actually understand Wonder Woman. David E. Kelley understood a specific type of female character -- the Ally McBeal -- and this series does its best to turn Wonder Woman into Ally. A large, and awkward, amount of time is spent on Wondie's "personal life", with much of it being very awkward and hard to watch. Every time a character, like Tracie Thoms's Etta Candy or Cary Elwes's Henry Detmer, brings up Diana's past life, her ex-lover (Steve Trevor, played horribly by Justin Bruening), and everything else about her life, the episode stops dead. The dialogue is bad and though the actors try their best, this part of this show just sucks. And that doesn't even get into the fact that the show casts Diana as some sad and lonely cat lady, as if to say, "she doesn't have a man so she has to sit at home, sad and alone." 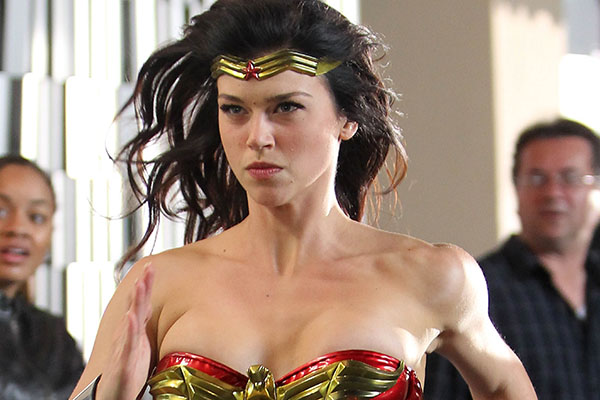 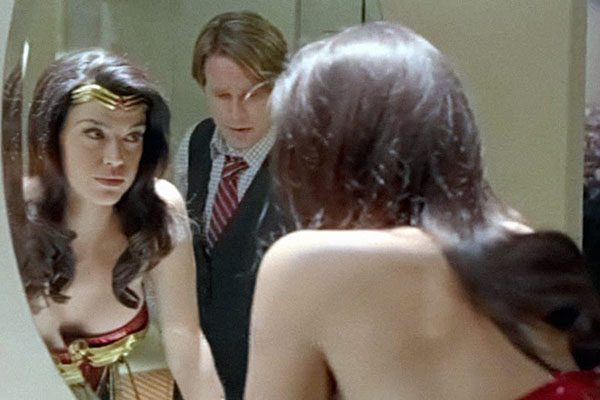 Honestly, the show has really bad politics all around. This feels very much like a show written by a white dude (which it is) with him trying to be "empowering" to women (which it isn't) while having his white female character take on racial justice (adding in a nasty bit of "white savior" in the process). A particularly cringe-enduing moment comes when talk of her new "action figure" comes up and the doll is made up, well, like a bimbo. All well and good, but then you have to sit through Wonder Woman saying "tits" over and over again and you have to wonder who this scene was really playing to (her rage seeing particularly poorly aimed when her actual costume only emphasizes her assets).

It really does feel like David E. Kelly came in to write a specific show, damn whatever came before. he made Ally McBeal so he "knew" how to write a "feminist" show, and just couldn't be persuaded otherwise (if anyone even tried to stop him). Like shades of Joss Whedon, though, clearly his "empowerment" was only superficial and, when given the keys to this particular kingdom he screwed the pooch, hard. It's hard to think of a worse way to write this character and her setting than the way this 2011 pilot does it. Over and over this episode fails to understand the best way to present its lead character.

And yet the episode was vastly more watchable than I expected. This is, in large part, due to the cast. Although she didn't get to take the role past this pilot, Palicki is actually really great as Wonder Woman. Not only does she have the right look -- she's a taller woman who looks imposing when she wants to, a key point for a character that is supposed to be an Amazon, taller than all the other heroes around her -- but she managed to find genuine depth to her character even when the show made he spout off really awful lines. She, along with Tracie Thomas's Etta Candy (who truly has one of the worst character names in comics) and Cary Elwes's Henry Detmer, all manage to make this bad script really interesting... at least when they don't have to talk about "personal" details. Those scenes just don't work.

Also, frankly, the show really doesn't know what to do with the rest of its main cast. Hurley doesn't have much to do except vamp, which she does well, but she doesn't have the bravado to actually pull off "evil CEO" and just seems lost in those scenes. Pascal is a great actor and he'd probably have been solid as the Detective if the episode didn't suck. His performance here is all over the place but I think that's, in large part, because he recognized how bad his scenes were and just went with the campiness of it all. The worst, though, is Bruening who looks like he was hired because he's pretty (as it certainly wasn't for his nonexistent acting talent). 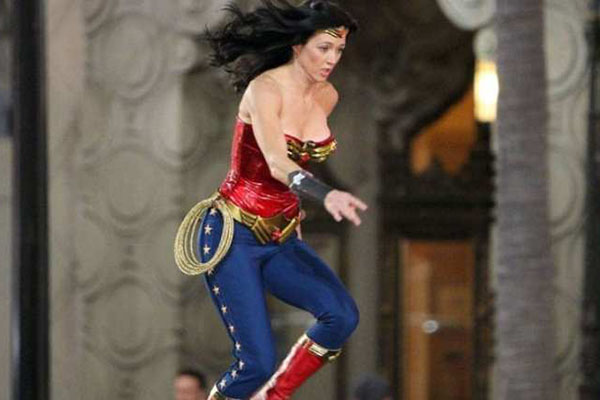 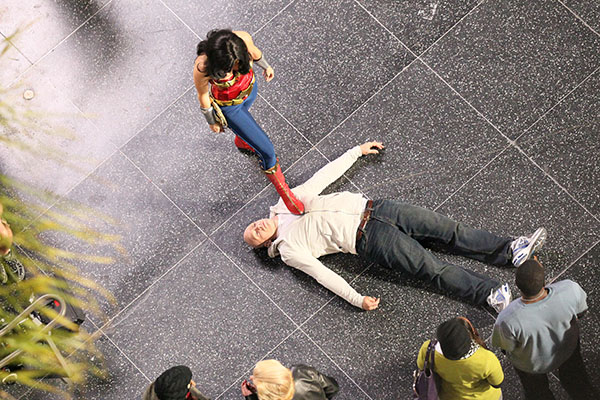 There are other issues with the episode as well. Diana is too violent, she beats thugs up to get them to spill dirt when she should be using her Lasso of Truth to compel information out of them (and she does have the lasso on her so... why?). She also kills guys, even here in this first episode, which feels like a massive escalation for just a pilot. Hell, that, coupled with the fact that she works along side cops, puts a very bad air on her vigilant justices. And that doesn't even get into the dated qualities of the show, like bad cameo appearances from Nancy Grace and Dr. Phil... it's just hard to watch at times.

I will say that one fun bit was seeing a pilot that clearly hadn't been cleaned up for air. There are spots where clearly the effects guys were supposed to go through but with NBC dropping the show there just wasn't a need to do it. Fight scenes have obvious wire-work showing, which actually made it interesting to see how those kinds of sequences played out, and there are shots where titles are used to say, "insert this effect here" instead of actually having that effect. It was hilarious to watch and did actually perk up some scenes.

Frankly, I can see why people say this episode is bad. It's cringe-y, yes, and it needed a lot of work. I think if the core cast had been maintained, if a new script had been worked up, and if David E. Kelly had been fired off the project, this show just might have been able to be saved. Plenty of shows have been given a second pilot to work out kinks and the bones of just that kind of resurrection were here. If this episode had gone to air it would have led to the show getting canceled right quick, that's for sure. But a new pilot, made with what works... I think that could have been something. Sadly, that show is one we'll never get to see.