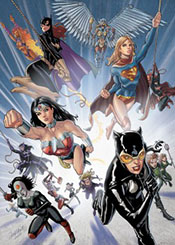 I'm a DC Comics fan. Have been since I was just a wee little fan boy in the 80s. For some reason the DC heroes just struck a chord with me, and I was attached to Batman, Superman, and all the members of the Justice League (although, even then, when i was so young it all boiled down to "superheroes have powers and that's so cool!" Aquaman was still lame). In the 90s, when Marvel had their surge of cartoons (like X-Men and Spiderman), I thought they were cool, but they didn't have anything on DC. Batman: The Animated Series was appointment watching in ways Marvel just could touch.

It's part of what leaves me mystified at the current slate of comic book movies. I really dig the Marvel Cinematic Universe because it does so much right... but I don't care about the characters the same way I would if it was a DC comic book movie. Yet DC just can't seem to figure out what to do with its properties if they aren't on TV. Green Lantern the cartoon series? Pretty damn good. Green Lantern the movie? Cinematic train wreck.

And I love Green Lantern. I'm a giant Green Lantern dork, design my own symbols (for both green and blue corps) and really do wish that the Green Lanterns exist just because I want to pimp swagger around town with a bad ass ring on my finger (knowing full well non of the corps would have me). But my god was that movie terrible!

I'm willing to accept a lot from DC if they just give me a little to work with. The Christopher Nolan Batman movies are flawed, but I still watch them repeatedly. Hell, Man of Steel had some series plot issues, but I still think it's one of better superhero flicks around. Just give me something to work with, is all I'm saying.

That goes for their comics, too. Part of my issue with DC comics in the past was that many of their top-tier heroes feel so... set. Batman will be Batman and will always be Batman. Even when he had his back broken, no one else could out bats the Batman (Azrael tried, and that was awful). Even when they put Dick Greyson in the role of "Batman", he wasn't really -- he was just Nightwing playing at being the bats until he could take the costume off and be someone else.

When I'm saying is that most of the heroes were paragons. It's hard to identify with a god. Part of what I like about Green Lantern is that so many of the heroes in that series have flaws -- you will never find a more "warts and all" hero than Guy Gardner. And many of the second-tier books have characters with real depth and emotion, just living lives. Superman may be Superman, the god living among men, but Batgirl is one of three women working to keep Gotham safe among dealing with college, finances, and, oh yeah, one of them having a broken back.

The New 52 did a lot to shake things up, not always for the good:

And yet, despite my hating a lot of what they did the heroes I liked with the New 52 Reboot, there are a bunch of heroes I didn't care much for that now are totally interesting to me. Huntress? Kinda meh before, but the new Huntress (who's actually the female Robin and daughter of batman from Earth 2)? Totally kicks ass and has a reservoir of emotional depth.

And Powergirl is awesome too. The old Powergirl was either cheesecake or ditzy, but the new one (who's really the Supergirl from Earth 2) manages to take those traits and actually work them into a party-girl facade that belies the anger and emotion at her core. So yeah, good writing there.

I'm even digging into Supergirl, who isn't character I'd every really bothered with before. I read her relaunch adventure from back in New Earth Superman/Batman, but she never felt like the agent of her own destiny there -- Supes and Bats had to save her time and again. The new Supergirl, though, goes out of her way to ignore her kryptonian cousin so she can find her own path. Sure, her costume is dumb (so very, very dumb), but the comic is totally worth reading.

So yeah... I don't know what's going on with you, DC. I love what you do and you enrage me at the same time. I want to embrace your movies, but they so often suck. And your comics are curiously hit or miss, even from one month to the next (how many writing teams have been switched out, over and over again, since the New 52?). You make new characters interesting, but you don't know what to do with your big properties.

Just give me something to work with and I'm your fan, guys. Work with me.