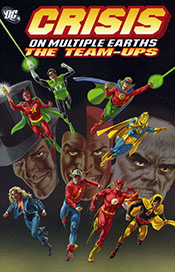 Seriously, though, if you look at DC history, they really can't go five minutes without a Crisis. We had:

Meanwhile, DC had a ton of other crossover events, some of which actually rebooted parts of continuity, such as Blackest Night, which eliminated the revolving door of death (well, it did for like three years or so), and Flashpoint, which completely rebooted DC continuity again (but it came after Final Crisis, so they didn't have to give it a "Crisis" name because that was the final one, obviously.

And yet somehow, after all of this, I'm still a fan of DC. I must love punishment.