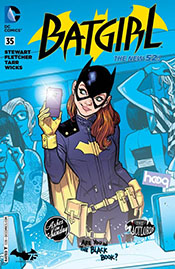 Okay, so after my last little rant it was pointed out to me that Batgirl is getting a whole new look. I sorta saw that before, but dismissed it because it made he look twelve and I just couldn't care about the Bat-family anymore (serious, for all the New 52 actually gets right, it treats a lot of legacy characters like ass). Then I went and looked at the costume again: 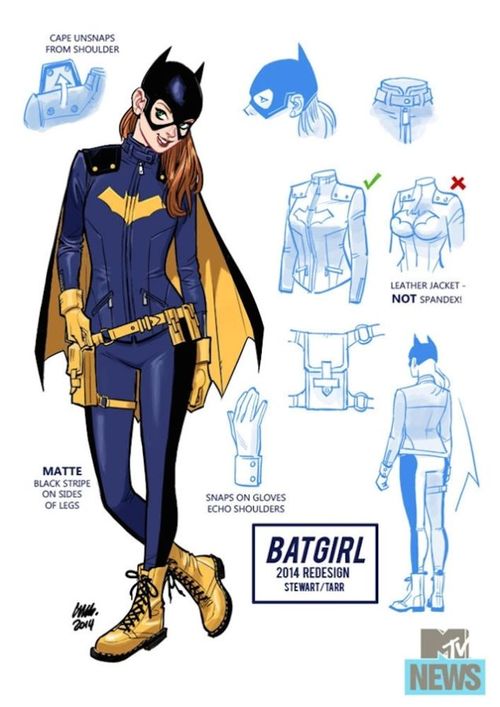 While I am all for artists reinventing costumes (it happens all the time when new characters take over old identities, like Stephanie Brown becoming Batgirl III), this new look just bothers me.

For one, as mentioned before, it takes an adult character and makes her look like a preteen. Now, I'm not saying heroines have to have their powertits sticking out (old Powergirl being the WORST offender of this), but this doesn't just look demure. It looks young. Maybe it's the caplet, or how the leather jacket makes her looks like she has almost no chest at all. Instead of seemingly like she's reinventing herself to be less of a bombshell, this just looks like what a pedophile would get off to.

Part of that is probably also the spandex pants. Batgirl decided she needed a leather jacket instead of a spandex top... and then wore spandex anyway. Even the notes on the drawing saw "spandex is bad" and yet the pants are the same tight, sheer fabric we see every time. The hell?

And the boots! Dear gods those boots are awful. They don't help the "youngness" of the look, making it look like Babs borrowed an older cousin's combat boots. They're ill fitting and overly large.

The thing that annoys me the most though is something I'm sure comes from over-thinking it too far: that is not an all-weather outfit. I like that the creators tried to make a costume that might, maybe, be actually wearable in the real world (awful spandex pants not withstanding). But it's just not the kind of costume you'd want to wear in the middle of summer. Sure, I doubt spandex breathes any better, either, nor does the colorful armor all the DC heroes have taken to wearing now, but for some reason that leather jacket just seems impractical if this is going to be the costume she wears all year long. it's bulky, heavy, won't breathe, and limits her flexibility.

Seriously, the only character that seemed to think about weather was Superboy (from the 90s and 00s). T-shirt and jeans. Multi-purpose, comfortable, breathes reasonably well, and it doesn't get too hot. And Superboy was a Kryptonian, so it's not as if the heat (or cold) really bothered him, so that was kind of a waste.

I will credit the Batgirl creators, though: the snap-off cap is practical and efficient. I like that.