Time for a Spot of the Ultra-Violence

Originally I wasn't going to re-review this film. In going through the DC Animated Movie UniverseWhile DC Comics was amping up production on this big "MCU-killer", the DC Extended Universe they were also quietly putting together another shared movie continuity, the DC Animated Movie Universe. This series was more closely related to the comics, directly adapting a number of famous storylines to, arguably, better effect than the live-action movies could. I knew there were a couple of movies, like today's entry Suicide Squad: Hell To Pay, that I have reviewed recently enough that I might not have had to go back to them again. But in looking over my previous review for this film it felt like I spent a lot of time talking about works related to this movie without giving them film it's own fair shake. So even though we've already covered the next film in the DCAMU out of order, The Death of Superman, let's go back and take a look at Suicide Squad: Hell to Pay. 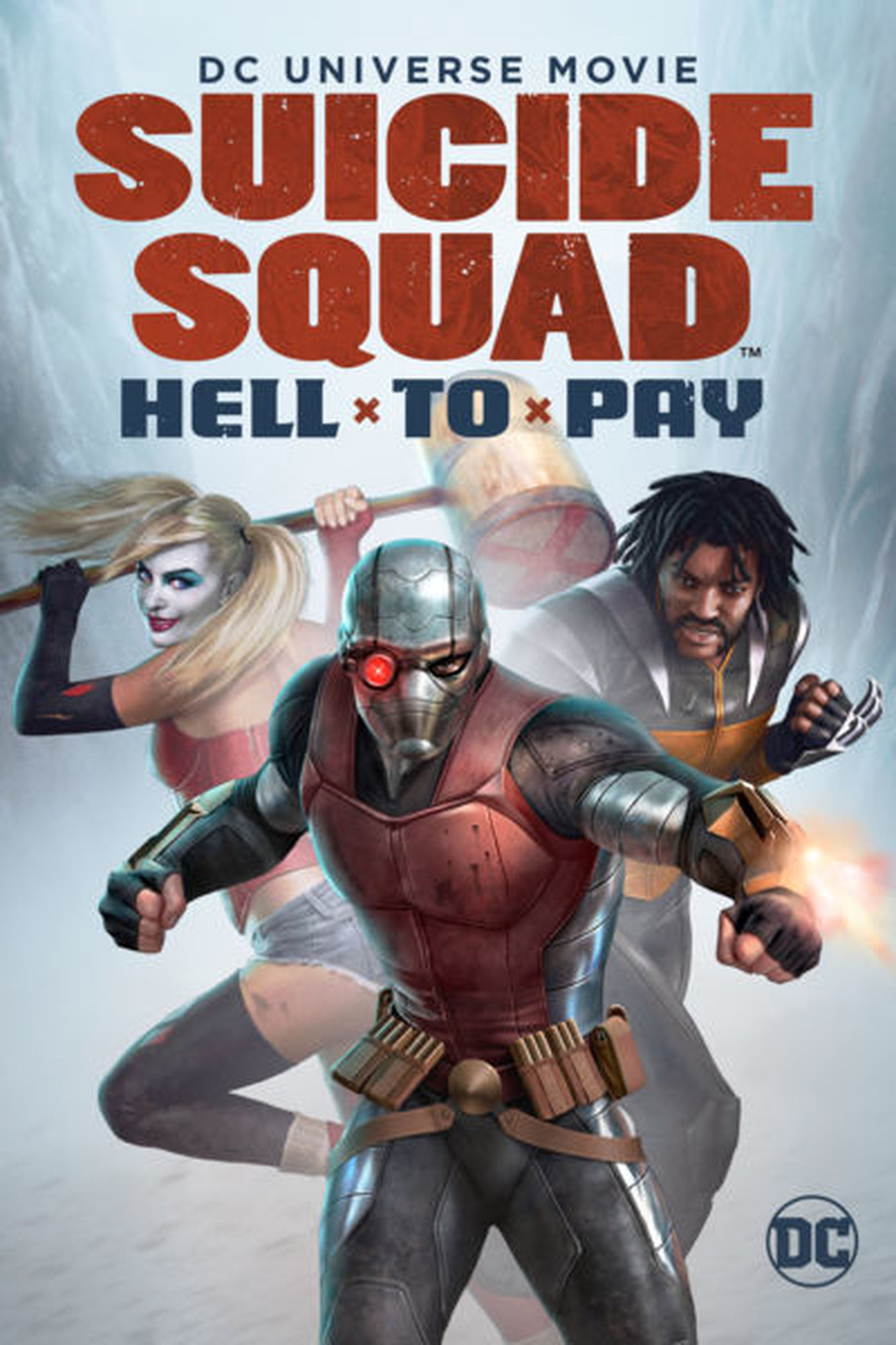 Honestly, though, this film could have been reviewed at practically any point in the DCAMU once we got past the basic introductions of the heroes back in Justice League: War and Justice League: Throne of Atlantis as it focuses on a largely stand-alone team with no major connections to any of the previous events seen (barring one point of order we'll get to in a bit). You could watch this at any point during a sweep through the film series and, due to the fact that it doesn't mention many major events during the series, and doesn't directly tie in (so far) to anything that occurs after, the film can be viewed on its own any way you like. That's really one of its greatest strengths: for a film series that has quickly started building on itself, having characters crossing over between films, a stand-along adventure that sells a self-contained story is pretty refreshing.

In Hell to Pay we're introduced to "Taskforce X" (aka, the Suicide Squad), a group of super-villains who all, one way or another, fell under the control of Amanda Waller (voiced by Vanessa Williams), the head of A.R.G.U.S. This band of villains do the bidding of Waller all for the promise of having years knocked off their prison sentences -- play nice and they'll eventually get to go home as supposedly reformed members of society. And all they have to do to get there is go out on impossible missions, risking life and limb, following whatever task Waller lays out for them. And if they go off the reservation, the tiny bombs planted in their necks will explode, killing them. What other choice do they have, then?

Out in the field, the squad is led by Deadshot (voiced by Christian Slater), the most efficient killing machine with a gun (or anything else, really) ever. He's joined on Waller's latest mission by: Captain Boomerang (voiced by Liam McIntyre); Killer Frost (voiced by Kristin Bauer van Straten); and Harley Quinn (voiced by Tara Strong); as well as C-Listers Bronze Tiger (voiced by Billy Brown), the greatest martial artists ever, and Copperhead (voiced by Gideon Emery), a meta and contortionist who also body-modded himself to be more snake-like. Their mission is to grab a magical card that grants its owner a one-way ticket to Heaven upon their death. The only problem is that a whole horde of people, from Professor Zoom (voiced by C. Thomas Howell) to Vandal Savage (voiced by Jim Pirri) want to card, too. There will be a lot of carnage as the various sides fight for this MacGuffin.

While we've focused a lot on the heroes in the DCAMU, with a ton of stories dedicated to the Justice League and BatmanOne of the longest running, consistently in-print superheroes ever (matched only by Superman and Wonder Woman), Batman has been a force in entertainment for nearly as long as there's been an entertainment industry. It only makes sense, then that he is also the most regularly adapted, and consistently successful, superhero to grace the Silver Screen., their rogues haven't had the same amount of time in the spotlight. That's one thing Suicide Squad: Hell to Pay helps to correct. But giving more focus to a bunch of rogues, some working on the team and some working at cross-purposes, this movie helps to make the seedy underworld of the DCAMU feel vastly more fleshed out. All of these heroes have colorful villains to fight, but even better we get to view these rogues as real people. 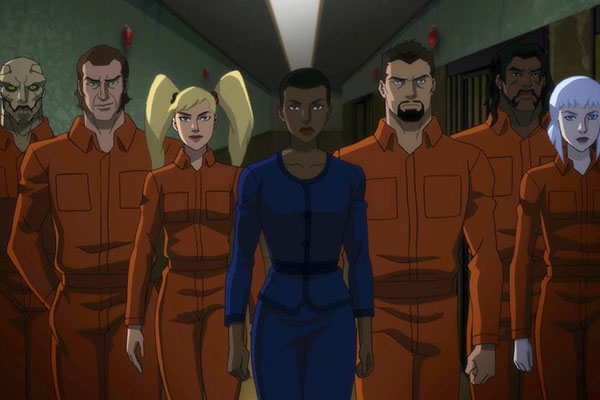 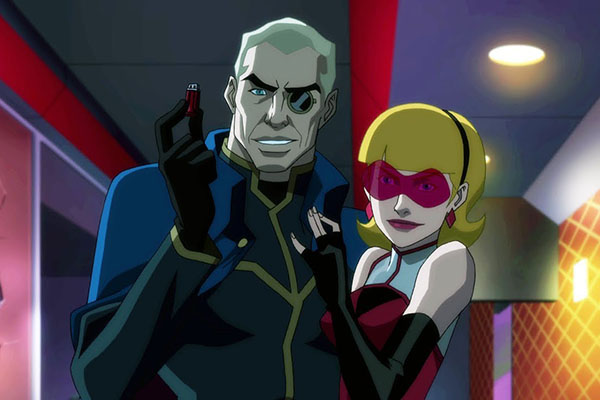 Well, some of them, anyway. Most of the focus of the movie is on a select few of the squad-mates, specifically Deadshot, Bronze Tiger, and Killer Frost. Despite the film having a few recurring characters from the other Suicide Squad movie (the DC Extended UniverseStarted as DC Comics' answer to the MCU, the early films in the franchise stumbled out of the gates, often mired in grim-dark storytelling and the rushed need to get this franchise started. Eventually, though, the films began to even out, becoming better as they went along. Still, this franchise has a long way to go before it's true completion for Marvel's universe. Suicide Squad), Harley Quinn and Captain Boomerang aren't given anywhere near the same level of character development as I would have liked. Both essentially fill in as comedy relief, cracking a joke before disappearing into the background so Deadshot or Bronze Tiger can argue.

In the case of Deadshot I can understand why they put more focus on him: he has an interesting back story that gives the character a surprising bit of depth. Although he was a contract killer (and, really, still is, just under the control of Waller now) he was also a family man looking to take care of his daughter. After getting caught and sent to prison Deadshot lost contact with his daughter (who, understandably is mad and wants nothing to do with the villain). Much of his story is spent on him trying to find a way to free of Waller and get back to his kid. Note that there's nothing here about him reforming and changing his ways -- even if he got free he'd probably continue to work as a contract killer, just legally for some government agency. He's still Deadshot so I appreciate that the film doesn't try to say he's suddenly gone soft and learned the error of his ways.

Bronze Tiger, a character I hadn't heard about before this movie, is also given a fair bit of development. He was a warrior who went on a rampage after his fiance was killed. He only killed guilty men (avoiding innocents by choice) but that still didn't keep him out of the control of Waller (since no one likes a vigilante that kills people). Now he works for her but he still maintains his moral code (which is why Deadshot leads the team instead). The struggle between these two guys is what drives the heart of the team as all the weird crap goes on around them. And the film does, indeed, get pretty weird.

As you might recall when we started doing this dive into the DCAMU, we began with a film that didn't actually connect to any of the movies to come after: Justice League: The Flashpoint Paradox. When that film was first released it acted as a stand-alone title. But then, with Hell to Pay, Flashpoint was tied into the whole continuity. It seems that Professor Zoom, who died in the alternate reality created in Flashpoint, stored up all the Speed Force energy he could to prolong his life as long as possible. He's still dying, ever so slowly, and that's why he wants the card -- if he doesn't have it, he's likely going to Hell. 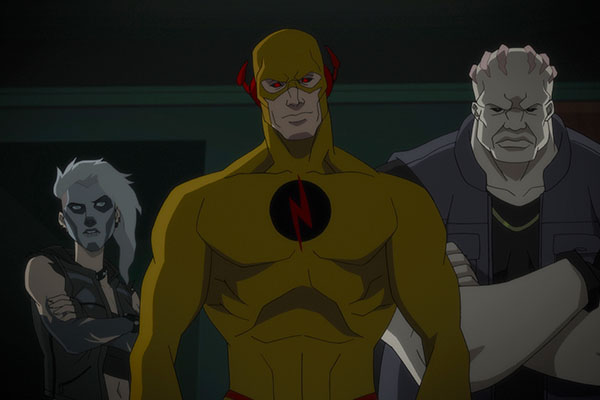 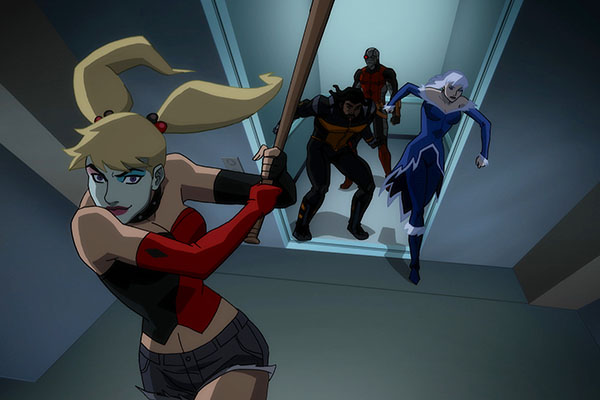 I liked Zoom's story here, as weird and comic-bookish as it was. At the same time, though, it adds another layer of complexity to the film. Not only do we have the introduction of the Suicide Squad here, and versions of all its members we haven't seen in this continuity before, and not only do we have the magical "Get Out of Heel Free" card, which requires it's own explanation (which ties into Doctor Fate who requires his own explanation), and not only do we have Vandal Savage, introduced her with his own back story, but we also have Zoom as well, who needs his own explanation as well. It's like the producers of the film didn't trust we could get behind a battle between a slowly-dying Zoom and the Squad so they threw everything else at the wall as well. It's a total mess at times, with characters frequently pausing the action so they can explain their next important plot detail.

And yet, despite the messy nature of the film, I found myself enjoying the movie. It's setup like a grindhouse film, with all the gore and violence you'd expect from there. Cheesy exposition and over-explaining are part and parcel with those kinds of film. Honestly, if it weren't for the animated nature of the movie, I'd half expect a boom mic to float into the shot once in a while just to sell the nature of the film considering the vibe it was going for. It's weird and over-the-top and is constantly fighting itself to figure out the story it wants to tell, but it's also enjoyable for all those dumb reasons. It's a flawed movie, but in a fun way.

I think that might just be inherent to the Suicide Squad, honestly. The last film we had about this crew, the DCEU effort, was messy in its own ways, with the same amount of over-explaining these characters who all had to be introduced because we'd never seen them before. It didn't work over there because the film didn't really understand anything about the characters it was dealing with. Here, at least, the film knows who these people are: they're bad guys sent in, on their own, to do a mission and if they die in the process, oh well. With all the bodies that drop in this movie, this film at least understand who these villains are and what they're here for. You have to appreciate that.

Suicide Squad: Hell to Pay is by no means the best film in the DCAMU, not by a long shot. It's not even up there with the other solid team-up films in the series, far removed from the heights of Teen Titans: The Judas Contract. But when it gets out of its own way and just lets the action happen and the blood flow, this film finds its footing. Like the squad itself, hell to Pay is at it's best when it shuts up and makes with the violence. And in those movies, when it can just be the bloodiest comic book movie it can be, the movie comes together nicely.