Considering how long The Clone Wars ran for (with a bonus seventh season coming out after Rebels ended), I'm honestly surprised that Star Wars: Rebels only went for four seasons. Of course, it was put out on Disney XD and Disney (like Nickelodeon) has been pretty strict about keeping their shows to a modest, syndication length of 65 (give or take) episodes (which allows a show to run 5-days-a-week for 13 weeks without repeats, a nice quarter of the year of programming). Rebels got just over that mark (75 episodes total) so I guess the writing was on the wall for the show no matter what. 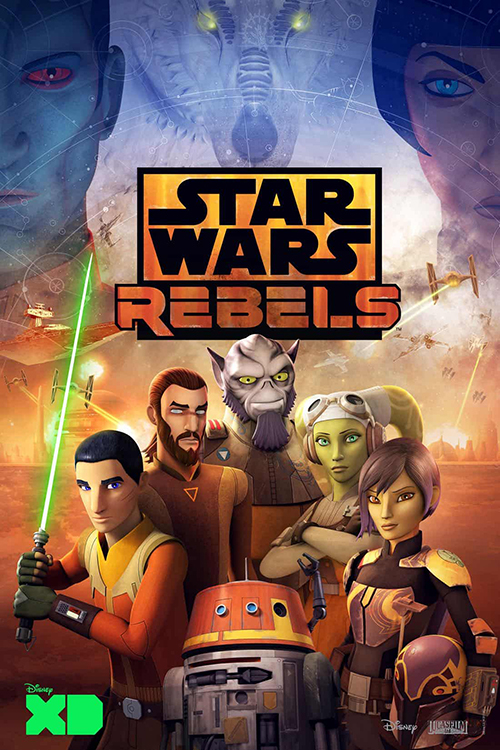 That said, it is nice to have a show that doesn't pad out its main story, that goes in for the kill and does everything it needed to without extra fuss. Considering this was a show about the rise of the Rebellion before the events of Episode IV: A New Hope, the show pretty much had to wrap up at this point no matter what, or it would have been treading well into territory we'd already seen elsewhere. While I'm sure there are fans that would have loved to see the continuing adventures of Hera, Chopper, Sabine, and all the rest in later films (and beyond), the scope of the show was pretty well set. Rebels takes its setup this season, gives it all the due focus in needs, and executes it really well. That's what every fans of show wants from its finale.

This season sees our plucky band of rebels heading back to Lothal (the planet where the series began, and which acted as a hub for much of the first two seasons), now to help free the people of the planet from the rule of the Empire. Lothal is just one planet, but Ezra is absolutely dedicated to freeing it even though the larger Rebellion has other matters they need to focus on. With the help of his team (and surrogate family), Ezra and Co. head to Lothal to see just what has become of the planet in the years since they left and how they can help.

What they find, though, is a planet absolutely ravaged by the Empire. Things got worse and worse on Lothal under the watchful eye of Governor Arihnda Pryce (Mary Elizabeth McGlynn). The people live in a police state, with the Empire draining all the resources of the planet while making its citizens work, effectively, as indentured slaves. Meanwhile, the Empire's people have been scouring the planet, looking for relics of the Jedi that could be exploited to increase the power of the Empire. And then there's the Empire's desire to get more and more Kyber Crystal for some secret project they're hatching, all of this with Thrawn still lurking in the shadows, ready to take out the Rebellion the first chance he gets. It's a lot working against the Rebels if they're going to have any shot at freeing Lothal and kick-starting the Rebellion proper.

In past seasons of the show I complimented the series for finding a way to work a light serialized storyline through the episodes even while it focused more on case-of-the-week matters. That was a nice change of pace in comparison to Clone Wars where much of the series was broken up in four-part arcs that were heavily serialized. It was to Rebels' benefit that it didn't do that kind of storytelling as some of the worst stories in Clone Wars came about because a bad idea was then stretched to four-episode length (such as anything starring the Droids, or Amidala). Even a bad story on Rebels (of which there weren't many) didn't get a chance to linger when we rushed off to another story in the next episode. 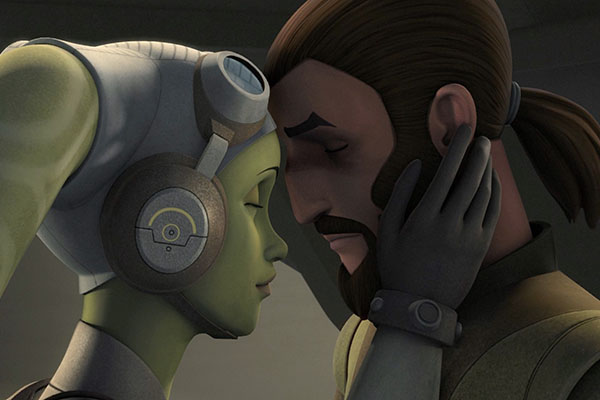 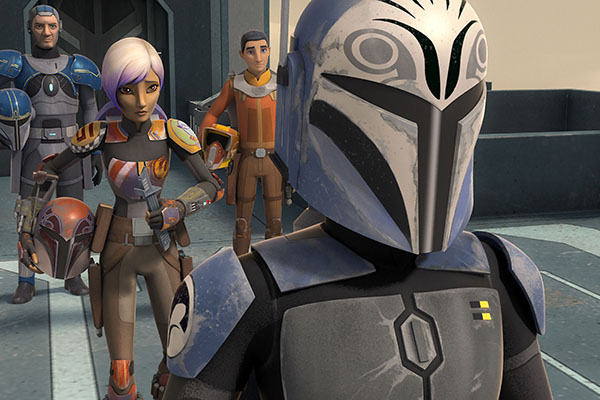 That does change in this season, though, as Rebels goes all in on serialized storytelling for these last 15 episodes. That's not to say its one long movie broken up into 15 parts as there are larger and smaller arcs for the season, but this entire story is focused on Lothal and each episode builds on the previous one all leading to a very specific ending. Where previous seasons had episodes you could skip without it being essential, every episode matters here in this last season.

While that feels a little jarring to the formula of the show the series does benefit from this change in one very significant way: the story isn't just about a pack of Rebels having small adventures but about how their actions on one plant can inspire that planet to throw off the yoke of the Empire, touching off the true, unified Rebellion to come. By focusing these 15 episodes on Lothal, and dedicating all this time to its own rise into the Rebellion, the show clearly and careful illustrates how the Rebellion truly could take on the Empire and win (and it's not just because of Luke Skywalker).

Of course, the season does continue to benefit from Grand Admiral Thrawn. As the first major villain to carry over from one season to the next (as the first two seasons had different Inquisitors, plus Darth Vader, as single-season bad guys), the threat of Thrawn continues to hang over the show. Thrawn doesn't get quite as much to do here, and it's arguable if his brilliant mind is put to as good of use here as in the previous season, but Thrawn does continue to act as an effective heavy in his scenes. He's the kind of villain you wish could show up in further, in-continuity adventures in the franchise. He's that good a presence.

At the same time, one major change could spell strange times for the continuity going forward (and this is spoilers for a four-year-old season). Back on Lothal, Ezra and the team find the Empire ransacking the Jedi temple, but Ezra is able to sneak in and what he finds inside is a crossroads of time. He uses these pathways to track down Ashoka and save her from defeat at the hands of Darth Vader, pulling up years forward in her personal timeline. While it's neat idea in concept, adding time travel to Star WarsThe modern blockbuster: it's a concept so commonplace now we don't even think about the fact that before the end of the 1970s, this kind of movie -- huge spectacles, big action, massive budgets -- wasn't really made. That all changed, though, with Star Wars, a series of films that were big on spectacle (and even bigger on profits). A hero's journey set against a sci-fi backdrop, nothing like this series had ever really been done before, and then Hollywood was never the same. (a franchise that hasn't used time travel in continuity before) opens up a can of worms that, so far, the franchise hasn't addressed. Every time the franchise runners talk about "giving the series a fresh start" I dread how they're going to use time travel to do it. One day it's going to happen. 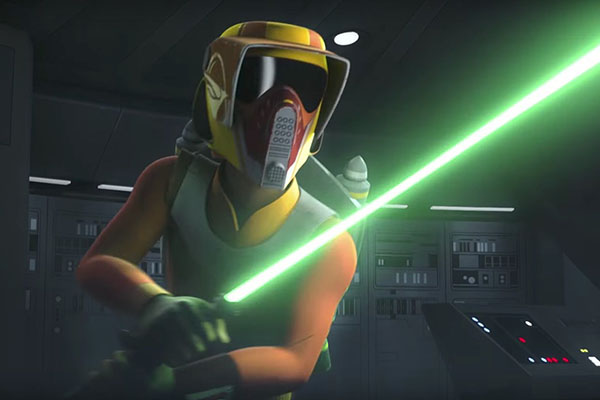 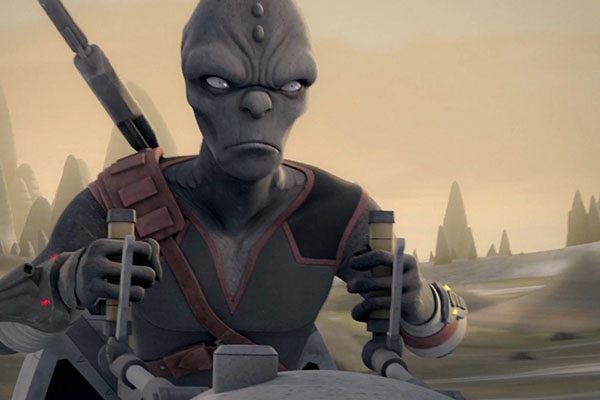 Still, even with that all being said, it is exhilarating watching this band of heroes foil the Empire one last time, and in a big way. There are strong moments of action and of drama in here, and it's fair to say that you shouldn't count on every character making it out of this adventure intact. Rebels has already shown that it was willing to take chances with its characters and this season is no exception. As it heads into the endgame the series starts shedding the plot armor meaning everything is fair game.

This is a season that will likely excite most fans of the series and the franchise. It's a solid high point for Star Wars as a whole, and this series in particular, and it acts as an excellent cap to a great series. Now we just need that "Ashoka and Sabine" show the producers have been pitching so we can continue to spend time in this corner of the universe. I like these characters and I still want to see more.