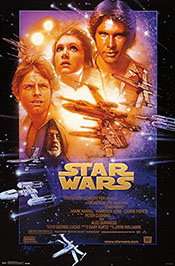 So I was watching the Empire Strikes Back recently, and a thought occurred to me... Well, okay, to be honest, I've had portions of this thought before, but this is the first time I've really thought all the consequences of it to their natural conclusion...

Let me back up and explain:

In the original Star Wars, the technology looks futuristic and awesome. Speeders! Lightsabers! Pulse guns! Death Stars! It's amazing technology, so cutting edge and futuristic. At least, it wasn't until the second set of movies came out. With Episode 1 (The Phantom Who Gives a Fuck), the producers tried to make the technology look "older" than what was in the original trilogy, but everything was so shiny and bright (and there was so much technology because the universe seemed so huge) that it ended up making the original trilogy looked dated by comparison.

Sure, the original trilogy is dated by comparison. It's natural for older movies to seem more aged than newer flicks. I'm not bitching about the progress of cinema. I'm just stating that, because George Lucas and Co. decided to make the second trilogy prequels (which, by design, he had to since he decided to title the original three Episode IV, Episode V, and Episode VI). it just sets up a weird issue of continuity.

This is only made weirder by the Old Republic series of games (and books and comics if I'm not mistaken). I can accept that the technology hasn't changed that much in the twenty or so years between Episode III and Episode IV. The issue is that the Old Republic series is set 4000 years before the movies, and yet technology looks exactly the same. Same lightsabers, same ship designs, same everything. On Earth, technology changes so fast that in twenty years we went from phones the size of bricks to the phones small enough to fit in a closed hand. How could technology make no progress in 4000 years?

Well, there's one possibility: the galaxy of the Star Wars movies is a a dying civilization. Think about it -- technology never moves forward. Plus, the themes and religions of the galaxy don't change a bit. The way of the Jedi (and the Sith, for that matter) stay the same for 4000 years. There's no progress to the civilization. It's just the same forces fighting back and forth for the same few inches of space. The rebels take it and build a "Republic". The the Sith come back and build an "Empire". Then the rebels come back and start the cycle over again. Back and forth for 4000 years (or more, depending on how far back the Extended Universe goes).

At a certain point you have to wonder how much of a surprise it was that the Empire formed at the end of Episode III. Those who fail to learn from history are doomed to repeat it.

And then think about how many people we actually see in the movies. Everyone seems to eventually know everyone else, and the same characters keep showing up in random locations. At the start of Empire Strikes Back, apparently all the rebels are at Hoth. The Empire has been hunting the galaxy for "the Rebel base". Not a Rebel base, but the Rebel base. How many Rebels are there? Like, 200? And they're a threat to the Empire?

If so, that would imply that the Empire is really super small at this point as well. All these little fiefdoms competing for whatever finite resources are left. The galaxy is dying, and it's kill or be kills for the remaining technology, food, and fuel.