Lads, Today We Go to War!

If you talked to Star WarsThe modern blockbuster: it's a concept so commonplace now we don't even think about the fact that before the end of the 1970s, this kind of movie -- huge spectacles, big action, massive budgets -- wasn't really made. That all changed, though, with Star Wars, a series of films that were big on spectacle (and even bigger on profits). A hero's journey set against a sci-fi backdrop, nothing like this series had ever really been done before, and then Hollywood was never the same. back in the day, the Clone War Saga was talked about in hushed tones. I had friends who were way deeper into the saga than I ever managed to get (and that was before midi-chlorians sent me packing) and they would go on and on about how the Clone Wars tore thee universe apart, leading the way for the Sith to take over (and also directly contributing to Anakin Skywalker's fall from grace). Years before the prequel trilogy started up, most of the salient details had been described in novels set in the universe, with details like clones Jedi Knights running around, volcanic death pits, and all kinds of cool, sci-fi ideas that normally wouldn't get shown because they were too expensive to produce. 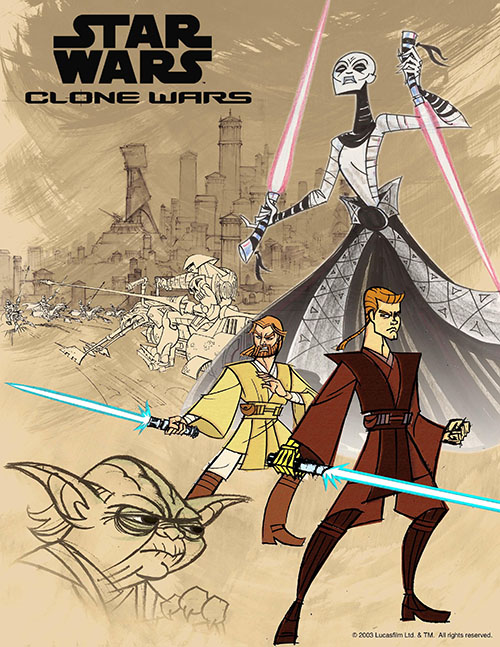 But then George Lucas came along and showed that basically anything he wanted to make could be put on screen via the magic of CGI. Of course what he wanted to make were two terrible films, one of which completely ruined the mystique of the Clone Wars. Gone were all the cloned Jedi and giant battles -- if you go by the movies, every clone is based off Jengo Fett (serving as the DNA baby-daddy) and most of the war happens between Episode II and Episode III. For fans that wanted to watch the movies and get the grand saga of the Clone Wars (the big event basically promised by the end of the second film), this was at least a bit of a disappointment.

Of course, if you were a hardcore fan and paid attention to Cartoon Network then you at least got to the see the Clone War in some form as, over on that network, three seasons of an interlude animated series aired during the long wait between movies two and three. Whether or not the series gave you enough of the Clone Wars to sate your needs is probably a matter of personal taste, but for me this series gave me about as much of the saga as I was craving. It's a quick series of episodes that give us space battles, planet-side battles, and a few amusing interludes before concluding right as Episode III picks up.

The series really is best described as a set of mini-sodes although, once they were stitched together, they really form two short, made-for-TV movies. Released across two volumes (seasons one and two, which was made up of episodes ranging between three and five minutes in length, fit onto Volume One on DVD while Volume Two comprised all of season three, which had five episodes in the 15 minute range), these episodes paint a picture of the galaxy at war. They aren't really plot heavy -- most of the time we're just seeing interludes in the war itself, like clone troopers defending a city or Mace Windu taking on an entire battalion of droid soldiers on his own -- but they do give us more action and adventure than either of the previous two movies had managed. Unlike the theatrically released films, Clone Wars very much puts us in the middle of the war.

That's not to say these episodes are a huge success, though. Because there's very little story in these sequences, its hard to really get too invested in the action. As a series of action sequences, Clone Wars succeeds, but as a movie-length interlude to keep fans invested in the story of the Prequel Trilogy, the series falls short, and that's because there's no story to latch on to. 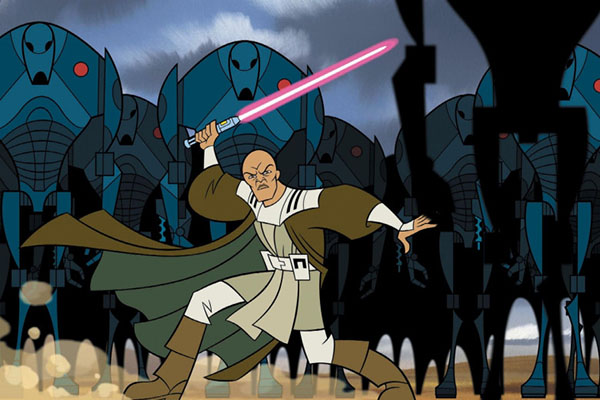 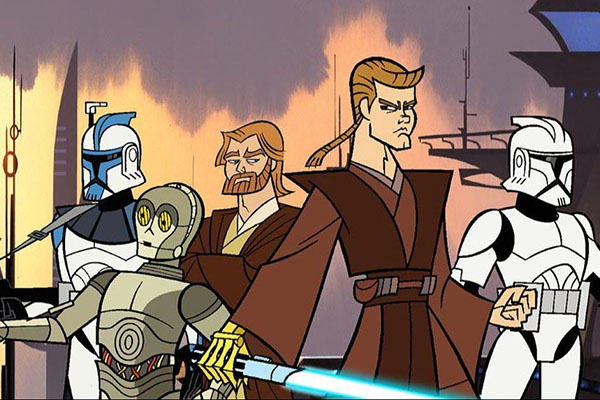 In the first Volume, for instance, we basically have a couple of plot-threads: one features Obi-Wan leading a crew of clone soldiers on a planet while, in the other story, Anakin is aiding the defense of the planet from space (because, as seen before, Anakin is a great pilot). This does give us plenty of great action, both on the ground and in the sky, and its animated cleaner and clearer than anything Lucas showed us in the prior two films. Unfortunately watching sequence after sequence of characters battling their way into bases and across the stars is only thrilling for so long. The story is the defense of the planet, nothing more. There isn't some special techno-baubble they need to get, no special goal they need to complete to aid the war effort. No, they simply are on this planet because the evil droid army is here and it's a front to fight.

Now, the first Volume does pick up at the mid point when an actual adversary is introduced, Asajj Ventress, a fallen Jedi and would-be apprentice to Count Dooku who is sent to kill Anakin to cement her Sith status. This leads to Anakin following Ventress to a distant planet so they can fight each other, mano-a-mano. Having someone evil to root against helps (certainly a lot more than just watching nameless clones fight nameless droids), but even here the story is minimal. We're left to assume that Ventress is just a pawn, a means to an end to aid Anakin's fall from grace (leading him to become Darth Vader eventually), but that's a supposition we have to make for ourselves. And if we're new to the whole series and just watching this in chronological order, this storyline wouldn't mean much to us -- we'd be happy Anakin survived and wouldn't put too much stock in much else.

By contrast, Volume Two puts the focus much more squarely on story -- the episodes are longer and setup is such a way to tell a couple of clearly defined tales. The main story is about Obi-Wan and Anakin going to a remote planet to stop some secret plan the Trade Federation has cooked up. There they find that the bad guys have been experimenting on the indigenous, tribe-like population of the planet, turning them into mind-controlled beasts. This storyline is odd because it involves two of the main characters having an adventure that in no way, shape, or form connects to the rest of the series. Having seen the third film once before I know that this tribe isn't of any consequence to the future adventure about to be had, so this is basically a tale without weight or merit. Even viewed on its own, though, without foreknowledge, the story is still bad, like a rejected Star TrekOriginally conceived as "Wagon Train in Space", Star Trek was released during the height of the Hollywood Western film and TV boom. While the concept CBS originally asked for had a western vibe, it was the smart, intellectual stories set in a future utopia of science and exploration that proved vital to the series' long impact on popular culture. C-plot.

The other storyline in the Volume is much more interesting. It starts with Yoda and Mace defending Coruscant from the suddenly invading droid army, and then leads to three other Jedi Knights having to lead the Supreme Chancellor out of the city and to an evacuation ship, all while new villain General Grievous stalks them throughout the underbelly of the city. Tying this closely into the main planet of the movies, the capital of the whole Republic, and putting characters we know -- the Chancellor (who is totally not a villain, no way), Yoda, and Mace -- in the story gives it a solid connection to what's to come. Plus it's a well plotted chase sequence with a lot of action and solid pacing. Unfortunately the three leads are Jedi we barely know (and who don't make much of an impression in either of the movies surrounding this series), meaning we care just a little less if they succeed or not. 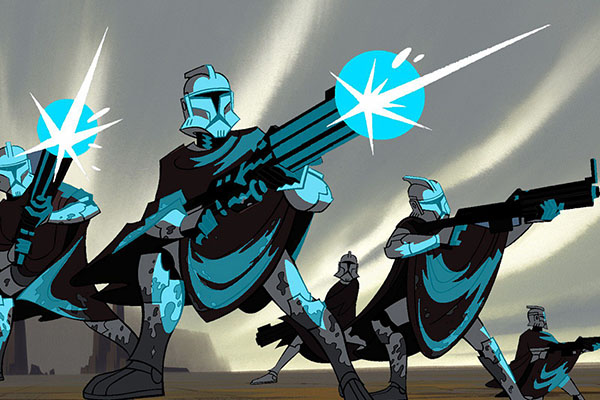 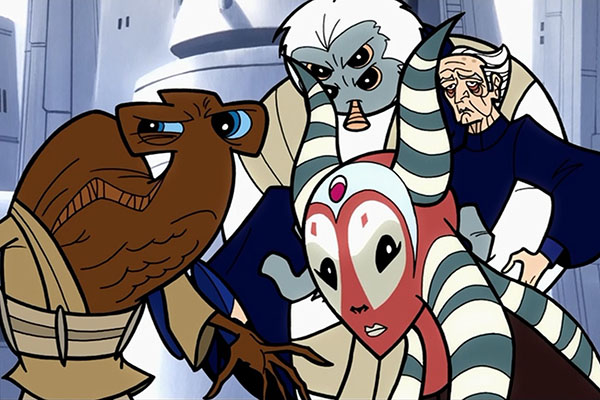 Of course, part of the problem there is that fans of the whole series already know who Supreme Chancellor Palpatine really is, so it's hard to care that much if the Jedi succeed or not. It's like the series really wants us to invest heavily in everything its showing us but just couldn't quite figure out who to involve in each story or how to really stick the landing. Or, more likely, the animators were just given the scripts for Episode II and Episode III and were just told to make sure key characters ended up at certain points before the third movie began. It weird and haphazard and not entirely satisfying.

That said, for a series of episodes to just help fill in a gap without actually touching continuity in any meaningful way, Clone Wars does at least manage to pass the time amiably enough. It is solidly animated, stylish and cool. And it's well acted, with James Arnold Taylor doing a pretty good job as Ewan MacGregor impersonating Alec Guiness's Obi-Wan and Terrance "T.C." Carson doing a spot-on Samuel L. Jackson as Mace Windu. Even Anakin voice actor Mat Lucas does a good job of making his character less annoying and more enjoyable, something live actor Hayden Christensen never managed.

Really, Clone Wars is an odd duck. It's not lengthy of detailed enough to give a solid story, nor varied enough to keep viewers coming back again and again. If all you want is about two hours of war stories before getting back to the main event, the trilogy of films, this isn't bad. And, certainly, the series is more engaging than anything the first two films gave me. At the same time I can totally understand why Lucasfilm came back in and started a new version of Clone Wars in 2008 -- this edition of the story left a lot to be desired.

The biggest continuity issue I noticed, just from the two movies to come before, is that Anakin's arm is robotic in the wrong place. At the end of Attack of the Clones, his arm is sliced off (by Dooku) right below the shoulder (and is thus replaced, by movie's end, by a robotic arm). Here, though, the robotic arm picks up right below his elbow, meaning he has a whole lot more meat left. It's a weird issue, but I assume that's because this animated series went into production before the movie was finished, and thus the animators had to guess where the lost arm would start. To their credit, the production team kept the arm amputated in the same spot for all three seasons, so at least the series is internally consistent.

Also, those hoping for a proper conclusion to this series, making it its own self-contained whole, will likely be disappointed by the ending. This series stops right as the third movie, Revenge of the Sith, picks up which makes this quite a neat little interlude between movies two and three. It doesn't really help it stand up on its own, though.