A Batch of Badness (But In a Good Way)

Okay, I will admit it: this is how this series needed to end. For all that the fans talked about how The Clone Wars "gets better as you get through the series", I do think the series was pretty uneven start to finish. It did managed to find better momentum as the series dragged on, but there were just as many bad arcs (usually featured the Droids or Amidala) as there were good arcs (generally arcs about the Clones or Ashoka). After the sixth season came out on Netflix, a season that felt absolutely inessential, and that also ruined the perfectly solid series finale at the end of season five, one had to wonder if there was any point to yet another season of the show. 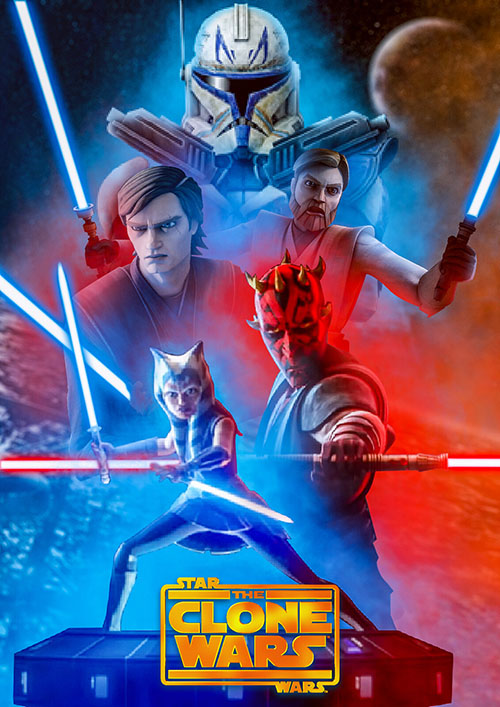 Well, season seven clearly answers all of that by giving us everything we wanted: Clones, Ashoka, and then Ashoka and the Clones. This season feels like a proper answer to all the flaws of what came before, trimming out all the refuse from the previous seasons, tightening up its focus so it cane tell stories that actually matter. Stories that, you know, actually affect, and are affected by, the events of Episode III. It's a solid and natural conclusion for Ashoka's arc (at least for now) and really justifies the path she's on. Oh, and it launches a spin-off as well in glorious fashion. Honestly, this is everything The Clone Wars should have been.

Starting off with the first arc of the show we get "The Bad Batch". These are a group of clones given special mutations (essentially special powers) so that they can run the missions other clones can't handle. The team -- Hunter, Wrecker, Tech, and Crosshair -- are an unconventional group, but they do get results. They're brought in by Rex, one of the clone commanders we've followed since the very start of this show, to track down the signal of Echo, a clone (and close brother of Rex) who the commander lost at a battle months back. He thought Echo was dead, but with the help of the Bad Batch they go on a mission to find Echo and, if still alive, bring the Clone back home.

This is a solid story in its own right, made great by the new team of clones put together. Honestly, the series nails the characters of Hunter, Wrecker, Tech, and Crosshair instantly, giving us a new, and very agreeable, group of clones to enjoy despite not having followed them for all the previous seasons. Yes, suddenly throwing in new characters out of nowhere and letting them steal the spotlight is a classic "back door pilot" move, and this show is pretty blatant about it, but these clones are awesome and very deserving of their own show (which they did eventually get).

From there we jump over to Ashoka, our fallen Jedi, who hasn't really been seen since season five. Since then, Ashoka has been bumming around Coruscant, keeping her head down and staying out of the way of authorities. When her speeder bike malfunctions, though, she ends up crashing into the shop of Trace Martez, a mechanic. Trace is a young teen, like Ashoka, and the two end up striking a quick friendship... once Ashoka learns to trust someone again. Trust is hard to come by, on both sides, as Trace and her sister, Rafa, have been on their own for years, relying only on each other and no one else. Letting Ashoka in at all is a big move for Trace. 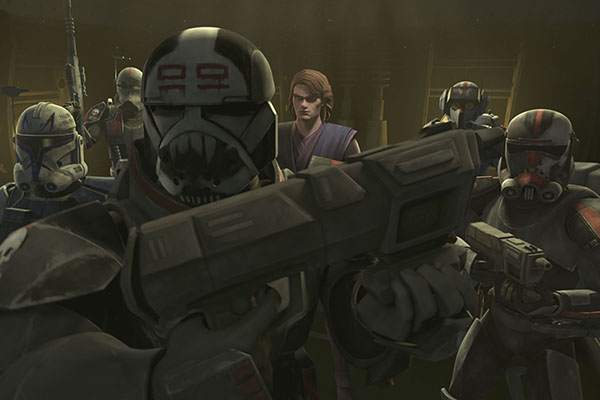 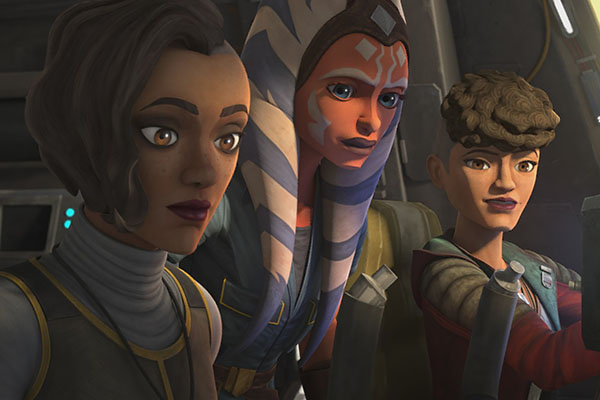 Unfortunately, their friendship is quickly tested when one of Rafa's schemes -- transporting Spice for the Pike Crime Syndicate -- quickly goes off the rails . More specifically, Trace freaks out realizing the spice, which she thought was for medicine, could be used for illegal things, so she dumps it into space. An attempt to get out of the deal, and escape before the Pikes realize their Spice is gone, goes pear shaped and soon all three girls are prisoners of the Pikes. Ashoka will have to use all her skills to help her new friends escape this very serious predicament.

Of the three arcs this is probably the weakest only because it doesn't really feel like it has much bearing on the greater story. It's a pretty self-contained adventure far removed from the troubles of the war, and (without future knowledge of stories to come) doesn't really introduce characters we would need to know for the future (although Trace and Rafa would later show up in an episode of The Bad Batch). But it does help Ashoka on her path, letting her realize there's another way to use her Jedi powers, and her own personal morality and honor, to help people. And this sends her on her own journey for the next, and final, arc of the series.

We now jump ahead some time as Ashoka is working with Bo-Katan (formerly of the Mandalorian Death Watch) on a plan to free Mandalore from the rule of Darth Maul. After meeting with Obi-Wan and Anakin (and having a brief, but heart-felt, reunion), Ashoka heads off to Mandalore with Commander Rex and a troop of clones, plus the remnants of the Death Watch under Bo-Katan's command. They strike at the city, searching out Maul, but the fallen Sith is too smart, leading a merry chase that, eventually, ends in a confrontation between Ashoka and Maul, with Ashoka coming out on top.

However, things aren't going to end well as, on their way back to Coruscant to deliver Maul, Order 66 is given. Suddenly the clones that Ashoka has led, and considers friends, turn on her, considering her a traitor to the Republic. This put Ashoka, all alone on a Republic cruiser, forced to battle her way out and find a way to survive in this suddenly very changed new galaxy. Everyone thought they were going to win the war and bring peace to the galaxy, but there were plans far beyond their comprehension... 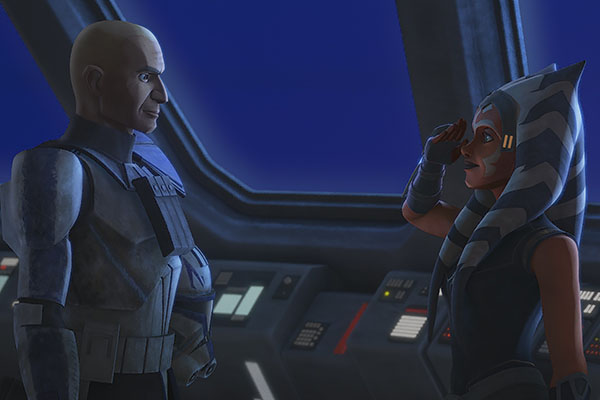 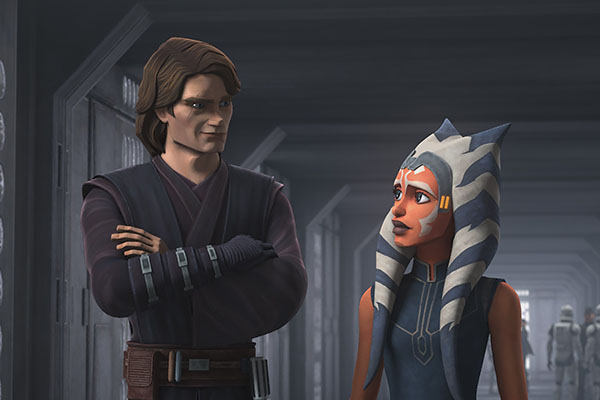 This arc is really what I think everyone was waiting for as it's the story that overlaps with the events of Episode III. The introduction of Ashoka so long ago (all the way back in the pilot movie) raised the very real question of how could Anakin have an appreciate between Episode II and Episode III. Her leaving the Jedi order at the end of season five helped to answer that some, but this arc shows how Ashoka's story truly overlaps with Anakin's during these pivotal events.

Honestly, my original guess was that because she was no longer a Jedi Ashoka should have been safe from Order 66, but the series deftly says that, "Ashoka is a special case that has to be dealt with." Because of that, we get an absolutely thrilling series of episodes that goes from one action set-piece to the next, from the war at Mandalore to the duel with Maul, and then Order 66 and the fall of the Republic, all from the perspective of a character we've bonded with over seven seasons of television. This arc gives Ashoka the send-off she deserved and it's an absolutely epic way to tie in the series to the events of the last film of the Prequel Trilogy.

Overall, this season is everything I wanted from The Clone Wars. More to the point, it very nearly redeems the series as a whole. While I can't see myself going back to watch the whole series again, it's arcs like these from season seven that make me think there's value in a selective re-watch of the series. Certain arcs and episodes are great, and there's enough meaty story (especially among the Clones and Ashoka) to make watching those stories again a treat. In the future I think I'd probably just pick bits ad pieces of the series out, but I know for sure I'd watch all of season seven again. It's a real show-stopper.