I'm Hot and Tired and Bored and Why Am I Here?

I'm not really an amusement park kind of person. I can understand why some people like them, the thrill of getting on rides and doing something mildly dangerous (or, at least, something that feels mildly dangerous) all while surrounded by sights, smells, and sounds that evoke your favorite media. Certainly parks like Disney World, Busch Gardens, and Universal Studios all have their fans and all work to evoke that kind of fandom nostalgia so people will spend ridiculous amounts of money outside, surrounded by other like-minded fans, all so they can spend some time on rides, surrounded by mascots, and paying for souvenirs and food. 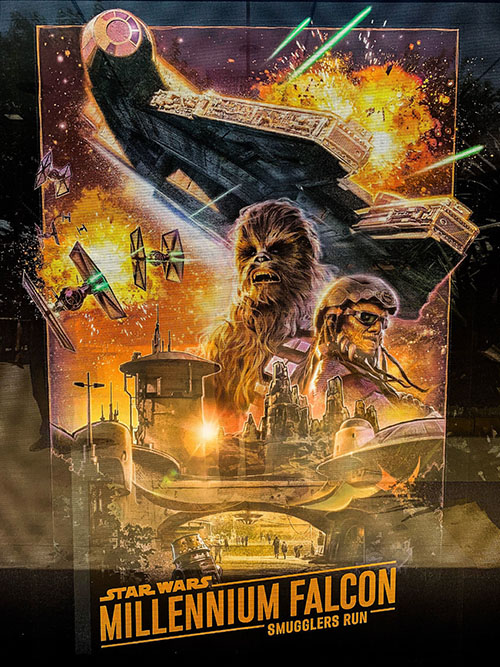 Amusement parks are, in no uncertain terms, a commercial racket, but I'm a nerd and I'm willing to throw my money at whatever commercial racket is currently on display. I'll rail about how awful it is that this company or that one is trying to bleed money out of their fans and then turn around and spend gobs of money on the latest NintendoSince 1983 (with the release of the Famicom gaming system in Japan), Nintendo has proven to be a gaming company dedicated to finding what gamers want, even when the gamers don't know it themselves. From dual-screen systems, to motion controls, to convertible home console/portable consoles, Nintendo regularly proves that the weirdest innovation is exactly what the gaming community needs. device that does the same thing as the last Nintendo device or I'll buy the next Teenage Mutant Ninja TurtlesOriginally dreamed up as a parody of Marvel's Daredevil comics (going so far as to basically reproduce to opening shots of that comic's hero gaining his powers), the Teenage Mutant Ninja Turtles not only launched a sudden boom of anthropomorphic fighting animal comics but have, themselves, starred in multiple comics series, TV shows, and movies. figure that's only slightly different from the last one I purchased. Anything I have to say about crass commercialism is coming out of one side of my face as I quietly hand money to my Marvel Cinematic UniverseWhen it first began in 2008 with a little film called Iron Man no one suspected the empire that would follow. Superhero movies in the past, especially those not featuring either Batman or Superman, were usually terrible. And yet, Iron Man would lead to a long series of successful films, launching the most successful cinema brand in history: the Marvel Cinematic Universe. overlords.

I mention all this because, touring around Disney Hollywood Studios (which was at one point Disney/MGM Studios and will likely change its name again sooner or later) as well as EPCOT and Disney World, I couldn't help but feel skanky around all the crass commercialism. It was at a level that I felt dirty about and no amount of my acknowledging that I was spending money to be there (like every other sap) did anything to make me feel better. The theme parks are cash-generating machines and it's gross just how bad it is. Of course my feelings might have been colored by the fact that apparently the recent weekend we went there was one of the busiest of the season with every ride racking up 40-plus minute waits (with the most popular topping two hours), so instead of riding rides all I could do was marvel at the crass commercialism.

If you're wondering why I was at Disney if it bothers me this much, I actually haven't hated the park in times past when I've gone there. My wife used to work at Disney (as one of their summer student peons) and she liked to go back on the regular to revisit a place that felt a bit like home. So I've been to Disney World two more times than I ever expected (which would be twice in my adult lifetime) and it's only on this second time around that the park bothered me. It was hot, it was stuffy, it was crowded with people, and there was basically nothing to do unless I wanted to stand in line for two hours. And I got to see it a lot, especially in the first day of our trip, as I was essentially stuck at Disney Hollywood Studios for 12 hours.

Why was I trapped there? Because my wife had grabbed one of the last appointments to make one of those special lightsabers as Savi's Workshop in the newly opened Galaxy's Edge section of Hollywood Studios, and it was at the very end of the night. We showed up at the park early assuming there would be enough to do there to last a full day, and, man, were we ever wrong. (Oh, and in case you're wondering, yes, we do have a second article all about Savi's coming up). 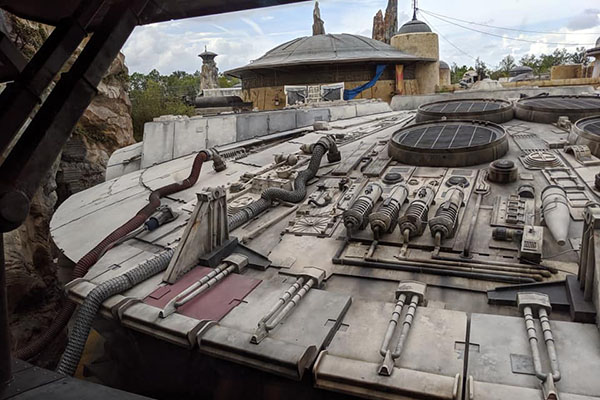 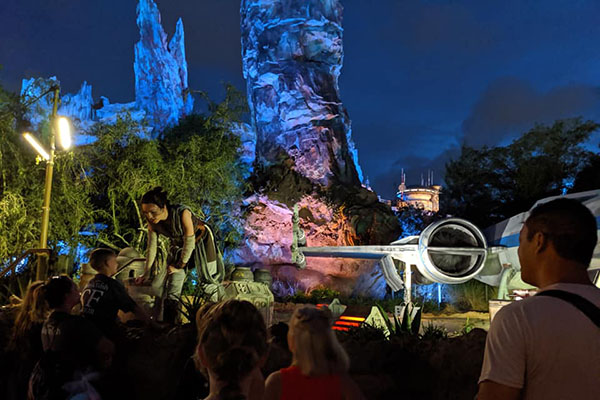 Before we get to Galaxy's Edge, I first want to note that Hollywood Studios really isn't that great of a theme park. Maybe I'm spoiled by the likes of Busch Gardens and King's Dominion, both of which were local to me when I was living in Virginia, but those are parks that are loaded with things to do. There's a ride around every corner, lined up like its a Carnie convention. I've never had to stand in line for two hours (or even an hour) for any ride at this parks largely because rides are their primary focus. Disney, of course, has a different opinion, wanting you to get an "experience" while you're at their parks, so the rides are scattered around, with other events like theaters, character meet-and-greets, and plenty of backdrops for you to marvel at the works of Disney.

And if you want an experience, sure, Hollywood Studios can provide for a short while. There are lots of sights to see, like the little Muppet Land, the well designed Toy Story Land and, of course Galaxy's Edge. And if you have three or four hours to kill, come in on a day where the crowd isn't too big, and can ride the eight or so rides actually at Hollywood Land, you could probably waste away a fun afternoon. I don't know if that experience is worth the $100-plus price Disney charges for a pass to this park, though. There's no denying that after 12 hours, though, I felt like I'd spent $100 bucks wandering around the park. Final count was six laps of the whole place simply because walking the park is the only activity that was worth doing.

Bear in mind that the Alien Adventure (or whatever it was called) at Toy Story Land had, regularly, a 40 minute wait and it's nothing more than a kiddie version of the scrambler. It was a fun ride, but not worth standing in line for 40 minutes (which I did, indeed, do). I bailed on standing in line for Slinky Dog's roller coaster because that was an 80 minute wait minimum (with no Fast Pass access available all day). And the Aerosmith Rockin' Roller Coaster was down half the day and when it was up it was at least an hour-long wait for it. It was ridiculous, really.

But then there was Galaxy's Edge which, on its face, was a pretty cool experience. You walk into it from either the Muppet Land area or Toy Story Land, and as you enter all the noise of the rest of the park -- the ride sounds, the music, that oppressive horde -- fades away. There's a hush to the place, a quiet atmosphere that feels lived in. The point of Galaxy's Edge is to give you an experience of actually being Inside Star WarsThe modern blockbuster: it's a concept so commonplace now we don't even think about the fact that before the end of the 1970s, this kind of movie -- huge spectacles, big action, massive budgets -- wasn't really made. That all changed, though, with Star Wars, a series of films that were big on spectacle (and even bigger on profits). A hero's journey set against a sci-fi backdrop, nothing like this series had ever really been done before, and then Hollywood was never the same.. The restaurants served themed food, the cast members are all dressed like Star Wars characters, and you can see big moments between Rebel fighters (like Rey and Poe) against Kylo Ren and Stormtroopers. That's the promise of Galaxy's Edge. 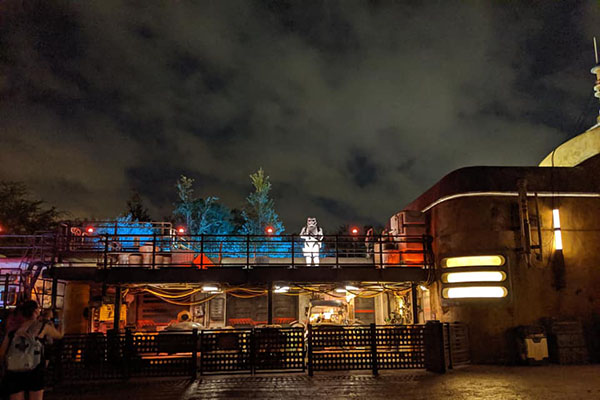 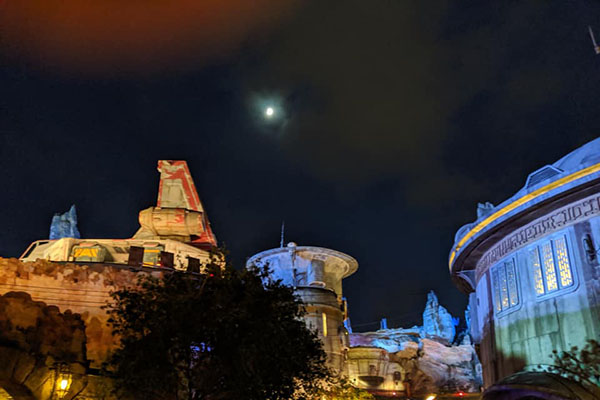 Sadly, the promise doesn't quite live up to expectations. Inside this section of the park there's only one actual ride, the Millennium Falcon Smugglers Run, a VR-style game where you and five other people hang out in a pretty darn authentic recreation of the titular ship, crew the cockpit, and go on a bit of an adventure, video game-style. It's fun, and when the crowds thinned my wife and I were able to ride the ride twice. But that's the only thrill ride experience in Galaxy's Edge and, having done it twice (the second time because what else were we going to do?) it's not exactly worth the price of admission. This section needs more rides (the other Star Wars ride, Star Tours, isn't even inside Galaxy's Edge) and things to do.

Don't get me wrong, hanging out inside this section of the park is pretty cool. It has the right ambiance that it really makes you feel like you're inside the set of one of the movies. I wouldn't go so far as to say you feel like you're on an alien planet, but it is pretty fun to wander around in an area that could easily be used for a Star Wars film. And it was cool seeing Rey working on her X-Wing, or to see Kylo Ren, flanked by two troopers, harass some park goers. But these moments were few and far between. Most of the time it was just two nameless troopers wandering around, or standing guard, and you got the vibe that you were in some backwater so remote even Tatooine feels like a metropolis. It certainly didn't help that this was the least crowded section of the least crowded park at the Disney complex, making you feel like you'd wandered into an abandoned back-lot.

But then, maybe that's the best way to experience Galaxy's Edge. It didn't have a lot of people in it so it was actually relaxing to wander around in the area. If just a little more had been going on -- one more ride, a few more good moments with the characters -- this might have felt like a real winner. As it was, Galaxy's Edge was easily the best section of Disney Hollywood Studios, and if that's not damning with faint praise, I dunno what is.

If you're already planning a trip to the Orlando area and want to go to the Disney Parks, and if you're also a far of the Galaxy Far, Far Away, I think you could actually have a good time in Galaxy's Edge. Just do yourself a favor and either make this park part of a Park Hopper pass (so you can then go and enjoy a bit of food at EPCOT), or wait until mid-day and get one of the cheaper afternoon passes. Even with Galaxy's Edge, Hollywood Studios is not worth a full price admission (and I say that from the experience of being there all damn day).