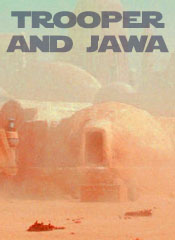 Sometimes you just get a fun, ridiculous idea that won't fit in a tweet. Trooper and Jawa is one of those ideas, a blaxploitation thriller set in the Star Wars universe. Tell me you wouldn't watch something like that.

I dunno why it is I like blaxploitation movies so much. I'm white. Like, really white, "any less black and you'd be clear" white (to quote the movie Go). It's not like the culture of the era ('70s black culture, to be specific) strikes a chord with my own person sensibilities (at least, outside the idea that those of use outside the upper 1% are stuck looking in without, probably, having a chance to become one of the 1%). I certainly can't stand the pacing of most '70s movies (which are universally slow), and many entries in the blaxploitation era are really, really bad.

Sure, some of that can be chalked up the being 30, 40 years removed from when the movies were made. Acting, cinematography, script, pacing, on and on and have changed in the intervening years. I'm sure 20 years from now we'll look back and many movies of those generation, blockbusters that made so much money, and go, "why the fuck did we like that again?" Everything shifts.

And yet, knowing I'll find many of the movies in the genre cheesy (for all the aforementioned reasons), I still enjoy so many of the flicks. The stand out for me is Blacula since it's blends the blaxploitation genre with my other personal fave: classic horror movies. For my money Blacula is one of the best Dracula-related flicks out there (not that it's a high-bar to get over -- most Dracula adaptations are also really, really bad).

So yeah, every once in a while I get an idea for a blaxploitation movie I'd love to make. Of course, I'm white so I doubt that will ever happen (the couple of african american film makers in my area I've taken the idea of making a blaxploitation flick idea to have said, "you can't do that because you're white," which I guess I can kinda understand even if I would be reverent to the genre). Trooper and Jawa is one of those ideas that, if I had the means and were on Disney's payroll and could somehow convince them it was a good idea (as if), I would make it.

One's a tough-talking, down-on-his-luck former stormtrooper. The other is a cut-throat black-market dealer with a secret heart of gold. Together they solve the hard cases and help the needed on Tatooine. They are Trooper and Jawa.

"We've been from one side of this hell-hole of a galaxy to the other and we still aint found that damn fugitive bounty hunter. Searched through every saralac pit, jungle moon, and den of scum and villainy we can find. That honky just don't want to be found."

Seriously, I don't know about you but I would watch that movie.