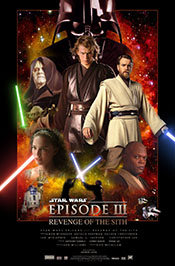 Breaking tradition with the previous two movies, Episode III has an easily describable plot. Sure, Revenge of the Sith meanders around a lot,, but at least you know, coming out of it, what the heck just happened and why you should care... at all...

This movie opens with a huge battle as our heroes (Anakin and Obi Wan) are chasing down General Grevious, leader of the evil Droid army aboard his ship. See, he captured the Chancellor (who we all know is a bad guy, and the heroes suspect it as well, but if they didn't rescue the man, there wouldn't be much to the third movie), and the Jedi have come to rescue him. This gives way to a fairly intense crash sequence as the ship comes plummeting out of the sky.

It's a pretty quick reintroduction to these characters. Anakin, now a cocky pilot/Jedi (as opposed to the whiny pilot/Jedi he was in the second movie) is the "take command, act first and think later" part of the duo. Obi Wan is the thoughtful, reserved member.

Honestly, in a different situation they'd be on an Odd Couple-like sitcom.

After all this, Anakin has a dream that Padme will die, leaving him emo and alone. Since his marriage to her is secret, he can't reveal it to the Jedi. So he goes to the Chancellor (obviously) who says he can help the poor boy... but the young Jedi has to join with him on the Dark Side.

Meanwhile, Obi Wan runs around a lot and kills things; then he fights Anakin. And, if you've seen the original trilogy, you know more or less how that goes, and how the movie ends.

While I realize my summary of the plot of the movie is fairly flippant, it's not nearly as bad a flick as Episodes I or II. Let's be fair: I expected this movie to suck. It had no right to be any good (considering its recent lineage), but it wasn't anywhere near as bad as I expected it to be -- which is about as high of praise as I can give.

The best part of the movie (like the second film) is the action. Lucas may not be able to get convincing performances out of his thespians, but the man can really crank out action sequences. From the opening space battle, I was glued to my chair, letting the lights, sounds, and camera angles pour into my eyes. It was certainly a feast.

This movie has so many visceral battle sequences it's not even funny. I caught myself on more than one occasion going "ooch" on a tough hit, even though I knew more than half the on-screen characters were fake, created on a computer; that was how good the action was.

Plot wise, again, this movie scores. Lucas has stated that this flick contains 60% of his ideas for the "prequel" trilogy of flicks. It shows, with one of the most coherent and lively plots in the Star Wars franchise. In fact, there's almost so much going on, the last hour (of a nearly 3 hour pic) felt rushed as Lucas tried to get everything out. A bit of a flaw, in fact, but I liked too much story than having to deal with another pod-race montage.

Sadly, not everything was great. The acting is still a sore point in the series. I gotta lay the blame for this (again) on Lucas, as the actors that I felt did the worst jobs (Samuel "Action" Jackson and Natalie Portman), are fantastic actors in pretty well everything else they do. They just come across as so flat they might as well not be in the picture. On the flip, Hayden Christensen does a superb job. He delivers a much more nuanced performance than the whiny kid in Episode II. I understand why, in some respects, Anakin had to be so annoying in Episode II (and even Episode I), but these are supposed to be movies, diversions, and having him be watchable for once was a joy.

And let us not forget, again, Ewan MacGregor. He should just be allowed to have his own "Obi Wan Adventures" movies. I'd pay to see those flicks... so long as George Lucas doesn't write them.

It's a feat that I liked this movie at all, but it still pales in comparison to the original trilogy (even Return of the Jedi with its Muppets). So, I guess another way to look at it is that: the first two Episodes of this set put the bar fairly low. Episode III had an easy time popping up over the bar, but that doesn't make it a great movie. It's more enjoyable that those that came before, but for the fans that prefer the old trilogy, this movie isn't going to make you appreciate the new trilogy any more than before.