Rise of the Rebellion!

I will of course always admit that I wasn't sold on the idea of shows set during the early days of Imperial rule in the Galaxy Far, Far Away. Considering the setup of the story, that the Empire rises in Episode III and then we watch it fall during the Sequel Trilogy, one has to wonder just what kind of story could be told in the 20 or so years between Episode III and Episode IV (or Rogue One if you want to be pedantic). 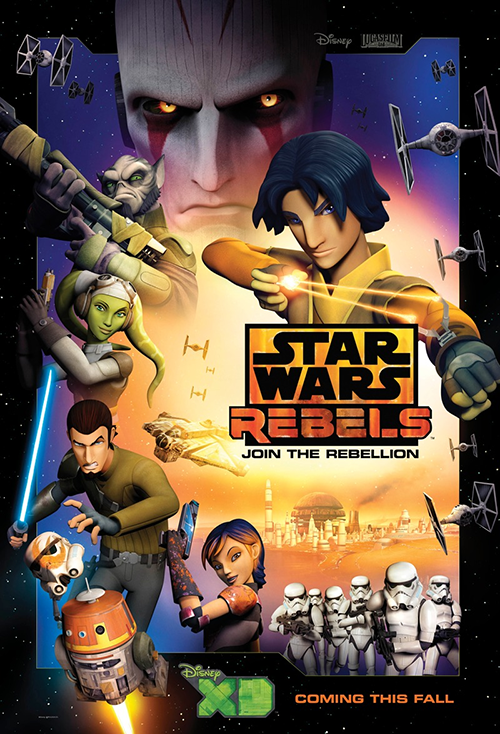 My opinion changed, though, once I actually sat down to watch Star Wars: Rebels. Although I'd seen the charms of the show when I'd checked out the top five episodes of the run. That taste let me know there was some good to be had in the series, but it was still a long way to go from that to actually feeling like an essential part of the franchise. But siting down and watching the whole of the first season I do have to admit: I'm hooked.

The premise of the show is pretty simple: Ezra Bridger (Taylor Gray) is a street rat (don't call him "Aladdin" although he's absolutely Aladdin) from the desert planet Lothal. Forced to grow up on his own for years after his parents were killed by the Empire, Ezra has learned a ton of skills that give him an edge over the flunky stormtroopers that dot the city. His schemes put him on a collision course with the crew of the Ghost -- Han Solo-like scoundrel (who was also at one point a Jedi), Kanan Jarrus (Freddie Prinze Jr.); Twi'lek pilot and captain of the Ghost, Hera Syndulla; Mandalorian teenager with a flair for graffiti (and explosives), Sabine Wren (Tiya Sircar); the muscle of the ship, the Lasat Zeb (Steven Blum), and their mouthy droid C1-10P (aka "Chopper", played by himself but in reality voiced by Dave Filoni) -- and soon the crew of the Ghost realize that Ezra is smart, capable, and has skills they could use, so they let him become a member of their crew.

From there we then watch as the crew of the Ghost go on various missions, winnowing away at the Empire on the edges of Imperial territory, all while taking jobs to get just enough cash and supplies to get by. And, along the way, they'll find themselves pulled deeper and deeper into the machinations of the Empires, especially once a special agent, the Inquisitor, is sent to hunt down the crew of the Ghost and kill them all. It's all very Firefly, just filtered through a Galaxy Far, Far Away (and without the awkward conversations about how there's a legal prostitute on board to give them all "credibility").

The first thing I noticed siting through the first season of the show was that it felt like Star Wars. That might be a weird comment to make but the fact is that very little of the official products to come out after the Original Trilogy had the same spark and style as those first movies. Say what you will about the Prequels but they expressed a very different vision of the Galaxy Far, Far Away than what George Lucas and his team first saw all the way back with A New Hope. Back this it was just a rag-tag group of minor heroes who get sucked into an adventure far beyond their scope. That's Rebels, including the desert street rat (Ezra here, Luke before) that apparently will be the hope that helps to turn the war. 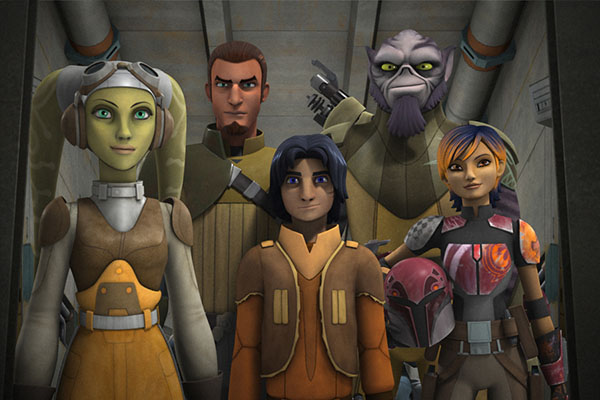 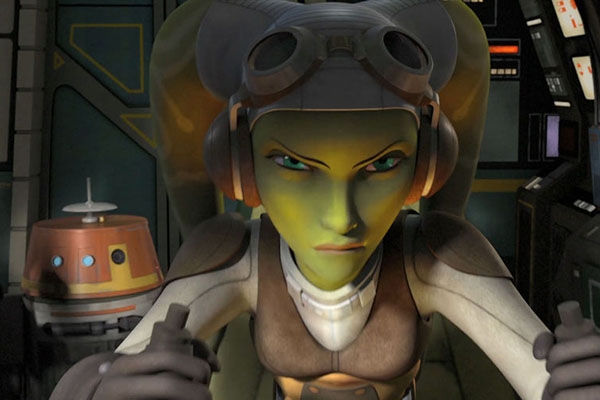 Watching through this season I found myself sinking in to the familiar feeling I got with the early movies, that vibe of watching these guys that aren't traditional heroes figuring out their own path through the story while forces way above their pay grade battle for the soul of the galaxy. It's a cool angle to get back to, something that hadn't really been seen in the franchise since the Original Trilogy ended. The Prequels (and The Clone Wars) had a very different perspective on their stories, and while it still clearly was set in the Star Wars universe it didn't really feel like Star Wars.

It helps that I genuinely like all the characters on the show. Yeah, sure, some of them take some time to grow on the viewer -- Zeb is gruff and a bit of a prick initially, and Chopper is just an asshole (which is amusing from a droid) -- but the overall chemistry of the team is undeniable. The series wisely doles out their stories slowly over time, keeping the fact that Kanan is a Jedi secret for a couple of episodes, and then slowly trickling out other facts over time to keep the viewers engaged. You come for the fun episode-of-the-week action, but you stay because there's so much story coming out over time.

The structure is also better suited to weekly television than The Clone Wars. That series settled into long arcs, four episodes or so, to tell broad stories. While that worked (most of the time) it did also require work not only from the creators (to create stories that justified that length) but also a time commitment from the viewers. It wasn't instantly consumable as you liked. Rebels is different, having single-episode stories. The episodes don't try to tell some grand arc but, instead, let the viewers enjoy the pleasures of the moment. I think, for the style of show here, this choice suits it really well.

The other thing that Rebels does which The Clone Wars never managed is that it actually has villains that feel like real characters. Dooku and Ventris and all the rest were cut-outs of characters that the show failed to flesh out, but on Rebels there's a set cast of villains that appear again and again, slowly getting developed (in their own way) as the episodes go on: Agent Kallus (David Oyelowo), the Imperial agent working on Lothal; Maketh Tua (Kath Soucie), a representative of Lothal to the Empire (and a real "office drone" kind of character); and the deadly Grand Inquisitor (Jason Isaacs), a master of saber combat who proves to be more than just a threat to our heroes. Together this consistent band of villains give you a real sense of the dangers lurking for our heroes while also showing more personality than just about any villain on The Clone Wars. 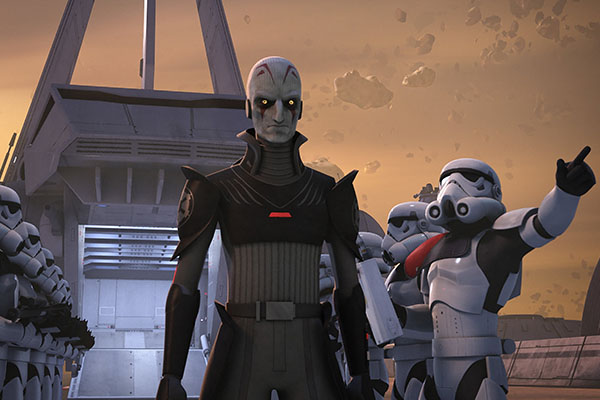 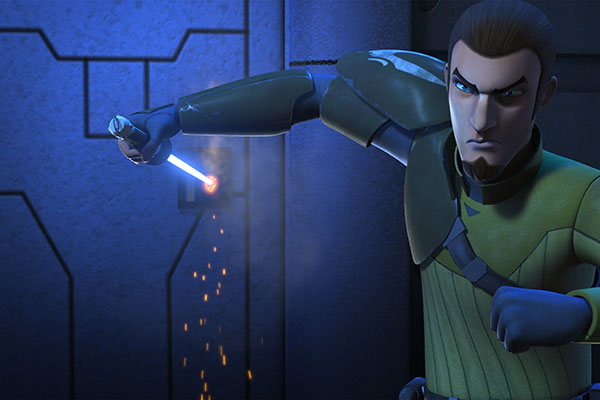 Really, though, the show benefits greatly by not focusing on characters we already know. What hobbled The Clone Wars more than anything was its insistence on telling us stories about characters whose fates were already sealed. here, tough, the cast of Rebels aren't tied up in any previously seen stories, lacking the baggage of existing characters. It may be a prequel but its just distant enough from the action we already know that it never feels like we're seeing something pointless or ineffective. Sure, these rebels won't bring down the Empire single-handed (that event is preordained), but they do illustrate what is going on in other parts of the world while heroes we might know go about business we've already seen.

A rebellion is more than just a couple of lead characters, it's a whole force working in various sectors. If the Empire really did fall at the end of Episode VI (a fact that Episode VII seems to fudge with the "First Order") then it would take rebels everywhere fighting the remnants of the old guard to make way for the new government. That's what I expect we'll see with Rebels and, right now with this first season, I'm getting the kinds of stories about the rise of the rebellion that I wanted to see.