As I noted in my reviews of season one and season two, it can be really hard to get into The Clone Wars. Not only is it a series focusing on a part of the Saga Far, Far Away that really wasn't calling out for exploration -- wasn't everything we needed to know about this time period covered in the movie that takes place after all this, Episode III: Revenge of the Sith? -- but it also features was truly wretched storytelling. This was likely a showed aimed at kids but it feels more like a "kids show" than a "show with kids as part of the audience." 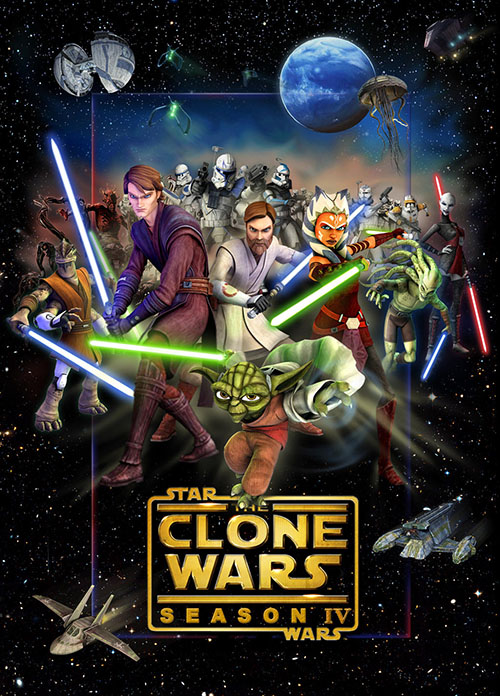 I get the desire to create something in the Star WarsThe modern blockbuster: it's a concept so commonplace now we don't even think about the fact that before the end of the 1970s, this kind of movie -- huge spectacles, big action, massive budgets -- wasn't really made. That all changed, though, with Star Wars, a series of films that were big on spectacle (and even bigger on profits). A hero's journey set against a sci-fi backdrop, nothing like this series had ever really been done before, and then Hollywood was never the same. universe that the younger set would want to watch. When this series launched, with the Clone Wars Film, the prequel trilogy had only been over for five years. There was an entire generation of kids that had grown up with the Prequels as "their trilogy", and while they were young I can see Lucasfilm seeing a good reason to put out a kids show aimed at this same audience. I just wish they could have made the show better in the first two seasons.

It's necessary to rehash some of these issues as the first half of the third season of the show has the same structural problems: a focus on storylines and characters that simply don't matter. Look, I get that Amidala has her fans, as do the droids, Anakin, Obi-Wan, Yoda, and the rest. But their stories are fixed in stone. Within a few short years those guys are all going to be caught up in the storyline of Episode III and put on a fixed path that, no matter how much bask-fill we get on their characters here won't really matter at all. Obi-Wan had a girlfriend in his past that was a Mandalorian? That's cool but unless the show actually lets him get together with her (which it hasn't yet) what does it really add? Who cares of Amidala pulls off some successful governmental mission to save this planet or that world? All of that work will be wiped away when the Emperor ascends, right?

That's part of why it's taken me so long to dig through the third season: I just had a hard time caring and I'd take weeks between episodes trying to muster the energy to watch another story or two. But then, right around the half-way mark of the season, something shifts. This shift is superficially marked by a change in Ashoka (one of the few characters on the show I genuinely like) as she gets a new outfit (ditching the cruddy tube top) and an additional lightsaber. Nothing in the show is said about this change but the shift mid-season also marks a shift in the stories the series tells. It starts to get darker, nastier, grungier, and you finally get a sense that the Clone War is an actual war.

Ashoka really is the secret weapon of this show. The thought of giving Anakin a padawan than never shows up in Episode III (no matter how much explaining away they'll end up doing in the later seasons) still seems silly, but the show invests heavily in her. In mediocre episodes, like "The Academy", Ashoka still manages to sell the storyline (and kick ass) as she struggles to teach a bunch of precocious kids. Following that we have "Assassin", which should nominally be a Padme episode (so I immediately didn't care), but then Ashoka tags along and livens everything up. Whenever Ashoka is on screen the show gets better. 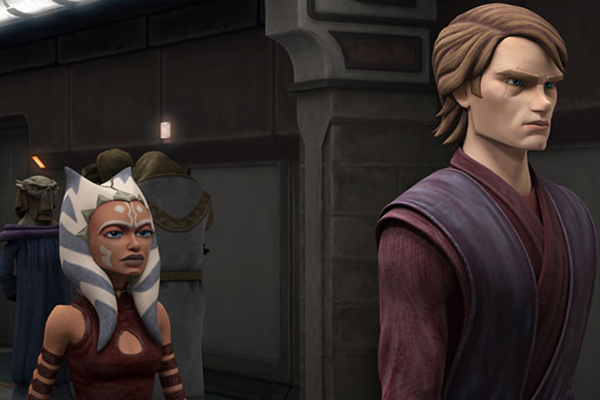 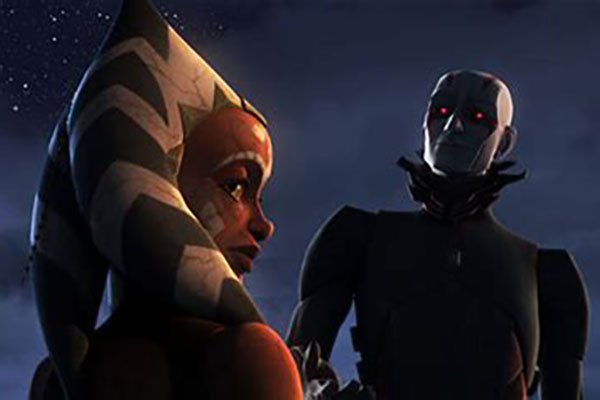 That's not the say that the later parts of season three are perfect; there are plenty of dud episodes: the droids-focused "Evil Plans", the Amidala tale "Pursuit of Peace," the long arc featuring Ventriss and "As Seen on TV" clone of Darth Maul, Savage Opress, in "Nightsisters" through "Witches of the Mist". None of these really feel like they add much to the show -- at least, not yet, in the case of Savage -- and they act more as fillers than really stales I could sink my teeth into.

The real turning point for me with this series, though, is the three episode arc with Anakin, Obi-Wan, and Ashoka on a mysterious planet overseen by three truly powerful force users: "Overlords", "Altar of Mortis", and "Mists of Mortis". In this trilogy of episodes we actually delve into Anakin as "the Chosen One", a storyline that I thought had been settled in movie lore already. What's interesting, though, is that this set of episodes tries to re-contextualize it, to give it meaning. In the process it also hints at what's to come from Anakin -- his actions for the Dark Side in Episode III, as well as turning into Darth Vader -- and I frankly thought it added some much needed darkness and fleshing out to the character. Anakin wasn't well served by Hayden Christensen but the cartoon goes a fair way to actually explaining his transition to darkness.

This arc is then followed by a two-parter were Ashoka is kidnapped and dropped onto a planet where she's hunted for sport, and those episodes were great (because Ashoka). Then, fourth season seems to backtrack on its progress at the start, kicking off with a absolute dud of a three parter set on Man Cala with the fish people, which is then followed by a Gungan episode (ugh, the Gungans) and then a two-parter focused, of all things, on the droids. Seriously, six episodes that I didn't need to be in the show at all because they add nothing to the story.

But cooler hands take over the show again after this when it launches into an absolute killer four-part series focused on the clones -- Fives, Rex, and the men -- having to deal with a different Jedi command, Krell, when Anakin is called back to the Jedi temple. This series gets positively dark as the clone troops are sent on one suicide mission after another by a seemingly antagonistic Jedi commander. The horrors of war are sold well here and the show stops feeling like "kids TV" during this arc. 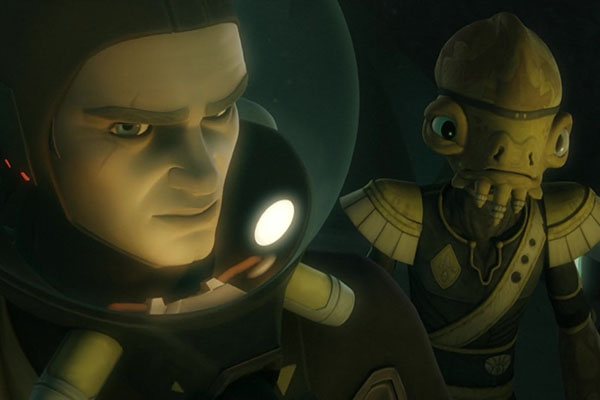 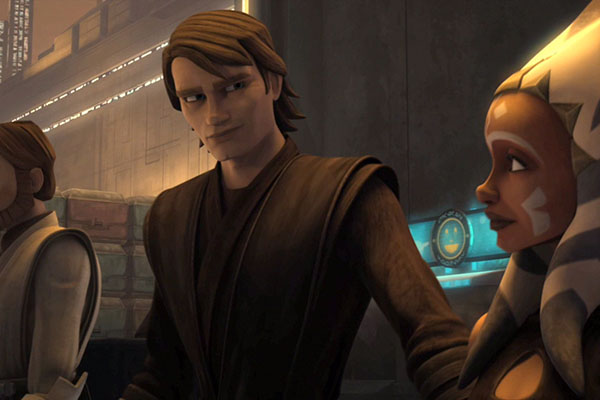 From here the back-half of season four continues this solid momentum: the three-part Zygerrian Slaver arc, a four-part tale about Obi-Wan faking his own death and going undercover as a bounty hunter, and then (and this was a real surprise to me) a solid four-part run that opens with Ventriss battling her former Master, Dooku, before sliding into a story of Savage coming back to his home-world (savaged by Dooku's men) and going on his own quest to find his brother, Maul. It's one solid arc into another with the storytelling actually having weight, real characters, and substance than matters. This was the show I needed.

I have to think that the producers of the show were watching what fans were saying and listened because the format changes so much over time. The episodes focusing on characters we know won't matter quietly go away while the new characters the show created come to the forefront, pushing parts of the Saga that we didn't get to see in the movies and actually justifying their inclusion in this series. If we had to have a midquel series focused on this conflict actually putting that focus on characters that can matter, who aren't tied up directly in Episode III, is the right call.

Before going into season three I still felt like Clone Wars was a failed idea, a series fleshed out from a set of tie-in shorts. By the end of season four, though, I had to admit that the show had me hooked and I was ready for the last three seasons of the show. I don't think the rest of the ride is going to be perfect (even season four had its stumbles), but as long as it can maintain a certain level of quality then I'm on-board with where the show is going. Clone Wars finally justified its own existence.