Can I Tell You About the Dark Side? 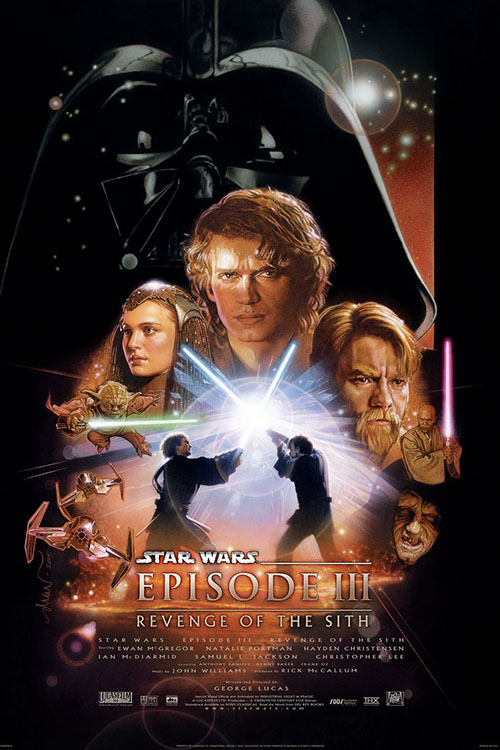 And, yes, the movie is pretty bad. I don't think it's as bad as Episode II which, for my money, is the weakest film of the set (and, thus, the weakest entry in the whole saga). The thing is, though, that having sat through a good smattering of the Clone Wars, I found that I didn't hate Episode III as much as I expected to. Because of developments in that film, I found I actually liked many more characters in this film (just by grace of getting to know them in that series) and that aided my overall enjoyment of the film. If The Clone Wars was meant to serve as a corrective for the prequel trilogy, I have to give credit to Lucasfilm: it worked.

We pick up the film sage right where the 2003 animated series ends: with the heroes about to board the flagship of the separatist fleet so they can rescue the Supreme Chancellor (who they don't yet realize is the evil Darth Sidious) and, just maybe, kill of Count Dooku and General Grievous and end the war. While they do end up getting Dooku (well, Anakin does while the Chancellor sits off to the side, smirking and egging him on to kill), Grievous gets away, prolonging the war. Soon, Obi-Wan is dispatched to track down Grievous and end that faction of the war while Anakin is promoted, by the Chancellor, to serve as his representative on the Jedi Council. The Jedi aren't happy as Anakin is still to headstrong, too ruled by his emotions, and they fear the connection he has to the Chancellor.

Of course, they were right to be worries as, soon enough, Sidious's plan comes to fruition. Outing himself as a Sith Lord, the Jedi are forced to respond and try to arrest (or kill) him. The Chancellor then uses this as an excuse to consolidate power and make the Republic into his Empire, in the process declaring all Jedi enemies of the state. The Clone soldiers are then commanded to turn on the Jedi, killing as many as they can. Anakin, siding with the Chancellor against the Jedi for... reasons, becomes his new Sith apprentice, Darth Vader. He then goes after Obi-Wan for a final confrontation between the two old friends that will leave one in exile and the other scarred, maimed, and forced to live in a suit of armor for the rest of his life. So, you know, a typical work day.

Taken on its own, Revenge of the Sith suffers from one of the biggest sins of literature (be they books, scripts, or the like): writing to an ending that's predetermined. Because the original trilogy of films had been out for years, and this prequel trilogy was set only a couple of decades beforehand, much of the timeline for these films was locked. We knew, by story's end here, that Anakin had to become Vader, that somehow the Chancellor had to take over the galaxy as its Emperor, that Vader had to have two children with Amidala, both of whom would be sent off to be raised without knowledge of who was their real father. The Jedis had to fall, the clones had to win, everything was set in stone, basically, because if it didn't, Episode IV wouldn't happen. So instead of trying to shade in the background, to find a way to make the proceedings interesting or to find nuance in the details, the script plods from point A to point B exactly as you'd expect. 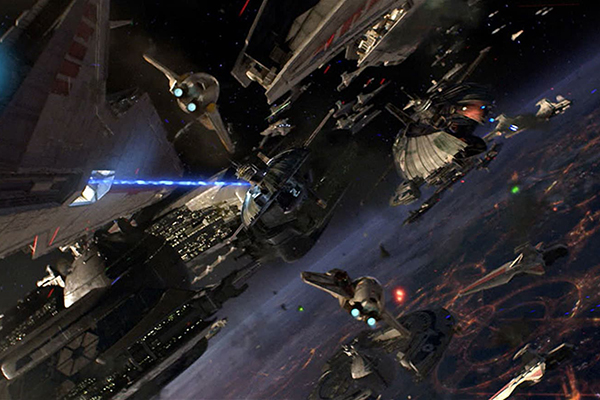 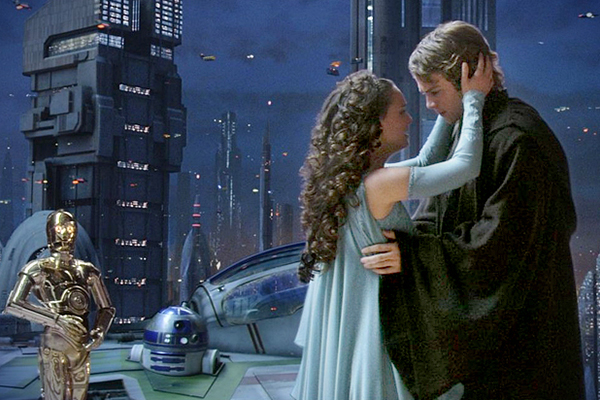 What this results in is a movie where you say to yourself, "this happens because that's the way it in in the next film." The Chancellor is attacked by the Jedi and lives, so he uses this to consolidate power, cast the Jedi from power, and make an Empire. If you know he does all this before A New Hope then sure, this had to happen. Except, the Jedi are the heroes of the Galaxy, the honorable soldiers every upstanding citizen trusts. If they went after the Chancellor, some people (beyond Senator Amidala) would probably stop and question who was really in the right or wrong. Instead, everyone in the Senate cheers as the Emperor declares himself the supreme ruler of everything (and basically makes the Senate obsolete). within the bounds of this movie that doesn't make sense; it only works if you're writing to an ending.

Similarly, we know that Anakin has to have a fall from grace and become an evil Sith Lord, Darth Vader. To get him there the film gives him self-fulfilling visions of the death of Amidala. So he talks to the Chancellor about it and, after two quick conversations, Anakin is suddenly like, "you know what? This clearly creepy old man is right. The Jedi are awful and I should join the Dark Side, the one thing I've literally sworn my whole life not to do. That just makes sense." He has a wife, and children on the way, and yet he betrays everything and doesn't even pass a glance after his kids, or his dead wife, once he gets encased in his iconic armor. It just doesn't work for the character.

Of course, nothing about Anakin works here, and that's entirely the fault of Hayden Christensen. Anyone that felt I might have been too harsh his wooden performance has to at least agree that this time around, given time, experience, and coaching, he should have been able to turn in a better performance. He doesn't, though, giving us the same wooden, whiny Anakin we had in Episode II. Anakin's fall, and how it precipitates the fall of the Republic, should be the focus of this film, the thing that brings it all together. Instead we have a vacant void at the center of our story and it leaves us wanting. The film can't gel together because the key performance just isn't there. It's doesn't matter how good Ewan MacGregor is as Obi-Wan or hoe much improved Natalie Portman is as Amidala, having gotten comfortable in her role; they aren't Anakin, and this is his story more than anyone else's.

Really, the film just can't recover without that core character. The politics in the movie are laughable -- killing one or two leaders of the Separatists won't end the war, not with so many sub-factions and multiple councils in play -- but then the politics in these movies have always been bad. Lucas simply couldn't write the kind of in-depth intrigue he clearly wanted so it's hard to invest in the story. If the core performance were better, that'd go a long way to gloss over the holes in the script, but Anakin is a mind-numbing bore, so that just can't happen. 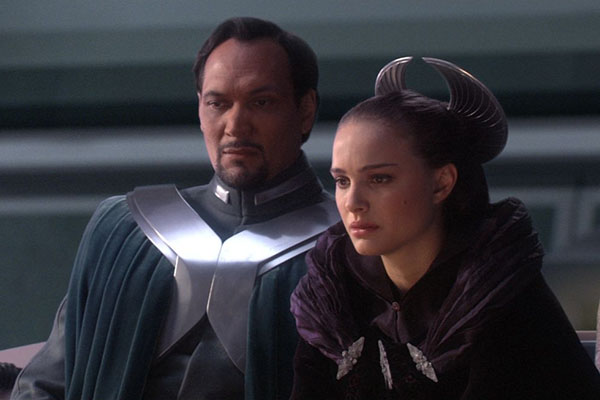 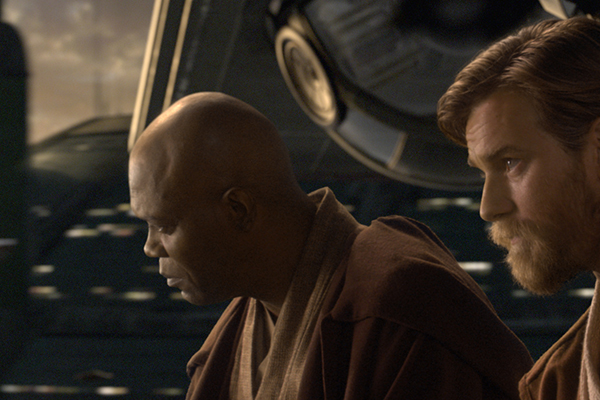 And yet, I found I did like more of this movie than I expected. Having seen the Jedi in the Clone Wars, I found I could now pick them out when they appeared, and I felt a connection to them. Dooku and Grievous, two villains utterly betrayed by this movie as they're given little screen time and both die like chumps, feel like more fully realized characters. Their justified ends in this movie don't feel like deaths that were tossed off for barely-seen characters that had outlived their usefulness, all because we'd gotten to see these characters repeatedly through The Clone Wars. Instead of Dooku being a guy that had show up at the end of the last movie just to die here at the start without any development, he had a whole, rich arc over in the series and it works.

Then there are the clone troopers. The first time I watched these movies, without having seen any of the extended media, I found it hard to invest in the clones; they were just CGI duplicates of one guy, deaths that didn't mean anything as they were mowed down by droids. Then they then betrayed a bunch of Jedi I hardly knew, it meant nothing. Now, though, I not only cared about the Jedi but I cared about a few of the clones I recognized. More importantly, though, because I learned that the clones are programmed (via a chip) to unwillingly turn on the Jedi, it colors their motivations. They can't help themselves, giving their whole history a tragic turn. Their story is redeemed even if they end up committing horrible acts against Jedi I actually rather liked. The Clone Wars helped to save much of this movie in ways I never expected.

All that being said, I still don't like the prequel trilogy. While I have designs to, at some point, go back and rewatch the whole of The Clone Wars, I doubt I'll go back and watch these films again. Anakin is the worst and for two solid films he drags things down. And when he's not betraying me, midi-chlorians are. All in all, I would have been perfectly happy with Disney pretending the prequel movies didn't exist. I think that'd be for the best.

So Anakin and Amidala are married, secretly, and throughout The Clone Wars we see them keeping their relationship a secret from everyone. Then, late in this film, Obi-Wan wanders over to Amidala's pad and asks if she's seen Anakin, because obviously the two are together and it's not a secret anymore. Really? The Jedi aren't supposed to marry or have emotional connections, and yet Obi-Wan is like, "whatever, man, so you banged and have children. NBD."

Speaking of things that don't make sense, the Jedi Council is caught off guard when the Supreme Chancellor is outed as a Dark Sith. They're total surprised having absolutely no idea this guy had evil intentions. You know, the evil intentions he made clear in clandestine meetings in his office. This same office that the Jedi have a camera in, and have had a camera in since, basically forever, so when Obi-Wan goes into the archives later to find out what happened to Anakin, he boots up a feed of that office and sees Anakin pledge his loyalty to the evil Emperor. Did no one think to keep an eye on the Chancellor this whole time? 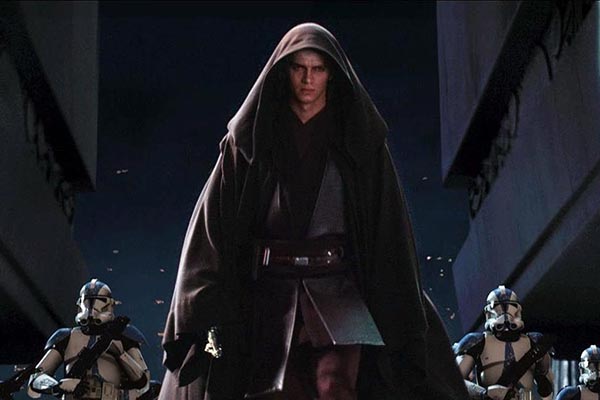 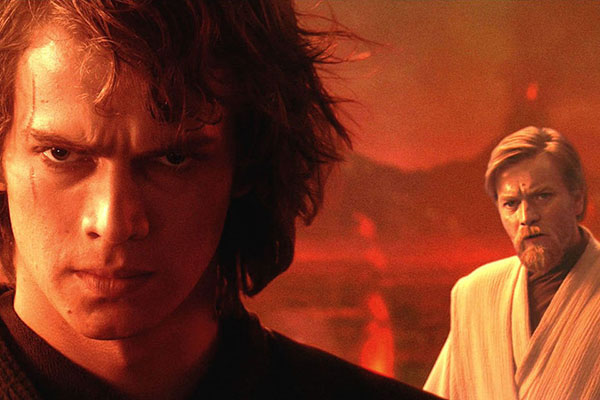 By that same logic, when the Emperor was consolidating power and making an Empire, shouldn't a representative for the Jedi (like maybe Senator Amidala) have presented evidence they clearly had this whole time showing the Chancellor was Darth Sidious? Wouldn't that have prevented his power grab? Again, the politics in these movies are stupid.

But hey, we at least get a cameo from Commander Cody, who we saw a lot of back in the animated series. That made me happy.