Was it necessary to revisit the Clone Wars, the great battle between the Republic and the Separatists? Well, if you asked any fanboy from before Episode I: the Phantom Menace, the Clone Wars was a saga large enough to warrant its own trilogy in the grand Star WarsThe modern blockbuster: it's a concept so commonplace now we don't even think about the fact that before the end of the 1970s, this kind of movie -- huge spectacles, big action, massive budgets -- wasn't really made. That all changed, though, with Star Wars, a series of films that were big on spectacle (and even bigger on profits). A hero's journey set against a sci-fi backdrop, nothing like this series had ever really been done before, and then Hollywood was never the same. Saga (and if you talked to them about Star Wars after Episode I came out, you probably would have gotten a lot of incoherent screaming and horrified gurgling). The Clone Wars was a major moment in the history of the saga, a war that was mentioned in hushed tones in the Extended Universe media. It was the historical moment many fans were waiting to see on screen. 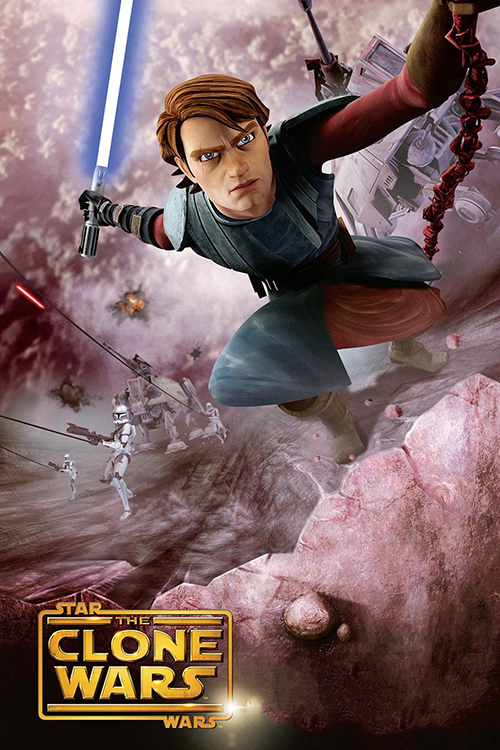 And then the movies largely ignored the war. Episode II: Attack of the Clones setup the war but didn't really take place at all during it, and Episode III: Revenge of the Sith takes place right near the end of the war. The big Clone Wars saga itself happened off-screen, in an animated series barely anyone watched. And, even then it's hard to argue that the first attempt at adapting Clone Wars was an unbridled success. Two hours of shorts to cover one of the grandest wars a Galaxy Far Far Away had ever seen? Really?

It was all but inevitable that Lucasfilm would go back and revisit the Clone Wars. There was so much story there that had barely been covered, it was just begging for further adaptation. Thus, in 2008, a new version of The Clone Wars arrived, first on the Silver Screen with a movie (that essentially serves as a pilot episode) and then on the Boob Tube later that year. And, gotta say, from the first look provided by the launch movie, maybe we were better off with just the 2003 version of Clone Wars.

Like the cartoon series that preceded it, The Clone Wars tucks into a nebulous place in the film continuity. Because the movie (and its following series) had to lead into Episode III, none of the major characters used in this film could really come to any harm -- Anakin, Obi-Wan, Yoda, Mace Windu, and all the rest of the popular Jedis were safe because we already know they show up later in the continuity. To get around that the film introduces a few new characters, like clones soldiers and incidental side characters related to the main storylines. The most prominent new character, those, is Ahsoka, Anakin's new padawan trainee. Ahsoka is sent to Anakin and Obi-Wan at the start of the film and she's the driving force not only for the action but also any of the thrills derived -- will she survive or is she just another Jedi for the slaughter?

Many critics at the time found it difficult to care about Ahsoka. Since she doesn't appear at all in Episode III they theorized that she had to die at some point in The Clone Wars -- if she didn't, why wasn't she already in the movie? It's a fair question to ask, and it's certainly something the animated film doesn't bother to address at all. Ahsoka, like so many other characters introduced here, is thrust upon on with the expectation that we'll like her just because. Of course, now we know that she does in fact survive the series (since she shows up in the much-later-set Rebels down the road), so I found myself actually investing in her character simply because I knew she was in for the long haul. Sure, she might not show up in the movies, but in the current Extended Universe she remains a prominent character. 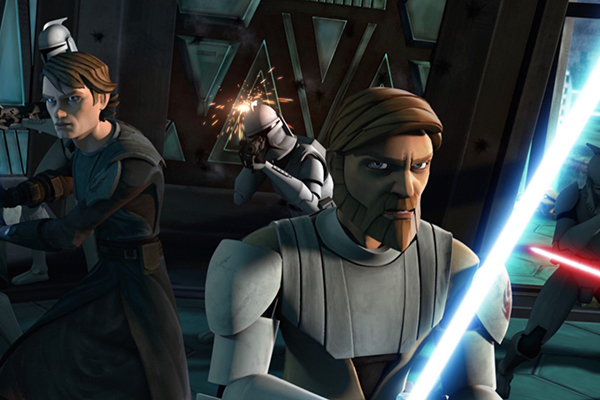 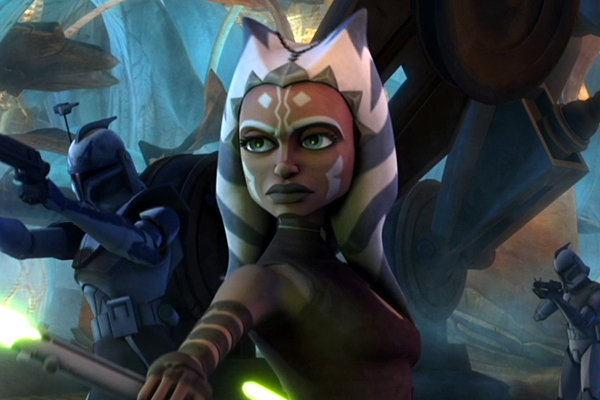 That doesn't make her that interesting here, though. In her first appearance in the series, Ahsoka is a precocious child, a youngling suddenly promoted to padawan and thrust upon Anakin. Anakin is already a problematic character, annoying in the other movies and pretty abrasive here. Saddling him with an annoying kid sidekick isn't the best way to get us to care about Anakin especially when, by the time this was released, everyone had to know Anakin turns bad and becomes the evil Darth Vader. Its not as if giving Anakin a child-trainee is going to prevent him from turning to the Dark Side; she's just thrown in as a plot device, a way to give us someone new to watch without having to worry about connections to the larger story.

Hell, I'd argue that focusing The Clone Wars on Anakin and Obi-Wan at all makes for a weaker story in general because we already know where Anakin and Obi-Wan end up. This is a midquel to a prequel, a twisted up entry in the series so beholden to everything else that it'd struggle to have any consequence on the larger story even under the best of circumstances. Giving us Ahsoka, in the long runs, allows us to have someone else to invest in, someone to focus on so we can ignore the characters that are already set in stone. We don't need to learn that much more about Obi-Wan and Anakin since we know their major character development is going to come in Episode III (and it already had by the time this film was released).

But if you're coming to this film fresh, without having seen everything that comes after, just watching the whole series in chronological order for the first time, then this film might actually play better than it did for me, a hardened sci-fi fan that's already seen everything else. Even with the previous cartoon series taken into account, this film tucks nicely in and gives us some more development on characters we're still struggling to understand. Anakin is a jerk, but Ahsoka softens him a little (which I could see making his eventual turn to the Dark Side sting that much more). Obi-Wan and Anakin (and Ahsoka) have some pretty good banter, allowing us to bond with all three of them and care about where they might be headed. In its own way the film helps the series by giving us more time to learn and care about characters that, really, hadn't been treated all that well by the previous films.

If anything, I could see new fans being upset if they watched this film before getting to Episode III. A new character they were just introduced to, Ahsoka, is nowhere to be seen, and while there's plenty of action for Obi-Wan and Anakin, the third side of their dynamic is conspicuously missing. That could really piss off some new fans if they were doing the entire saga in order. 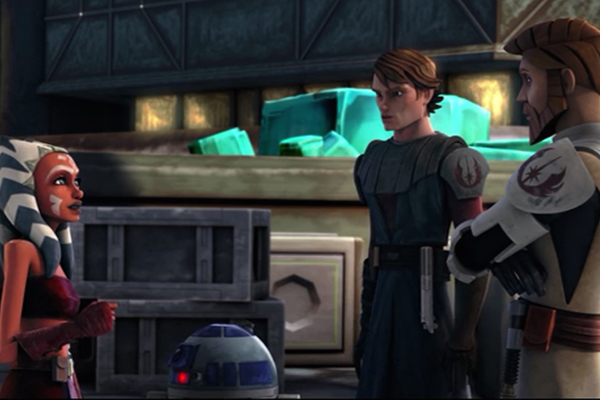 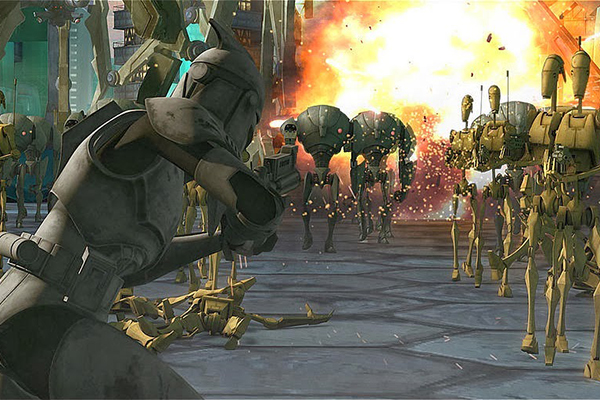 Would anyone do that outside of a project like this one for Asteroid G, though? How many people are out there clamoring to do the entire saga, start to finish, in chronological order. Certainly after watching this film I struggle at the thought of watching any of The Clone Wars TV show (even though I know it gets better in its later seasons). This movie, which amusing in places, isn't exactly a winner. Its pacing is slow, its jokes kind of hacky, and its overall story feels slight. It was meant to launch a TV show, sure, but as a pilot it fails to grab the attention of the view and make a compelling argument for continued watching. It's certainly not the worst Star Wars film you'll ever see (thank you Episode I for setting the bar so low), but it's not really great either.

I suppose I'll have to hold judgment on the whole of The Clone Wars until I've dipped my toes into the rest of the TV show. Right now, though, this starting film feels even less essential than the 2003 series that preceded it (and that shows wasn't all that essential, however pretty it may have been). hard to see how it can get much better from here.

So this is the first Star Wars film I've seen with the WB logo in front of it than the Fox logo. I assume Fox passed on releasing this film (and the subsequent series), but it's still odd. Also, on the subject of things that aren't quite right, the intro music for this film isn't quite right, either. It feels like off-brand Star Wars despite being made by Lucasfilm.

At least as far as this movie is concerned, very little actually directly conflicts with the 2003 animated series that came before. Sure, Ahsoka doesn't show up in the previous iteration, but maybe she's off doing other stuff for the times we see Anakin and Obi-Wan. Certainly Ahsoka had to be elsewhere for the entirety of Episode III since she was added to continuity after the fact, so if she can exist and not be seen there, it stands to reason the same is true of the 2003 series. I guess we'll see when I do an overview of the 2008 series if anything there stands in direct conflict with what we've seen so far.

Also worth noting that none of the named characters in this film (other than Yoda) resemble their live-action counterparts. It's a curious choice since I assume Lucasarts has the likeness rights to all the actors locked down (so they can make toys, games, and other media based on the saga). I wonder if they somehow couldn't get the likeness rights for the actors for the prequel trilogy or if this was a conscious decision to differentiate this movie (and series) from the films that came before. "Look, we know the prequels sucked, but while this tucks between them it's not really part of them."