The Blue Bomber Gets an Upgrade

It's hard to describe the feeling when Capcom announced Mega Man X. Kids of the 1980s had already seen plenty of Mega ManIn 1987, Capcom released Mega Man on the NES, a game featuring a blue robot that fought other robots and took their powers (so that he could then fight other robots with those powers, and on, and on). The series went on to release over 50 games in 30 years and become one of the most famous gaming franchises in the world. games in a very short time (all the ones for the NES plus the Game Boy iterations), so the thought among many kids was, "oh, it's just another Blue Bomber game, but on the SNES." Of course, once we got to see what Capcom was doing with the game, many of us felt like it was the first true evolution of the series (considering how many of the classic games did the same old thing over and over again). 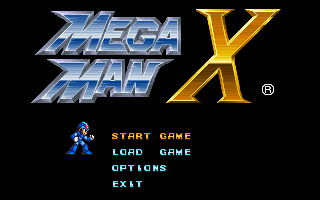 Of course, Capcom being Capcom, they quickly took the Mega Man X series and ran it as hard into the ground as the classic Blue Bomber series -- they were nothing if not whores for constant releases. But in this first release we finally had a game that felt truly revelatory. This was the direction Mega Man would take in the future and the series would never be the same. We were wrong (and not just because Mega Man 7 would come out and be just more of the same classic games on a new system), we just didn't know it yet.

It's the future, even from the classic series, and after a time of peace (after Dr. Wily was finally defeated), a new threat has emerged: Mavericks. These are robots with full artificial intelligence that have gone off on their own, seeking to take over the world for robot-kind. They're led by a true evil reploid (the game's names for all robots), Sigma, who would love nothing more than to wipe all of humanity off the Earth. If only there were a hero to battle the Mavericks.

And, wouldn't you know it, there were. Dr. Light's last creation, a new version of Mega Man dubbed "X", was sealed away in a capsule, with Dr. Light hoping he'd never have to be used. A new scientist, Dr. Cain, found X and studying the dormant bot, created the whole line of Reploids (replicant androids). But when the reploids revolted, Cain booted Mega Man X up. This set the new Blue Bomber on a quest to find Sigma, and all the robots he was controlling, and stopping them and their plans once and for all (or, at least, for a time).

The basic concept of Mega Man X is a lot it's NES brethren: after an intro stage X will be taken to a stage select menu where he'll have a set of eight elementally-aligned robots to defeat. These robots are named after animals -- Chill Penguin, Flame Mammoth, Armored Armadillo, etc. -- instead of "??? Man", but otherwise they still function the same. Defeating one of these eight robots grants X their power which he can then use in the next stage, and so on and so forth. Defeating all the robots unlocks the final set of stages where X can take on Sigma, this game's Wily replacement. 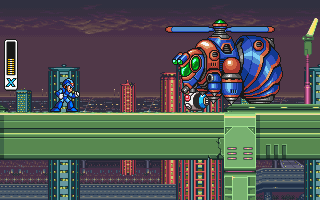 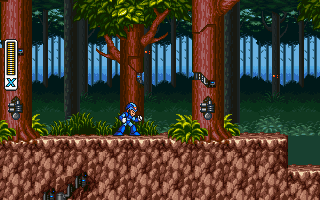 But while the basics of the game were the same, there was a lot to set this SNES title apart from all the NES games that came before in the series. For starters, as you'd expect, the game was much prettier. The SNES could produce some lovely graphics, full of lush colors and brightness, and this game used the power of the hardware to good effect. This is one of the more attractive looking games on the SNES, with bright details and solid pop to the graphics. It's a stunner to watch, over and over again.

The music, too, was pretty great in the game. There were a number of tracks that really stood out... well, frankly, all of them. The boss music in this game is good, along with the fortress music, and it's hard to pick out even a single favorite. Along with solidly constructed tunes, the game used the hardware to give everything a solid hard rock-synth feel. It's different from the NES classic entries but no less good (and, at least in this first game, I'd call the music an improvement over all).

Of course, what players remember most about the game is its upgrade system. In the classic series Mega Man would always start off with a basic set of abilities -- run, jump, fire, and then maybe slide or charge up his buster -- but this game featured a set of Dr. Light capsules to find that would unlock new abilities. The dash is the first thing people would normally get, and it had its uses, but then there was the weapon upgrade that allowed you to charge your buster even further, and charge boss weapons. Plus you could collect extra health expansions and reusable health canisters. There was a lot to do and, over time, it made X feel more and more like a force to be reckoned with.

That said, the collecting aspect of the game wasn't without its downside. I'm not for collect-a-thon games, titles where the whole point of playing the game is to collect items so you can then venture deeper and collect more items, on and on. That kind of game play wears after a while. It's not so bad here, with most stages only having two upgrades to collect, but it's still an essential aspect of the game. If you want to be able to clear the game most efficiently you have to collect everything. 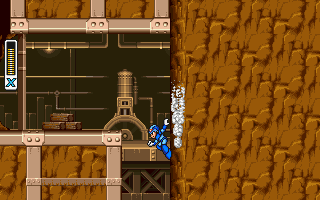 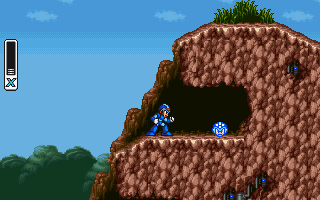 This feeds into the level layouts sometimes, too. Some stages are solid, lengthy constructions with a lot to do as you run the gauntlet to the end of the stage -- Launch Octopus and Sting Chameleon both have solid stages with a lot to do. Other stages, though, feel like they're just there to funnel you to the items, where if you ignore everything and blast to the end there's barely any stage at all. Flame Mammoth's stage is too short and has this issue, as does Armored Armadillo. The classic, lengthy gauntlets from the classic series aren't as prevalent here at all.

Maybe this was a limitation from the hardware, that longer stages with the prettier graphics and better sound would have been harder to fit into the cartridge or run on the hardware (the later X games on the PlayStation simply split stages in two to avoid this issue). Or perhaps Capcom was just lazier here, or struggling with the hardware. Whatever the case, an essential part of the experience was muted in the X games.

This game, too, has the issue that so many classic Mega Man titles had: the final stages feel like an afterthought. The first stage of "Sigma Castle" is actually pretty decent, lengthy and with solid challenges. But then the game stops putting real levels together, instead just stringing boss rooms together (this game follows the path of the original Mega Man, building the refights into the stages instead of having room of boss capsules at the end). The end game isn't super short but it doesn't feel varied, either.

And, frankly, for a major villain, Sigma isn't much of anything. His boss fight is interesting, don't get me wrong, but in comparison to Wily, of the floating ships, skull castles, and waggling eyebrows, Sigma is hardly as iconic. If we spent more time battling the villain over the course of the game (a position held for a lieutenant of his, Vile), more time working against his as he showed up to steal our victories from us, he could be a really solid villain. Here he just doesn't impress. 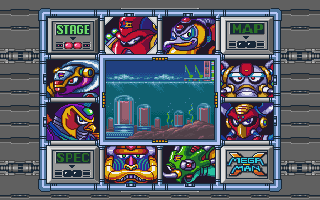 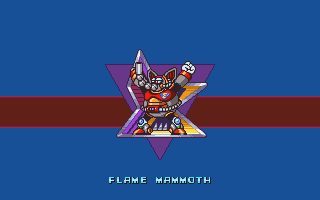 Better is Zero, a red-armored hero in the vein of Protoman. Zero has swagger, fighting enemies with his beamsaber while he lectures X on how to be a real hero. Zero steals the show in this game, it's just a pity we don't get to spend more time as the hero (or even play as him) in this title (his time would come, mind you). Everyone likes Zero and there's no question why: Zero is a bad ass.

When it came out I loved Mega Man X -- it was a breath of fresh air from the staid classic series, something willing to try new things and beat a (slightly) different path. I'm sure I view this game much the same way that kids growing up with the Battle Network series -- it was new and different with just enough of the past still baked in. But over the years, as a number of sequels came out doing the same thing as this game, just again and again, this original title stopped feeling quite so fresh.

I still enjoy it, and it was still the first game in the whole series I ever beat (without any kind of cheating). This game will always hold a special place in my heart. At the same time, though, I don't think it's quite the classic anymore. It's good but not quite great. Like the classic series it would have an entry that would be even better, that would improve the formula... right before the series would iterate itself to death. 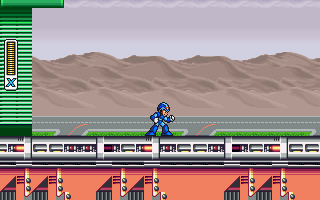 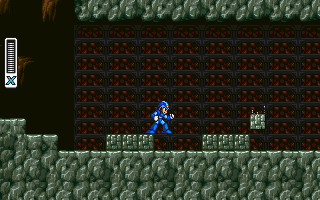