Mega Man and Bass: Challenger from the Future

The first Mega Man and Bass game, the semi-sequel/semi-retelling of Mega Man 8, never felt essential. It's a good game, mind you, but between the fact that it didn't come to the West until years after its original release, and originally appeared on the SNES after the series had already moved on to the PlayStation, made the game feel like an afterthought. Good, sure, but not anything to write home about. 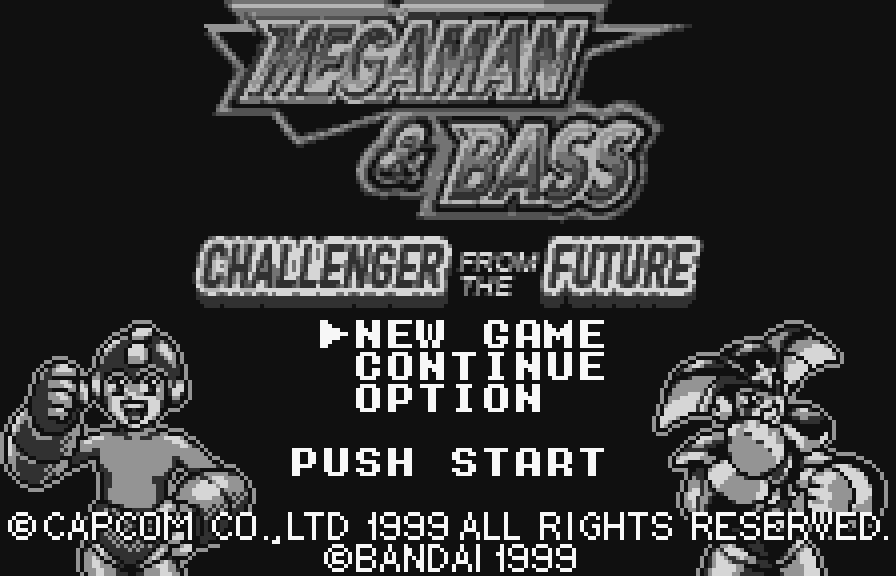 It's surprising, then, that the game received it's own little sequel on the Bandai WonderSwan a year after the SNES game came out. It's a sequel that tries to conform to the standard set by the SNES title but, really, has more in common with the Game Boy Mega ManIn 1987, Capcom released Mega Man on the NES, a game featuring a blue robot that fought other robots and took their powers (so that he could then fight other robots with those powers, and on, and on). The series went on to release over 50 games in 30 years and become one of the most famous gaming franchises in the world. games than its SNES progenitor. And yet, this game is essentially the last original Mega Man fans would get until the release of Mega Man 9 nine years later, the longest gap between original Blue Bomber titles in the series's history up to that point.

That puts Mega Man and Bass: Challenger from the Future (Japanese title of Rockman and Forte: Mirai Kara no Chosensha) in a weird place of both just being a silly little hand-held port of the series and the last official game for nearly a decade (and it's not even really an official game as it's a licensed title developed by Bandai with Capcom's blessing). As far as being a doofy little port of the franchise, Challenger holds up, but under the weight of the series legacy, making this the last title to come out for a while, this game just can't really hold the weight.

Being a semi-sequel to Mega Man and Bass, this game resembles that SNES title. The graphics and sound were designed to mimic that title, from the nicely detailed, chunky sprites of the heroes and enemies to the arranged songs on the soundtrack, many of which originated in the SNES game. The game even uses a similar level selection screen to the SNES, trying as hard as it can to resemble a proper sequel in all respects. Considering the relative power of the WonderSwan (one of a number of also-rans that were all steamrollered by the Game Boy over the years), it is impressive how good the game looks and sounds. Despite it seeming like a shovelware crap third-party port, a lot of care and attention to detail seemingly went into Challenger from the Future.

The fact that this game tries as hard as it can to resemble to SNES title it came from despite the plinky sound chip and black and white graphics actually feels a little weird. I was expecting a 8-bit styled game, something along the lines of the Mega Man titles for the Game Boy (and the ports of Mega Man: The Power Battle and Mega Man 2: The Power Fighters for the Neo Geo Pocket Color). This game doesn't really feel like a Mega Man title even if it does a good job of copying the style of Mega Man and Bass. Something is off about it even if it looks good all the same.

When in play the game also feels off, and its while the game is running that the whole package starts to feel a little thin. For starters there's only eight stages in total for the game, making this the shortest title in the series by a fair margin. There's an intro stage, four main stages, and then three follow up stages, none of which really feel like a proper Wily Castle-style dungeon. On top of that there are only six Robot Masters to fight and one five of them give weapons, making this the smallest mix of items Mega Man has ever had access to (including the previous winner, the first Mega Man game).

Inside stages, things don't really improves. Most of the stages are comprised of the same background tiles, repeated throughout the game with only mild variation. The enemies, too, are reused constantly, and all this repetitiveness seems so strange considering that there game is only eight stages -- so many assets are reused for so few stages when you'd think they could have just made a few extra assets for the few stages provided.

Strange still is that even within this game there are some gimmicks implemented but in a half-assed way. As noted, this game uses the same menu system as Mega Man and Bass in style but not in substance. In the original SNES game, the menu setup tiered stages where a starting set of three would slowly unlock a second tier of stages for the player to explore, making the level selection much more dynamic. Challenger from the Future, though, puts all four of the main boss stages immediately after the intro stage. Then beating all of those unlocks the next stage, and that the next, and so on. It's a much more linear layout that feels more like the classic NES and Game Boy games than the dynamic menu of MM&B.

Then there's the fact that the WonderSwan system had a long screen (instead of the boxy screen of the Game Boy) which meant some games could be rotated and played along their long side. Challenger uses this for the Aircon Man stage, giving the stage a tight, tall layout. You'd think this would be a precursor to the game making another tall stage later in the game, but no, it doesn't. There's just one stage that tells you to rotate the screen and then it's never used again. What's even the point of that? 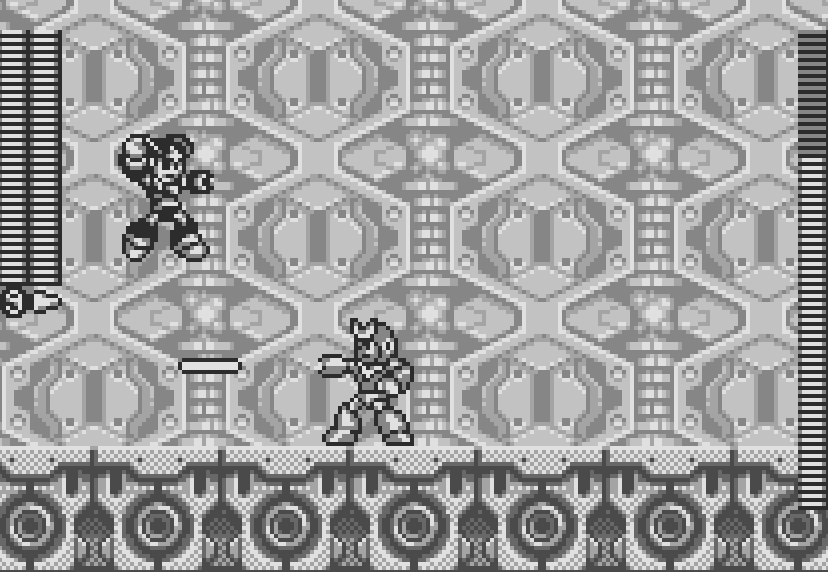 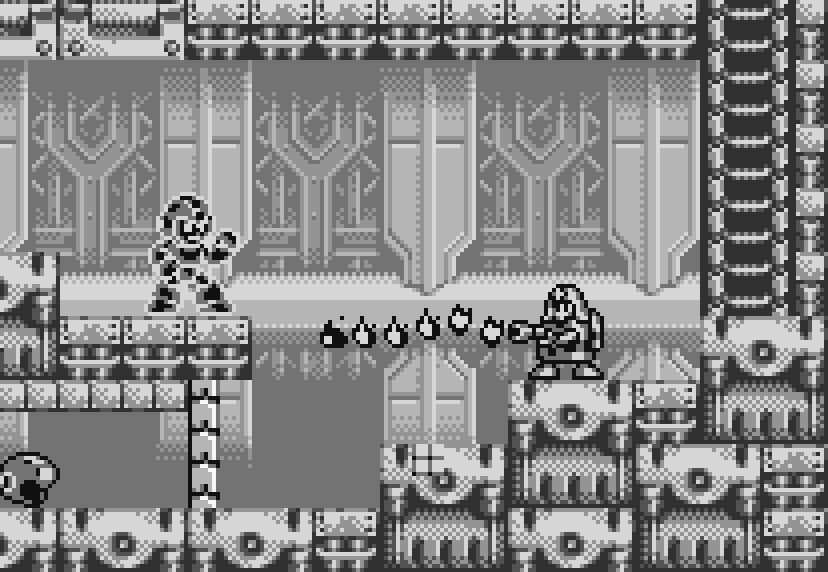 It's clear this game was just thrown together once Bandai caught the license. Everything here feels slap-dash and half-implemented. Take the bosses, which should be the main draw of the game. The Mega Man series is known for its big, colorful bosses, so clearly this game needed them as well. And yet, not only are the six Robot Masters included a pretty sorry looking bunch, all the bosses in the game are stupidly easy to defeat. They all basically have the same pattern -- shoot at the hero, then fly up to the middle-top, attack, then fly to the other side -- and none of them have invincibility frames. Plus, every Robot Master weapon has a fixed amount of damage it deals with each ammo charge. This means you can use any weapon you want against any enemy and just spam it to absolutely rip through bosses.

That is if you even feel the need to use special weapons (which, mind you, do not get weapon refills between stages). This game was clearly designed with Mega Man in mind, something challenging for the Blue Bomber to chew through. Bass, though, completely breaks the game, not just because of his double-jump which allows you to basically ignore every deadly jump in the game, but also because he can multi-direction shoot and rapid fire his shots. Killing Robot Masters with Bass is a brainless affair. He's easy mode, destroying any kind of difficulty this game could have.

And yet, despite all these flaws, it doesn't feel fair to rate this game at the same level as a proper entry in the series. As much as we might want to think of this as a full-fledged "Mega Man and Bass 2", it's just a little portable port of the series. It may have new bosses but it's not really designed to be treated like a full entry in the series. It's a short game meant for the road, presented in chunky black and white graphics. If Mega Man 9 had come out any time earlier than a decade later, I doubt anyone would even remember Challenger from the Future even existed.

As a portable title, Mega Man and Bass: Challenger from the Future is actually pretty fun. It's flawed, sure, but it's still enjoyable enough to blast through as Bass and wreck face. Just don't expect a full game from this tiny package -- this semi-sequel just can't stand up to those kinds of expectations. 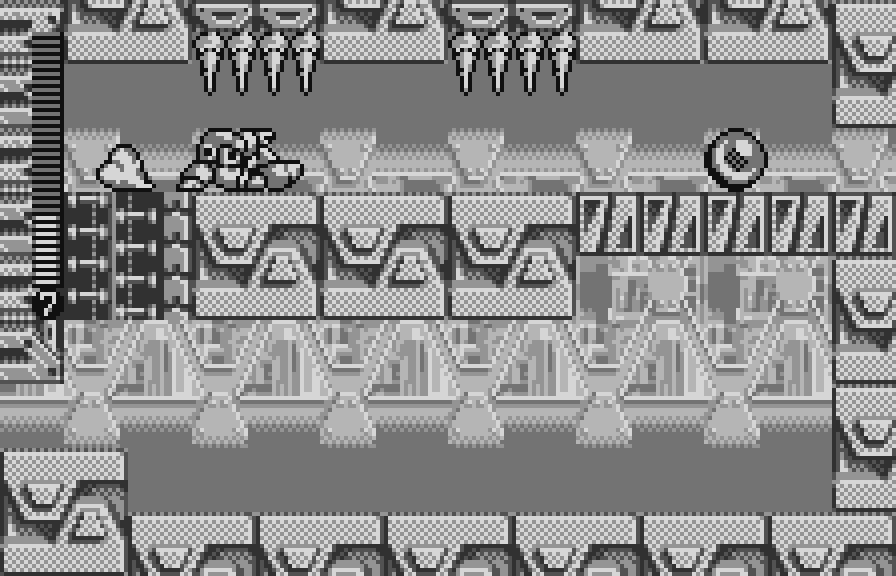 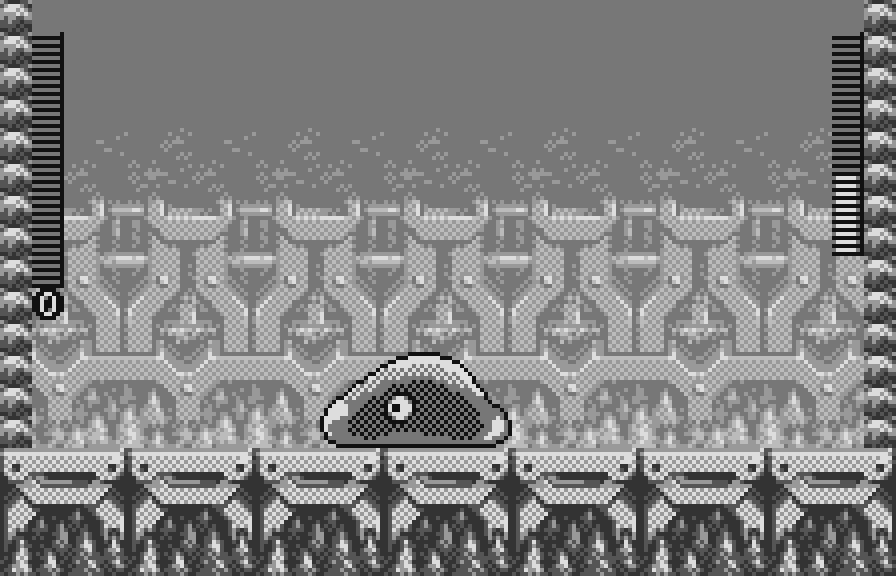 Although the shop returns in this game, only a small handful of the items are persistent -- everything is one-time use only. We've covered the persistent utilities here: