The Bosses Are Back and Ready for Action

I'm fairly certain no one was really hankering for a Mega ManIn 1987, Capcom released Mega Man on the NES, a game featuring a blue robot that fought other robots and took their powers (so that he could then fight other robots with those powers, and on, and on). The series went on to release over 50 games in 30 years and become one of the most famous gaming franchises in the world.-themed fighting game, certainly not one like Mega Man: The Power Battles. That game is an oddity, a Mega Man title that strips out all the platforming to focus solely on the boss battles. I mean, it's not a bad idea in theory since the series has featured plenty of large, colorful bosses full of personality (even if, up until Mega Man 8 the Robot Masters never actually talked). Transplanting them into a fighting game made sense in the abstract, but that game was flawed, feeling like little more than an overly-difficult boss rush. 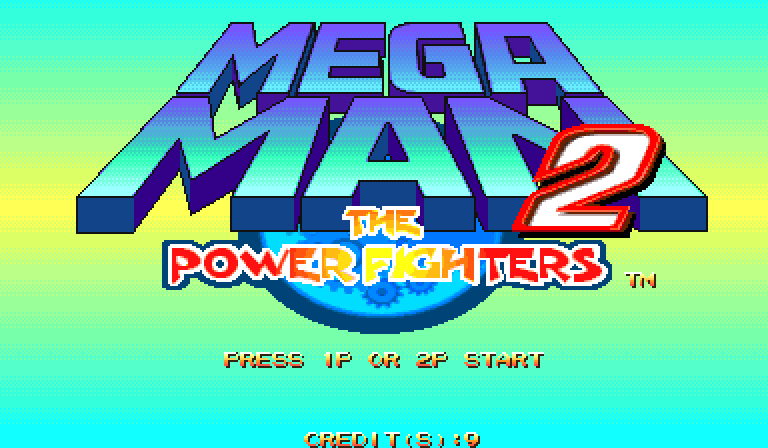 It was popular enough to warrant a sequel, so a year later a sequel, Mega Man 2: The Power Fighters, came out in arcades. And, yes, it basically the same game we received before just with some new bosses to fight and new power-ups to collect. That's both it's blessing and its curse since the game (in the best traditions of Capcom's Mega Man mill, grinding out samey-sequels year-after-year) does little to push the boundaries of what came before. And yet, at the same time, it includes just enough improvements it's almost able to overcome the flaws of its predecessor to become an interesting little battler.

In The Power Fighters, Wily is, of course, back with an army of 18 Robot Masters to battle Mega Man while the mad doctor tries to take over the world. The previous game was broken into three tracks, each with their own selection of six Robot Masters, and the sequel does the same thing. This time, though, instead of breaking it down into grouping of bosses from specific eras, the game sets up three different plot lines for Mega (or Protoman, Bass, or new character Duo) to follow:

Each of these tracks them leads to the same basic fight with Wily at the end. Anyone that has played the previous game will appreciate the slight nod towards story, but overall the game is basically the same as what came before. 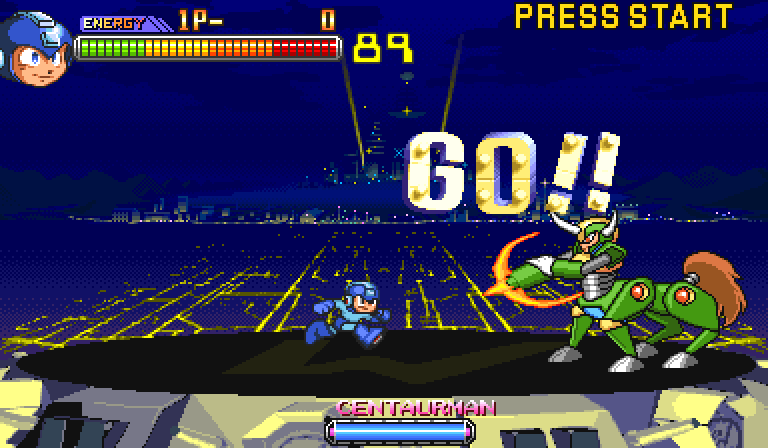 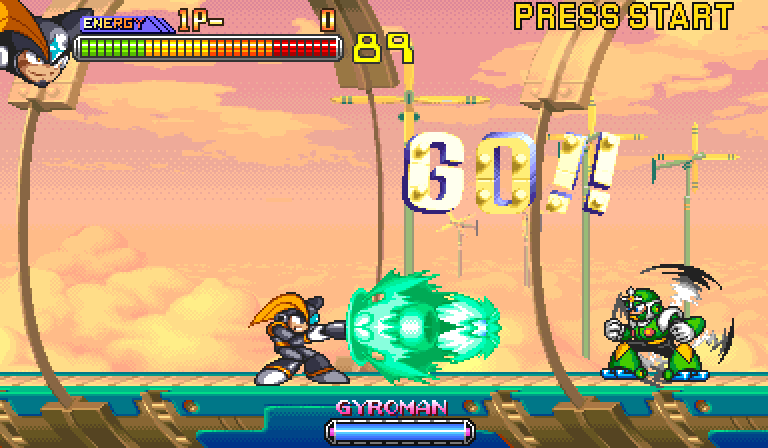 Hurting the game further is the fact that nearly half the bosses in the game were already featured in the first Power Battle title. The first game had 18 bosses in it out of a total 54 Robot Masters in the various games. Despite the fact that there were still 36 bosses the sequel could have featured (not counting any new ones from Mega Man 8), and still had another 18 left over for a third game, A bunch of bosses were reused. Did we really need to see Cut Man, Guts Man, Heat Man, Gemini Man, Gyro Man, Napalm Man, Plant Man, Slash man, or Shade Man again (let alone the Yellow Devil as well)? reusing so many bosses made this game feel like a cheap grind out, a cash-in to quickly capitalize on the success of the first arcade title without putting in any effort.

Of course, there's also the fact that this game came out after Mega Man 8 was released and yet it still uses assets from Mega Man 7. Certainly I appreciate that half the bosses are new to the game and were redraw to match that series, and I also appreciate that Duo (who was introduced in MM8) is redone to match the style of the rest of the fighters. At the same time, though, a clear delineation was made in the series to indicate we were moving on with the art style again. To almost immediately go back to the SNES style (a style I do like, mind you) seems odd. It again reinforces the idea that this was a cheap title to crank out rather than one Capcom actually cared about. "We have an engine, and assets already designed, so go make a sequel ASAP.

As I noted above, though, the game does make a few improvements I actually do like. For starters, the Robot Master weapons actually feel like they have a purpose. Instead of just ineffectually bouncing off the Robot Masters as they didn't in the first Power Battles title, doing as much damage (or less) than Mega Man's normal buster, the weapons this time actually do decent damage to the bad guys. If you find the right weakness you can chow through a good amount of their health and, in the process, stun them. In some cases you can actually trap bosses in A.I. loops, making the use of their weapons absolutely essential. That said, once you get deep enough in the game, and the enemies get much longer health bars, the special weapons still won't completely wipe out the enemies on their own; you'll still have to use the Mega Buster some of the time. At least this way, though, there's strategy to it, managing the special weapons to get knock back and stop massive attacks.

The various fighters have also seen their own upgrades. Each now has their own special attack, from a special uppercut Mega Man can perform, to a massive should strike from Duo, that makes playing as each of them a bit different. They can each get their own special Dr. Light upgrade during boss fights, allowing Mega Man and Bass to summon Rush/Forte (respectively) to help them for a limited time in the fight while Protoman and Duo gain a protective shield courtesy of Beat. This makes each character their own fighter and not just differently skinned versions of the others. 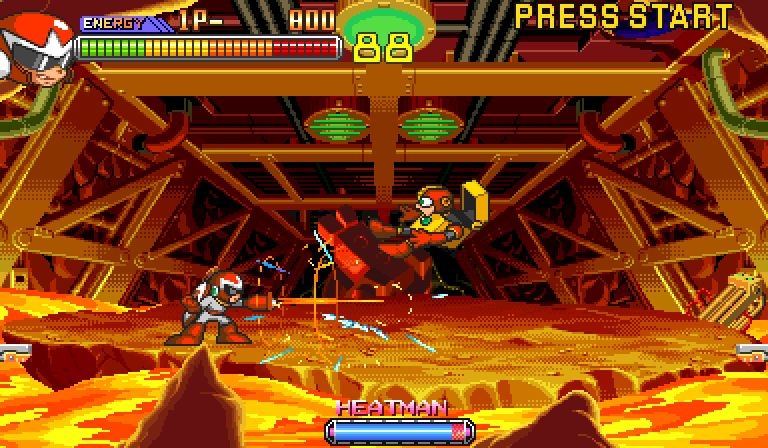 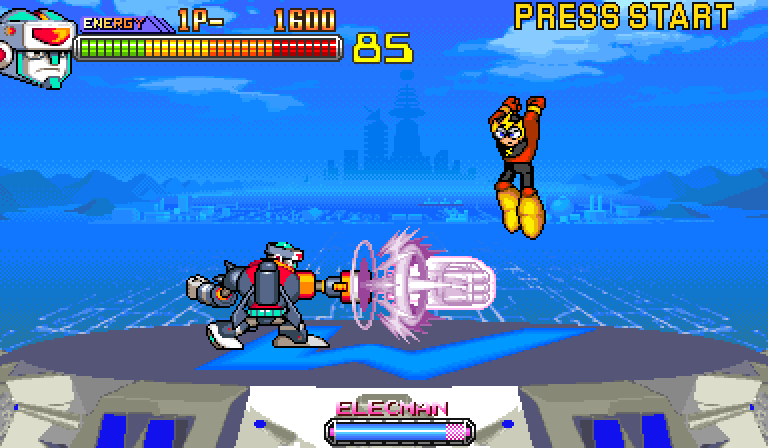 In the end I'm torn about Mega Man 2: The Power Fighters. It came out at a time when the series was reinventing itself on consoles and yet it feels like a step backwards. It does little to innovate over its predecessor and presents largely the same game with many of the same boss fights all over again. This really hurts a title that is all boss fights since you've essentially already seen these guys once before so why bother playing through all of them again? Despite this, though, the core of The Power Fighters is really fun. It's a good boss rush mode with some clever mechanics and fast-paced play. If Capcom could have just done a little more to innovate this game it could have been a real winner.

Although Western audiences didn't originally get to see The Power Fighters, it did eventually make it to our shores are part of the Mega Man Anniversary Collection. No major upgrades were done for this release, but it did at least mean those of us in the U.S. could finally (legally) play this game.

Meanwhile a couple of other releases of the game stayed across the pond in Japan. The first was a combo-pack of this game and it's predecessor published on the PlayStation 2 as Rockman Power Battle Fighters. This version included a new Versus mode so players could fight against each other, and not just against computer enemies. This release of the game was later ported to the PlayStation 3 network as well. 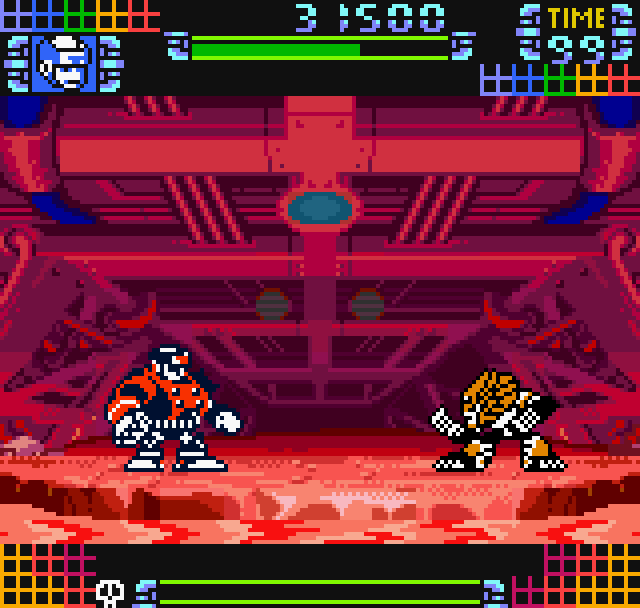 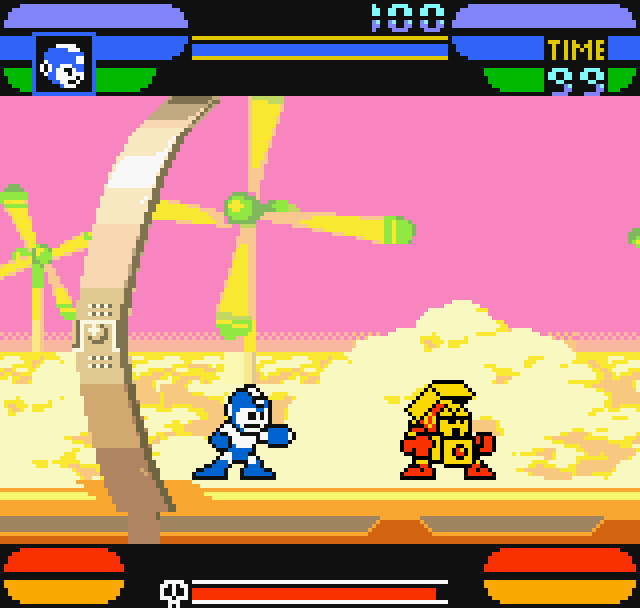 Finally, perhaps the most interesting version (from a historical standpoint) is the remake of the game for the NeoGeo Pocket Color. Although again only published in Japan, this version features stripped-down graphics (bringing it more in line with the NES era style of the classic games) while still maintaining all the basic functionality and basic flourishes you'd expect from a proper port. It's sadly little more than a curiosity now, especially with the more graphically robust version available in the Anniversary Collection. That said, it would still be nice to see Capcom re-release this as part of some hand held collection at some point in the future.