Let's Do This On the SNES... Wait, We Already Did?

By the end of the NES era, the original Mega ManIn 1987, Capcom released Mega Man on the NES, a game featuring a blue robot that fought other robots and took their powers (so that he could then fight other robots with those powers, and on, and on). The series went on to release over 50 games in 30 years and become one of the most famous gaming franchises in the world. series was at a bit of a crossroads. While the classic games where continuing their run (up through Mega Man 6), the SNES was graced with a spin-off series: Mega Man X. The X series was pitched as a continuation of the franchise, the next evolution for the next generation of game consoles. With the NES all but retired, where did that leave the original Blue Bomber? 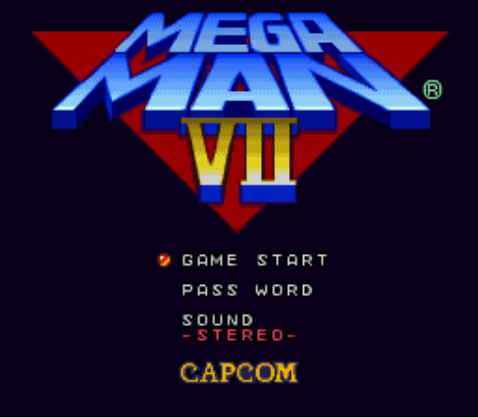 Well, Capcom simply moved the original robot over the SNES. The little guy got upgraded graphics, sound, and control (and just a little bit of Mega Man X spit-and-polish), but tried to retain as much of the class game-play as it could. It left the new game, Mega Man 7, in an interesting place -- could the game do enough to justify continuing the series on the SNES when its successor was already around? Was the classic Blue Bomber even needed anymore when X running around?

Classic fans will certainly argue that the best Blue Bomber is the original. Hell, looking ahead from this game, all of the classic character's successors -- X, Zero, and ZX -- have come and gone but the original robot is still running (in last year's Mega Man 11). From that perspective it does seem like it's best to always bet on (classic) blue. Personally, though, I still don't know if Mega Man 7 does enough to make it stand out from Mega Man X.

So here's the deal: in moving over to the SNES, Mega Man 7 appropriates a few ideas from some of the outlying games in the series. From the Game Boy titles, this seventh main iteration borrows the split-boss order. Mega Man gets confronted first by four Robot Masters that he has to defeat before a second set will arrive on the scene. This hadn't been done in a mainline title before now and it's certainly a bold choice to make. Certainly the system didn't lack the memory or screen space to load all the Robot Masters at once, so this was a deliberate change of pace to give home players a varied experience from what they might have been used to.

Along with the new menu the game also brought in the shop from the Game Boy titles, this time run by new robot Auto. Then the game added in a more open, explorational style akin to the Mega Man X series. Although the original Blue Bomber won't find capsules with the ghost of Dr. Light in them (unlike his predecessor's collecting style), he will find various upgrades for himself and Rush buried throughout the stages. To get all the upgrades players will have to revisit at least a couple of stages, and it's worth it since some of these upgrades are pretty darn good (like the Super Adapter armor, which is so useful). While none of these upgrades are strictly necessary (even less so than in the X series), it is well worth the player's time to go out of their way to find all of them. 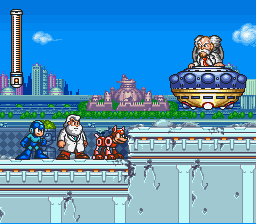 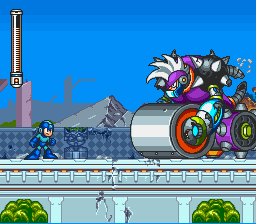 Really, the exploration is the biggest change the game makes to the traditional game-play, but it's hard to call it original. If you skip the upgrades what you're left with is yet another Mega Man game, one with the usual bevy of bosses that you explore in some kind of order before, inevitably, trudging through four Wily stages to take on the end boss. Creativity has never been this series' strong suit, and even the best ideas in this game just comes from other, related games in the series. Fans looking for something fresh and new probably wanted to look elsewhere.

And yet, long term, did this really matter? At the time, sure, the my younger self was rather annoyed at how little Mega Man 7 evolved the formula. So you could get a few upgrades in this game? Big deal. I was collecting upgrades left and right over in the Mega Man X games. Nothing new there. And yes, a direct comparison, one-on-one, between MM7 and MMX leaves number seven looking pretty lame. But the further you go into the X series, even on the SNES with X3, reveals a series that too quickly came to rely on collecting as the only game-play that mattered. By comparison, Mega Man 7 is a fuller, more satisfying experience.

The game does have its charms. The graphics are bright and gorgeous and a fun and lively style. The designers managed to bring the classic feel of Mega Man to the SNES without having to change or modify its innate, kid-friendly, chunky vibe. Sure, Mega Man is a little bigger (a detail that probably annoys me more than most classic players), but so are the bosses. They're also more detailed, more alive, and more interesting than many of the villains we'd gotten before. Mega Man 7 is a very bright and fun game to look at.

I also really prefer the music here to anything offered in the Mega Man X games. Oh, sure, at first blush the X games seem to have better music. Those games go for a harder edge to the songs, relying on a lot of crunchy synth-guitar riffs. But after playing through them a few times, especially the later games, it all begins to sound like power slop with one endless guitar riff after another. The music in Mega Man 7, though, has style, bright and chipper like the best songs in the series. If you can make it through Shade Man's stage, for example, without tapping your foot you have to be dead inside. 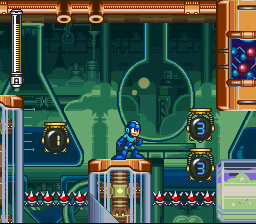 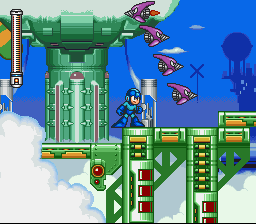 Plus, I do find that I just enjoy exploring this game. That at least partly because it's one of the easier games in the series. Although there is still plenty of enemy spam, plenty of cheap moments where you can get screwed over really quickly, that's just part-and-parcel for the series. They're still lessened here than in other games, and when you couple your upgrades with the gentler game play, this game ends up feeling much easier in the home stretch. That's right, this is one of the few games in the series that actually feels easier once you reach Wily.

The biggest reason for this: weapons refill between Wily stages. I know this is something the X games would do, letting you explore between stages and giving you a complete refill in the process, but it makes this game too easy. The whole point of the late game castles was that you were forced to conserve, to try and ensure you had enough weapon energy for the stages as well as the bosses and the refights down the road. This game throws conservation out the window so you get to use as much of your weapons as you like with absolutely no consequence.

Honestly, Wily's whole castle is just a joke, yet another example of the series totally dropping the ball in the late game. While the first stage can be pretty brutal, all the creativity for the game seemed to get dumped into that stage. Afterwards, the rest of the game is a walk right up until the final confrontation. Then it ramps right back up. If you aren't prepared for the battle with Wily, know what works best and have enough tanks to keep your weapons topped up, you could be in for some real trouble. Even knowing how to beat him I struggled with Wily, but that's also proof of my basic point: I made it to Wily. I suck at these games and rarely even reach the final castle, but here I can pretty easily make to the final boss. Sometimes I win, sometimes I quit in frustration, but even getting here shows how easy this game is. A good player shouldn't have a problem at all.

Is this a deal breaker? Well, if you only like the classic games in the series I could see you being rather annoyed with this change in Mega Man 7. True believers want their Mega games to be "Nintendo Hard" and this game certainly isn't. However, fans of the whole franchise will have their share of easy game to play through. Most of the X series is easier than the classic series, as is the Battle Network series. There are certainly great games throughout the franchise that aren't as hard as the classics, and plenty of people enjoy them. 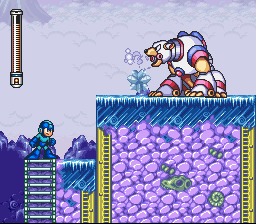 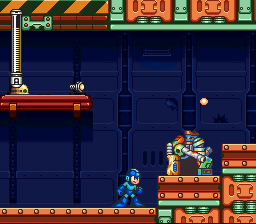 Mega Man 7's success, then, is all down to perspective. If you want a classic game in the classic style, this is not the title for you (you'll have to go sniffing around Mega Man 9 and Mega Man 10 for that fix). If you don't mind the games borrowing liberally from other titles in the franchise to make something familiar but just a little different, this game has a lot to offer. It's light, it's fun, it's not too hard, and it's enjoyable. Maybe it's not as good as Mega Man 2 or Mega Man 3 -- how many games can be? -- but it's pretty good in its own right.

Sadly, this game really didn't set a new precedent for the series as, for the next couple of games, the classic titles would struggle to define just want Mega Man should be for later console generations.