As we've noted before, while Nintendo fans had an overabundance of Mega ManIn 1987, Capcom released Mega Man on the NES, a game featuring a blue robot that fought other robots and took their powers (so that he could then fight other robots with those powers, and on, and on). The series went on to release over 50 games in 30 years and become one of the most famous gaming franchises in the world. games, Sega households were left out in the cold for the longest time. This eventually changed with the release of Mega Man: The Wily Wars, a compilation game that brought the first three Mega Man games to the Genesis. This was a great first taste of the original series, but after that, Sega fans didn't get much more to work with. About the only title for the longest time didn't even come to Sega's big console, instead showing up later on its little cousin, the Game Gear. 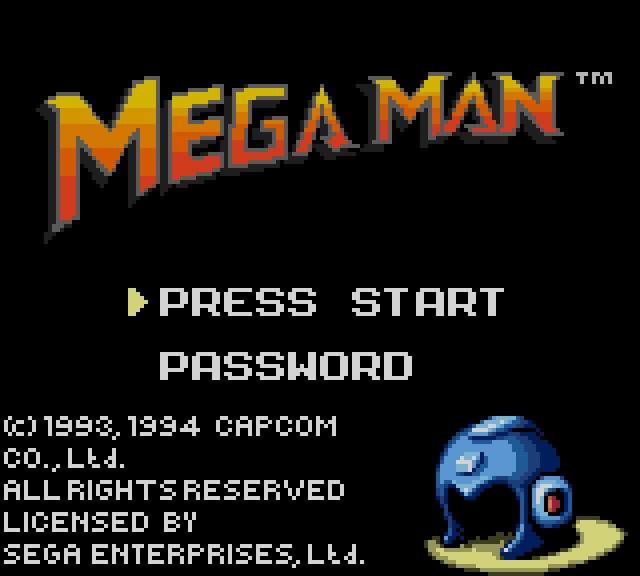 Fans of the Game Gear know that this hand-held console actually wasn't all that bad. Due to its internal technology it actually was capable of cranking graphics that were even better than the Genesis (if the people making a game for it knew what they were doing). It didn't have the best sound chip, and memory constraints were always an issue. In the right hands, though, Game Gear games could sing. Sadly, Freestyle, the company behind this weird little title, weren't really the best hands for a project such as this.

Anyone that has played the various Game Boy will immediately understand the basic setup for this title. Wily is back and has brought a selection of his previous bad guys to terrorize Mega Man through a selection of stages. This little port includes a collection of bosses from Mega Man 4 (Bright Man and Toad Man) and Mega Man 5 (Stone Man, Napalm Man, Star Man, and Wave Man). The first four are presented immediately and the player can then select their path through the stages from there. All very basic but, at first blush, this feels like quite an upgrade over the Game Boy titles, if for no other reason than the fact that the game is full color (unlike its black-and-white hand-held predecessors).

Once you get into the game, though, not everything really holds up. For starters, this game is much more of a port than any of the Game Boy Mega Man titles. Stages are ripped just about whole hog from the original NES games, so if you've played those games you've already seen these stages. That was one nice thing about the Game Boy iterations: they at least remixed the stages and tried to make them better fit the hardware on display. The Game Gear Mega Man, though, is perfectly happy giving you a rehash of what you've seen before.

This is actually kind of a problem considering that the Game Gear has a smaller screen than the standard CRT TVs at the time. When it came time to move stages over to the Game Boy Capcom elected to remake them, changing up elements and crafting the stages to fit the small hand-held's screen. That same care wasn't taken by Freestyle for the Game Gear port, so just about every stage features areas larger and wider than the Game Gear's screen. This leads to instances where Mega Man will leap up or jump down and the screen will have to scroll with him. This can cause obstacles to suddenly show up and damage the hero or, in some instances, it'll force the player to have to make a blind jump into a pit, praying that there's a platform there for them to land on. This is terrible level design. 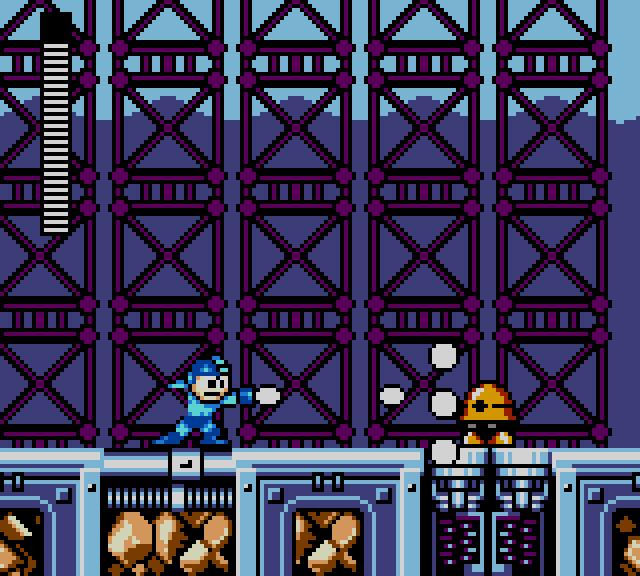 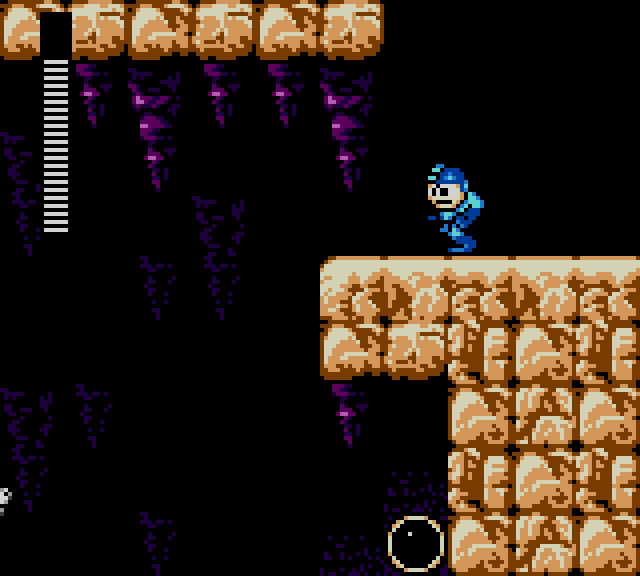 The complete lack of creativity is on display in just about all sectors of the game. Because the titles reuses stages whole-hog from the NES games some secret areas are included in the Game Gear title. This is especially noticeable in the Mega Man 5 stages where Mega Man would have to break open areas to find Beat letters. Beat isn't in this game, so those letters have simply been replaced with health, ammo, and lives. Would it have been that hard to include a bonus power up to unlock? That became the standard in the Game Boy games but there's nothing cool to unlock or explore in this title.

So much of the game is just a reuse of what came before. Once you're past the first four stages you unlock Dr. Cossack's castle, but Cossack himself isn't in the game. Instead, his two stages are just another two Robot Master stages: Wave Man and Toad Man, and, yes, these are the exact same stages you played back in the NES era. After that comes Dr. Wily's castle, but it's not even a proper castle. Firstly we get a remake of Flash Man's stage from Mega Man 2, just without any boss to fight at the end. After that, Wily's second stage is just a simple hallway to what looks like a refight teleporter, only instead the player is immediately dropped in the Dr. Wily capsule fight (which, of course, is ripped from Mega Man 5). After that, roll the credits because the game is already done.

This whole game is just tragically put together. I understand that this was a team making a quick port for a hand-held console, but some care and effort should have been put in. This game is so short than even the original Game Boy title, Mega Man in Dr. Wily's Revenge, was longer (at least that game had extra bosses included in place of the refight section). There are so many basic features from the NES and Game Boy titles that weren't included, leaving this feeling like a hollow, quick cash-in title.

Think about it like this: after playing all the NES and Game Boy titles you find out there's a port coming to the Game Gear. You probably already knew about Dr. Wily's Revenge, at least seeing it on the Sega Channel if you lived in the U.S., so the thought of a good port coming to the Game Gear probably had you stoked. When you get it though you find a game that just reuses seven stages from previous games with no effort put in to better craft them for the hardware. Any secret areas from previous games were nerfed, and all the best weapons and items are missing from this game. There isn't even a P-Chip/Bolt shop in this game, something that's been standard in the Mega Man titles since the fourth Game Boy game. This had to feel like a slap in the face. 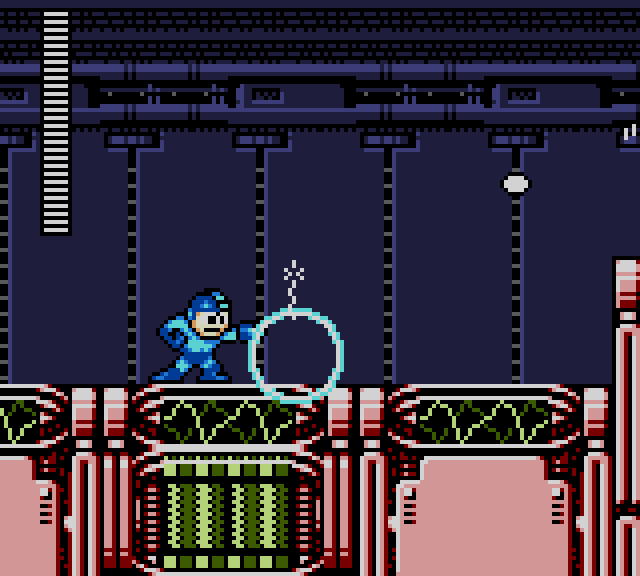 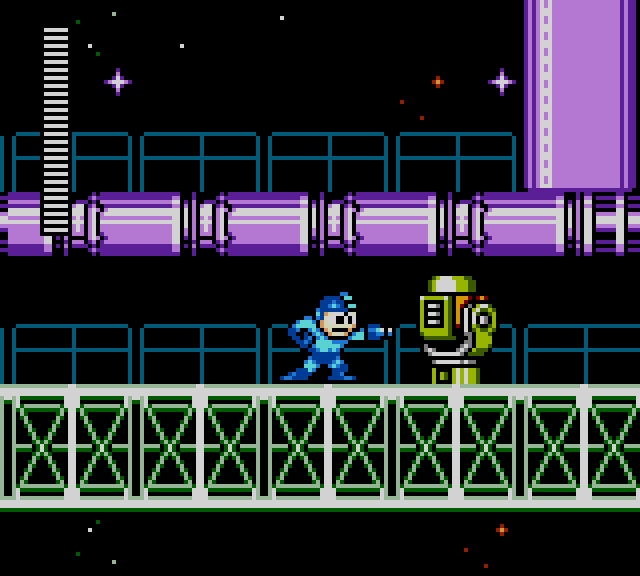 Every part of this game just feels compromised, rushed out the door to meet a deadline by a company that didn't really understand what it was doing. For instance, who chose the particular bosses highlighted in this game? Bear in mind that the last Game Boy game to feature NES bosses was Mega Man IV (as Mega Man V was the oddity, featuring StarDroids). Despite the fact that the fourth Game Boy title already featured Robot Masters from Mega Man 4 and Mega Man 5, most of those bosses are reused here. Stone Man, Toad Man, Bright Man, and Napalm Man show up once again, and the only new characters in the set were Wave Man and Star Man.

Since the producers were just lifting stuff from previous games, would it really have been that hard to maybe give portable players something that hadn't already shown up in a hand-held title? This could have been the next evolution of the class Game Boy title format, a mixture of Mega Man 5 and Mega Man 6 villains, something new to sate players. That would have at least been better than this hollow rehash.

But then the bosses selected are also some of the worst from the games they were in. Stone Man and Napalm Man have, arguably, the worst Robot Master weapons in the series, and really, Wave Man and Star Man aren't that much better. What we end up with is a weird spiral weapon that's impossible to aim (Stone), two floor clearing weapons of limited use (Napalm and Wave), a cruddy shield (Star), and then two screen clearers (Toad and Bright). None of these weapons have great utility and they're all hampered by limited ammo charges. By and large Mega is going to be using his Mega Buster because nothing else he earns is all that great.

Try to imagine any of the other games in the series having that paltry a selection of weaponry. Then add to it the fact that the only utility item you get is Rush Coil. It's absolutely tragic. This game really is hobbled, start to finish, with the least amount of care put in to make the game at all interesting for the people that got stuck with it. 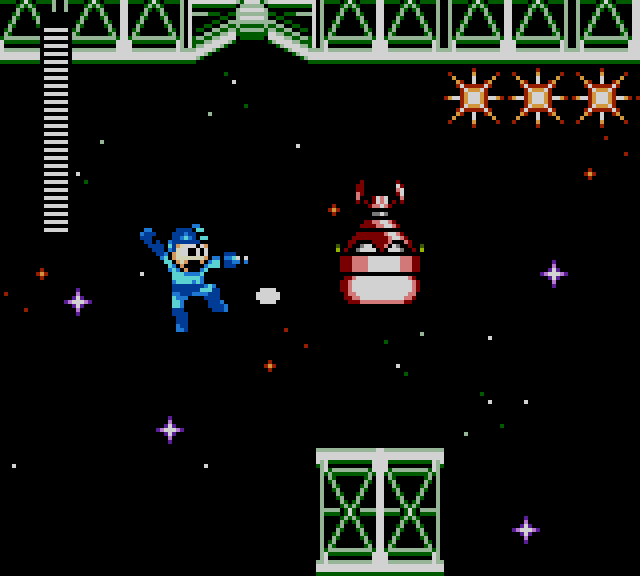 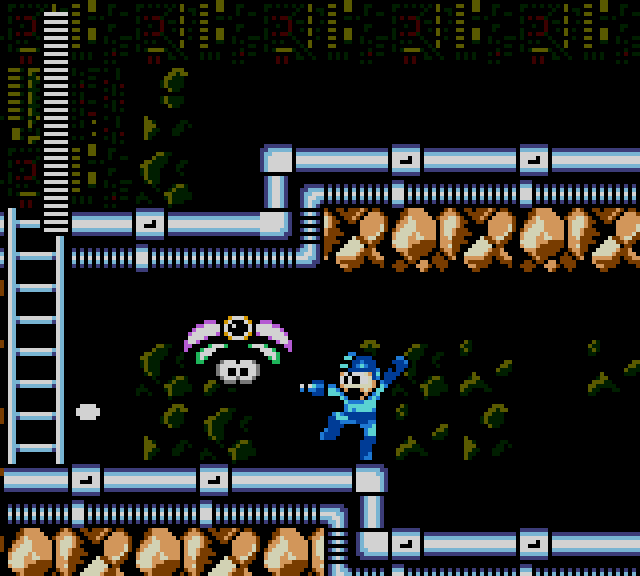 About the only thing I can say that nice about the game is that it looks good. The graphics weren't really improved over the NES iterations (as, again, this is just ripped straight from those titles), but at least the graphics are crisp and clean. That's about all you get from this title, a rehash of what you've seen before, hobbled by the hardware without any extra spit and polish to make it worth owning. There's a reason no one really talks about the Game Gear Mega Man at this point. Its so mediocre everyone forgot it existed.