Throw Down a Red Card

Pity the Mega ManIn 1987, Capcom released Mega Man on the NES, a game featuring a blue robot that fought other robots and took their powers (so that he could then fight other robots with those powers, and on, and on). The series went on to release over 50 games in 30 years and become one of the most famous gaming franchises in the world. fans on the SNES era, eagerly anticipating their favorite series moving to the hot, new system. All they wanted was run-and-gun action in the classic series and, up until then, all they'd had to work with was Mega Man X. That series was fun, certainly, but it wasn't the classic Blue Bomber fans truly craved. They wanted the original with better graphics and sound. 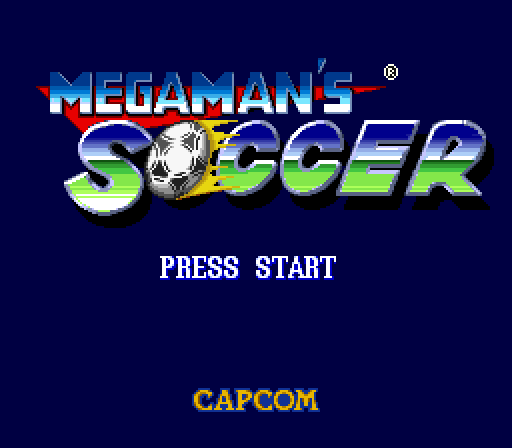 Instead, they got Mega Man Soccer, the first official classic series release for the SNES. It's easy to understand Capcom's thought process behind this -- the classic Mega Man series was an NES-exclusive while the SNES had his successor, X, in two titles already. Why muddy the waters by having two versions of the character on the same system? Plus, Nintendo had already shown that mascot-led sports titles could find success on the SNES when they released Super Mario Kart. Why not give fans what they "want" with a Mega-starring sports game?

Of course, this decision was quickly shown to be an error once Mega Man Soccer was released. This title showed that Capcom clearly didn't understand how to move Mega Man outside of his classic run-n-gun roots into other games, especially not mascot-led sports games. Mega Man Soccer features neither the fast-paced action of the character's platformer series nor the fun of Super Mario Kart. It is, in short, a misfire on every level.

From the beginning everything feels off about Mega Man Soccer. Mega, Roll, and Dr. Light are watching a soccer match when suddenly a set of Robot Masters invade the game and start blowing things up. Mega Man has to get on the scene and take them on... in games of soccer. This conceit alone is already stupid and that's before you even get into the games. Naturally, you do this by choosing from the select screen one of eight Robot Masters to fight and then playing them in a ten minute match.

If some tweaks had been done, this setup might have worked (especially if the game had just ditched the story which, seriously, is nonsensical). Picking and choosing the Robot Masters makes sense if the decisions, in any way, seem reasoned. Each Robot master leads a team of their clones against mega Man (and his clones) in an 8-on-8 game. Each Robot master controls differently, and they each have a single special power that they (like Mega) can use twice during the match. If you could somehow see how each of the Robot Masters handled ahead of time (which were faster or slower) so you could figure out a path through the game, that could have been helpful. 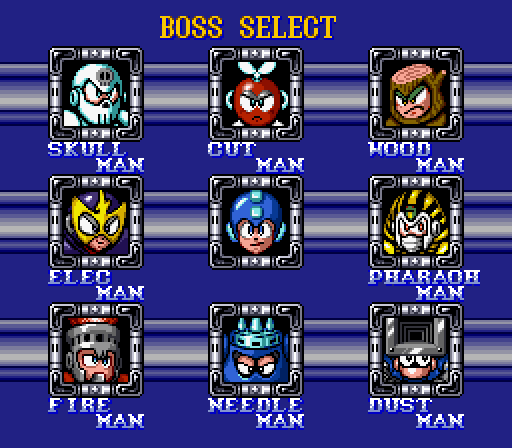 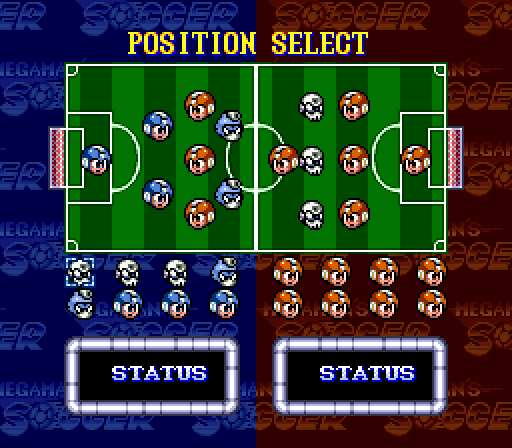 Unfortunately, like a normal Mega Man game, you only get a sense of what the Robot Master can do once you've selected them. Wood Man is slow but strong while Elec Man is quick and zippy, for instance. They all have their own individual stats and depending on your style of play you'll do better or worse against the various teams. But you only get to know all of this once you've selected your match, a very Mega Man-esque move but not a very player-friendly one.

Also bear in mind that matches are ten minutes long, at least twice the length of any stage in the classic series (and probably closer to at least three times the length of many of them). Without being able to see anything about who you're fighting you have to commit to ten minutes of play, a big issue considering the circumstances. Anything to aid in your decisions ahead of time would have really eased players into the game.

That said, the path through the game is largely arbitrary. Unlike in classic games there really isn't any good order to the Robot Masters -- taking any one on is probably as good a choice as any other, and it certainly doesn't influence the game play that much. One reason is because there's very little reward for defeating any one of the Robot Masters. Sure, upon winning the match one player from their team will join yours, so you can have some diversity to the speed and control stats of your players. Their special abilities, though, aren't really all that special and no matter how many new team members you have on your side you still only get two charges of the special power-kick to use.

That special power-kick is beyond lackluster, too. There are really only four special moves -- Pharaoh Man and Fire Man kick a fire ball, Cut Man and Needle Man kick a power shot that breaks a robot into pieces (temporarily), Skull Man and Wood Man kick a shielded ball that can bounce past a single blocker, and Elec Man and Dust Man kick a ball that can stun a single blocker as it goes past. They all, in effect, do the same thing and none of them seems to have any special influence on the other robots (Fire Man can be stunned by the fire ball, for example). Since you don't get extra ammo, or any new special abilities, there's little reason to care about one player over another -- a team of entire Mega Men will do just as well as anyone else. 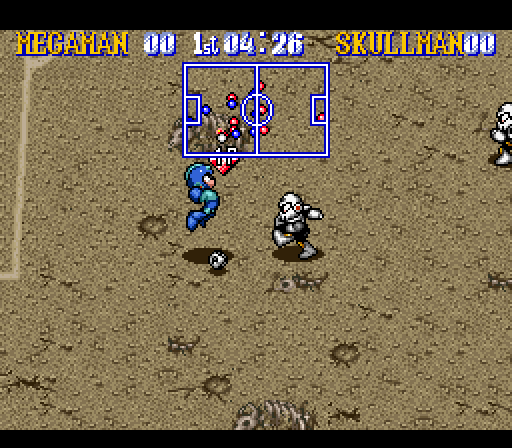 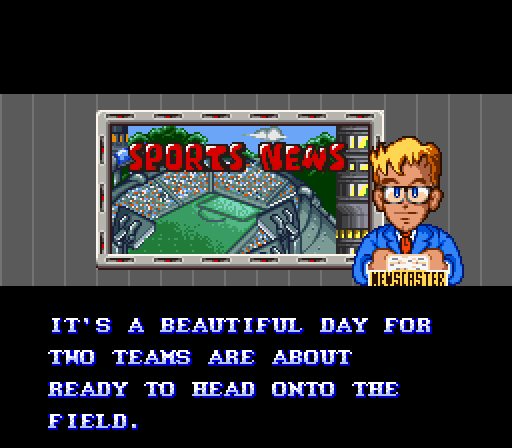 The actual matches, the whole point of the game, are simply interminable. The controls are slow and wonky with most of the characters moving that they're in molasseses. Passing and kicking seems to be directed more by where the ball is aimed than where you're trying to tell the ball to go, and the ball will sometimes shoot off far from where you wanted simple because the game thinks that's what you meant. You're constantly fighting the control, passing the buggy ball around so the other team can't steal it from you, and praying the ball goes where you want.

This would be worse if the other goalies didn't have truly terrible A.I. It's pretty easy to get them stuck in defensive loops, opening up huge spaces in the goal you can easily score on. Meanwhile your own goalie is a best, often blocking shots left and right, meaning you have much less to worry about than your opponents. Not that the AI is going to challenge you all that much when they are up against your goalie. While you can maneuver around and wait for the right shot, the enemies will invariably take whatever shot they can get regardless of where your defender is placed. They might score occasionally but never with the frequency you will.

It seems like the programmers knew this was a problem so, over the course of a match, the other team will get more and more aggressive, eventually stuffing most of your shots by the time the end-of-game buzzer goes off. It's never challenging but it's certainly annoying. Fighting them, while fighting the control, and waiting for the buzzer to finally call the game, all amounts to a very tedious play experience.

That's before you even get to the end portion of the game, mind you. You've already played through eight Robot Master fields and then Skull Castle opens revealing three more matches to deal with: Enker, Protoman, and Dr. Wily. bear in mind that you're already spent the better part of two hours getting here, and the game reveals there's easily another forty or so minutes left to battle through (with team setup screens and the like on top of the actual game time). It's three more matches than I wanted to play by the time I got there (and, really, I was already done with the game after my first two matches). 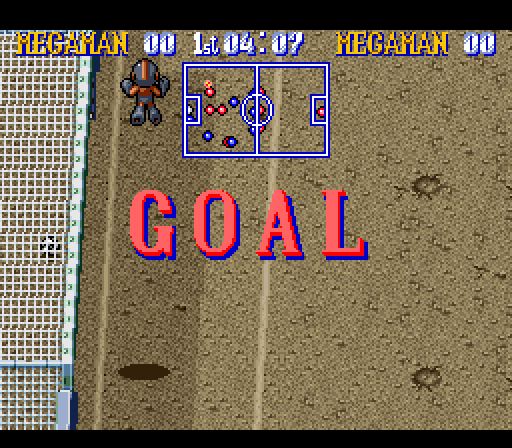 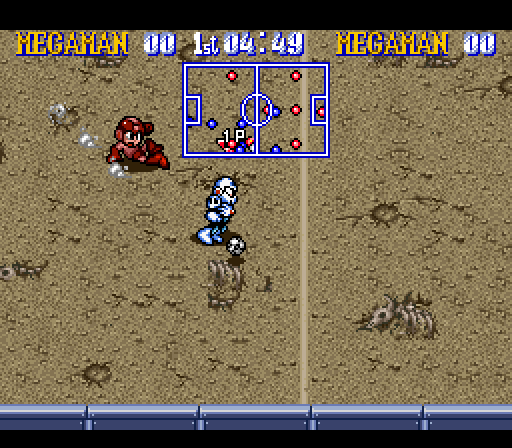 Really, for the game to be fun a whole lot of changes would have had to be made. The matches needed to be half the length and there needed to be real rewards for actually besting a Robot Master -- more powers, more abilities, and more earned than just a new, dinky player to fill one slot on your roster. If the game could have been restructured for speed and quick fun, it might have worked as a one-off lark, but somehow, even then, I doubt it.

I just don't understand who this game was really for. It's too slow for Mega Man fans and not a solidi enough soccer sim for sports fans. It's like Capcom thought, "Mega Man, but in a soccer game," and then didn't think about the pitch any further. I pity the people that had to work on this game, that had to beta test it, and I pity everyone who bought it expecting a good game. Mega Man Soccer is awful, easily one of the worst games in the series (if not the absolute worst). There is absolutely no reason to go out and search for this game -- you'll only find disappointment if you try.