The story of the creation of Mighty No. 9 is likely more interesting than the actual game itself. Promoted initially at the 2013 Penny Arcade Expo, the game was billed as a return to the classic Mega ManIn 1987, Capcom released Mega Man on the NES, a game featuring a blue robot that fought other robots and took their powers (so that he could then fight other robots with those powers, and on, and on). The series went on to release over 50 games in 30 years and become one of the most famous gaming franchises in the world. formula. By this point in the series history, the original Mega Man games had fallen into disfavor with Capcom. Most of the recent entries in the series had been RPGs, Battle Network games and its associated sequels and spin-offs, and even those eventually didn't interest thee company as the series was run into the ground with yearly iterations (not unlike how it went for the classic series). Plus, with games like Mega Man Zero and the ZX/Advent games not eexactly setting the world on fire, Capcom was looking beyond Mega Man for other series to maintain. 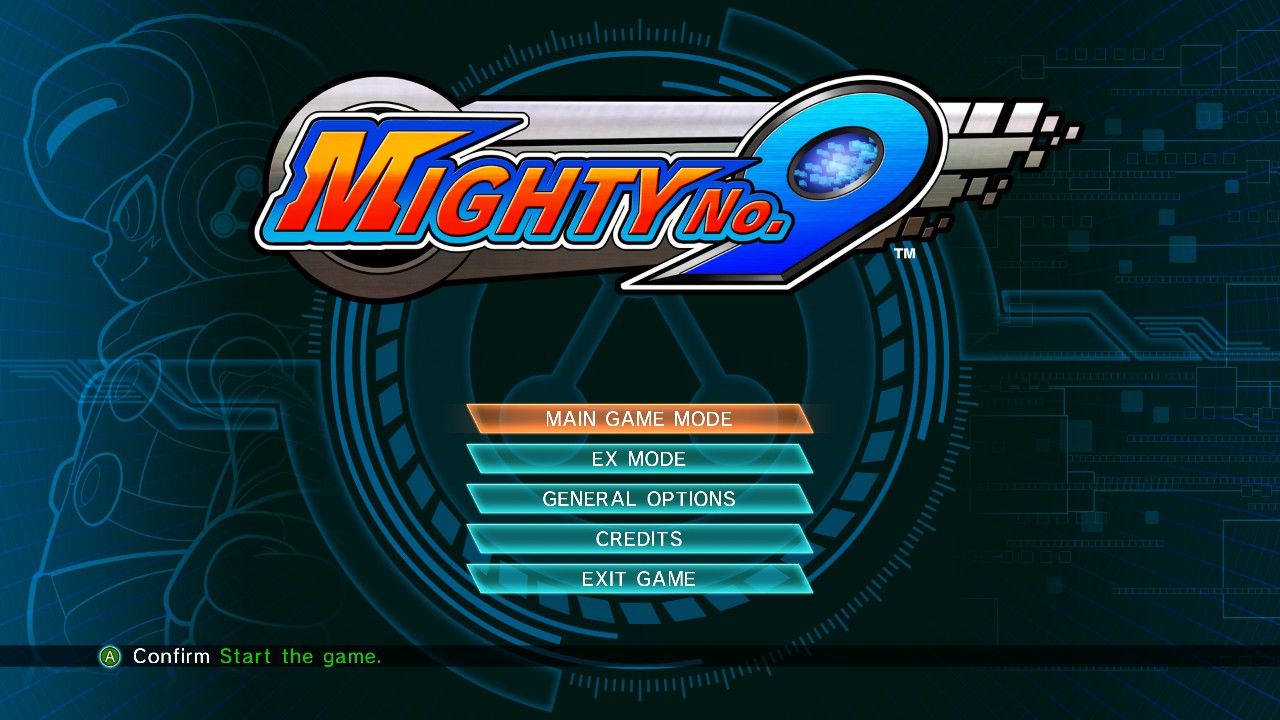 This left series creator Kenji Inafune understandably miffed. The Blue Bomber was his baby, having worked on the series as an illustrator from the very first game in the series, and then working as a lead producer on most of the titles to come out in the series. Although He personally downplays his credit in the creation of the original Mega Man, he's more closely responsible for the series than anyone else at Capcom, ever. When Capcom showed little interest in continuing the series (especially not along the lines Inafune was interested in), the designer left the company to found his own, Comcept, so he could design new IPs that would allow him to follow his own ideas about how the Mega Man series should go. Showcasing his new IP, Mighty No. 9, and new lead character, Beck, Inafune gave the world what he hoped would be a new series to pick up where Mega Man left off.

When the Kickstarter launched for the game, it was almost instantly successful. Two days after launching the KS met its minimum goal. Of the $900,000 that was "needed" to make the game, fans pledged $3.85 Million, making the drive a rousing success, start to finish. This allowed Comcept to team up with Inti Creates to develop the game on a budget that seemed (at least to fans) more than adequate to get the job done. And then the game was delayed, and delayed, and delayed again. In the process, Comcept went back to Kickstarter for a second pledge drive for expansions andd additional languages, essentially making the argument that, somehow, $3.85 Million wasn't enough to finish a game that was only supposed to cost $900,000 to develop. Fans, understandably, were upset by this move, as they were when, before Mighty No. 9Red Ash (a spiritual successor to the Mega Man Legends games).

Worse, though, was the fact that Comcept pretty much clammed up about what was going on behind the scenes. Inafune, from the beginning, promised that everything about the game development would be transparent, and for a while the company's social media accounts buzzed with activities. But as the delays happened, and fans started questioning everything. What was the company up to? What was taking so long? Where was all the money going? And, at a certain point, the company stopped talking. Backers did eventually get their games but many of the promised physical rewards, like pins and, in fact, physical copies of the DS and Vita editions of the games, never materialized. The money, it seems, simply ran out.

Behind the scenes issues are one thing, and certainly it sucks that the company didn't deliver on all its pormised physical content -- that's shady, to be sure, but also part of the risk with Kickstarter (having backed a few project that, in the end, never materialized, I know what a crap shoot that site can be). End of the day, though, what people are going to remember is the game itself. Any struggles during development could have been forgiven as growing pains for a new company so long as Mighty No. 9 was a gem. Sadly, the final game ended up a lump of coal instead. 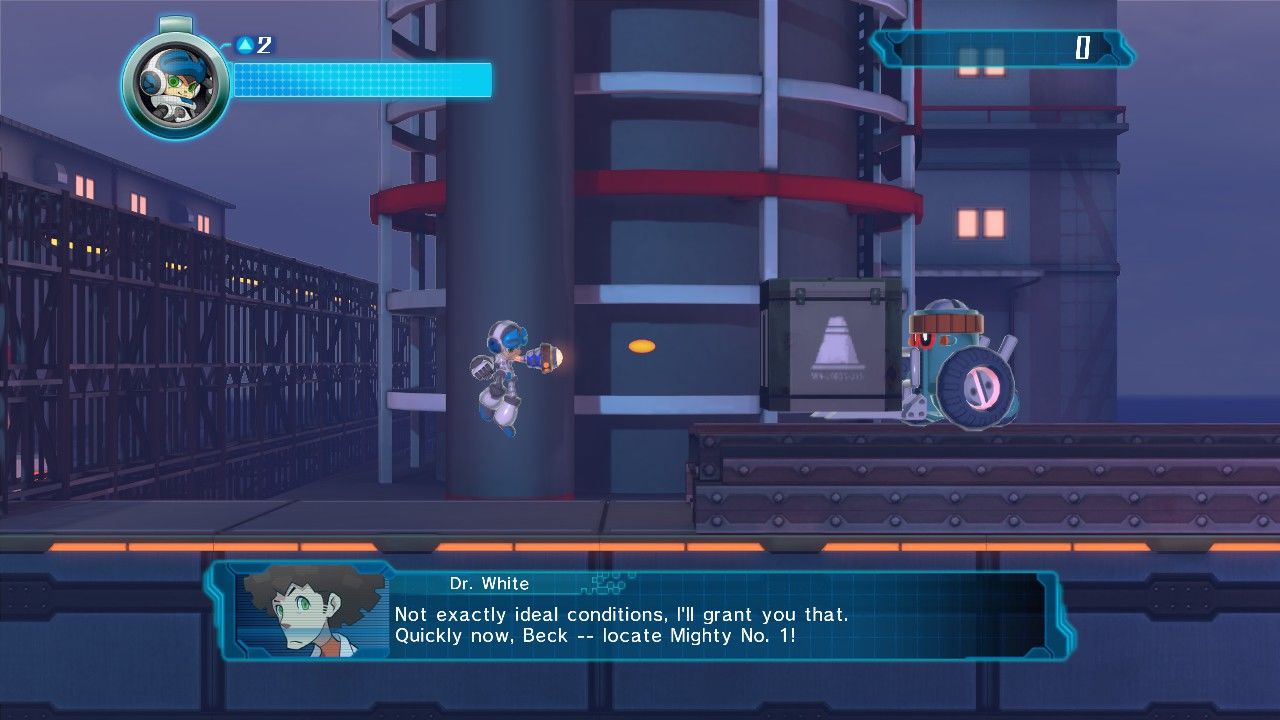 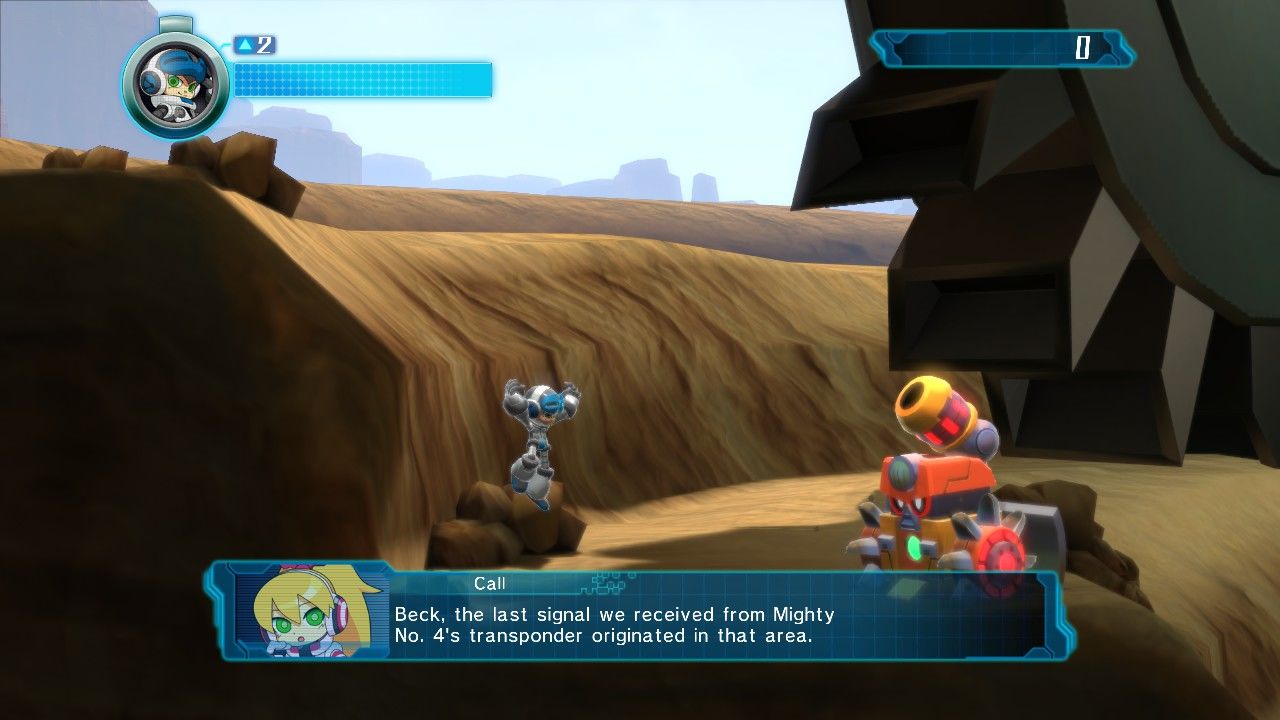 Things are off from the beginning when you first jump into Mighty No. 9. Although the gameplay seems tight and responsive, the standard Mega Man run-and-gun platforming with a few extra little twists thrown in (like continuous air dashing and ledge grabbing). But almost immediately the game gets in the way of itself. The game opens with a lengthy cut-scene that goes on far longer than it needs to. Once you do get to play as Beck, you're almost immediately interupted by another cut-scene. And then there's cut-scenes throughout the game as the characters try to explain everything to you about the story, the setting, and what you can do. That would be fine, for the most part, if the story wasn't essentially good vs. wevil, good robot against bad scientist (again, with minor twists) like we'd seen in every Mega Man game. We don't need hand-holding or over-explaining when we've already seen all this before.

Its unforgivable when a game pauses the action, the primary source of enjoyment in an action game, to give a lengthy cut-scene. The fact that this happens at multiple points throughout the game speaks to a major issue during development. The production team was clearly in love with Beck, his sister Call, all the other robots and the friendly scientists in the game. They thought they had real winners here and they figured players would want to spend a lot of time with them. Fact is, though, we don't. The character designs aren't interesting in the game and the writing for the voice actors and the story is sub-par at best. The characters spout off bad plot and cheesy one-liners every chance they get, and very quickly (for me, within seconds of booting the game) I just wanted to get out of the story so I could enjoy the action.

That said, I wasn't exactly thrilled by the action, either. Beck can run around a shoot like Mega Man, and this all feels silky smooth (as you'd expect it should). The first issue I ran into was that to gain the best benefits in the game when you're fighting enemies (like power boosts and health drops) you have to dash into stunned enemies, and this is for every enemy. With enough enemies on screen the chaos can build and suddenly you're taking hits as you're trying to dash through guys, getting spammed by attacks when you simply want to managed how much is on screen. It can quickly become overwhelming and, for a novice player like myself, the very mechanic that should, in theory, speed up the game makes it feel so much slower.

You have to dash into enemies, though, if you want to clear the game at a reasonable rate. Enemies have a lot of health and while you can shoot them down until the explode, it's much fast to dash into them when they're stunned. And you're going to have to do this is you want to defeat the bosses of the game -- once they take a certain amount of damage they'll get stunned, but then they're invincible to any further damage. Worse, if you don't dash into them quickly enough they'll start to regain their health, making the boss fights feel even longer. 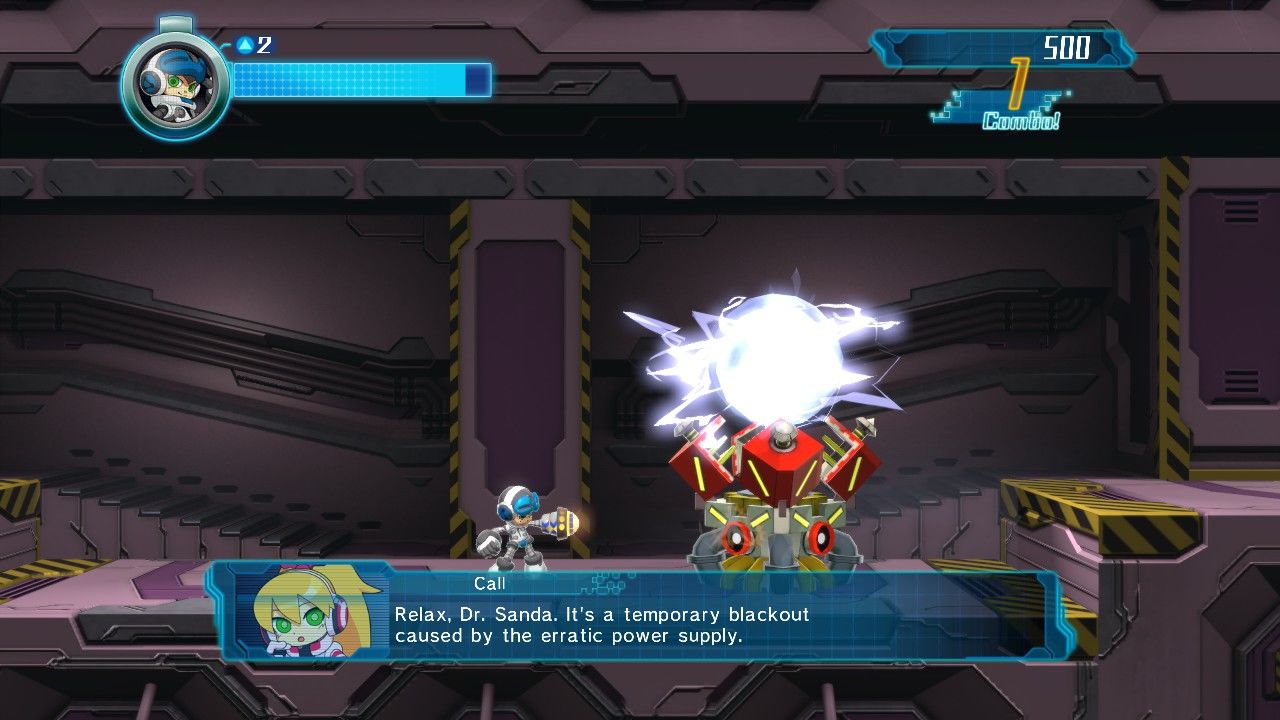 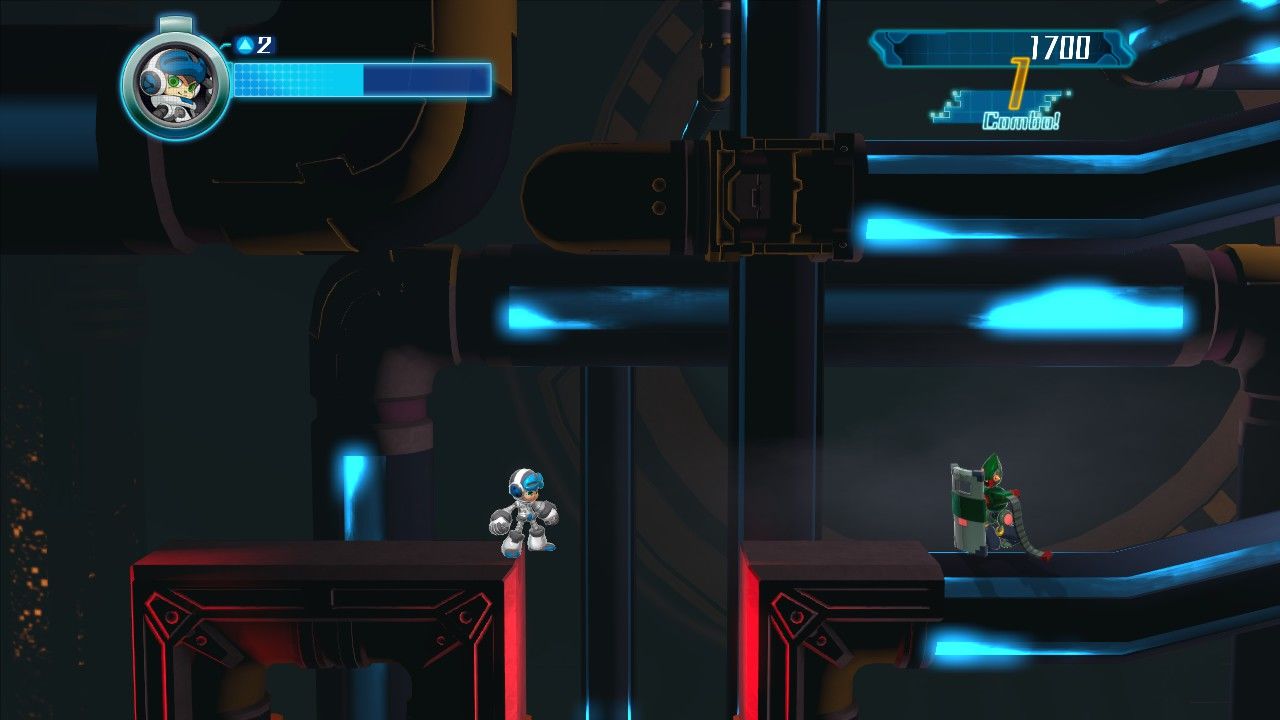 One could just say, "hey, get better at the mechanics of the game." That's true, and if I had been motivated to play through the game multiple times it might have all finally clicked and felt enjoyable. Simple fact is, though, I didn't want to get better at the game. I played through it once and found little in the way on substance to keep me coming back. The levels, for starters, just aren't memorable. They're all designed the same waay, airy and flat with a single mechanic -- ice, fire, explosives -- to set them apart. None of them are really memorable, not in the way the classic Mega Man stages were, and they all feature the same muddy, chunky graphics. I found myself finishing a stage and then forgetting everything about it because very little of it stood out in my mind. They existed, that was about it.

And I think that's the big issue with the game. It hews closely to the classic Mega Man, but for a game created by the master of the Blue Bomber, Mighty No. 9 seems to have a very poor undertsand about what made the classic games so special. I don't know how deeply Inafune was involved in the game -- maybe he was off doing big picture stuff as he plotted out his Mighty No. 9/Red Ash shared universe, letting his underlings do most of the day-to-day work on this game -- but it doesn't have any of the magic of his best )or even his mediocre) works. Mighty No. 9 is a flat, workmanlike game that goes through the motions of being Mega Man game without any of the spark that would make a title in the series special.

I might throw shade at Mega Man 11 but at least that game understood what it took to be an enjoyable Blue Bomber experience. Mighty No. 9 might dress itself up as the spiritual sucessor to Mega Man but, in all the ways that matter (everything beyond a surface similarity and a story seemingly ripped from the pages of the class series) the game misses the mark. What's most surprising to me is that I knew the legacy of the game going in, I knew what the fans through of it and how much it had been raked over the coals by, basically, everyone. And still, even knowing that going in I was disappointed by Mighty No. 9. I didn't think I could be disappointed by a game that alrady promised to be a total let down and yet, somehow, this game managed it. I guess that's something?