Get In Your Cart and Plod

Mega ManIn 1987, Capcom released Mega Man on the NES, a game featuring a blue robot that fought other robots and took their powers (so that he could then fight other robots with those powers, and on, and on). The series went on to release over 50 games in 30 years and become one of the most famous gaming franchises in the world. is a mascot character. NintendoSince 1983 (with the release of the Famicom gaming system in Japan), Nintendo has proven to be a gaming company dedicated to finding what gamers want, even when the gamers don't know it themselves. From dual-screen systems, to motion controls, to convertible home console/portable consoles, Nintendo regularly proves that the weirdest innovation is exactly what the gaming community needs. has the Mario clan, Sega has Sonic and friends, and Capcom has Mega Man. The thought, clearly, from Capcom has always been that, "whatever Mario can do, Mega Man can do." This explains why the character occasionally would diversify out, sometimes for good (as in Wily and Light's Mega Board) and sometimes for ill (like with Mega Man Soccer) but always because that's what the other mascot characters were doing. That's the only explanation I have for why the head honchos at Capcom decided that what Mega Man really needed to do next was launch a Kart Racing game. 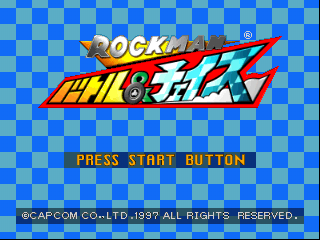 Now, don't get me wrong: I love kart racers when they're doing right. I've spent more time than I care to admit playing Mario Kart 64, and ever since that game I'll check out anything in the genre for at least a couple of laps. At the same time, though, it's hard to do a good kart racer and it's harder still to stand out against the Mario Kart series -- either you're worse than those games or, at best, you're just as good but still feel like too much of a clone. It's hard to be good and different in the genre, especially when Nintendo constantly iterates and reinvents the formula with each new sequel.

Released on the PlayStation in 1998 (in the U.S.), Mega Man: Battle and Chase tries to put its own spin on the Karting formula, to make a game that could stand up with the best of the similar games in the genre while still working in it's own Mega Man twists. Credit where it's due, it does find a way to iterate on the formula in unique ways. What it doesn't do, though, is provide a very enjoyable experience. It lacks the fun of Mario Kart 64 (which came out two years earlier) and stumbles in its attempt to keep up.

The PlayStation was not exactly a powerful machine. It could do 3D polygon graphics, although not well, and was really meant for weird hybrid graphics styles that mixed sprites with 3D effects (Grandia) or polygons on painterly, flat backgrounds (Final Fantasy 7). Sure, the system could do full 3D (such as in the Tony Hawk games), but as much fun as those games were, no one was really going to argue they looked good -- usually they looked much better when ported over to the XBox, Game Cube, or PlayStation 2.

The thing is that Nintendo clearly knew this. Even though their machine was more powerful (although I'm sure fanboys out there will argue the specifics), they still used sprites mixed with polygons for Mario Kart 64. It eased the load and allowed the levels to look better, to really sing. In comparison, though, Mega Man: Battle and Chase uses polygons for everything. I respect the balls of that decision -- it's a fully 3D game so why not use 3D graphics for everything -- but the game just ends up looking muddy and undercooked. It's not at all pretty, or crisp, and more often than not it's hard to see everything on screen. 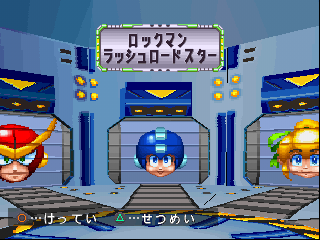 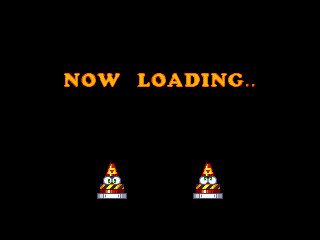 But then Nintendo also better understood the basic formula of the Karting genre. These are races that should be quick -- in, out, and done -- with short collections of circuits people can pick up and play. Battle and Chase, though, is a long game, one you're meant to conquer over and over again. Once you've picked a driver, you take them through the collection of courses (in any order because this is a Mega Man game), and if you beat the driver at the course (such as Guts Man, Shadow Man, and their ilk) you can take one of their car parts (Engine, Tires, Tail, or Body) and respec it onto your own car. Race the courses a few times, earn all the parts you want, and make a monster car for yourself.

Well, that should be the plan, but in practice this just makes the game into a slog. Part of the fun of a Karting game is picking a driver, testing them out, and then moving on to a different one. If you're replaying a course it's because you want to do something different, or you just wanna do a quick time trial. These aren't considerations in Battle and Chase, though, because once you pick your driver you're committed to them; once you choose Mega Man (for example), you're committed to them and you'll be replaying thee 10 courses over and over with them until they've earned everything. That or you'll get bored and wander away (which is what I did after a while).

In concept I don't hate the way Battle and Chase comes at the genre. I think fighting other Robot Masters and earning parts of their wheels is neat (like you're racing for Pink Slips). In practice, though, there's just not enough variety to the races to really make them interesting. There's no day/night cycle, no weather patterns, no reverse coursing -- nothing that could change up the game-play in unpredictable ways to make the game more interesting for repeated loops.

Worse, there's no real way to see how good or bad a part might be without first taking it from another driver, applying it to your own car, and then testing it on the track. Sometimes you can figure it out before you take the piece -- Guts Man can drive across the dirt portions of the track without slowing down, hinting that his tires are good on dirt -- but in most cases it's hard to know what benefit you'll get from a piece until you install it. How good are are the tails on cars and will the one from Shadow Man be better or worse than the one from Guts or Proto or Roll? Good luck figuring that out ahead of it. 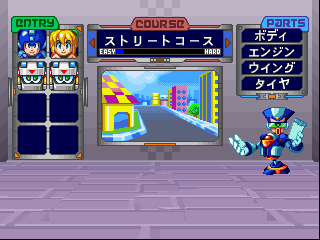 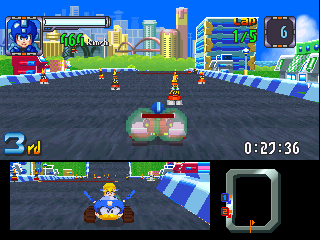 Really, though, the simple fact is that the game isn't interesting enough to play over and over again to fully power up any of the cars. Most of the tracks are unremarkable, bland and tedious with little in the way of challenges or thrills to keep you engaged. There's none of the variety or wacky hi-jinx to be found in most Mario Kart tracks, and considering this came out two years after the Nintendo 64 version, which itself was a sequel to the original SNES Super Mario Kart, and these trackers are worse than anything from either of those games.

On top of that, the driving just isn't that great. There's a real weight to the vehicles in the Mario Kart series. You get a sense of their physicality, their control as they move around the track. But the karts in Battle and Chase barely seem like real vehicles at all. They control like bumper cars, little machines that turn and slide unrealistically on the roads. It goes beyond arcade-style control to feeling like Hot Wheels on a floor. It's just not fun to play.

If Mega Man: Battle and Chase had come out before all the Mario Kart games (let alone any of the other clones of those games to come along in the interim) maybe this game would have seemed more interesting. But the fact is that it wasn't released in a vacuum and, if it had been, it's doubtful this Mega Man game would have been envisioned at all. It's a poorly made game that doesn't understand the best aspects of that series and, while it has some interesting ideas, it implements them over a shaky, tedious core.

While I do complain about the length and repetitive nature of this game, I will not that a long-form, quest-style Karting game can work. Right before this game came out in the U.S. (and right after it came out in Japan), Rare released their own take on the Kart genre: Diddy Kong Racing. That's a game that expected you to invest hours in the courses, over and over, but it designed it with better controls, better graphics, and more fun all around. Perhaps this game should have just spent more time in the hopper to learn a few more lessons from the best games in the genre before the producers at Capcom let it out in the while. Sadly, this was the version they released, and it was both the first and last time Mega Man was forced into the racing genre. Thank gods for that.