Most game companies are out to make money (we should really say "all game companies", but there may be one or two start-ups simply in it for the love of the craft and not to make money). There's no doubt that corporations have to think about their bottom lines, and the easiest way to rack up money is through franchises. An established series with expected goals, objectives, and play-styles is more likely to be successful than a new intellectual property. This is, sadly, a given. 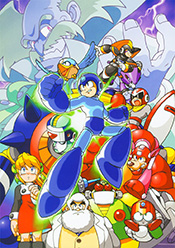 What often happens, though, is that the company will simply start churning out the same title over and over again with minimal changes. Many series have done this, not just Castlevania, with the likes of Sonic, Madden, Call of Duty, and many more all taking a place on the list. Most famously, though, was the Mega Man series.

Through ten official titles (and a new one on the way), two spin-off main-series titles, and a series of Game Boy and Game Gear semi-sequels, the original Mega Man featured the titular blue robot fighting through level after level, defeating bosses (and collecting their weapons), all to go up against the evil Dr. Wily (who never died and never knew when to quit). Although the series started out fresh and interesting (with the "steal a weapon" mechanic being the signature of the series), as the titles marched on the series became less interesting, more of a slog through the "same-old" than broaching new ideas. Of course, part of that is simply due to the frequency of releases: through the NES era alone, Mega Man had six main-series entries (plus four Game Boy entires that reused elements of the main games), all released at a relative rate of one a year.

To put that staggering number into perpsective, there aren't a lot of titles outside of sports franchises that managed to put out games at that rate. Mario only saw three NES entries during that span (and two proper Game Boy entries). Zelda only had two. But the blue bomber (the nick-name for Mega Man) saw a total of 11 titles during that span.

The problem, and the cause of the "Syndrome", is that you can only improve a game so much within a year, especially when you have to come up with new levels, new bosses, new enemies, new power-ups, etc. The games just did not change much from one entry to the next, making the series feel like it was treading water instead of pushing forward.

Of course, the "Mega Man Syndrome" was cemented through all the various spin-off series, each of which eventually fell into the same yearly-release formula.

The "Mega Man Syndrome" is unrelated to another Capcom trend, "Capcom Can't Count".