I want to open this by saying, "wow, how a good show has fallen," but I'm not certain that Titans has ever really qualified as a "good" show. It's had it's moments, certainly, over it's three season run, two of which aired on the failed DC Universe streaming service. But good is probably far outside the bounds of expectations for this poor program. "Decently mediocre" is probably better, largely because so many elements have conspired against this show to make it vastly less interesting than it could have been.

Overseen by Greg Berlanti, he of the great ArrowverseWhen it was announced that the CW was creating a show based on the Green Arrow, people laughed. The CW? Really? Was it going to be teen-oriented like everything else on the network and be called "Arrow High"? And yet that one show, Arrow has spawned three spin-offs, various related shows and given DC a successful shared universe, the Arrowverse on TV and streaming. experiment, and originally aired on DC Universe, this show has always been split down the middle, one side warring with it's obvious CW roots and the other trying to make it into "prestige" television. Although it aired on a service free of constraints, and with presumably a decent budget, the show always felt like it was meant for airing on the CW. In comparison to that network's Superman & Lois, which is absolutely a part of the Arrowverse, which actually felt like it was straining to be more than a CW program, Titans has always felt like it was slouching under expectations, like a high school production given way more money than they should have been trusted with.

That has conflicted with the desire for "prestige", to make this show into something way bigger than it ever could be. Berlanti has made a lot of shows for a lot of networks, not just the Arrowverse on CW but also the Riverdale-verse, Dawson's Creek, Everwood, the new Kung Fu... basically anything that feels teen-ready but has also captured just a bit of the cultural zeitgeist. His biggest production to date was the horrible Green Lantern and while that was a bomb DC is letting him try again with a Green Lantern series on HBO Max. The man is quite prolific but, as you can see from everything he's done, prestige isn't really a word that should be applied. "Budget conscious" might be better.

That is, I think, a big part of the issue with Titans: it's always looking over its shoulder, trying to find a way to stretch dollars to do something ambitious instead of working better within the means to do something relatively epic. That's how you get a season of Titans, this third season that just finished airing, that is so mind bogglingly bad that it felt like I was tuning in just to hate watch the series even though I'm the core demographic this show was made for. I enjoy these characters, I like them in all of the DC ComicsOne of the two biggest comic publishing companies in the world (and, depending on what big events are going on, the number one company), DC Comics is the home of Superman, Batman, Wonder Woman, and just about every big superhero introduced in the 1930s and 1940s. media, but this show is an abysmal train wreck that simply cannot be ignored.

Ostensibly this season is about Dick Grayson, as Nightwing, taking on Scarecrow after Batman leaves Gotham. The was spurned on by the death of Jason Todd (aka, Robin II), but then Jason Todd comes back from the dead, aligns himself with the Scarecrow, and the two team up to take on Nightwing and ruin the good name of the Titans, Batman, and everyone even remotely associated with them. It's Scarecrow's revenge, getting the city worked up in a lather of fear so that they turn on the heroes that have always been protecting them. And, in theory, this storyline could work... in theory. 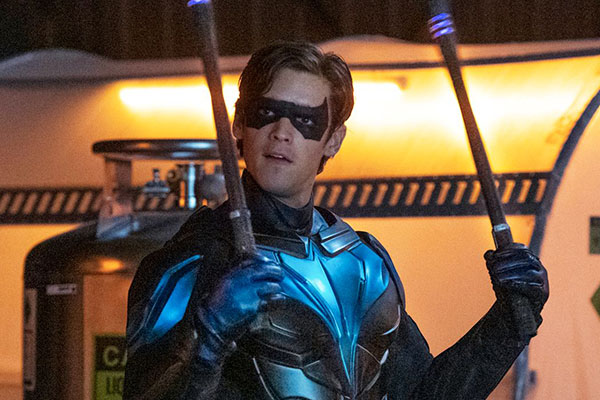 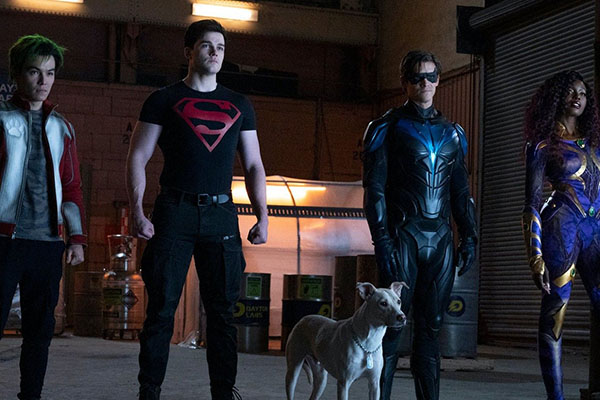 Here's the issue with it, though: to get the characters all lined up to follow this plot line from start to finish, the season has to rush through story beats, twisting characters in pretzels to get them to think, act, and follow stories that, before, they would have been too smart to even bother with. Bear in mind none of these characters were smart to begin with, and they've done stupid things time and again over the course of the previous two season, but here it's like they were all repeatedly hit on the head with a baseball bat and then told to run a rat maze as fast as they could. It's idiotic yet overly stuffed with content to the breaking point.

As just one example: Jason Todd dies, comes back, starts going around as the Red Hood, is revealed to be after the Scarecrow, is revealed to be working with the Scarecrow, goes on the run from the GCPD, and somehow pins it all on Dick Grayson. All this in the span of just three episodes. It's absolutely ridiculous. And to even get to that point we had to have Jason commit several murders while the Titans are unable to get their heads out of their asses, falling for his plans time and again.

Bear in mind that Jason is an idiot. Even by the standards of this show, all the characters think the guy is a moron. So when he's somehow able to outsmart a group of heroes, one of whom was trained by the world's greatest detective, it does stretch credulity. The way the show tries to write around it is that Scarecrow was using Jason and managed to twist his mind and, from behind the bars of Arkham Asylum, plot and scheme and put his whole plan into motion. Except, the second Scarecrow gets free he acts like an idiot, too. The show has to make big leaps of logic, and give the character information there would be no way he could have (even working with Jason) to pull of his schemes. In essence, because everyone is an idiot, the show has to cheat to keep the plot moving.

Beyond that, the show is always rushing around with all its plot points that too often the characters are lost in their own stories. Hawk and Dove, for whatever reason, break up and then get back together in the first few episodes and after (spoiler) Hawk dies, Dove leaves to go sort out her stuff... and then never comes back again. Wondergirl comes back from the dead and it's largely just, "oh, hey, you're here," without any of the promised further drama or consequences. Raven is missing for most of the season so she can learn to harness her dark powers and then, when she shows back up, she just has then under control like it's no big deal, all the character development potential thrown right out the window. And there's poor Beast Boy who has absolute no character development at all, his character starting and ending the season essentially right back in the same place. 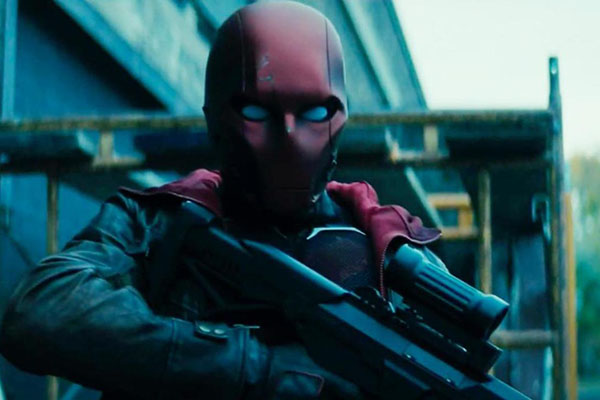 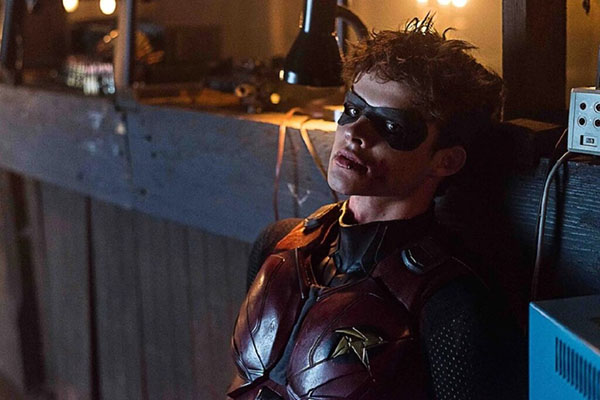 Those few characters that are the focus of the season -- Dick and newly brought in Barbara Gordon, Starfire and her recently arrived sister Darkfire, Jason and Scarecrow -- fail to do anything or learn anything of value from their interactions. Generally character meet, they say a few quick lines, and then suddenly they've moved on as if a whole year's worth of character development happened. You can't get a grip on them as people because they don't act like people; they're just bland pieces moving around a board so the next "climactic" moment can occur. And then, when it seems like Scarecrow has dug so deep a hole the heroes could never escape, magically they just reverse everything in twenty minutes and the day is saved. It's beyond stupid, it's flabbergasting.

It's so bad you'd think everyone involved would want to bury this series and pretend the third season never happened. "Titans? That show ended years ago, right? Two seasons, never returned. Decent ride but it ended when it needed to." Nope, it's coming back for a fourth season that, if the progression of these seasons has been any indication, will be ever worse than what we were just subjected to in season three. There aren't a lot of shows that I think need to be canceled more than Titans, but somehow it just keeps plugging along.

Thing is that I find it hard to truly hat every aspect of the show. The cast is actually pretty good, a charismatic bunch that have a lot of potential in their performances if the show would just rise to the occasion. And the production values are solid, a step above Superman & Lois, and that show is the best looking thing in the Arrowverse by a large margin. It's just that the show doesn't know what to do with all the elements that work, instead trying to cram in 22 episodes worth of Arrowverse content into a 10 episode prestige season. It can't function under the strain.

If Titans is just going to keep going, on and on, then the fact is that it needs to find a way to actually be good, or even tolerably mediocre. A new team needs to be brought in behind the camera to give the show a fresh feel. The writers need to be changed, the directors need to be changed, and the show-runner absolutely needs to be fired off the set. Find someone that can do a lot with a little and knows how to tell a tight and cohesive story over ten episodes. Until that occurs, Titans is going to be among the worst things on television, streaming or otherwise.