Well, When You Cast Sean Bean...

I never managed to get into the Song of Fire and Ice books. People kept recommending them to me, and I'm always down to find some new long-form series i can get into. High fantasy hasn't really ever been my thing, but I do enjoy period pieces, and the books sounded more like historical fiction than high fantasy. Sure, there were dragons and zombies deeper into the run, but at the start it's just a bunch of warring factions fighting petty wars. I can get behind that. 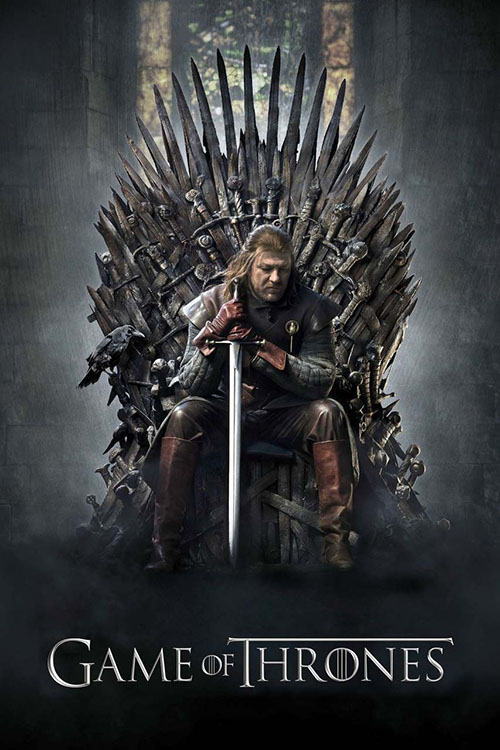 I did read the first book, A Game of Thrones, long before there was even a plan to adapt the novels into a television series, and I thought it was pretty good. A tad slow at the start, sure, but once it picked up (and the various factions in the novels went to war), it got pretty good. By the end of that first novel I was digging on the battles, the blood, the constant battling between the various rivals. It worked really well for me. Then I opened up book two, A Clash of Kings, and I lost interest -- everything slowed back down again and it, once more, became a slow and plodding court drama. Don't get me wrong, the drama is good at times, but after all the build up for a war I didn't have it in me to get stuck back in the quagmire. I set down that second book and never looked back.

And why should I when a television series that (mostly) adapted the books arrived on HBO a few years later. Game of Thrones basically gave me the story I wanted without it being nearly as slow for me to get through it -- a single season is ten hours of viewing for the same story it would take me weeks to read through. The math on that is easy. Sure, some will say that the books are better than the show and I won't deny that, probably in places, that's true. I'd just rather not have to slog through them to find out when the episodes are right there for me.

At least in this first season the story seems pretty close to the original novel. The show, at this point, essentially divides up into four major storylines (although expect these to splinter and fracture as we go along). At the start is House Stark, wardens of the north of Westeros (one of three main continents on the world and the center of most of the conflict). When the king of the seven kingdoms, Robert Baratheon, comes calling for the leader of house Stark, Ned, to serve as his Hand (essentially his primary counselor), Ned feels obligated to accept. He then travels south with his two daughters, court-ready Sansa and tomboy Arya, to serve in the court at the Red Keep. Meanwhile, Ned's three official sons -- Robb, Bran, and Rickon -- stay home in Winterfell with their mother, Catelyn, While, Ned's bastard son, John, has gone north to the great Ice Wall to join the Night's Watch and serve as a protector of the kingdom.

Bran Stark, it should be noted, had just fallen (read: been pushed) from a high window of the keep and nearly died. He was pushed because he saw something he shouldn't have: the Queen, Cercei, screwing her own brother, Jamie. If that knowledge was known if would prove that all of the children had by Robert and Cercei were actually illegitimate and it would throw the entire line of succession into question. Ned, while serving at the court, eventually figures this out. When the King dies, Ned tries to have Robert's eldest son, Joffrey (a vile little shit, it should be noted), removed from the throne. Instead, Ned is tried for treason. This then leads to the armies of the north turning their banners against the south, and all out war begins across Westeros. 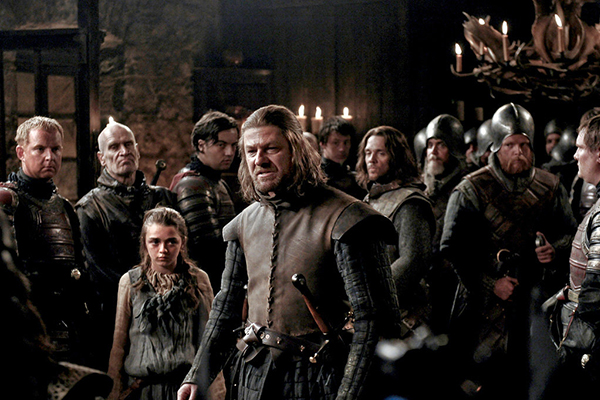 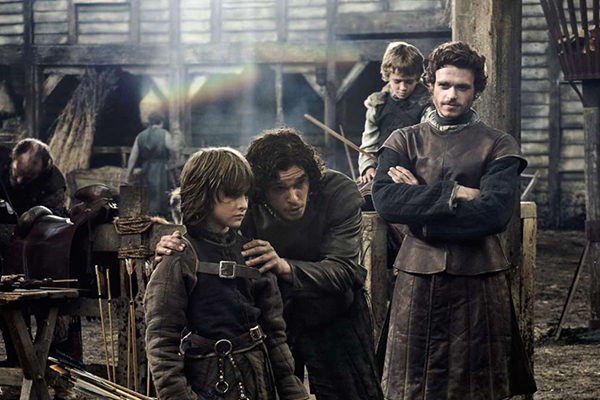 Oh, and while this is going on we also have events in the east. See, 17 years earlier, Westeros was ruled by the Mad King, Aerys Targaryen. He ruled the entire continent, but once he went batshit crazy, various factions went to war to depose him. He was killed, as was most of his family, and only two of his children, elder son Viserys and younger daughter Daenerys, escaped. They fled to Essos where they have lived, with Viserys now marrying off his sister to Kahl Drogo, the leader of the Dothraki (read: Mongols) so they will provide him with an army he can use to invade Westeros and reclaim the throne for Targaryens.

Bear in mind there's more to that plot than what we just summarized. A lot more. That's part of the fun of watching this show, with all the dense little plot lines tying in and around each other as we bounce back and forth across the continents. Realize, of course, that you're not going to get a whole lot of resolution come season's end as Game of Thrones is plotted as one large continuous story. If you're starting in now before the eighth and final season airs later this year, you're in for a long story with a lot of big, shocking moments but none of the factions really reaching their end points by the time the seasons end. We won't get a resolution to all the big plot points until the end of Season 8, so it's best to rip that band-aid off now before we get in.

If you feel like you're up for what will essentially amount to a 73-hour-long movie, then there's a lot to enjoy about Game of Thrones. As I noted at the start, this series begins as a fairly grounded period piece. Sure, there are hints of greater dangers to come -- an attack on a party of Night's Watchmen by some ice zombies sets off the whole series -- but this is largely a court-and-war drama set against a fictional background. It's a mirror-reflection of our own Middle Ages (or, at least, the show-runners' interpretation of the author's vision of the Middle Ages), with all the swords-and-armor action you'd expect. It can be quite thrilling at times, from the backstabbing of the court to the actual stabbing on the battlefield.

The show is quite merciless in this regard as characters are regularly disposed of in grisly fashion all to move the plots forward. I've read more than a few sites over the years that have regularly tracked who died, week-to-week, and it's easy to expect that any character you know, anyone you like, could be bumped off fairly quickly as they play the game of thrones. You're going to have to be okay with a lot of blood and violence if you sit down to watch this show because it certainly isn't going to spare anyone's feelings on the matter. 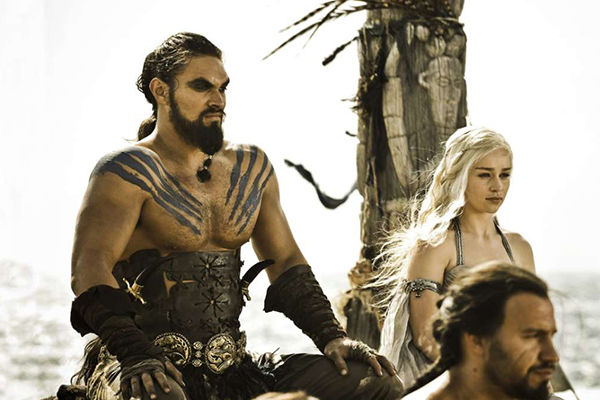 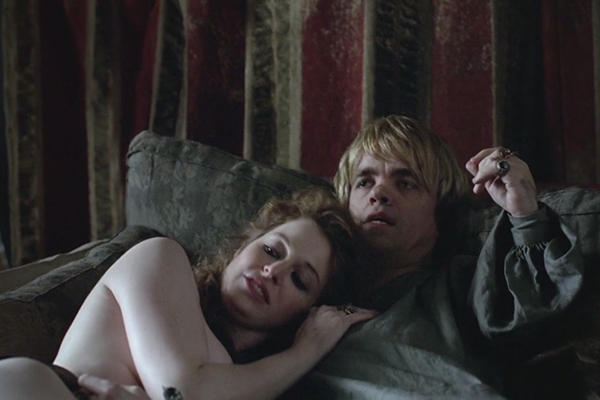 You'll also have to be okay with a lot of sex and nudity. People get busy regularly on the show, and bare chests, asses, and crotches are all on display on a regular basis. Certainly the show doesn't mince feelings on the mater, and for some scenes it does feel fairly realistic. People had sex, and got naked, back in those times (just like they do now) so to shy away from the topic is disingenuous at best. It's always seemed silly to me when shows try to act mature about language and violence, but the second anything bedroom related comes up, the show has to cut away like a tittering pre-teen. These subjects should all be given equal measure (or none at all) so I appreciate that Game of Thrones is as comfortable with sex and nudity as it is language and violence.

That said, sometimes the show can be a little too comfortable giving into it's prurient interests. It does feel like the show sometimes strays into violence or nudity to get a rise out of the audience, to shock them rather than simply set a scene. Plenty have commented about the gratuitous nature of some of the scenes (and there are plenty here in the first season that I could point out, right from the first episode), and it's not something the show has ever gotten better about. How much this bothers you is up for you to decide.

For me, I appreciate the realism of all of it. The violence ties in to the drama, the drama sets the stage for the various twists and turns, and everything comes together in a number of great set pieces. By the end of the season there are a number of shocking twists and turns, and the last scenes set the stage for a lot of big movements to come. The show certainly gets firing on all cylinders by the last episode of the first season, and if you make it this far there's no question you'll be back to find out what happens in Westeros and Essos moving forward.

And I promise, the next season won't be the slog like the second book.

Although some people were shocked by his death, others knew it was coming. Certainly if you read the first book (or just knew the oeuvre of Sean Bean), you should have seen Ned Stark's beheading coming in the ninth episode. Sean Bean's characters rarely live to the end of a movie or show, and Ned's death is a key moment for the show moving forward.

After her husband, Kahl Drogo, dies, Danerys has his body burned (as is the way of the Dothraki). She'd been given three dragon eggs as a wedding present, pretty stone things that had never hatched. She sets the eggs in the fire with the Kahl's body, and then walked into the fire after. We'd already gotten hints that heat didn't bother her, but to see her sitting in the ashed come morning, three baby dragons curled up around her, was a huge moment.

Tyrion Lannister. As played by Peter Dinklage, Tyrion is a charismatic, funny, enjoyable character. I'm pretty sure, every season, he'll be the winner of this category.